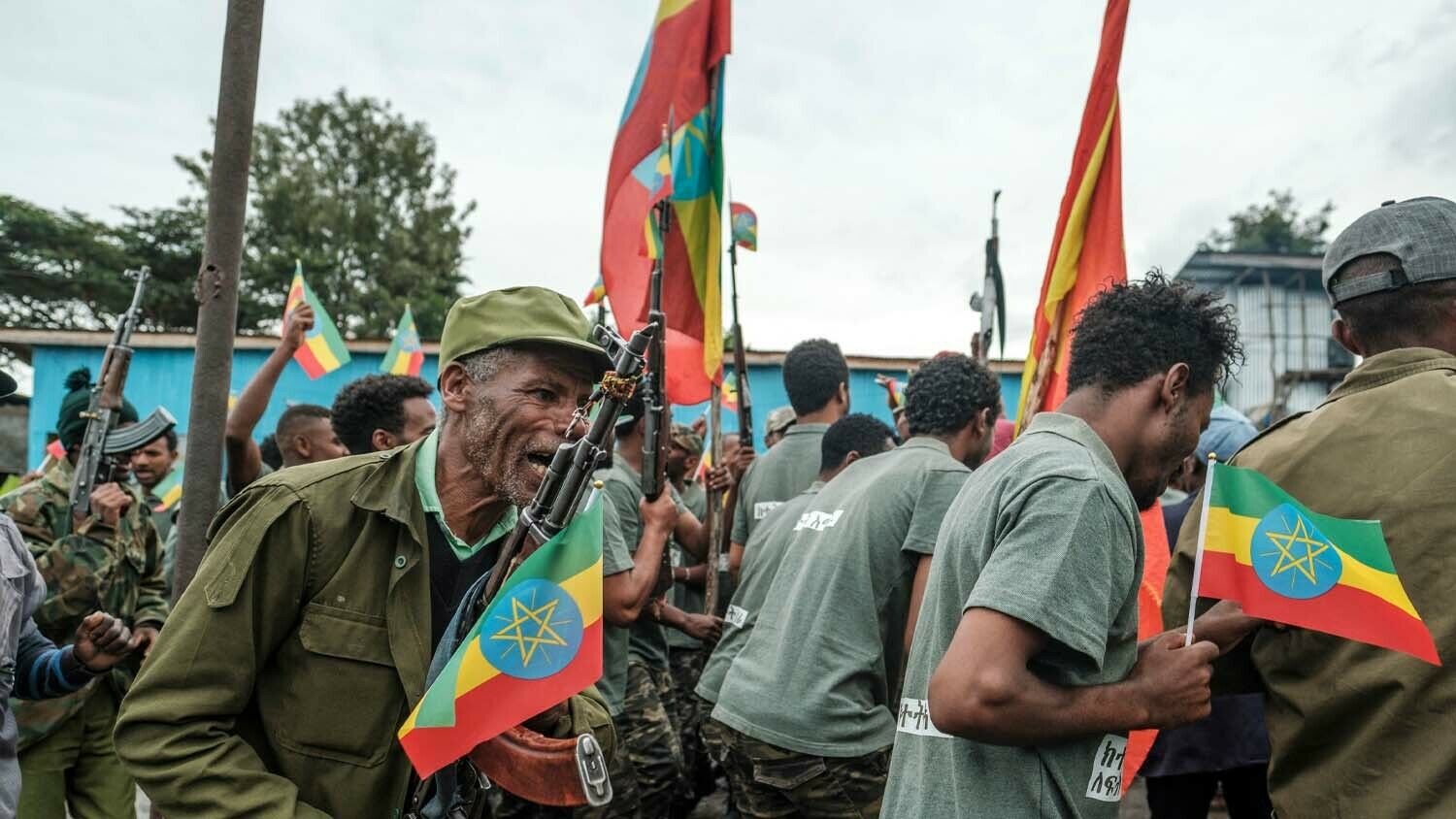 Recruits for reserves of Amhara regional forces, together with members of the Amhara militia, celebrate during their graduation ceremony, in the city of Dessie, Ethiopia, on August 24.
EDUARDO SOTERAS/AFP/Getty Images

A war in Africa is having global consequences.

Ethiopia’s war against the Tigray rebels is capturing the world’s attention. Ethiopia’s civil war started as a local issue. Now, however, it is drawing in foreign players from the rest of Africa and beyond.

Within the Horn of Africa, Eritrea and Djibouti are being brought into the conflict. Djibouti supports the Ethiopian government but so far isn’t (that we know of) sending troops across the border. But Eritrea has had soldiers in Ethiopia for some time.

Eritrea used to be a part of Ethiopia. It broke away in the 1990s, taking all of Ethiopia’s coastline with it. Since then, Eritrean President Isaias Afwerki has ruled the country with an iron fist. His regime is so draconian that Reporters Without Borders ranks Eritrea last, even behind North Korea, on their 2021 World Press Freedom Index. They write in Afwerki’s profile that any “attempt to question or challenge the regime is regarded as a threat to ‘national security.’” Since independence, Eritrea has gone to war with literally all of its neighbors.

Ethiopia and Eritrea had a war where about 100,000 people died; a ceasefire ended the conflict, but the two countries were still on cold terms. Yet in 2018, Ethiopian Prime Minister Abiy Ahmed stunned the world by making peace with Eritrea. He even won the Nobel Peace Prize.

That a brutal dictator like Eritrean President Isaias would suddenly have a change of heart was remarkable. Eritrea’s involvement in the Ethiopian civil war may show what Abiy offered him behind the scenes.

The war started when the government invaded the Tigray region last November. The Tigray People’s Liberation Front (tplf) ruled the country until 2018. This is despite the Tigray ethnic group being 5-7 percent of Ethiopia’s population. 2018 was the year Abiy, an ethnic Oromo (Ethiopia’s largest ethnicity, at about 35 percent), was elected. Yet despite the Tigray’s small population, they have a formidable army and posed a threat to Abiy’s power. The tplf were no friends to either Abiy or Isaias. What brought the two leaders together may have been a mutual desire to snuff out the tplf.

Eritrea denied for months that their soldiers were in Tigray. But Abiy admitted working together with Eritrean troops in March. They withdrew in June but have since come back and are occupying Tigray territory.

This comes at the same time as large numbers of Eritrean troops, with tanks and artillery, cross the border. Both the U.S. and the European Union have expressed concerns.

There are also reports that Abiy visited Eritrea on August 17 in an unannounced meeting.

But it isn’t only Eritrea that’s getting involved in Ethiopia. Abiy visited Eritrea en route to Turkey. Turkish President Recep Tayyip Erdoğan has been interested in what’s happening in Ethiopia.

Abiy had his meeting with Erdoğan on August 18. In the meeting, Erdoğan affirmed his support to a peaceful resolution to the Tigray crisis. He also offered to be a mediator for Ethiopia’s border dispute with neighboring Sudan.

Erdoğan already has good relations with Ethiopia. A few years back, the University of Addis Ababa gave him an honorary doctorate. He also commissioned the restoration of a historic Ethiopian mosque supposedly the final resting place of Najashi, a prominent Ethiopian king in Muslim tradition. The Turkish government has even advocated for Najashi’s tomb to be put on the route for the Muslim pilgrimage to Mecca.

Abiy’s association with Erdoğan is especially noteworthy. Ethiopia is a majority-Christian nation with a sizable Muslim minority. Erdoğan is a committed Islamist. He supports Islamist groups Hamas in Gaza and the Muslim Brotherhood in Egypt. He converted the Hagia Sophia from a museum to a mosque. He has a reputation as being a perennial “Israel harasser.” He supports the new Libyan government, which also has connections to the Muslim Brotherhood.

Abiy belongs to the Oromo ethnicity, which is majority Muslim. But he is a Pentecostal. So why is he looking to get support from an Islamist?

One reason is that relations with Ethiopia’s traditional partner, America, is faltering. The American and Ethiopian militaries collaborated on anti-terrorism operations in neighboring Somalia. But U.S. sanctions are starting to hurt Ethiopia. Ethiopia’s foreign ministry earlier this year stated that the nation could be “forced to reassess its relations with the United States, which might have implications beyond our bilateral relationship.” Andargachew Tsege, one of Abiy’s advisers, urged protesters to burn American flags outside the U.S. Embassy in Addis Ababa. The embassy took the threat seriously, advising Americans to stay away.

The U.S. and EU are already angry with Abiy. Russia is far away. China may be considered too untrustworthy. An Islamist power like Turkey may be one of the only options Abiy has left.

This all comes as Abiy takes his country to total war.

This shows that Abiy is willing to do whatever it takes to destroy the tplf once and for all. Even if it means putting the entirety of Ethiopia’s able-bodied population into the military. Abiy so far hasn’t implemented conscription. But his statement suggests this may not be too far down the line.

Ethiopia has Africa’s second-largest population, at over 100 million people. Abiy has a lot of potential soldiers to pick.

Tigray people—even those not affiliated with the tplf—are also getting attacked throughout the country. Hundreds of Tigray have been arrested, with the arrests accelerating after a recent successful tplf offensive. Combine this with accusations that Abiy is obstructing foreign aid groups from reaching Tigray, leaving hundreds of thousands at risk of a manmade famine. It seems like then Ethiopia is on the verge of ethnic cleansing.

The most infamous episode of this was in Rwanda in the 1990s during the Rwandan Genocide. But Ethiopia is a lot bigger than Rwanda. Any ethnic cleansing in Ethiopia would capture the world’s attention even more so than Rwanda’s.

To add one more wrinkle to the Ethiopian situation, let’s look at Sudan.

Sudan shares a small border with the Tigray region. Refugees have been pouring into Sudan, fleeing from the civil war. Estimates of their numbers vary; Voice of America lists about 60,000 as of July 28. Sudan isn’t in a good political situation as is, anyway. It is still recovering from the coup against its longtime dictator Omar al-Bashir. A steady stream of Ethiopian refugees will only exacerbate Sudan’s problems.

But it’s not just the refugees who are crossing the Sudanese border. So are soldiers.

There have been several incidents between the Sudanese army and Ethiopian soldiers throughout the year. Khartoum reported an Ethiopian “trespass into Sudanese land” in February. In March, Sudan took advantage of the chaos in Ethiopia to send troops to a territory disputed between the two countries. Sudan accused an Ethiopian militia of kidnapping a Sudanese military commander in July, prompting a border closure and military buildup on both sides of the border.

Ethiopia also contributed to a United Nations peacekeeping mission in Sudan. Due to the current standoff, Khartoum asked the UN to remove the Ethiopian troops this month. The UN agreed.

It’s pretty clear that what was a local issue for Ethiopia in November is spiraling out of control. And it’s impacting not just Ethiopia, or even the Horn of Africa, but the world at large.

Did you know that Ethiopia’s current global impact was prophesied in the Bible?

Longtime Trumpet readers would be familiar with a prophecy located in Daniel 11: “And at the time of the end shall the king of the south push at him: and the king of the north shall come against him like a whirlwind, with chariots, and with horsemen, and with many ships; and he shall enter into the countries, and shall overflow and pass over. He shall enter also into the glorious land, and many countries shall be overthrown. … He shall stretch forth his hand also upon the countries: and the land of Egypt shall not escape. But he shall have power over the treasures of gold and of silver, and over all the precious things of Egypt: and the Libyans and the Ethiopians shall be at his steps” (verses 40-43).

Most of Daniel 11 discusses events that are ancient history (you can learn more about that by reading History and Prophecy of the Middle East, by Trumpet executive editor Stephen Flurry). But this portion of prophecy is dated for our time today. Daniel describes this as a time when global travel would be easier than at any other time, coinciding with a knowledge explosion (Daniel 12:4). He also described it as time when weapons more destructive than anything mankind had seen to that point would be around (Daniel 12:1; compare with Matthew 24:21-22). This describes world conditions today.

But who is the king of the south?

It’s a country located to the south of Europe. Its proximity to Egypt, Libya and “the glorious land” (modern Israel) shows that it is somewhere in the Middle East. It’s a “king,” or regional power. It has a “pushy,” provocative, foreign policy. Verse 44 shows countries that will be in league with the king of the south, implying that it has a large proxy empire stretching over the Middle East and North Africa.

For decades, we’ve pointed the finger at one country in particular: the Islamic Republic of Iran.

Iran has a powerful military and sizable economy. It has a proxy empire including places like Iraq, Syria, Yemen, Gaza, Lebanon, Somalia and now Afghanistan. It is the number-one state sponsor of terrorism in the world. Its regular chants of “death to America” and “death to Israel” show it is no friend to the West and Western values. It is the country more moderate Middle Eastern states fear the most.

Ethiopia is included in the prophecy as a proxy of Iran.

We’ve been watching for Ethiopia to fall to the Islamic Republic for years now. Ethiopia is a majority Christian nation. For years, this forecast looked unlikely. That changed with Ethiopia’s civil war.

One aspect of this is the tplf’s alliance with the Oromo Liberation Army (ola). The ola is a secular, socialist-leaning group. But they represent the Oromo, Ethiopia’s largest ethnic group, which is mostly Muslim.

Abiy is also an Oromo. He’s a Pentecostal, but that’s not stopping him from openly working together with Turkey and its Islamist president.

So, whether it is with the rebels or with the government, we are seeing Islam get more and more influence. And the Ethiopian government is also turning away from its traditional friend, America. This is also implied in the Daniel 11 prophecy.

Eritrea, like Ethiopia, is majority Christian. But we’re seeing it get entangled into Ethiopia’s civil war more and more. How the war ends for Ethiopia will also impact Eritrea.

We’re also seeing Djibouti get involved in the conflict as well. The Afar ethnic group in Ethiopia is fighting with the Tigray. The Afar make up 30 percent of Djibouti’s population, and Djibouti’s Afar people are showing solidarity with their brothers across the border. The Tigray are trying to capture the highway between Djibouti and Addis Ababa, Ethiopia’s capital, which controls 95 percent of Ethiopia’s trade.

Much still has to happen before Ethiopia officially joins Iran’s ranks. But, as Ethiopia’s civil war drags on and more countries become involved, Daniel’s prophecy comes closer and closer to being fulfilled.

To learn more, request a free copy of The King of the South. Also, Libya and Ethiopia in Prophecy gives context as to how Ethiopia specifically fits into the king of the south prophecy. Request your free copy today.