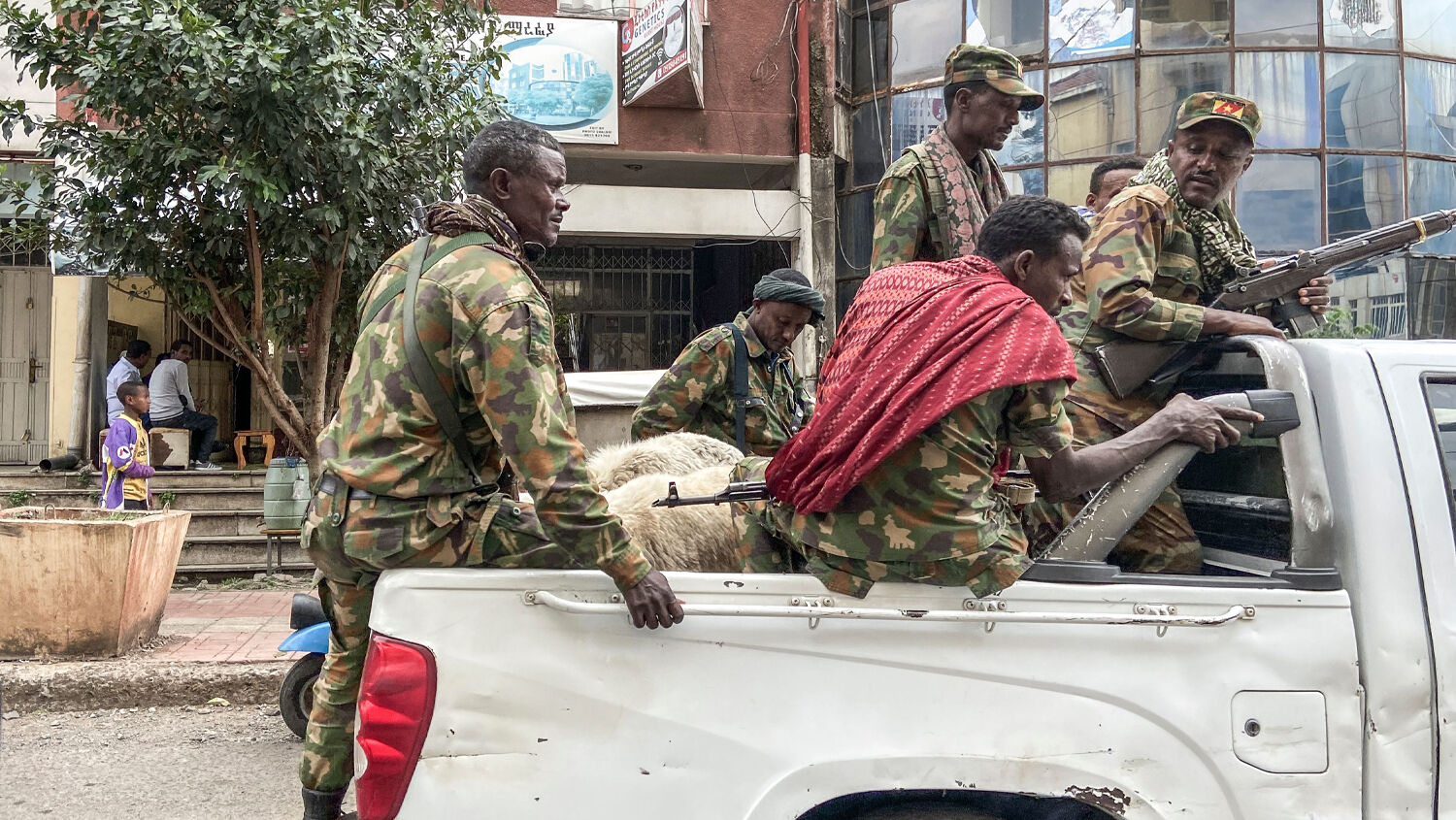 Members of the Amhara militia fighting alongside federal and regional forces against the northern region of Tigray ride through the city of Gondar on November 8.
EDUARDO SOTERAS/AFP via Getty Images

Here’s a surprising lesson I’ve learned working at the Trumpet: If you want hate mail, write about Ethiopia. It may not sound controversial, but I can think of no other subject that so consistently brings in angry replies.

Our forecast on Ethiopia is unusual; it’s based solely on Bible prophecy and, until recently, shared by no one else. For years, we’ve been saying that Ethiopia would become dominated by radical Islam, led by Iran.

On the face of it, that makes little sense. Ethiopia is a Christian country with fewer than a third of its population Islamic. Its leader is a Christian. The previous leader was Christian. Just about all of its leaders have been Christian. It is Africa’s second-most populous country—certainly not some small nation that would be easy for Iran to bully.

So many readers have been quick to rubbish the claim. “Forget your expectations of Iran getting a foothold in Ethiopia of the highlands,” reads one typical response. “That is just a myth.” Another wrote in, on a completely different article, saying, “Let us see if it is more accurate than your ‘An Islamic Takeover of Libya and Ethiopia Is Imminent’ article.”

Over the last few weeks, Trumpet editor in chief Gerald Flurry has made another highly controversial forecast: Donald Trump will remain president of the United States. Almost everyone disagrees with us. Many of the facts seem to point the other way. With Trump’s lawyers defeated in key lawsuits and the General Services Administration paving the way for a Biden presidency, most even on the right are saying it’s over.

As we wait to see what comes next, it’s worth asking: How did that Ethiopia forecast turn out?

First, it’s critical to understand why we made that forecast. It’s not because we have a superior knowledge of the region. In fact, most of our critics are from Ethiopia. Instead, it’s because of what God reveals in His Bible.

This prophecy describes Germany defeating Iran. Verse 43 tells us that Germany will go on to invade Libya, Ethiopia and Egypt. The implication is that these powers are aligned with Iran and with radical Islam—making themselves a target for German invasion.

Right now, Ethiopia is descending into civil war. The main conflict revolves around one of its most powerful tribes, the Tigray. Thousands have fled across the border to Sudan, while reporters on the scene document massacres against civilians.

Religion is not the cause of the crisis. But already some fear that radical Islam could take advantage of it. Desta Heliso, an Ethiopian journalist living in London, wrote an article titled “Ethiopia’s Increasing Vulnerability to Islamic Extremism and What That Means for the Horn of Africa.” “There are some forces within and outside Ethiopia that Ethiopia’s ‘historical’ position as dar al Islam or ‘land of Islam’ must be reclaimed,” he warned. In Muslim tradition, ancient Ethiopia protected early Muslims. Some even claim that the Ethiopian king, known as the Negus, converted to Islam, and so the country is rightfully Muslim. Today, Muslims abroad promote this view, with Turkish President Recep Tayyip Erdoğan pushing to have the tomb of the Negus added to official Muslim pilgrimage route.

“There are some who hope that Turkey’s proposal, along with other activities, would pave the way for Ethiopia to reclaim her status as a land of Islam,” wrote Heliso. “The resulting effect is that Islam would be able to march towards southern Africa unhindered.”

Heliso sees another regional flashpoint—the Grand Ethiopian Renaissance Dam (gerd)—playing into the religious divide. Egypt fears the dam will deprive it of much-needed water and has even threatened to bomb it. “Currently, radical Islamists within Egyptian government, opposition political parties and other groups seem to be capitalizing on the current tension between Egypt and Ethiopia over gerd and internal political discontent,” wrote Heliso. “The main goal in all this is not only in undermining the gerd project, but rather it is promoting an extremist religious vision, at the center of which is seeing an Islamic state in Ethiopia.”

Egypt and Turkey aren’t the only Muslim countries eyeing Ethiopia. “Arabian and indeed all Muslim states view Ethiopia as the most strategic state in the Horn of Africa,” wrote Heliso. “It is in the same way that radical Islamists view Ethiopia.”

Internally, Islam is also rising. “Over the last 30 years, Islam has grown in confidence and in number in Ethiopia,” he wrote. “Tens of thousands of mosques have been built in the country, Muslim businesses have grown, and an Islamic bank was established recently. Extremist tendencies, centering on Wahhabist teaching, have also grown.”

Much of this growth has occurred within the Oromo people—Ethiopia’s largest tribe. Oromos are split between Islam and Christianity. But, as Heliso explained, “there are many within the Oromos who believe that political processes must center on the fusion of ethnic identity with Islam. These are ethno-religious extremists for whom a true Oromo is a Muslim. Radical elements have used this misguided perspective to incite violence against Christians. As a result, since 2015, many Catholic, Orthodox and Protestant churches and institutions in the Oromia region have been destroyed. Hundreds of Christians, including Oromos, have been brutally murdered. It is alleged that these radical elements within Oromia are supported by outside forces, particularly in Egypt.”

So, our forecast for Ethiopia is looking a lot more probable.

The emphasis here in [Daniel 11] verses 42 and 43 is on Egypt—then we have Libya and Ethiopia. This shows that Egypt is the big conquest! It is the real power behind Libya and Ethiopia, which suggests that it is going to have a heavy hand in swinging those two nations into the Iranian camp.

Put simply, this means that we can expect Egypt—with Iran’s help—to lead Libya and Ethiopia into the Iranian camp! …

Here’s what Barnes’ Notes says about this passage: “A conquest of Egypt was almost, in itself, a conquest of Libya and the Ethiopians.” That’s exactly right! The real powerhouse here is Egypt. Iran and Egypt are going to work together to swing Ethiopia and Libya into that Iranian-led “king of the south” camp—and they’re going to do it with a lot of violence! They’re very good at creating violence.

Ethiopia, therefore, will probably not move into the Iran camp until after Egypt has.

But the current turmoil lays the groundwork for that shift. If Libya and Ethiopia have both descended into anarchy, it will be easy for Egypt to bring them around. Egypt is already working with Muslim groups in both countries. Our forecast is looking feasible.

Some in Ethiopia have condemned us for wanting Ethiopia to side with radical Islam. They point out that massive amounts of suffering would come with such a shift. But our forecasts are not based on what we want to happen—they’re based on what the Bible says will happen.

The same is true for our forecast on President Trump. As Mr. Flurry explained in his article “Why Donald Trump Will Remain America’s President,” we make that forecast “because a Biden presidency is contrary to Bible prophecy.”

This at the heart and core of our message. Our analysis, our experience, what we want do not matter at all—compared to what God says. What we think about the future of Ethiopia doesn’t matter—what God says does.

And the same is true with all the Bible’s instruction. It doesn’t matter what we think will make us happy, or what some expert tells us. The only way to live a happy, fulfilling life is to do what the Bible says. The book of Daniel, which contains this prophecy of Ethiopia, is not simply a book about coming news events. The name Daniel means “God is my judge.” That book is full of examples of individuals who looked to God, not men, no matter how dire the physical circumstances around them.

It has taken some years to see events shift in Ethiopia—and the journey isn’t over yet. There may be some unexpected twists and turns. But now you have an opportunity to watch the fulfillment of Bible prophecy over a much shorter time frame. It’s just a matter of weeks until January 20, when Joe Biden is supposed to be inaugurated. Watch what happens with our Bible-based forecasts.

And after you see prophecy fulfilled, let that change your life. Daniel and his three friends, Shadrach, Meshach and Abednego, obeyed God despite being thrown to the lions or shoved into a fiery furnace.

Fulfilled prophecy helps us learn the same lesson they learned. “It takes a lot of faith to put your life in God’s hands. … Yet that is the whole theme, or motif, of Daniel: God is my judge,” writes Mr. Flurry in his booklet Daniel Unlocks Revelation. “In every chapter, God promises vindication: He assures us that He will deliver His people if they are faithful. This book is also filled with most impressive examples of how God vindicates His people in trial. God fulfilled His promise every time—never once did He fail.”

It doesn’t matter if God is telling you what will happen in Ethiopia, who will be the next president of the United States, or how you should live your life—His promises never fail. Seeing God’s Word proved true should change our lives. Watch what happens in Ethiopia and the United States. Let those events impress you with the power and value in God’s revealed truth—to the point that you act on those words and change your life.