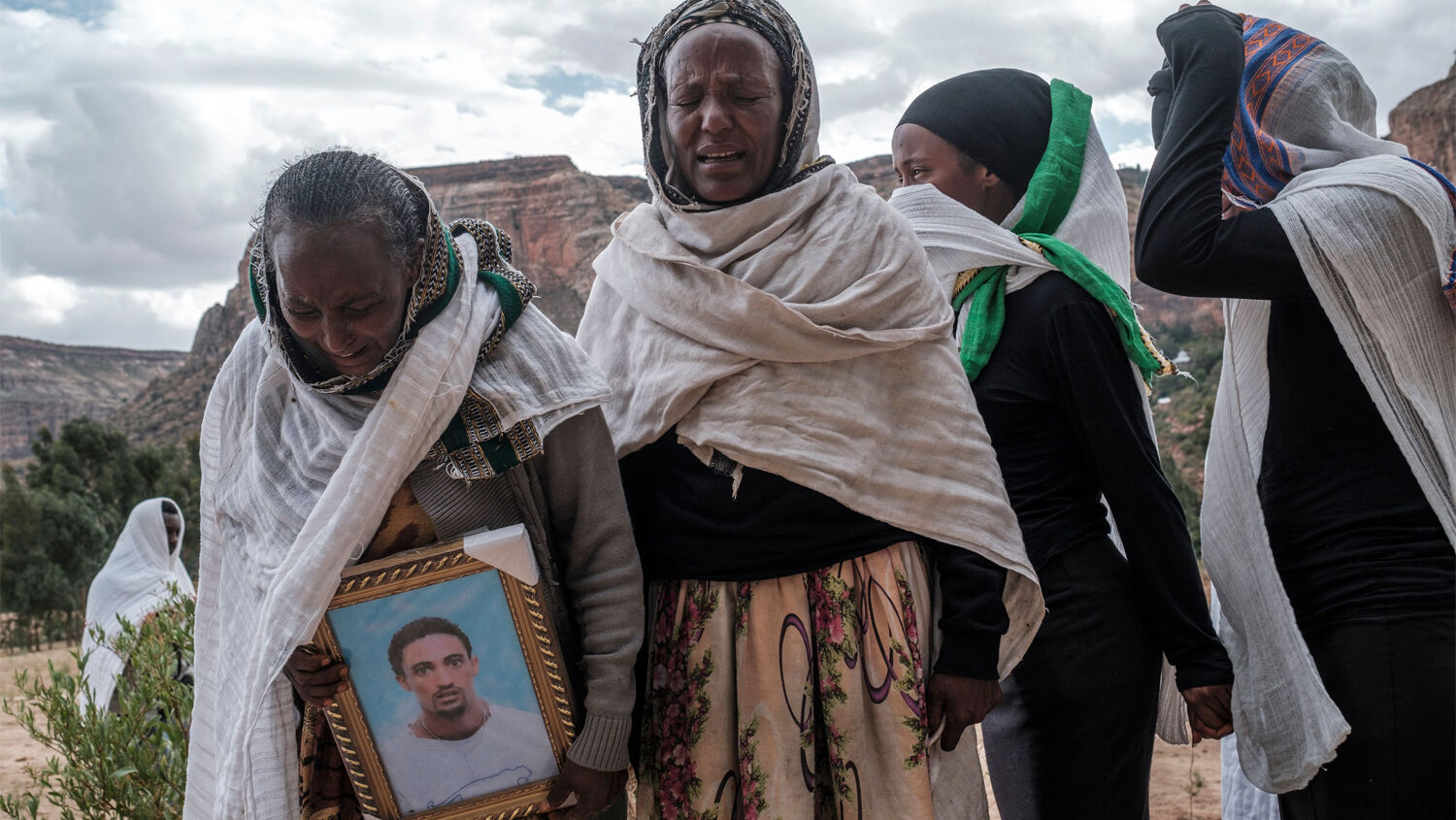 People gather on February 26 to mourn the victims of a massacre allegedly perpetrated by Eritrean soldiers in the village of Dengolat, north of Mekele, the capital of Tigray.
EDUARDO SOTERAS/AFP via Getty Images

The U.S. is losing ground in the Horn of Africa.

Ethiopia and the United States are having a diplomatic spat in the context of Ethiopia’s civil war. They are normally close military partners, but in November the Ethiopian government began cracking down on the Tigray ethnic group. Since then, allegations of human rights abuses against Ethiopian Prime Minister Abiy Ahmed and his allies have been frequent. The U.S. is pressuring Ethiopia to change course, provoking an Ethiopian response.

Research by the Telegraph suggests that the Ethiopian government, or an affiliated group, is using white phosphorus against civilians. White phosphorus is a highly combustible substance that ignites upon contact with air. It burns at over 4,892 degrees Fahrenheit and sticks to skin. It’s been compared to napalm in its deadliness. It isn’t classified as a chemical weapon per se. It is even legal under international law in certain applications, like lighting up a battle zone at night. But using it against humans as a weapon breaks the Geneva Convention and can constitute a war crime. The research is compelling enough that the United Nations is demanding a full inquiry.

The allegations of using white phosphorus are among the worst, but they’re not the only ones. The U.S. government accused Ethiopia in February of ethnic cleansing against the Tigray. According to its report, “[W]hole villages were severely damaged or completely erased.” Amnesty International accuses troops from neighboring Eritrea, an ally of Prime Minister Abiy, of civilian massacres in the city of Axum.

Such allegations prompted the U.S. government to put sanctions on Ethiopia, including foreign aid cuts and travel restrictions on certain Ethiopians.

This is all on a country that is supposed to be an American ally. The U.S. State Department calls American aid to Ethiopia “one of the U.S. government’s largest and most complex assistance programs.” The American and Ethiopian militaries supported each other fighting radical Islam in Somalia.

Ethiopia’s Foreign Ministry said in a statement that the country could be “forced to reassess its relations with the United States, which might have implications beyond our bilateral relationship.”

Could Ethiopia flip from being America’s partner to a country that causes America problems?

Andargachew Tsege, one of Abiy’s advisers, urged protesters to burn American flags outside the U.S. Embassy in Addis Ababa. The embassy took the threat seriously, advising Americans to stay away.

Then there is the eviction of New York Times reporter Simon Marks. Marks was first stationed in Ethiopia in 2019. Much of his coverage has been critical of the Ethiopian government. The government removed his press credentials in March and deported him this month, despite his residency permit being good until October. The authorities didn’t give a reason for his deportation.

“Journalists have become targets of authoritarian leaders around the world who want to operate in the shadows and escape accountability for their actions,” said New York Times assistant managing editor for international news Michael Slackman. “With the credibility of an upcoming national election at stake, we call on the leaders of Ethiopia to reverse its efforts to muzzle an independent press.”

It’s not only international journalists who are suffering. Many Ethiopian journalists, some of whom are employed by foreign outlets like bbc and Reuters, have been detained since last year.

Many both in and out of Ethiopia thought Abiy’s election in 2018 was a harbinger for change. After Ethiopia’s liberation from a Communist regime in the 1990s, Meles Zenawi ruled the country with an iron fist until 2012. He repressed political and media freedom and engaged in conflict with Eritrea. Abiy appeared to reverse this course, releasing imprisoned journalists and political opponents and reconciling with Eritrea, for which he won the Nobel Peace Prize. It looked like Ethiopia would finally embrace democratic values.

But lately, Ethiopia has been sliding back into old habits.

What does this mean for Ethiopia’s relationship with America?

We at the Trumpet have expected Ethiopia to take an anti-American turn. We base our analysis on a biblical prophecy in the book of Daniel: “And at the time of the end shall the king of the south push at him: and the king of the north shall come against him like a whirlwind, with chariots, and with horsemen, and with many ships; and he shall enter into the countries, and shall overflow and pass over. … He shall stretch forth his hand also upon the countries: and the land of Egypt shall not escape. But he shall have power over the treasures of gold and of silver, and over all the precious things of Egypt: and the Libyans and the Ethiopians shall be at his steps” (Daniel 11:40, 42-43).

This is a prophecy for “the time of the end,” a time far in the future from when this prophecy was given. The context of the rest of the prophecy, combined with secular history, shows that the king of the north is a revived Roman Empire in Europe (please request our free booklet The Proof of the Bible for more information). But who is the “king of the south”?

“All indications point to Iran as the nation that produces the king of the south,” writes Trumpet editor in chief Gerald Flurry in his free booklet The King of the South. “Since the early 1990s, we have believed and taught that Iran would lead the radical Islamist world and be the king of the south. Today Iran is ‘king’ in the Middle East.”

America has many enemies, but Iran is a good contender for its most hostile foe. Iran sponsors anti-American Islamic terrorist groups all over the Middle East. These include Hezbollah in Lebanon, Hamas in Gaza, al-Shabaab in Somalia, the Houthis in Yemen, the “Shiite militias” in Iraq, and others. Iran and America almost went to war last year with the assassination of Iranian “super general” Qassem Suleimani.

If relations between America and Ethiopia were to sour, who would Ethiopia turn to? Its human rights record doesn’t impress Europe either. Aligning with Russia may bring too many memories of Ethiopia’s Communist regime.

Keep watching Ethiopia. The Horn of Africa may seem far away for many, but what’s happening there will trigger events that will change the world. To learn more, please request your free copies of The King of the South and Libya and Ethiopia in Prophecy.