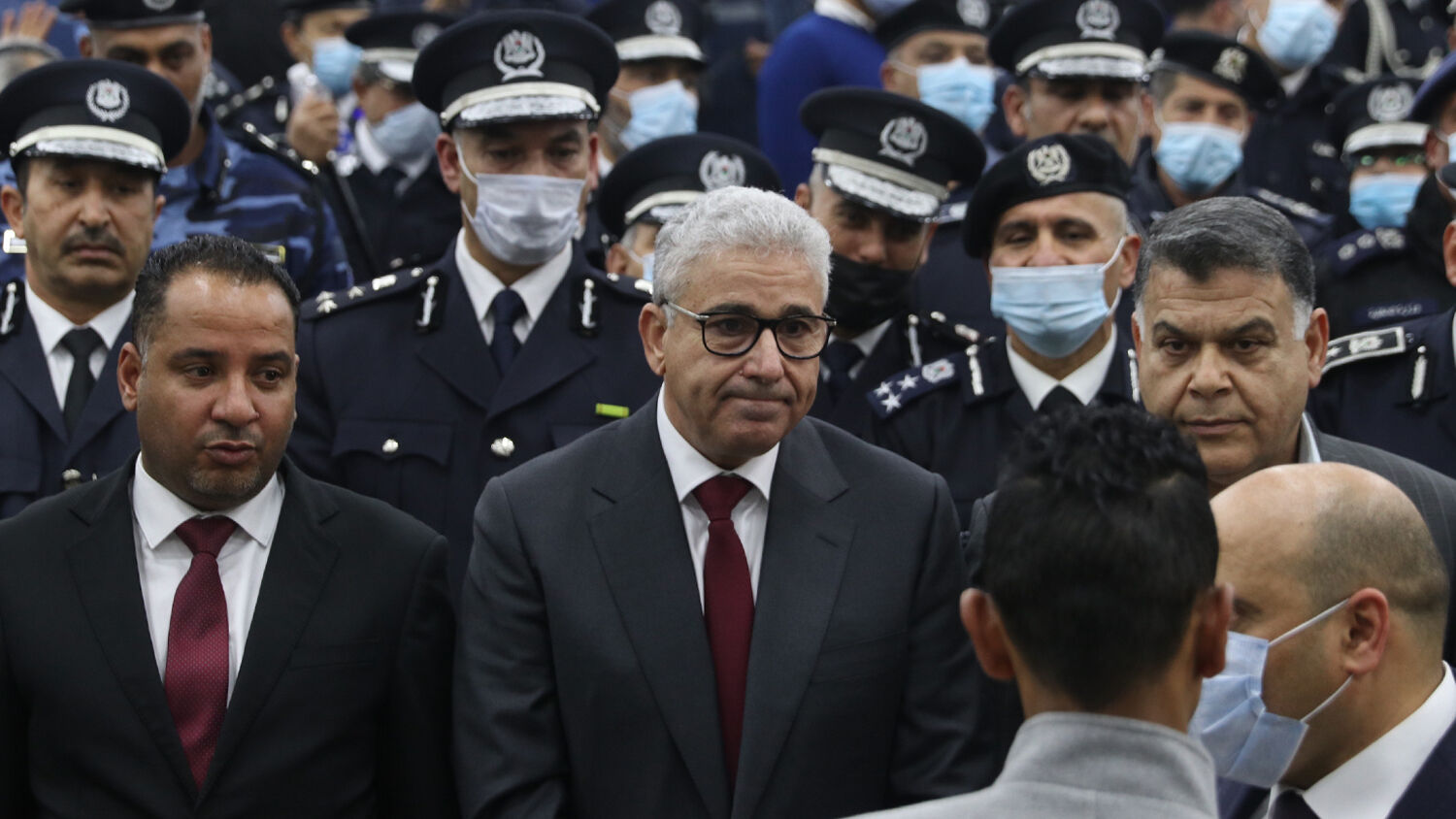 The Libyan civil war’s two main factions agreed on February 5 in Geneva to form a unity government. Brokered by the United Nations, the deal was between the internationally recognized Government of National Accord, based in Tripoli, and the Libyan National Army, based in the eastern city of Tobruk and controlling the majority of Libya’s territory. The two sides mended their differences and agreed to an interim government. This interim government is to rule Libya until elections scheduled for December.

The talks in Geneva produced this caretaker administration for Libya. The powers of head-of-state will be controlled by a three-member Presidency Council. Mohammed Younes Menfi was elected the president of the council. The other two members of the council are Mossa al-Koni and Abdullah Hussein al-Lafi.

Abdul Hamid Mohammed Dbeibah was voted in as prime minister. He will have most of the political power in the new arrangement.

Acting SRSG announces the winning candidates for the Presidency Council and Prime Minister positions for the temporary period. #LPDF https://t.co/AqBs22NnnW

Ever since the United States ousted Libyan dictator Muammar Qadhafi in 2011, Libya has been embroiled in a civil war. The nation became a hotbed for Islamic extremism. If this deal holds, Libyans may get a break from nearly a decade of warfare.

“Today we have very good news in our search for peace,” said UN Secretary General António Guterres. “I welcome the selection by members of the Libyan Political Dialogue Forum (lpdf) of a unified temporary executive authority. … The United Nations commitment to support the Libyan people in their efforts to build a peaceful and prosperous country will continue. After the ceasefire that was agreed, the elections that now took place shows that Libya is moving in the right direction.”

Post-Qadhafi Libya has been a failed state. The Libyans have endured a bloody civil war since 2011. Trumpet editor in chief writes in Libya and Ethiopia in Prophecy (last updated in 2016):

Since Qadhafi’s death in 2011, Libya has had eight different prime ministers. Today, there’s practically no functioning government running the nation. On paper, there are two governments: … one in Tobruk and … one in the capital Tripoli. That state of affairs is in many ways much worse than Syria, where President Bashar Assad still receives international recognition and support from nations like Russia and Iran.

The latest agreement may finally—even if only temporarily—provide the Libyan people with a long-awaited rest. But the situation in Libya, as with all regime change in the Middle East, demands closer scrutiny.

Could the celebration over Libya’s new government be premature?

Time will tell. But the new prime minister, Abdul Hamid Mohammed Dbeibah, has some interesting—and worrisome—associations.

Dbeibah was born in 1959. He moved to Canada as a young man and obtained a master’s degree in engineering at the University of Toronto. He moved back to Libya during a construction boom in the country and became a construction magnate in his hometown of Misrata. Qadhafi noticed his talents and appointed him head of the Libyan Investment and Development Company (lidco), a state-owned enterprise responsible for Libyan megaprojects. This included building over a thousand homes in Qadhafi’s hometown of Sirte. The corporation has recently been involved with large-scale projects in Benghazi, like the construction of the Al-Fatah Tower.

The links with Qadhafi aren’t what is concerning here. Rather, it is Dbeibah’s connections with the Muslim Brotherhood.

The Muslim Brotherhood is the Islamist movement that controlled Egypt after the Arab Spring. Its political ambitions made Qadhafi edgy, so he banned the group from Libya. But since the 2011 revolution, the organization has been actively involved in Libyan politics.

Dbeibah’s cousin (and brother-in-law) is Ibrahim Ali Dbeibah. Like Abdul Hamid, Ibrahim Ali was a former Qadhafi insider. Formerly the mayor of Misrata, he also ran a state-owned construction company under Qadhafi: the Organization for the Development of Administrative Centers (odac). Ibrahim Ali is a member of the Justice and Construction Party (also known as the Justice and Development Party), which is the Muslim Brotherhood’s political wing. Ibrahim also funded Khalifa al-Ghawil, the former leader of the National Salvation Government. The National Salvation Government was sponsored by the Justice and Construction Party. odac was financially sponsored by lidco.

Abdul Hamid Mohammed Dbeibah is also close to Turkish President Recep Tayyip Erdoğan. Erdoğan, whose own political party is called Justice and Development, is an Islamist. He is a major sponsor of Islamist groups like the Muslim Brotherhood and Palestinian terrorist group Hamas. Dbeibah’s first interview with a major newspaper after being elected prime minister was with Turkey’s state-run Anadolu Agency.

“We maintain great solidarity with the Turkish state and people,” Dbeibah said in the interview. “Turkey is an ally, friend and a brotherly state, and it has huge capabilities to help the Libyans achieve their real goals. Turkey is considered a real partner to Libya.”

Dbeibah congratulated Turkey for being “the only country that the Libyans could free travel to during the [civil] war.” He said he hoped to “bolster [economic] cooperation and enhance [Libyan-Turkish] trade exchange to the highest level.”

Dbeibah also supports the Turkish mercenaries currently in Libya. According to an adviser to Erdoğan, “the new Libyan government supports Ankara’s role in Libya and does not oppose the Turkish military presence in the country.” Turkey previously sent Arab mercenaries to support Libya’s Government of National Accord during the civil war.

This suggests the new government has more Islamist leanings than meets the eye.

“The results of the illusionary and illegitimate elections to choose the chairman and members of the presidential council in Libya, the least that can be said about them is that this is a conspiracy against the Libyan people,” prominent Egyptian journalist Mostafa Bakry tweeted. “They have restored the Muslim Brotherhood to the fore.”

The Trumpet has been watching for an Islamist takeover in Libya for years now. But in the end, while the Turkish government has Islamist leanings, it won’t be Turkey but Iran that adds Libya to its empire.

Regarding the 2011 nato invasion of Libya, Mr. Flurry writes in Libya and Ethiopia in Prophecy:

America and the West have paved the way for another Iranian victory in Libya. We are rejoicing about the overthrow of Libya’s Muammar Qadhafi, while we should be mourning. Libyan chaos is now the ideal for Iran to bring that nation into its deadly terrorist web. The government that replaces Qadhafi will be a thousand times worse

Why Iran? Under Supreme Leader Ayatollah Ali Khamenei, Iran is truly radical and revolutionary—and increasingly seen as the “top dog” of radical Islam worldwide. It is the number one state-sponsor of terrorism around the world. Tehran actively builds its proxy empires by supporting and installing radical jihadist regimes throughout the Middle East. It sponsors Hezbollah in Lebanon and the Houthis in Yemen. It sponsors Hamas in Gaza and the increasingly autonomous Shiite militias in Iraq. Egypt under former President Morsi, who was associated with the Muslim Brotherhood, restored relations with Iran that had been cut since 1978.

But there is another, more important reason why we expect Libya to join the Iranian camp. Bible prophecy states that Libya will be an Iranian ally. Notice Daniel 11:40-43:

And at the time of the end shall the king of the south push at him: and the king of the north shall come against him like a whirlwind, with chariots, and with horsemen, and with many ships; and he shall enter into the countries, and shall overflow and pass over. … He shall stretch forth his hand also upon the countries: and the land of Egypt shall not escape. But he shall have power over the treasures of gold and of silver, and over all the precious things of Egypt: and the Libyans and the Ethiopians shall be at his steps.

When The King of the South was first written, Libya was under the iron-fisted rule of Muammar Qadhafi. Although Qadhafi was a dictator, he was not an Iran-backed jihadist. Now that the dust is settling on the civil war, it looks like the new Libyan government is a group that Iran could work with. (And it is worth mentioning that, while a predominantly Christian country, Ethiopia is also in a domestic conflict that radical Islam could take advantage of.)

Time will tell how the situation in Libya will play out. The new Libyan government could side with Iran. Or it could collapse and be replaced by an even more pro-Iran regime. One way or another, Libya will ally itself with Iran. To learn more, request our free booklet Libya and Ethiopia in Prophecy.