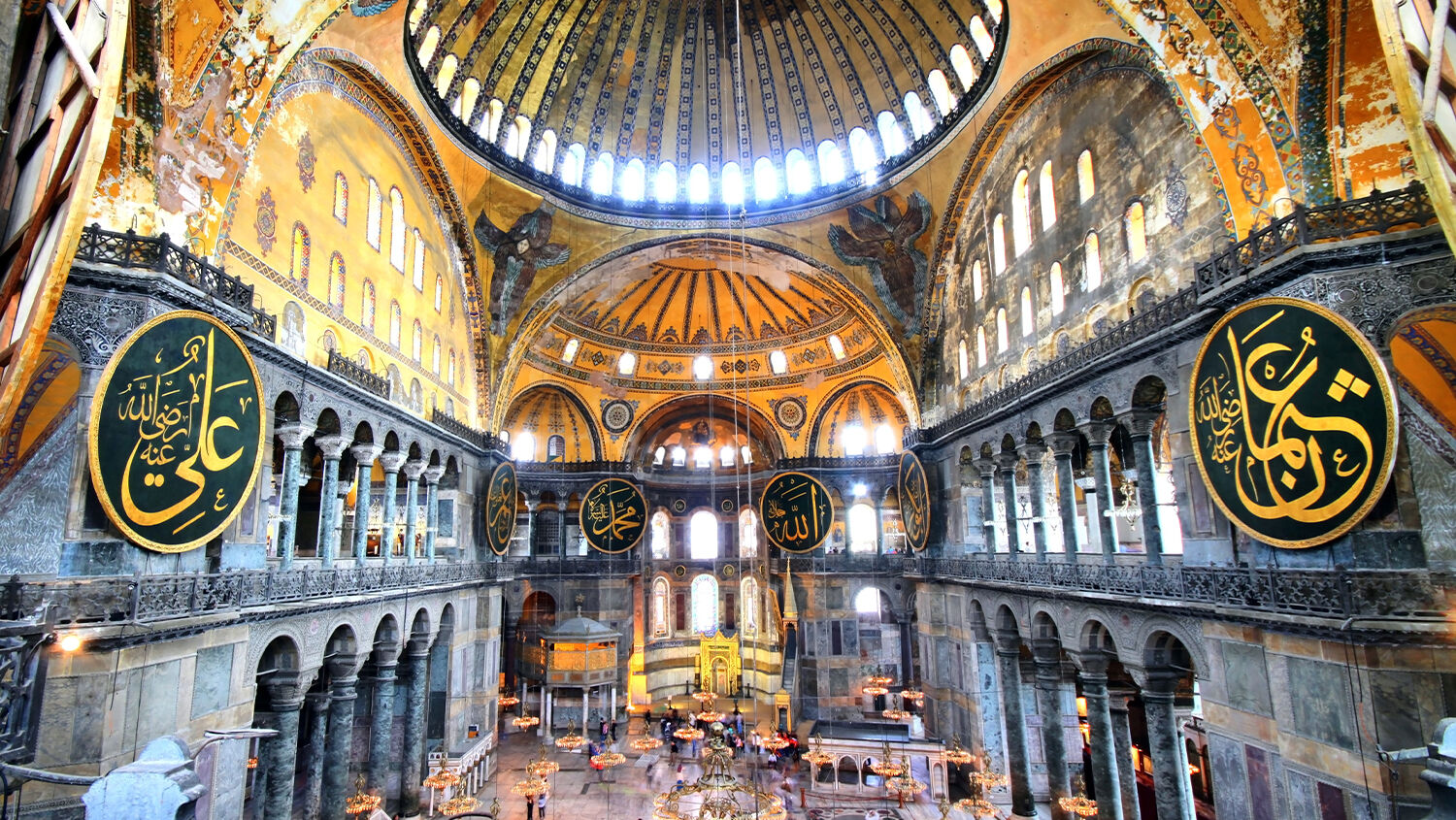 Turkey has just taken Orthodox Christianity’s greatest cathedral and turned it into a mosque.

There’s a lot of history here. When Hagia Sophia was opened by Emperor Justinian in a.d. 537, it was the largest, and possibly the most impressive, building in the world.

This one building may have impacted the lives of billions. Early Russian history records the story of Vladimir the Great, ruler of the Rus in the 10th century. Vladimir wanted to choose a religion for the Rus, and sent out envoys to neighboring civilizations. Once the envoys saw Hagia Sophia, their minds were made up. “We no longer knew whether we were in heaven or on Earth,” the envoys reported, “nor such beauty, and we know not how to tell of it.” Vladimir converted to Orthodox Christianity, and that religion has shaped Russian and Slavic history ever since.

In 1453, Constantinople and Hagia Sophia fell to the Ottoman Turks. And so they turned one of Christendom’s greatest churches into a mosque.

Hagia Sophia went through a third revolution in 1934. Mustafa Kemal Atatürk transformed Turkey from an Islamic empire into a secular state—as a powerful symbol of this, he transformed Hagia Sophia from a mosque to a museum. It is now Turkey’s top tourist destination, drawing 3.7 million visitors a year.

Which is why Turkish President Recep Tayyip Erdoğan’s decision on July 10 to turn it back into a mosque is so significant. His political allies have hailed it as a second conquest of Istanbul. It is a deliberate statement. Turkey is no longer the secular state of Atatürk. It is an Islamic nation, aiming to become an empire.

Turkish writer Orhan Pamuk said the conversion of Hagia Sophia back to a mosque “is to say to the rest of the world, ‘Unfortunately we are not secular any more.’ There are millions of secular Turks like me who are crying against this, but their voices are not heard.”

This reversal away from secularism runs against the grain of Western thought. To many, history runs in one direction: Europe used to be religious, but is becoming very secular; this is the march of progress that all nations will eventually follow.

Erdoğan’s reversal is the latest proof that the world is not on a one-way track to secularism.

Look around the world and you can see evidence of this. In 1989, Central Asia had only 160 active mosques. Four years later, there were 10,000. Moscow had 50 churches in 1988. Four years later, it had 250. Around the same time, nearly a third of Russians under age 25 said they had switched from being atheistic to believing in God.

In the still officially atheistic state of China, the World Religion Database shows the total number of followers of all religions jumping from around 300 million in 1970 to around 700 million today. Despite government attempts to stop it, religion has spread much faster than Chinese population growth.

“In the modern world, religion is a central, perhaps the central, force that motivates and mobilizes people,” wrote Samuel Huntington in his book Clash of Civilizations. “It is sheer hubris to think that because Soviet communism has collapsed, the West has won the world for all time and that Muslims, Chinese, Indians and others are going to rush to embrace Western liberalism as the only alternative.”

Time has proved Huntington dramatically correct. He wrote his book before 9/11, when radical Islam made itself a major concern to everyone in the world. He wrote it before head coverings became one of the major political issues in Europe, the bastion of liberal multiculturalism.

The big question is, could Europe be swept along by such a trend?

At the other end of Europe is what could be Hagia Sophe’s mirror image. The Grand Mosque of Córdoba in Spain was built in the eighth century a.d. To the locals at the time, “the beauty of the mosque was so dazzling that it defied any description.”

But the Grand Mosque is now the Cathedral of Our Lady of the Assumption, after the Spanish conquered it in 1236.

My point is not to set up some kind of moral equivalency between the two. Hagia Sophia is the fifth church of that name to be converted into a mosque in Turkey in recent years. I know of no Western country running the process in reverse.

Instead, my point is to show that Europe and the Middle East, Christianity and Islam, are closely connected. What happens in one affects the other—and has for centuries.

Religion is already rising in Europe in reaction to Islam. When Russia voted on its new constitution at the start of the month, most attention was focused on President Vladimir Putin’s attempt to extend his time in office. But the vote also added God into the constitution.

In Poland this month, incumbent President Andrzej Duda was reelected. Duda’s Law and Justice party has close links with the Catholic Church. “In hardly any other EU country are the state and church as closely connected as in Poland,” noted deutschlandfunk.de.

Across Europe, religion is making a comeback—not in terms of religious observance, but instead with symbols and rhetoric.

Across Eastern and Central Europe, leaders have made clear that they view their countries as Christian and that Muslims are not welcome. In May 2015, Hungarian Prime Minister Viktor Orbán said, “I think we have a right to decide that we do not want a large number of Muslim people in our country.”

“Let us not forget, however, that those arriving have been raised in another religion and represent a radically different culture,” he wrote in Frankfurter Allgemeine Zeitung. “Most of them are not Christians, but Muslims. This is an important question, because Europe and European identity is rooted in Christianity” (Sept. 3, 2015).

Slovakian Prime Minister Robert Fico said in May 2016, “I do not want to see a Muslim community in Slovakia. … We do not want to change the traditions of this country, which are built on the Christian tradition.” The president of the Czech Republic warned in January 2016 that integrating Muslims into Europe “is practically impossible.”

The same trends are arriving in Western Europe. Since 2018 all government buildings in the German state of Bavaria have been obliged to display a cross.

In the West, upstart political parties like the Alternative für Deutschland in Germany and the National Rally (formerly the National Front) in France have taken up the mantle of politicized religion. National Rally leader Marine Le Pen pushes “a secularized Christianity as culture,” Rogers Brubaker, a sociologist at the University of California–Los Angeles, told Atlantic magazine. “It’s a matter of belonging rather than believing.” Brubaker described it as a Christianity that says, “We are Christians, precisely because they are Muslims. Otherwise, we are not Christian in any substantive sense” (May 6, 2017).

The AfD is the same way. Its election slogans, such as “Burkas? We’re into bikinis,” are hardly paragons of chastity and virtue. In the culture wars, they are on the side of the Christian right, and the Christian right is happy to accept them.

The AfD’s stunning election success—coming from nowhere to become the third-largest party in Germany’s parliament—shows the appetite in Germany for this kind of religion in politics.

In Europe it tends to be Islamist terrorist attacks or migration from Islamic countries that triggers this kind of religious fervor. Absent of that, it dies down.

The Trumpet and, before us, the Plain Truth have been watching for this development since the 1930s. For decades Herbert W. Armstrong forecast that Europe would unite into a 10-nation superpower. But most of the Continent’s history is of one European nation fighting another. What force is strong enough to bind Europe together?

Attacks on Europe from outside are a powerful motivating force. Europeans certainly have a common enemy: radical, extremist Islam. But there is another important factor all European nations share: their Christian heritage.

In August 1978, Mr. Armstrong wrote in his Christian-living magazine Good News: “Europeans want their own united military power! … They have made a real effort toward union in the Common Market. … But they well know there is but one possibility of union in Europe—and that is through the Vatican.”

Europe will not be the one place in the world immune from this trend toward religion.

Mr. Armstrong successfully forecast the arrival of the single European currency, the euro. He forecast that the Iron Curtain would be broken up and that countries locked behind it would join a European union. He was proved correct. He made these accurate predictions because he relied on the Bible.

The Bible also forecasts that modern Europe will become more religious. Revelation 17 describes a “beast,” or empire in biblical symbolism. This empire “was and is not.” It appears on the world scene, is strong for a period of time, only to disappear into the “bottomless pit” before rising up again (verse 8). This power is led by a woman—symbolism for a church. Where has there been a power that rises and falls repeatedly, and is led by a church? This has to be describing the Holy Roman Empire in Europe.

But the Bible also tells us that this modern European power is shaped by its interactions with the Middle East. Daniel 11:40 is another prophecy for “the time of the end.” There, the Holy Roman Empire is described as “the king of the north”—the modern successor to the Roman Empire. It is facing off against a “king of the south”—radical Islam, led by Iran (for proof, read our free booklet The King of the South). This Islamic power pushes and provokes the king of the north.

Turkey is not the king of the south. But in the relationship between Islam and Christianity, you can see the same provocative dynamic. Islam is pushing at Christianity. As the Middle East becomes more Islamic, expect Europe to respond by becoming more Christian.

The defense of Constantinople and Hagia Sophia helped prompt the Catholic Church to launch the Crusades (though the crusaders also got sidetracked and sacked Constantinople themselves in 1204). Its fall in 1453 opened up much of Europe to Islamic conquest.

This city has often straddled the fault line between East and West. The Bible tells us a new crusade is coming. Watch for Europe to respond to the continuing Islamic push by becoming increasingly Catholic.

If you’d like to know more about the role of religion in Europe’s future, our free book The Holy Roman Empire in Prophecy is a great place to start. It shows that much of the Bible’s prophecies for Europe have already been fulfilled, proving what a sure foundation Bible prophecy is, and outlines what is to come in the near future.