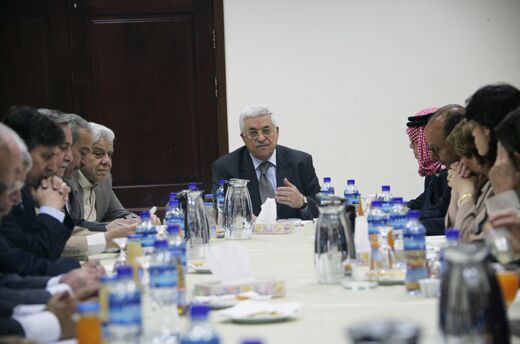 The Palestinian Authority government has been dissolved, and Hamas controls the Gaza Strip. This is a massive victory for Iran.

After days of brutal fighting between Hamas and Fatah, President Mahmoud Abbas announced Thursday that he would dissolve the Palestinian Authority government and declared a state of emergency.

This move, which comes two years after Israel ceded the Gaza Strip to the Palestinians, is certain to plunge this strategic territory into even greater chaos. For “moderate” Palestinians, Israel and the United States, it is a massive disaster. For Hamas, its fellow Palestinian terrorist groups—and, most of all, Iran—it is a significant victory.

For days, Hamas fighters have attacked Fatah forces in an effort to overtake strategic Fatah command centers throughout the Gaza Strip. Social disorder and destruction prevails; hospitals have no water or electricity; schools have been shut down; Palestinians, trapped by flying bullets, are holed up in apartment buldings; Fatah supporters are being lined up and executed in the streets, providing a horrifying sight for women and children onlookers. Hamas-imposed terror reigns in the Gaza Strip.

By Thursday, Hamas had taken control of three of Fatah’s most critical command centers, including its National Security headquarters in Gaza City. In addition to the government command centers, Fox News reported that Hamas has also seized Rafah, Gaza’s third-largest city. This was the second main Gaza city to fall under Hamas control; Wednesday the city of Khan Younis was captured by Hamas terrorists. Fox News reported June 14:

After the rout at the security headquarters, some of the Hamas fighters kneeled outside, touching their foreheads to the ground in prayer. Others led Fatah gunmen out of the building, some shirtless or in their underwear, holding their arms in the air. Several of the Fatah men flinched as the crack of gunfire split the air. A witness, who identified himself only as Amjad, said men were killed as their wives and children watched.

The chaos unfolding in the Gaza Strip has ramifications for the entire Middle East, and potentially the world. There are two trends we should watch in the time ahead.

First, will Hamas capitalize on the momentum it has gained in Gaza and make a move on Jerusalem? This is not unlikely. Not only has the terrorist group been talking for months about waging war on Israel this summer, so too have Syria and Iran, which provide aid to Hamas.

Thursday’s events were more than merely a victory for Hamas; they were a victory for Iran, the king of Islamic extremism. Tehran is thrilled that the majority of the Gaza Strip, a strategic piece of land just miles from Israel’s largest cities, is now controlled by Hamas. On Wednesday, as fighting persisted, Jerusalem Newswire reported that “[t]he Iranian regime of Mahmoud Ahmadinejad and his Syrian ally Bashar el-Assad [were] fueling the inter-’Palestinian’ violence in the Gaza Strip.” For months, both Iran and Syria have been funneling weapons into Gaza and training Hamas fighters.

As the Palestinian government continues to unravel, and as Hamas tightens its grip over the Gaza Strip, expect Hamas to counsel with Iran about its next moves. This is not some small terrorist group working an independent program; the leaders of Hamas are radical Islamists with strong ties to the spiritual leaders in Tehran. In a sense, Iran now owns and operates the Gaza Strip.

Second, how will the government of Israel respond to Hamas’s victory and the disintegration of the Palestinian government in Gaza? Until now, Israel has been hoping Fatah would be able to curb Hamas’s incursions into the Gaza Strip. Now that Fatah has been defeated and violence is exploding, Israel is forced to make a tough decision. It can either fight Hamas in an effort to stablize the Gaza Strip and stop the terrorist group from rolling into Israel, or it can do nothing.

If Israel allows Hamas to retain control, Hamas’s incompetence at governing will become even more evident. Absent international aid and intervention, over time Gaza will likely become an even worse economic basket case of unemployed, impoverished Palestinians. It is also likely that, if Israel doesn’t fight, Hamas will gather momentum and ramp up its war against Israel.

Israel has barely recovered from last summer’s war with Hezbollah, and now it is being pushed into another war. On top of that, the Israeli government itself is plagued with division and infighting.

Thursday’s events will test the character and strength of Israel.

There are multiple alarming angles to this week’s events in Gaza. For example, when Hamas defeated Fatah it gained control over thousands of high-powered weapons, originally supplied to Fatah by a U.S.-sponsored program to help boost Fatah forces. Will Hamas now use those weapons against Israel? There is also talk of an international force entering Gaza to curb Hamas and stabilize the area. It is likely that much of that force would be comprised of European soldiers. Biblical prophecy suggests that this too could have serious ramifications.

Thursday’s events in Gaza could mark a turning point in the history of Israel, the Middle East and the world. Time will tell.