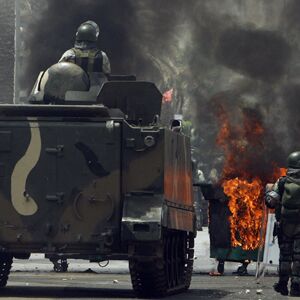 First, Iran conquered the Gaza Strip. Now, through Hezbollah, it controls Lebanon. What piece of territory will Iran conquer next?

Hezbollah terrorists recently overthrew the pro-democracy government of Lebanon. Sadly, the international community essentially stood back and let this happen. Everyone knows that Hezbollah operates as a proxy of Iran. A similar scenario occurred in the summer of 2007, when the mullahs in Tehran engineered the overthrow of the Gaza Strip through Hamas. The world was silent then too!

Yet if it were America or Israel taking over these nations, you can be sure there’d be a massive international outcry.

What does Lebanon’s takeover by Iranian-backed terrorists mean for America? It means the U.S. is losing its war against terrorism! It’s a calamity of the highest order! Most of the media and most of our politicians don’t view these events this way, but every terrorist victory is a warning sign to America, Britain and the Jews in the Middle East.

Iran is obviously the number-one terrorist-sponsoring nation in the Middle East, and it has been since the 1970s. Iran gained control of the Gaza Strip in 2006, when its proxy Hamas violently took over. After that victory, Tehran began to focus more diligently on gaining control of Lebanon. That goal was achieved recently when Hezbollah overthrew the Lebanese government. Iran now controls Gaza and Lebanon!

Now we must ask the question: What piece of territory will Iran conquer next?

Iran is undoubtedly going to go after the West Bank. The Arabs of the Fatah party currently control the West Bank. However, Hamas terrorists (and weapons) are present throughout the West Bank and there is little doubt that they are working toward getting control of this strategically located region of Israel. Iran’s ultimate goal is to overrun Jerusalem. The West Bank adjoins the city. The Iranians believe that if they can conquer Jerusalem, they can unite the Arab world under their control.

We face the same situation in the Middle East today. Iran has taken over Gaza and Lebanon, and soon it will get control of the West Bank. Then it will turn its attention toward its ultimate prize—the capture of Jerusalem!

Even after World War ii, President Franklin D. Roosevelt thought he could negotiate a peaceful handling of Eastern Europe with Russia’s Stalin. Yet Stalin, one of the worst dictators ever, ended up enslaving all of Eastern Europe. That’s what happens when you sit down and try to negotiate with these very ambitious and vile dictators. Sadly, too few people are paying attention to this alarming history today.

Last week the American president spoke at the Knesset to commemorate the 60th anniversary of Israel. Notice what he said:

Some seem to believe that we should negotiate with the terrorists and radicals, as if some ingenious argument will persuade them they have been wrong all along. We have heard this foolish delusion before. … We have an obligation to call this what it is—the false comfort of appeasement, which has been repeatedly discredited by history.

President George W. Bush is exactly right! It’s not a time to negotiate. It’s time to stop terrorist acts. But we just don’t have the will to do it. Last week columnist Ralph Peters also noted the reality of America’s broken will—which I have been talking about for years:

When will we face reality? Hezbollah can’t be appeased. Hezbollah can’t be integrated into a democratic government and domesticated. And Hezbollah, whose cadres believe that death is a promotion, can’t be deterred by wagging fingers and flyovers.Hezbollah, our mortal enemy, must be destroyed. But we—Israel, the United States, Europe—lack the will. And will is one thing Hezbollah and its backers in Iran and Syria don’t lack: They’ll kill anyone and destroy anything to win.

Clearly, there is a failure of will on the part of America and the Western world as Iran keeps marching forward and winning systematic terrorist acts of war. Did you know that God prophesied (Leviticus 26 and Deuteronomy 28) that this would happen to the nations of end-time Israel because they would turn from God’s law and protection—the result being a series of defeating curses?

Both U.S. Democratic presidential nominees strongly disagreed with President Bush’s remarks. Barack Obama said that America needs to “use all elements of American power—including tough, principled and direct diplomacy—to pressure countries like Iran and Syria.” Hillary Clinton called Bush’s comments “offensive and outrageous.” Of course, Winston Churchill was also vilified for warning against Hitler and Nazi Germany before World War ii. But we fail to learn from our own history.

Bible prophecy says that Iran will push at a European power (Daniel 11:40). That push will undoubtedly revolve around Jerusalem, which remains a focal point of Catholicism, and is rapidly being besieged by radical Islamic forces led by Iran. Conquering Jerusalem has been Iran’s openly stated goal for some time. But can you imagine what will happen to the Arab world when it takes control of East Jerusalem—including its third-most holy site? (You can learn more about this event by reading “Jerusalem Is About to be Cut in Half”).

Strong’s Bible Concordance states that this European whirlwind will leave people terror-stricken! It’s probably going to be a nuclear whirlwind, and it’s going to do a lot of damage very quickly. Remember, Iran started this state-sponsored terrorism, and it’s been the sole power behind it for the most part, although occasionally helped by Syria. But it’s mainly Iran—the king of the south! And gaining control of Jerusalem is its number-one ambition. America and other Western nations can negotiate with it, and turn a blind eye when it overthrows governments, but nobody’s going to talk it out of that goal. Those are its avowed goals and it has said so for years and years, just like Hitler did before he started World War ii. It’s like Churchill said, we just never seem to learn from history!

God wants us to know that just before Christ’s return will be a time when prophecy will be very specific and detailed. He said we would even be counting the days. That’s very exciting! I don’t know how it could be more inspiring and stirring and uplifting than that. And when we see Iran’s continual pushing, though it is bad news, it’s going to lead to this greatest event ever to occur in the universe—the return of Jesus Christ!

It’s going to happen, and you can prove it from your Bible. You have to prove this to yourself. You don’t want to take my word for it or any man’s word for it—but you can take God’s word for it! When He says it, it will come to pass every time. These are the most exciting times in the history of man. The Messiah is about to come!