By Anthony Chibarirwe and Callum Wood 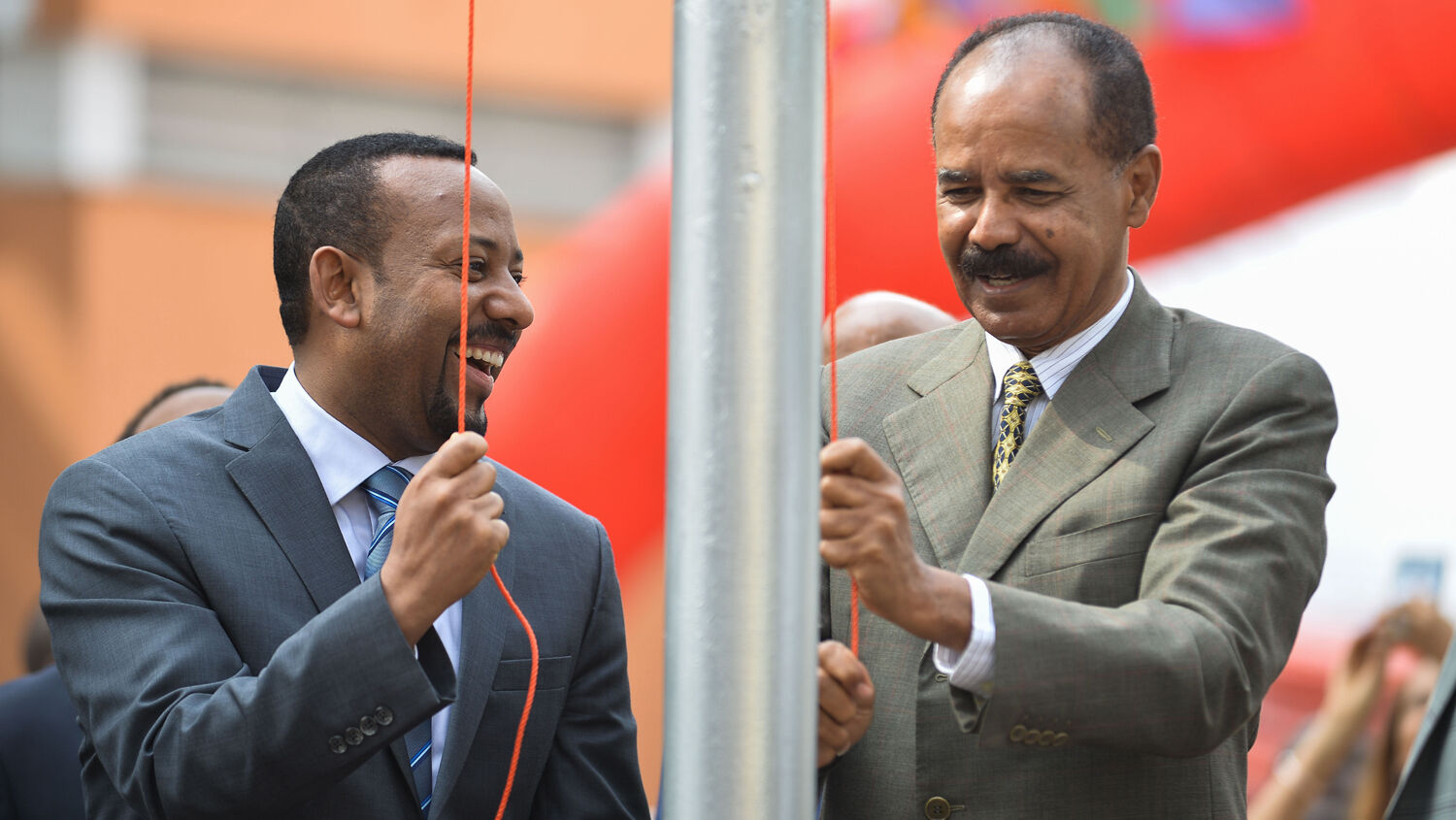 By Anthony Chibarirwe and Callum Wood

These two African nations have split, unified and split again since Eritrea’s declaration of independence in 1993. Their enmity intensified between May 1998 and June 2000 in a bloody conflict that killed about 100,000 people. The war technically ended with the Algiers Agreement, which established the Eritrea-Ethiopia Boundary Commission to settle the dispute. The two prime ministers at the time had promised to implement the Algiers Agreement, but never did because they disagreed with the commission’s recommendations. Border skirmishes continued. But on June 5, Prime Minister Abiy announced Ethiopia’s plans to implement those recommendations, which include ceding the border town of Badme to Eritrea.

Prime Minister Abiy visited Eritrea and confirmed the agreement by signing the Joint Declaration of Peace and Friendship with Eritrean President Isaias Afwerki on July 9. Abiy vowed to “demolish the wall and, with love, build a bridge between the two countries.” He said the two nations were “not only intertwined in interests but also in blood.”

For the first time in 20 years, Ethiopia traded with Eritrea. Direct commercial flights and road travel between the two nations resumed. Telephone lines opened, and family members cut off for decades have been calling one another. Ethiopia and Eritrea reopened their embassies in each other’s countries.

Most importantly, Ethiopia gained access to the strategic Red Sea—access it lost when Eritrea declared independence and took the entire Ethiopian coastline with it.

Amid the smiles of reconciliation lies an important story that must be told. It points to a little-noticed Bible prophecy that may well have just taken a major step forward in fulfillment.

Battle for the Red Sea

Change is in the air—or rather, on the sea. The Ethiopian Navy, which disbanded in 1993, is being revived.

In March, Ethiopia—Africa’s fastest-growing economy—acquired a 19 percent stake in the Port of Berbera, located in the breakaway Somali state of Somaliland. In May, it signed an agreement for a stake in Djibouti’s main port. Two days later, it signed a similar agreement for Sudan’s largest Red Sea port. In July, Ethiopia and Eritrea agreed on joint development of ports on Eritrea’s Red Sea coast.

On June 1, the Fana Broadcasting Corporation quoted Prime Minister Abiy saying, “Following the efforts made to build [the] capacity of our national defense, we built one of the strongest ground and air forces in Africa. We should build our naval force capacity in the future.”

The more Ethiopia invests in the Red Sea region, the more effort it will make to rebuild its naval capacity.

The prime real estate in the region, however, is the Bab el-Mandeb, the southern gateway to the Red Sea which squeezes past Eritrea, Yemen and Djibouti. It carries immense geopolitical significance. Some 19,000 vessels each carrying 1.5 billion barrels of Middle Eastern oil pass through the strait each year, making it the fourth-busiest passage in the world, according to the Center for International Maritime Security.

Europe needs this passage to remain secure for the sake of its oil imports. Its next best alternative is the Cape of Good Hope, but because of the extra 10 days of transit time, threat of piracy and resulting higher risk premiums, using it would heavily damage the economy of Europe and of the whole world.

Controlling the Bab el-Mandeb means wielding a lot of power.

That is power the Ethiopian Empire once wielded, and Prime Minister Abiy clearly wants to reclaim some of it. During a political rally in June, he said, “Ethiopia will get back its lost glory.” Achieving this goal requires, among other things, greater sea access via closer ties with its neighbors, especially Eritrea.

This makes the interests of another power in the region leap into perspective: Iran.

Unlike his two immediate predecessors, who were Christians ruling a predominantly Christian country, Abiy has a Muslim background: His father is a Muslim and his deceased mother was a Christian. He is from the Muslim Oromo tribe, which, at 36.6 percent of the population, is Ethiopia’s largest ethnic group.

Abiy’s Muslim background might play a significant role in end-time events prophesied about Ethiopia. Based on a passage about the “king of the south” (radical Islam, led by Iran) and Ethiopia in Daniel 11:40-43, Trumpet editor in chief Gerald Flurry warned in April 2011 that Ethiopia will fall under the control of radical Islam.

That forecast seemed unlikely at the time. It came well before Prime Minister Abiy and well before the protests of the past three years that further highlighted Ethiopia’s instability and vulnerability to foreign influence. But the situation is much different now.

Iran, the world’s top state-sponsor of terror, already has strong influence in Eritrea. Reconciliation between Ethiopia and Eritrea could expand its influence further.

For years, Iran has worked with Eritrea to smuggle weapons to Somalia. According to an Eritrean opposition group, Iran supplied weapons and troops via Eritrea’s Port of Assab in 2008 to train Somalian militants. Soon after, the United Nations Security Council imposed sanctions against Eritrea. When Eritrea supported Iran’s nuclear program in 2009, Tehran wired $35 million to the nation.

What does Iran want? And what does it stand to gain if Ethiopia and Eritrea further unite?

“Iran … strives to have a strong presence in the region,” Geopolitical Futures wrote February 21. “Until recently, Iran was a patron of both Sudan and Somalia [Ethiopia’s neighbors], but then Saudi Arabia paid each to switch sides, and Iran lost its place. Ethiopia could be a replacement …. Iran is already close to having strategic control of the Bab el-Mandeb strait—the narrow waterway north of the Horn of Africa—through its influence over militant groups in Yemen. That control is what Iran cares most about in the region.”

This is precisely the same analysis Mr. Flurry has made over the years.

In an August 2012 Key of David television program, “Ethiopia in Prophecy,” Mr. Flurry said, “What Iran really wants is control over the Red Sea and the Mediterranean Sea, and [it has] a strategy …. [I]f a nation gets control of that sea lane through there—the Red Sea and the Mediterranean Sea—can you imagine what that is going to add to their military might?”

Consider the Strait of Hormuz in the Persian Gulf, the world’s busiest sea passage. Iran’s control over this strait has enabled its leaders to threaten to close it. The threat is so powerful, experts call it Iran’s “nuclear option.” As recently as July 2, Iran’s president threatened the Hormuz “nuclear option” in response to U.S. President Donald Trump’s attempt to block Iran’s oil exports. That threat was echoed by Islamic Revolutionary Guard Corps Maj. Gen. Mohammed Ali Jafari, who said, “We will make the enemy understand that either all can use the Strait of Hormuz or no one.”

On Oct. 25, 2016, Foreign Policy wrote, “If a coastal foe can menace shipping transiting [the Bab el-Mandeb] seaway, it would disrupt the shortest, most convenient sea route connecting Europe with South and East Asia. Doing so would carry significant economic and military repercussions.”

How much more power would Iran have if it used Sudan, Yemen, Eritrea and Ethiopia to gain a second “nuclear option”: full control of the Bab el-Mandeb?

This is precisely the outcome Bible prophecy suggests.

What Iran Will Get

“And at the time of the end shall the king of the south push at him: and the king of the north shall come against him like a whirlwind, with chariots, and with horsemen, and with many ships; and he shall enter into the countries, and shall overflow and pass over” (Daniel 11:40). Radical Islam, led by Iran, is this “king of the south.” A rising European power will be the “king of the north.” The prophecy adds in verse 43: “[T]he Libyans and the Ethiopians shall be at his steps,” indicating an Iranian alliance of sorts with Libya and Ethiopia.

“Whoever heavily influences or controls Ethiopia will undoubtedly also control the small areas of Eritrea and Djibouti on the Red Sea coastline,” Mr. Flurry writes in his booklet The King of the South. “These areas only recently became independent of Ethiopia. Also, I believe the Bible view is that these small areas are included as a part of Ethiopia.”

“The king of the south is going to push at the king of the north, probably from its trade route power,” Mr. Flurry continues. “That push will be a dramatic act of war!” And Daniel 11:40 forecasts the outcome. Europe “will respond with an all-out whirlwind attack—and Iran and radical Islam will fall immediately” (ibid).

Many might celebrate the end of radical Islam, but Bible prophecy does not end there. The clash between the king of the south and the king of the north will trigger global conflict. Jesus Christ calls this “great tribulation”—a time of unparalleled suffering (Matthew 24:21).

God warns us to watch and pray that we might be found worthy to escape (Luke 21:36). We must keep our eyes on Ethiopia. God says it will soon shift toward radicalism. Keep this in mind: Any increase in Ethiopian influence over the Red Sea and Bab el-Mandeb, via its growing ties with Eritrea, will soon be Iran’s influence.