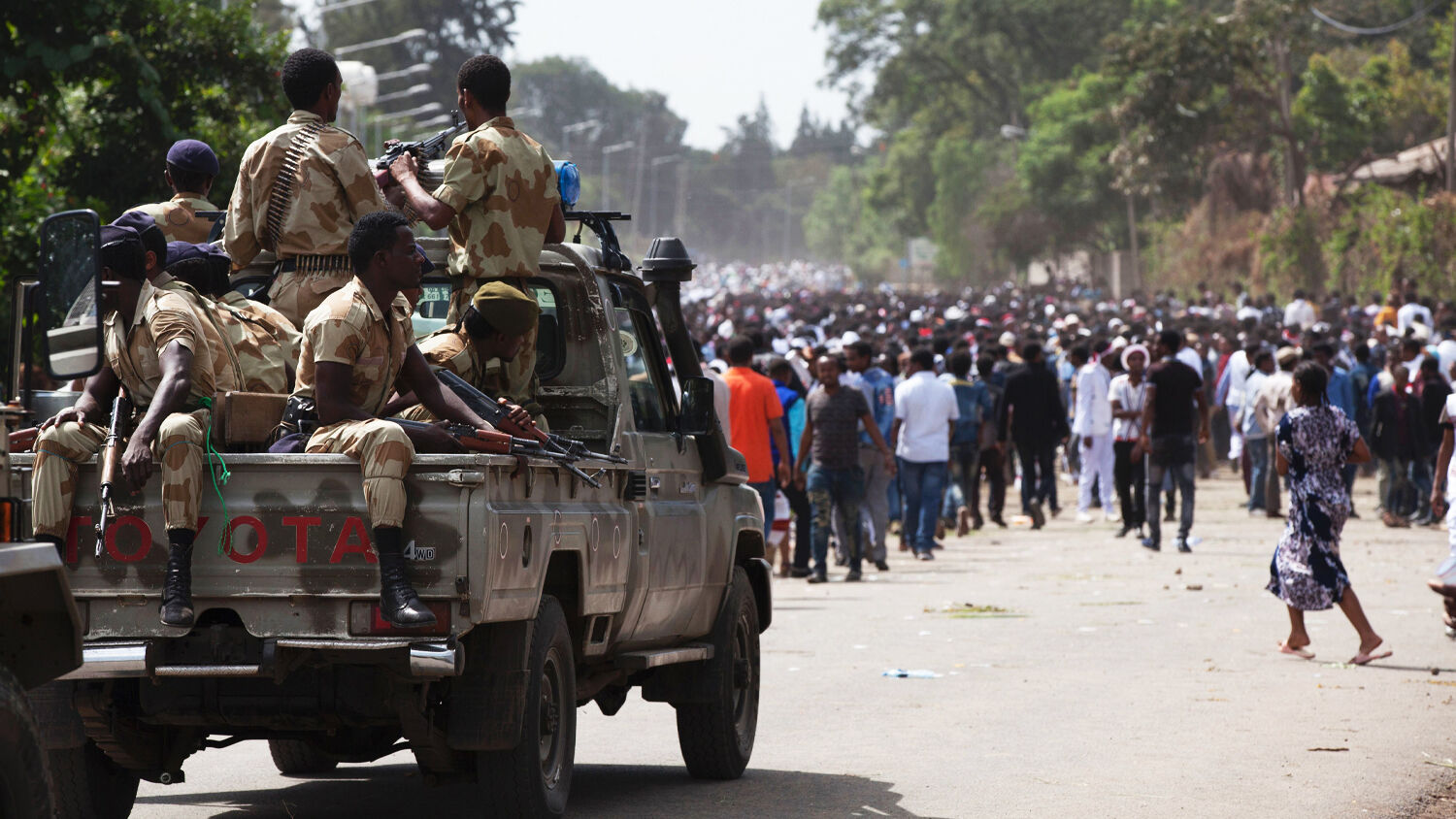 Military intervention in a rebel region might bring Ethiopia to ‘state collapse.’

Fears of a civil war continue to grow as the political tension in Ethiopia’s north spills into open conflict. Ethiopian Prime Minister Abiy Ahmed deployed troops in a military operation in the Tigray region on November 4. He said the deployment was in response to “months of continued provocation and incitement” against the federal government by the Tigray regional government.

The main “provocation” leading to Mr. Abiy’s decision was an apparent attack on an army base located in Tigray, allegedly to steal military supplies, by the Tigray People’s Liberation Front (tplf). Regional broadcaster Tigray tv reported that the army’s northern command—stationed at the attacked base—had defected to the tplf. The prime minister denied the allegations.

“Our defense forces … have been ordered to carry out their mission to save the country,” said Mr. Abiy. “The final point of the red line has been crossed. Force is being used as the last measure to save the people and the country.”

The tplf is a political organization that helped overthrow Ethiopia’s Communist government in 1991. It had ruled Ethiopia for decades under a basically one-party dictatorship, despite the Tigray ethnic group representing only about 7 percent of the country’s population of over 100 million. The tplf lost power in 2018 and Ethiopia has since been ruled by Abiy, who is of the Oromo ethnic group, which represents roughly 35 percent of Ethiopia’s population.

The Tigray region, which has a higher standard of infrastructure than the rest of the country as well as well-organized security forces independent of the national army, is controlled by the tplf politically.

Internal conflict is nothing new to Abiy’s administration. The splintered factions and tribes that make up the national mosaic are constantly at odds. More often than not, these disagreements end in bloodshed and violence. But a war with the Tigray region presents new and potentially nation-shaking consequences.

Losing its disproportionate amount of power and influence has not made the Tigray elite happy. Ethiopia was supposed to have parliamentary elections earlier this year, but Abiy postponed the elections for another year due to covid-19. The order was supposed to postpone all elections in the country, but the Tigray region held its own parliamentary elections against the federal government’s wishes while calling Abiy’s actions dictatorial. In retaliation, the Ethiopian parliament cut off all federal funding for Tigray.

Meanwhile, on October 30, a general appointed by Abiy to be stationed in Tigray couldn’t get to his post; the Tigray regional government notified him that it wouldn’t recognize his appointment as it viewed Abiy’s mandate to rule as illegitimate following the suspension of elections. The government couldn’t do much about it at the time

These incidents of open defiance have now escalated into a military conflict. Abiy blames the tplf for attacking the army base, and skirmishes have erupted between troops loyal to the federal government and those loyal to the tplf have happened. The tplf claims several federal troops have defected to Tigray’s cause, but this is disputed by Abiy.

Foreign-policy analysts are predicting the worst. Dr. Yohannes Woldemariam told the Telegraph that this “is an existential crisis for Ethiopia. It could mean state collapse. The whole region will be affected, from refugees to destabilization.” Tsedale Lemma tweeted that Abiy’s military venture “isn’t ‘a surgical operation’ which will quickly end tplf, but an epistemic rupture of the [Ethiopian] Federation as we know it.”

But make no mistake, this isn’t “a surgical operation” which will quickly end TPLF, but an epistemic rupture of the Federation as we know it. When it’s over, & regardless of its outcome, Abiy’s failed ambition of a nation building project will be irreparably dented! 4/4

A six-month state of emergency has now been declared. Internet access is down and telecommunication lines have been cut—leading to fears of an all-out war. As one senior Tigrayan official told the Agence France Presse, “I think when it comes to military mobilization, it’s not child’s play. It can trigger all-out war. … What they are doing is playing with fire. … A small spark can ignite the whole region. [A]nd I can assure you we are capable of defending ourselves.”

Ethiopia’s population of 108 million people is extremely diverse ethnically. The Oromo, the largest ethnic group, barely tops a third of Ethiopia’s population at 35 percent. The next largest ethnic group, the Amhara, makes up 28 percent of the population. The Tigray come in at number three with 7 percent of the population. Ethiopia is also extremely diverse religiously: Roughly 44 percent of Ethiopians follow the Ethiopian Orthodox Church, 31 percent are Muslim, and 23 percent belong to Protestant groups.

As small as the Tigray population is when compared with the rest of the nation, the territory is stacked with a large portion of the nation’s military. The Tigray region shares a border with Eritrea, a flashpoint for conflict in recent years. According to the Guardian, “Some analysts estimate that Tigray could muster more than half of the armed forces’ total personnel and mechanized divisions.”

Ethiopia has had a troubling recent history. After living under a Communist dictatorship for years, Ethiopia went to war in the 1990s with the breakaway region of Eritrea (now an independent country) that was taking with it all of Ethiopia’s coastline. Ethiopia found itself landlocked at the conclusion of a war that killed roughly 100,000 people on both sides. While Ethiopia has had robust economic growth in recent years, the poverty rate was still at 23 percent, almost a quarter of the population, as of 2016. Ethiopian troops are currently involved in the civil war in Somalia. The country frequently experiences drought and in 2019 had the worst locust infestation in 25 years. Ethiopia also harbors about 800,000 refugees from other African countries.

Analysts worry that all of this is creating the perfect storm for Ethiopia to dissolve and collapse into different warring factions based on ethnicity, similar to what the former Yugoslavia went through in the 1990s. They fear the recent military incursion into Tigray could be the catalyst for this.

But there have been other tremors recently hinting of a bigger earthquake of violence to hit Ethiopia. Last year, Gen. Asaminew Tsige of the Amhara ethnic group staged a coup against the Amhara regional government, murdering the state president and calling on his fellow Amhara to mobilize militarily. The coup ultimately failed.

Ethiopia is also in a squabble with Egypt over the construction of the Grand Ethiopian Renaissance Dam, which promises to bring a gigantic source of power to Ethiopia but threatens to stop the Nile from flowing into Egypt. U.S. President Donald Trump recently made a casual comment that he would support Egypt if Egypt and Ethiopia went to war—even though America and Ethiopia are military partners.

One has to ask then, if Ethiopia falls into a bloody crisis, who will come in to fill the power vacuum?

A potential answer is to look across the border to another country in the Horn of Africa embroiled in a civil war: Somalia.

The Somali government has been fighting a three-way civil war since 2009 between it, the breakaway region of Somaliland, and the Islamist terror group al-Shabaab. The faction to watch is al-Shabaab, which controls a sizable amount of Somali territory. While it is primarily based in Somalia, it operates around the world. Ethiopia has peacekeepers in Somalia fighting against al-Shabaab currently.

If Ethiopia were to fall into chaos, it might be the al Shabaab’s opportunity to start extending its tentacles across the border, into a country that is just under a third Muslim. Abiy Ahmed has publicly voiced his concern about al-Shabaab gaining influence inside Ethiopia.

But al-Shabaab isn’t the big fish here. While the terrorist group has historically been associated with al Qaeda, relations between it and Iran have recently been warming. Iran has sponsored al-Shabaab attacks on U.S. targets in Somalia and has used Somalia to send weapons to its proxy, the Houthis, in Yemen, as well as to other vulnerable countries, such as South Sudan and the Central African Republic.

Iran has also been using Somalia as an entry point to smuggle oil into Africa and from there sell it to other African countries under the radar of American sanctions.

Most significantly, al-Shabaab has been mining uranium from the territories it controls and sending it to Iran, almost certainly to be used in its nuclear program, “officially” to be used for peaceful purposes even as it publicly calls for wiping Israel off of the map.

The Quds Force, Iran’s elite foreign military unit, has been actively sponsoring al-Shabaab and maintains cells throughout Africa. The current leader of the Quds Force, Ismail Qaani, has a history of work in Africa.

And everywhere from Iraq to Lebanon to the Palestinian Territories, Iran has taken advantage of political instability to sponsor armed groups that eventually take over the government.

Ethiopia also has a religious component to its struggles. Today, Islam is the second-largest religion in the nation, behind Ethiopian Orthodoxy.

One source we at the Trumpet rely on regularly shows that Iran will add Ethiopia to its proxy empire.

That source is the Holy Bible.

Notice this prophecy in Daniel 11: “And at the time of the end shall the king of the south push at [the king of the north]: and the king of the north shall come against him like a whirlwind, with chariots, and with horsemen, and with many ships; and he shall enter into the countries, and shall overflow and pass over. … But he shall have power over the treasures of gold and of silver, and over all the precious things of Egypt: and the Libyans and the Ethiopians shall be at his steps” (verses 40 and 43)

Trumpet editor in chief Gerald Flurry has written about this passage for almost three decades. In his booklet The King of the South (request your free copy), he proves that this prophecy is relevant for our day today (the “time of the end”). He also proves the identity of the king of the south—a king with a “pushy” foreign policy that controls vast areas of the Middle East and North Africa—to be Iran.

This prophecy also lists some of the countries that will be allied with the king of the south. Included among these is Ethiopia.

Mr. Flurry writes in his free booklet Libya and Ethiopia in Prophecy:

Why did God inspire the mentioning of Libya and Ethiopia? Every word in God’s inspired Bible has significance. God placed two nations in the same verse as Egypt for a definite reason. This verse states that Libya and Ethiopia are also going to be closely allied with Iran!

Here is how the Soncino commentary defines at his steps: “Either joining his army, or placing themselves at his beck and call.”

Gesenius’ Hebrew-Chaldee Lexicon defines that expression as “in his company.”

The Moffatt translation reads this way: “following in his train.”

While time will tell whether al-Shabaab will gain a foothold in Ethiopia or whether the conflict in Tigray will lead to regime change, you need to watch Ethiopia closely. While the nation is predominantly Christian, Bible prophecy foretells of an Islamic takeover in the near future. And once that happens, the stage will be set for a clash of civilizations the likes of which the world has never seen before. This clash is a major part of the Bible’s forecasts of future events. To learn more, please request our free booklet Libya and Ethiopia in Prophecy.