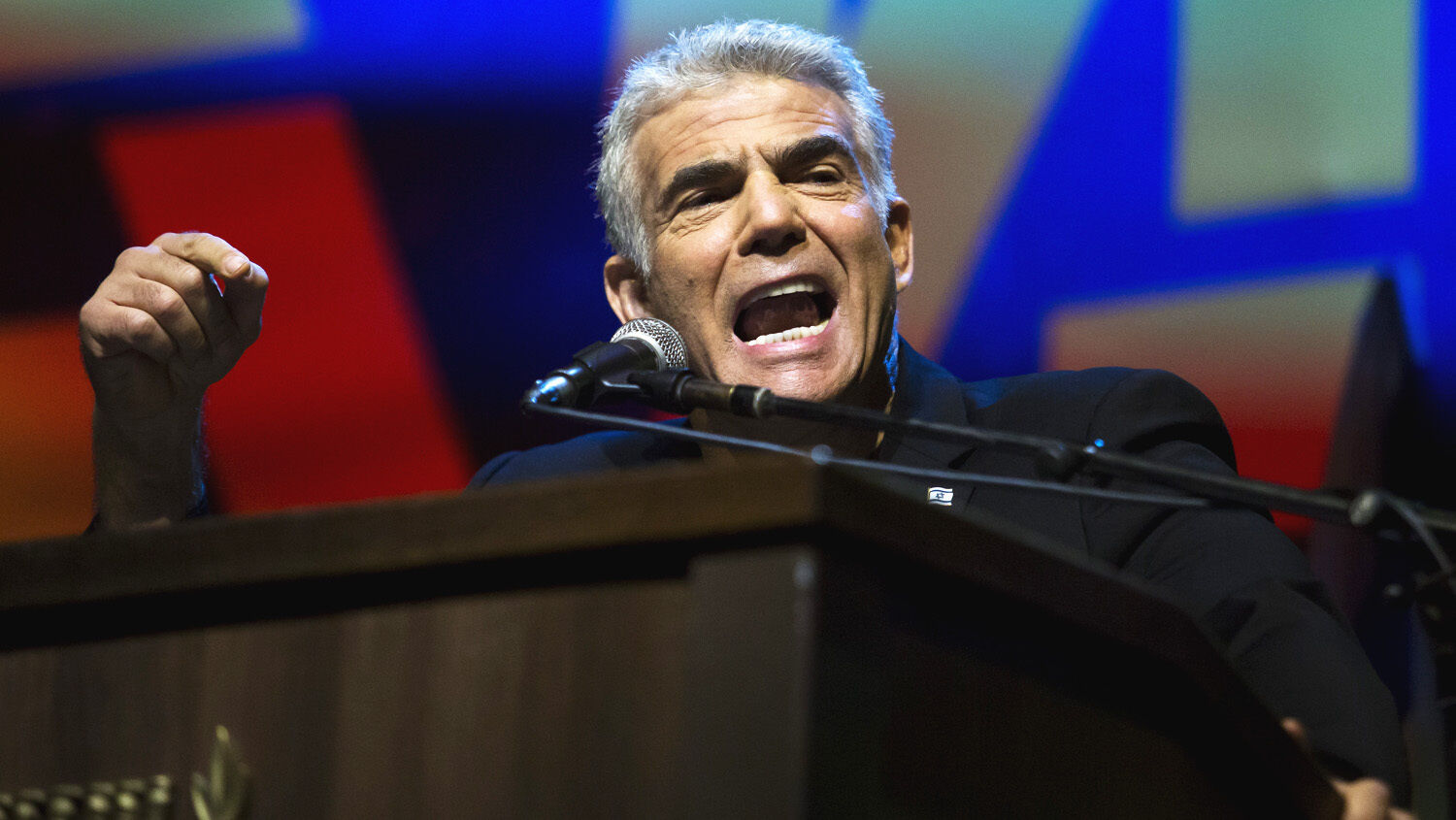 Yair Lapid speaks at a protest against Netanyahu’s Immunity Law on May 25, 2019, in Tel Aviv, Israel.
Amir Levy/Getty Images

As Israel heads into new elections, watch what Jerusalem’s new prime minister does.

The Israeli Knesset voted on June 30 to dissolve the government and schedule new parliamentary elections for November 1. This brings an early end to the rule of Israeli Prime Minister Naftali Bennett.

Bennett, prime minister for just over a year, had a power-sharing agreement with Yair Lapid. Lapid, whose Yesh Atid party was the largest in the previous coalition, needed Bennett’s Yamina group to form a Knesset majority. Their deal was this: Bennett would start as prime minister, then alternate with Lapid, who would be foreign minister, halfway through the government’s term.

There was a catch: Most of the members of the coalition belong to left-wing parties; Yamina is right-wing. If the coalition were to fall apart due to right-wing defections, per the agreement, Lapid would take over as interim prime minister until the following election.

Bennett resigned the night after the Knesset vote. Lapid is now Israel’s prime minister until November. What does this mean for Israel?

One would think an interim leader would do what he needs to keep the government running but little more. But not Lapid. He held a press conference with Bennett on June 23, stating: “Even if we are going to elections in a few months, the challenges we face will not wait. We need to tackle the cost of living; wage the campaign against Iran, Hamas and Hezbollah; and stand against the forces threatening to turn Israel into a non-democratic country.”

From his statement, we can expect to see Israel continue to oppose Iran. With Tehran ramping up its controversial nuclear program, Israel can’t afford not to. This is a policy that most major Israeli parties, left and right, support. But how exactly will Prime Minister Lapid go about it?

Ever since 2020, Israel has begun a rapprochement with the Muslim world. Under the so-called “Abraham Accords,” Israel established diplomatic relations with several Muslim-majority countries: Bahrain, Kosovo, Morocco, Sudan and the United Arab Emirates. Israel already had relations with Egypt, Jordan and Turkey. The Israeli government is deepening ties with many of these states to counter Iran.

Rumors are circling that Israel will next open relations with Saudi Arabia. United States President Joe Biden is visiting Saudi Arabia later this month supposedly for that purpose. Axios in a June 22 article cited “four U.S. sources briefed on the issue” that the White House is preparing a “road map for [Saudi-Israeli] normalization.”

A full-normalization agreement at this stage is unlikely. Riyadh is not opposed to a rapprochement with Israel, but the Palestinian issue needs to be addressed first. Bloomberg quoted Saudi Crown Prince Mohammed bin Salman in a March 3 article: “We do not view Israel as an enemy, but rather as a potential ally in the many interests that we can pursue together, but some issues must be resolved before we can reach that. We hope that the problems between the Israelis and the Palestinians will be resolved.” Yet some simpler agreements could be made in the meantime. For example, the Saudis could let Israeli flights use their airspace.

The Biden administration has pledged to continue brokering the Arab-Israeli peace deals. Yet this has been stalling since Biden took office. At that time, Prime Minister Benjamin Netanyahu was still in power. Ahead of a March 2021 Knesset election, Netanyahu was on his way for a peace deal signing ceremony in the U.A.E. However, Washington pressured Abu Dhabi to postpone the ceremony until after Israel’s election to avoid any “electioneering” on Netanyahu’s part. In other words, the Biden administration—a continuation of the Israel-hostile Barack Obama administration—didn’t want to let the trip increase Netanyahu’s chances of reelection. (To give some perspective, in 2015, the Obama administration funded V15, an Israeli political organization campaigning to have Netanyahu voted out of office.)

The Israeli government’s response (or lack thereof) to recent Arab-Israeli unrest has been making it unpopular. Netanyahu’s Likud party is currently polling as the most popular. There is a decent possibility Netanyahu could reemerge as prime minister in November. Washington is willing to let the Israeli prime minister “electioneer” with Arab peace deals if he’s campaigning against Netanyahu.

Notice also that Lapid in his speech said he would “stand against the forces threatening to turn Israel into a non-democratic country.” That most likely is a veiled reference to Netanyahu. In an April 2020 essay, Lapid accused Netanyahu of “openly pushing to dismantle [Israel’s] democratic structures.” He accused Netanyahu of prioritizing “security over justice or liberty.” He called Likud “anti-democratic” and standing for “radicalism.”

Netanyahu is currently on trial for corruption charges many see as politically motivated. The trial would have kept going with or without Lapid as head of government. But now that such an anti-Netanyahu and anti-Likud character as Lapid has the government’s top job, there may be more political pressure to convict Netanyahu. Lapid’s interim status means the legislature is dissolved. This means he isn’t dependent on keeping every Knesset member in a fragile coalition happy to stay in power. A swift conviction would eliminate his greatest political rival. This means we could see the government work extra hard to send Netanyahu to prison.

In other words, expect one of Yair Lapid’s main goals to be to end Benjamin Netanyahu’s political career for good. With Netanyahu out of the way, the Israeli left could march forward with their policies. Lapid seems to actually have more control over the government with the current situation than he would have with the regular arrangement. Perhaps he was hoping Bennett’s premiership would collapse for this reason. He could try to consolidate his power with an improved electoral result in November.

What kind of major projects does Lapid hope to push forward?

It’s unknown if he’ll work on this during his interim premiership, but he may address the Palestinian question. Lapid previously said he’s open to making a “two-state solution” with an independent Palestine during his premiership. “I want to separate from the Palestinians,” he said in 2021. “I don’t have any interest in ruling over 2 million Palestinians in Gaza or 2.9 million in Judea and Samaria [the West Bank].”

With the Knesset dissolved, he is in a stronger position than ever to help make an independent Palestine a reality.

Such an outcome would be a dream come true for the current U.S. administration. It would also be such for countries like Saudi Arabia. That may be why Washington and Riyadh are suddenly so supportive of the government in Jerusalem.

It would also be a dream come true for Iran. Tehran has a proxy empire of Islamist states and movements all over the Middle East and Africa. This includes the Palestinian territories. Iran already controls Gaza through its proxy Hamas. If Israel disengages from the West Bank as well, Iran could also take over that territory. That would put it right on the doorstep to Jerusalem—the third-holiest city to Islam. It wouldn’t take long for carnage over the city to erupt.

The Biden administration strongly endorses this Bibi-less Israeli government. It’s what they have always wanted. And by always, I mean it is what Barack Obama fought hard to achieve during his time in office.

This is understandable. To the Biden administration, Netanyahu represented the major roadblock slowing Obama’s vision of a radically reshaped Middle East. For six long years, Netanyahu countered the antagonistic Obama administration as it sought to downgrade ties with Israel and the Gulf states in favor of the radical Islamists of the Persian variety or that of the Muslim Brotherhood in Egypt. Netanyahu’s rebuke started in private but then burst into the open in order to counter the lies of the Iran nuclear deal.

Filled with the very same Obama boys, the Biden administration is continuing to finish what Obama tried to achieve in his first two terms.

Getting rid of Netanyahu, the remaining international leader unafraid to publicly expose and thus blow the cover off the Biden administration’s hostile anti-Israel actions and Iran embrace, was a needed part of the strategy.

This is why Israel—and the world—should beware a Yair Lapid premiership. And this is why the world should watch what happens to Benjamin Netanyahu between now and November.