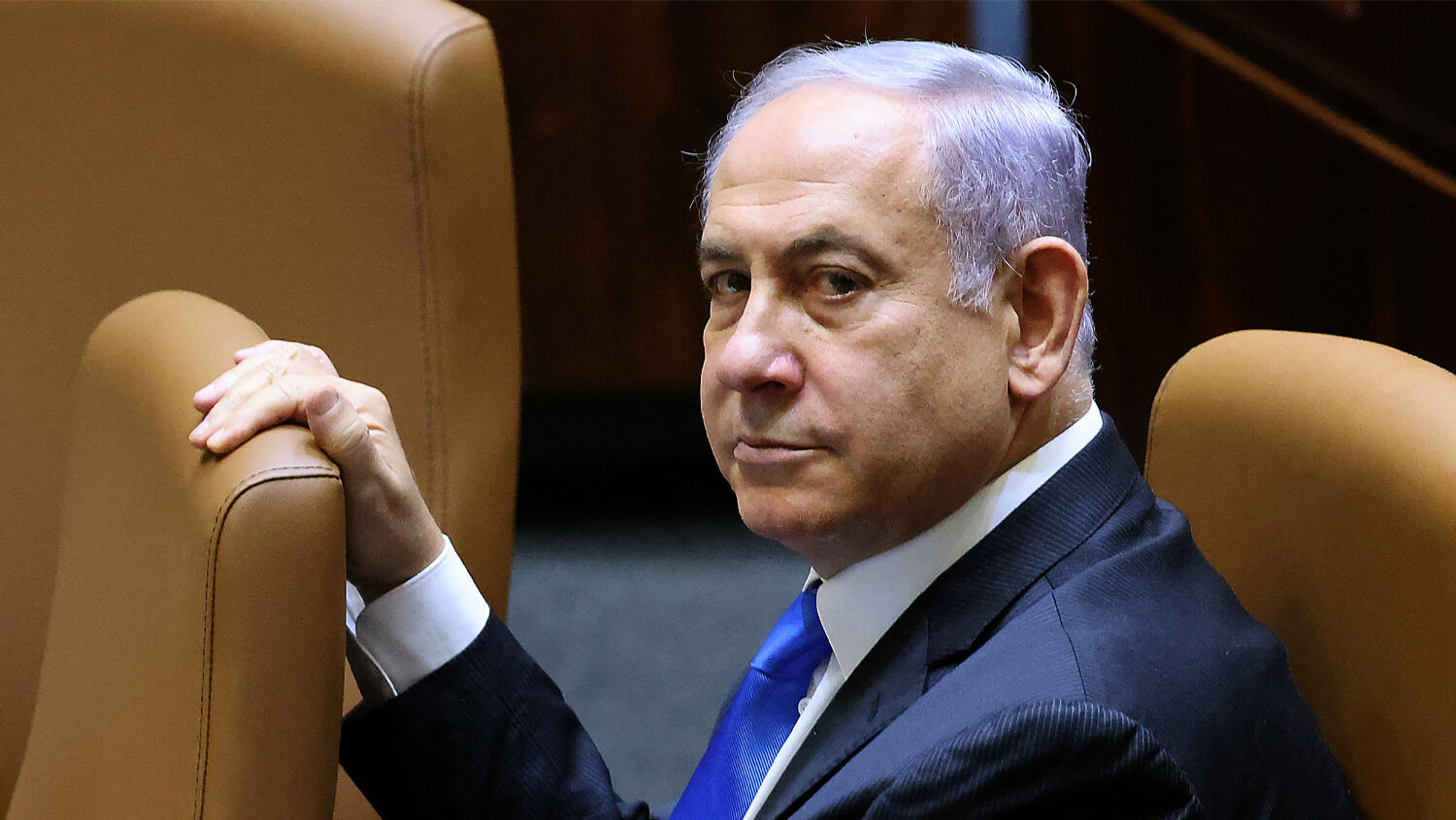 Israel’s Prime Minister Benjamin Netanyahu attends a special session to vote on a new government at the Knesset in Jerusalem, on June 13, 2021.
EMMANUEL DUNAND/AFP via Getty Images

America right now is in the middle of a colossal and historic unmasking. It began with the November 2020 election and Joe Biden’s subsequent inauguration in January 2021. Ever since, the radical-left’s malignant presence in America has been systematically and dramatically exposed.

There is still much yet to be revealed, including a much fuller understanding of the man pulling the levers behind the scene, and the invisible mastermind behind him. But it is now pretty obvious: The great unraveling is underway. The truth is coming out.

Remarkably, a similar unmasking appears to be underway in Israel.

The man at the center of it all is Benjamin Netanyahu, Israel’s former prime minister. Much like Donald Trump, Mr. Netanyahu is adored by many and deeply despised by a few. Much like it is in America, the minority in Israel who despise Mr. Netanyahu are not without significant power and resources. And these people, much like their counterparts across the Atlantic, have brandished their power with tremendous effect.

There’s little doubt these people are responsible for Mr. Netanyahu leaving office last June. It took three elections in the space of two years for him to leave, and only then it was only because he faced relentless, corrupt opposition. Like Trump, Netanyahu battled radical-leftist opponents, especially in the media and in some of Israel’s key institutions, who would do almost anything to destroy him.

Mr. Netanyahu is currently on trial for bribery, corruption and breach of trust. It all began in 2016, when the police first began investigating him. Netanyahu denied the charges and the police failed to find compelling evidence. Even still, in February 2018 the police formally recommended that Israel’s prime minister be prosecuted. In November 2019, on the eve of the third election, Israel’s radical attorney general, Avichai Mandelblit, announced that he was indicting Mr. Netanyahu. This marked the first time a prime minister has been prosecuted while in office.

All through the trial, and all through the three election campaigns, Mr. Netanyahu maintained his innocence and defended himself against what he called an unfounded, corrupt “witch hunt.” The attacks were relentless. He was routinely called a racist, fascist and an arch-murderer. He was labeled as a war criminal and compared to Adolf Hitler. And not just by marginal, inconsequential journalists and politicians. A popular Haaretz columnist referred to him as a “supremacist” and wrote that his “entire reelection campaign is hatred.” Another popular paper wrote that a new Netanyahu government would be “xenophobic hell.” Another called him the “prince of darkness.”

According to the media and many prominent politicians on the left, Benjamin Netanyahu was the most corrupt, amoral politician on Earth. The Jerusalem Post said he was engaging in “despicable demagoguery disdaining democracy.”

As it turns out, it is now growing ever more obvious that Netanyahu’s radical-leftist opponents are the ones who displayed a “despicable demagoguery disdaining democracy.”

Over the past few days, it has been revealed that Israel’s police in recent years have illegally hacked the phones of dozens of private citizens, business leaders, journalists and government officials. Aides of Benjamin Netanyahu, and even his own son, are reported to be among those who were illegally spied on.

It’s early days and the Pegasus affair as it is being called (Pegasus is the name of the software used in the spying) is only just beginning. New information is emerging daily, much of it highly condemning of Israel’s police and justice departments. “This is an earthquake,” Netanyahu said over the weekend.

Some believe the scandal could bring down the current coalition government, casting Israel into another leadership crisis. Beyond the political consequences, many are alarmed by the attack on democratic principles, especially the right to privacy; many view it as proof that Israel is now an Orwellian surveillance state.

For Benjamin Netanyahu, the Pegasus affair could be a godsend. The way it looks at the moment, the police not only illegally spied on Netanyahu officials, it then used information gathered during the illegal spying campaign to build its case, including to secure witnesses against Netanyahu. Some in Israel are calling for Israel’s new attorney general to use the Pegasus affair as an opportunity to reexamine Netanyahu’s indictment.

Right now we’re not exactly sure of the extent to which the police spied on Netanyahu. On Saturday, the Times of Israel reported (emphasis added throughout):

Other prominent figures involved in former Prime Minister Benjamin Netanyahu’s criminal trial likely had their phones hacked by police investigators, Hebrew tv reports claimed Friday, a day after the networks revealed that police drained data from the phone of Shlomo Filber, the former Communications Minister director-general who is one of the key state’s witness in Case 4000, the most serious of the three cases against the ex-premier.

Channel 13 reported that a second defendant … “apparently” had his phone targeted by police spyware. …

Channel 12, for its part, quoted an unnamed senior police official saying that an unspecified number of other people connected to the Netanyahu cases were … targeted by police using spyware. “The State Prosecutor’s Office was aware. It’s not just Filber. There are others, and everything was done with the approval and authorization [of the state prosecution],” the official was quoted saying, contradicting anonymous prosecution officials who have been quoted in recent days claiming that police investigators illicitly used phone hacking software without their knowledge.

In America, evidence obtained illegally like this would be inadmissible at a criminal trial. Israel’s legal system is different and it’s too early to know if evidence gained illegally will be allowed to be used in trial. The full extent of the spying and the impact it had on the prosecution’s case against Netanyahu is unknown. The trial has been put on hold while the government and relevant authorities investigate the scandal and figure out a path forward.

The revelations over the next few days and weeks will be crucial. It’s possible the entire case against Netanyahu could be dismissed! If it isn’t dismissed, or postponed indefinitely, the Pegasus affair provides Netanyahu powerful evidence he can use in his defense. No doubt about it, this is a boon for Israel’s former prime minister, a man still incredibly popular with Israelis and no doubt hoping to return to office.

Gideon Levy is an esteemed author and a popular left-wing columnist for Haaretz, one of Israel’s most left-leaning newspapers. His column from this past Sunday about the Pegasus scandal was scathing. “Who is destroying the rule of law in Israel?” he asked. “After years of hearing a particularly shrill choir scream about the existence of one enemy to the justice system, the arch-Satan, demon of destruction, Benjamin Netanyahu by name, suddenly we learn that the true enemy comes from within the system.”

Sound familiar? A similar realization is happening in the U.S., where for years we were told Donald Trump was America’s number one problem. Turns out, the very people making that accusation are the problem.

Levy continued: “The scope of the rot is yet to be fully revealed, as is the degree of involvement by the prosecution and the scope of malicious surveillance. The lies of the police, its officers and the minister overseeing them are a grave matter, but one conclusion is already clear: The police, and perhaps the prosecution as well, have decided to incriminate Netanyahu by nearly any means necessary.”

Whatever happens in the coming days and weeks, it’s now plain as day: Bibi Netanyahu is not receiving fair and lawful treatment.

“It is becoming clear that his and his supporters’ claims were true, at least to some degree,” Levy wrote. “Perhaps not outright framing—that will be revealed in trial—and not the overthrow of a sitting prime minister by the justice system, but certainly an unbridled manhunt to incriminate him.”

The parallels with the radical-left’s persecution of Donald Trump are obvious and remarkable. In America, we now know that Barack Obama and top Democratic leaders used the Central Intelligence Agency, Federal Bureau of Investigation and Justice Department to create the narrative (and legal case) that Trump colluded with the Russians to steal the 2016 election. Now everyone agrees or concedes the entire Russia collusion scandal was one gigantic lie!

Moreover, today we see more clearly than ever that Obama and the radical left are guilty of committing the very crime they accused Mr. Trump of committing: stealing an election!

Will the same truths become evident in Israel through the Pegasus affair? The corrupt, lawless behavior of the police and Justice Ministry might result not only in the Netanyahu trial being dismissed, but also the exposure of the deep hatred and lawless thinking of Israel’s radical-left movement. Is Israel also experiencing the colossal and historic unmasking of the radical left?

The great unraveling is underway and clearly it is not confined to America. And it is only just beginning.