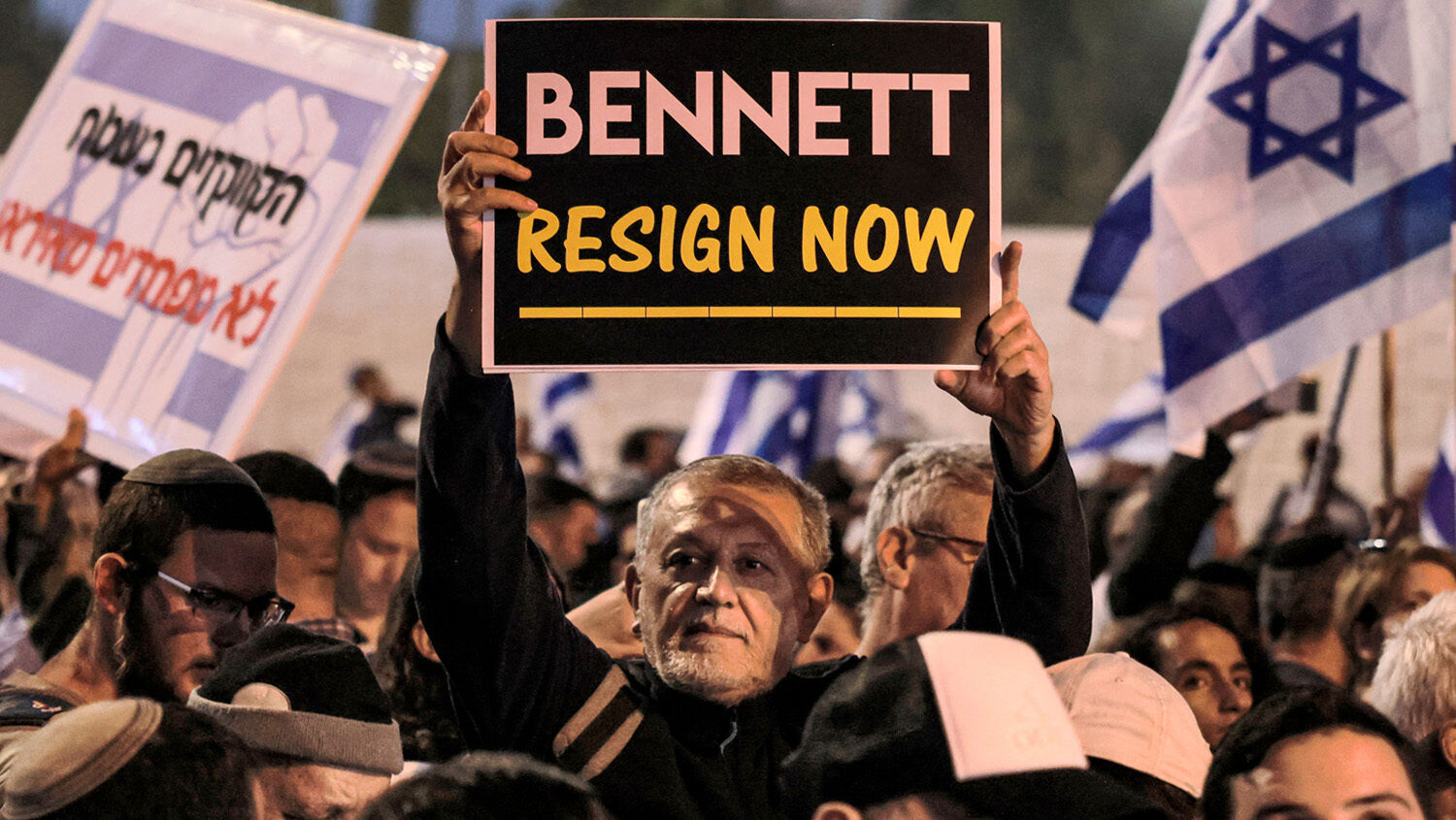 A man holds up a sign calling for Israeli Prime Minister Naftali Bennett’s resignation during an antigovernment protest by Israeli right-wing supporters in Jerusalem on April 6.
MENAHEM KAHANA/AFP via Getty Images

Last Wednesday morning I watched one of the most stunning bits of news commentary I’ve ever seen. It was a segment from Tucker Carlson’s show on Fox News that showed footage of Barack Obama’s first visit back to the White House after leaving office. It showed an increasingly fragile Joe Biden looking lost in his own house, while all the attention was paid to the former president. It was clear who was the most powerful man in the room, and it wasn’t Mr. Biden.

No doubt, if you have read the Trumpet for any length of time, you will know why Obama’s disrespect at the White House confirms much of our commentary from the past 12 years. And if you don’t, you must watch Stephen Flurry’s Trumpet Daily program titled “The Real Fake President,” recorded last Wednesday.

But more than just the footage, it was Carlson’s interpretation that impacted me. According to Carlson, the footage was a clear sign that “King Obama” and the Democratic Party had decided to jettison President Biden. “Biden can’t lead, and so at some point soon, he won’t be allowed to lead. It is that simple,” Carlson stated at the end of the segment.

According to Carlson, Obama’s White House visit was the beginning of the end for Biden’s presidency.

This was stunning to me because the same day I read almost the same commentary—but not applied to the Biden administration.

Instead, it was about Israel.

“No one could say with certainty how it would happen, or when it will happen, but most agree that it is just a matter of time before Prime Minister Naftali Bennett’s unique government is brought down.”

This statement from the Jerusalem Post was motivated by the shock announcement Wednesday morning that a Knesset member from Bennett’s own Yamina party, Idid Silman, decided to break with the prime minister and desert to the opposition.

This brought the number of members in Bennett’s coalition down from 61 to 60. For a 120-member Knesset, this means Bennett’s government will not be able to receive a majority vote to move any legislation forward. Also, now that one member has jumped ship, there is every reason to believe that more will soon follow. So after just 10 months in office, Bennett looks to be done. “Silman’s announcement put into motion a process that will bring about the dissolution of the current government,” wrote the Jerusalem Post.

Thus, in the span of 24 hours last week, both Bennett and Biden were put on notice that their time is almost up.

The fact that the writing is on the wall for both is hardly surprising, considering that both were brought to power through a machine larger than themselves, and both “won” elections through nefarious means. Mr. Biden was the only viable option as the Democratic Party nominee and, as about half of Americans now believe, became president by cheating.

Mr. Bennett’s rise to power was a little less sinister. He obtained legal votes, but only because he lied to his voters.

But after the election, Naftali Bennett betrayed his voters and sided with the left to rip the crown off Benjamin Netanyahu’s head and put it on his own.

Based on after-election polling of Yamina voters, had Bennett declared his openness to side with the anti-Netanyahu bloc, he would have lost 60 percent of his vote. Put simply, this means that had Naftali Bennett not lied to Israel, he would not be prime minister-designate. Instead, those voters would have flocked to the Netanyahu’s bloc, likely continuing his tenure in power. Furthermore, had Bennett not lied to Israel, the Yamina party would likely not have received enough votes to clear the electoral threshold (3.5 percent). Meaning, that Naftali Bennett would not have even been in politics.

Thus, if Bennett didn’t lie before the election, Benjamin Netanyahu would most likely have continued to be prime minister of Israel.

Hence, Mr. Netanyahu called the coalition agreement that put Bennett at the helm the “greatest election fraud in Israeli history and in the history of democracies.” “People feel—justifiably so—that they have been conned,” he said later.

Now, just 10 months later, it all seems to be unraveling for Bennett. After Silman’s defection, Bennett’s party only has the backing of five of the 120-member parliament. That represents just over 4 percent of the electorate.

As to why Silman left Bennett is simple. Technically, it was the government’s decision to allow leavened bread in state-run hospitals over Passover. But the real reason is far bigger than that.

Israel is currently experiencing the worst round of Arab-on-Jew terrorist attacks since the Second Intifada. In the past three weeks, at least 13 Israelis have been murdered in a spate of knife and high-powered weapon attacks. The latest took place on Saturday night in Tel Aviv’s popular restaurant neighborhood, where two gunmen killed three young men and injured scores of others. Both terrorists were killed, but only after an intense manhunt that lasted several hours.

Even before Saturday’s attack, there were clear signs that the government led by Bennett would not hold. The coalition is already a hodgepodge of left-, center and right-wing parties. It also includes an Arab party affiliated with the Muslim Brotherhood. As Caroline Glick noted on her podcast two days before Silman left the government, the climate of terror calls for a strong response that this coalition cannot provide:

When Jewish blood is again flowing in the streets of Israel and you have everybody over the age of 35 still suffering from Post Traumatic Stress Disorder from the Palestinian war in the early years of this century. I think that this government is going to have a very hard time not responding. [But] it won’t respond, because of the way that it is built—because of its members, its composition. I think that it won’t be four years before we see new elections in Israel; I think it will be much faster.

While there is still time for Bennett to work out some deal to briefly stay in power, the writing is on the wall. And if the attacks continue, it will be hard for other right-wing politicians to justify staying inside the government that has a tepid response to terror.

However, before the right rejoices that fresh elections will lead to a return of Benjamin Netanyahu, there is another obstacle; one that means it could get worse before it gets better.

By virtue of the power-sharing deal that brought Bennett to power, in the event that the government fails, Yesh Atid leader Yair Lapid will be the interim prime minister. Yesh Atid is ideologically akin to the Democratic Party of the United States. While it will be a government without a mandate from the people, Lapid will lead the nation through the election process. Recent history has taught us that this can be a long, drawn-out process.

As Tucker Carlson noted in his monologue, just how the Democrats replace Biden remains to be seen. And who they replace him with could be even worse for the nation.

Nevertheless, it now seems like a majority of voters in both America and Israel recognize that not only were they defrauded, but that rectifying the election steals is of paramount importance.

Considering both nations are experiencing similar political overhauls at the same time, is it possible that there is a similar cause? Trumpet editor in chief Gerald Flurry answers this question in his booklet America Under Attack (free upon request). As he explains, both the United States and the Jewish nation of Israel (as well as the British Commonwealth) are the descendants of the ancient Israelite tribes that once lived in the territory encompassing the limits of the Jewish state today.

As Bible prophecy proves, these tribes were to become separate powerful nations in the latter days (Hosea 5:5). The Bible also relates that these nations would experience unparalleled blessings based on the promises given to their ancient forefather Abraham. However, God’s promised gift of those blessings would eventually be replaced by curses caused by national disobedience. And weakened by lawlessness, the nations of Israel would open themselves up to bitter attack from the inside. We are witnessing that inside attack right now.

Caroline Glick noted the “Israel under attack” connection in her podcast last week. “This government in the United States and the government in Israel that is now controlling the levers of power here are both threats to the very nature and the very existence of our country.”

Will there be a turn back to the likes of Benjamin Netanyahu and Donald Trump in power? As Mr. Flurry has explained, Bible prophecy shows that Mr. Trump will return to office, briefly. Perhaps too, Netanyahu will reclaim his position in Israel.

Such a return to power will be met by most Americans and Israelis with confidence that things will get better. This may be the case temporarily. But since it will not bring about a renaissance of law-keeping or fidelity to biblical morals, it will not heal the wounds deeply dividing our nations. Those cannot be solved by human means. That is why only God’s direct intervention will save the nations of Israel.

The Prophet Isaiah said that when you see truth falling in the streets, such as the election steals in both countries, where lies persevere and truth fails, then know that God sees it too—and even that will motivate Jesus Christ’s return. Isaiah 59:15-16 state: “Yes, truth is gone, and anyone who renounces evil is attacked. The Lord looked and was displeased to find there was no justice. He was amazed to see that no one intervened to help the oppressed. So he himself stepped in to save them with his strong arm, and his justice sustained him” (New Living Translation).

To maintain your focus on these hope-filled prophecies in the midst of crisis, please request Gerald Flurry’s free booklet Jerusalem in Prophecy.