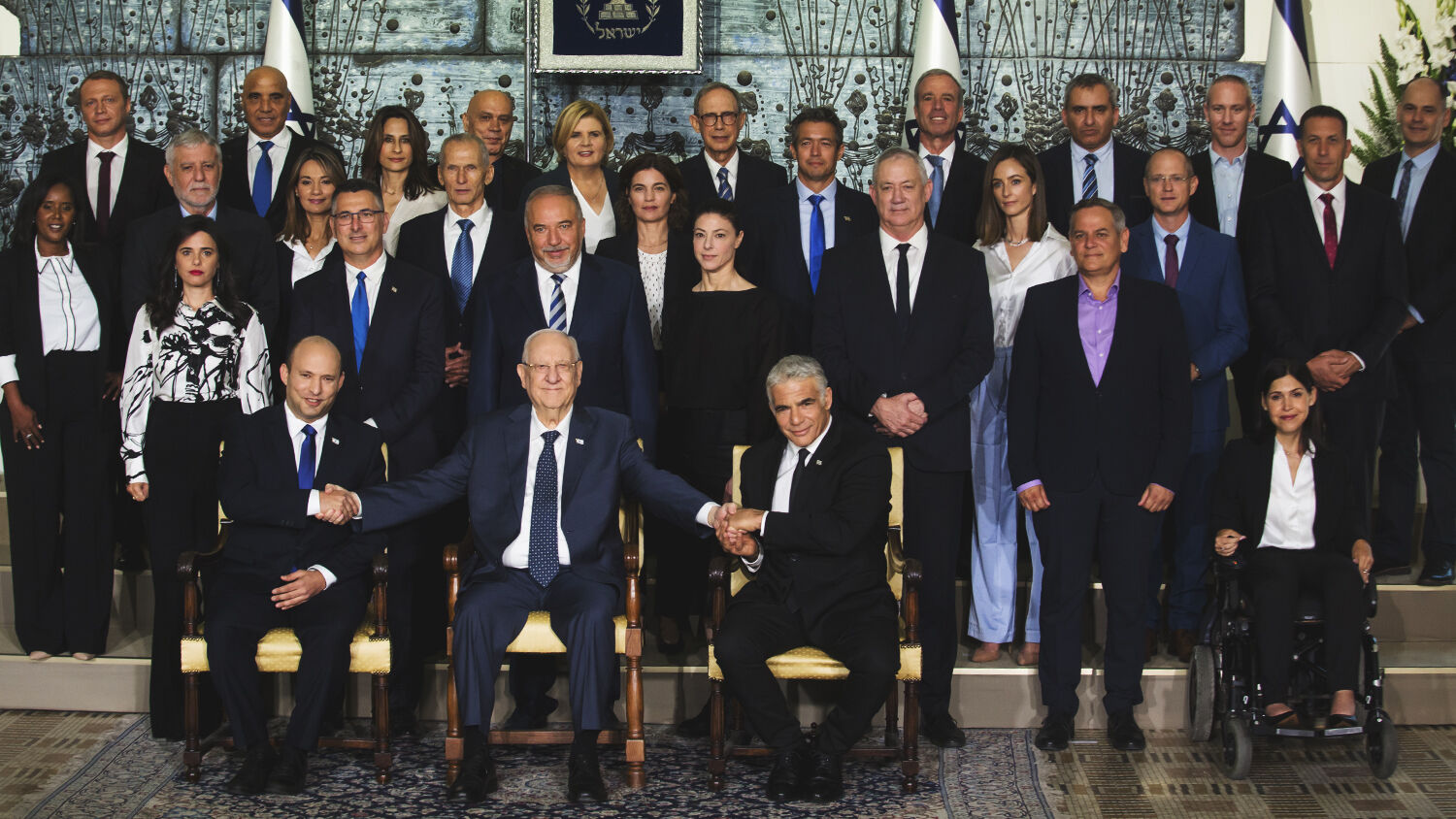 Israeli President Reuven Rivlin sits next to Israeli Prime Minster Naftali Bennett and Foreign Minister Yair Lapid as they pose for a group photo with minsters of the new Israeli government on June 14, 2021 in Jerusalem, Israel
Amir Levy/Getty Images

But can it heal the broken Israel-U.S. brotherhood?

Contrary to Israeli media hype in the lead-up to the swearing-in ceremony at the Knesset, Netanyahu didn’t raise an insurrection, nor start a war with Hamas, in order to bust up Bennett’s coalition before the vote. Instead, there was a peaceful and visible transition of power. After some fiery speeches in the Knesset, Netanyahu switched seats to become the leader of the opposition.

The Biden administration, and about half of Israel, couldn’t be happier.

Revelers at Tel Aviv’s Rabin Square partied the night away with joy and tears. Sunday’s changeover of power was an emotional achievement, the realization of a decade-long struggle to oust the chief villain of Israel’s right.

Singer Achinoam Nini (also known as Noa) symbolized the mood of the crowd when she took to the stage singing a version of “We Will Rock You.” Then she added, “We got rid of Haman,” likening Netanyahu to the fifth-century b.c. Persian official who set out to ethnically cleanse the Jews from the known world. Such is the hatred among some of those who wanted Netanyahu gone.

“We got rid of Haman” - what the left thinks of Netanyahu. Likening him to the 5th-century Persian official that tried to wipe out the Jewish race. https://t.co/i3QtiRKJPL

The Biden administration’s disdain for Netanyahu wasn’t in any snarky comments against the former prime minister, but it was felt in the immediate embrace of the new government.

In a perfectly orchestrated play, official statements of congratulations from Biden’s team rolled in while the night was young.

“On behalf of the American people, I congratulate Prime Minister Naftali Bennett, Alternate Prime Minister and Foreign Minister Yair Lapid, and all the members of the new Israeli cabinet,” Biden said in a statement. “I look forward to working with Prime Minister Bennett to strengthen all aspects of the close and enduring relationship between our two nations.”

He immediately followed that up with a personal phone call with Bennett.

U.S. Secretary of State Anthony Blinken issued his own statement of congratulations for Bennett, and immediately followed up with a call to Lapid. Not to be outdone, U.S. Defense Secretary Lloyd Austin also spoke to his Israeli counterpart, Defense Minister Benny Gantz, following the swearing-in ceremony.

The message was clear: The Biden administration strongly endorses this Bibi-less Israeli government. It’s what they have always wanted. And by always, I mean it is what Barack Obama fought hard to achieve during his time in office.

This is understandable. To the Biden administration, Netanyahu represented the major roadblock slowing Obama’s vision of a radically reshaped Middle East. For six long years, Netanyahu countered the antagonistic Obama administration as it sought to downgrade ties with Israel and the Gulf states in favor of the radical Islamists of the Persian variety or that of the Muslim Brotherhood in Egypt. Netanyahu’s rebuke started in private but then burst into the open in order to counter the lies of the Iran nuclear deal.

Filled with the very same Obama boys, the Biden administration is continuing to finish what Obama tried to achieve in his first two terms.

Getting rid of Netanyahu, the remaining international leader unafraid to publicly expose and thus blow the cover off the Biden administration’s hostile anti-Israel actions and Iran embrace, was a needed part of the strategy.

On Sunday, we got a sense of what Israel will miss from Netanyahu as he delivered his last speech as prime minister from the Knesset podium.

“The prime minister of Israel needs to be able to say no to the president of the United States on issues that threaten our existence,” Netanyahu said. He went on to mention his 2015 speech before Congress where he destroyed the merits of Obama’s nuclear deal before the American people. Netanyahu then added, “Who will do that now? Prime Minister Yair Lapid? … This government does not want and is not capable of opposing the United States.”

Netanyahu continued, “The new US administration requested that I save our disagreements on the Iran nuclear deal for behind closed doors, and not share them publicly. I told them I won’t act that way.” He then compared U.S. efforts to reenter the Iran nuclear deal to the decision by U.S. President Franklin Roosevelt not to bomb the train tracks to Auschwitz in 1944.

And yet, even with all its military might, it’s hard to see anyone from this new government who would dare publicly expose the Biden administration.

In his own remarks before the Knesset Naftali Bennett stated that open rebuke for the United States will not be the policy of his government: “We greatly appreciate the support of the United States, our greatest friend. My government will make an effort to deepen and nurture relations with our friends in both parties—bipartisan. If there are disputes, we will manage them with fundamental trust and mutual respect.”

Bennett’s remarks would be perfectly applicable to any normal U.S. administration. But not one that is fundamentally opposed to strengthening the State of Israel.

This contrast of styles between the outgoing and incoming administration of how to deal with the U.S. is indicative of the broader change that has happened with Netanyahu’s ouster.

Naftali Bennett will only be prime minister for two years, after which it will go to Yair Lapid. In fact, Bennett is only prime minister because Lapid offered him the job to get him to join the coalition to oust Netanyahu. The offer was too good for Bennett to refuse. Thus, he broke his promise to his right-wing voters and joined the government.

However, the real power behind this government is Lapid. His Yesh Atid party received the second-most votes in the last election and, as such, he became the chief architect behind the formation of the coalition.

As Yair Rosenberg explained last week in Tablet, “This is Yair Lapid’s coalition, everyone else is just living in it. The coalition was negotiated by Lapid and will have a majority of ministers from the center and left, in deference to their greater numbers. And the government will rely on the votes of an Arab party for its continued existence. In other words, Lapid outfitted Bennett in a golden straitjacket—giving him the trappings of power without the ability to fully exercise it.”

Put another way, Israel now has a right-wing prime minister without any power to exercise conservative values. Bennett is entirely beholden to the doctrine of Yair Lapid if he wants to retain his job. And since he lied his way to the top, he can’t blow up the government because he’ll likely not be voted into office again.

And comparing Lapid to the American political system, he is about as Democrat as you can find. As such, this will be a government whose policies largely align with the base of the Democratic Party of the United States.

Lapid’s longtime campaign strategist is Mark Mellman, whom John Kerry used for his 2004 presidential campaign as have a host of other Democratic leaders, including former Senate Majority leader Harry Reid. In 2019, Mellman was replaced by Joel Beneson, Obama’s own strategist in advising Lapid and Blue and White. After the breakup of Blue and White, Mellman returned to advise Lapid.

Regarding relations with the United States, Lapid has long disagreed with Netanyahu’s face-off with Obama. In 2014, as a one-time member of Netanyahu’s government, Lapid set up his own secondary channels to talk to Obama officials including John Kerry and Ambassador Dan Shapiro. Eventually, the backdoor dealing of Lapid with the Obama administration contributed to Netanyahu dissolving the coalition with Lapid and breaking up the government.

No doubt, now in 2021, the Biden-Obama administration couldn’t be happier that Lapid holds the reins of power in Israel.

All the while, as the right-wing front man, Naftali Bennett will provide the perfect justification to continue the Biden administration’s anti-Israel position, as well as the hostile international media narrative against the Jewish state.

Concurrently, Yair Lapid, with the support of Israeli media, academia and a rogue Supreme Court, will start to replace the traditional biblically based values of the Jewish state with the “democratic values” of Israel’s elite.

In the short term, this is a horrific turn of events for Israel’s future.

Nevertheless, it’s somewhat understandable why many Israelis are willing to give this government a shot.

Even for those who don’t agree with all of Lapid’s leftist values, it might be worth supporting his government to attempt to heal the rift between the U.S. and Israel.

Israelis long to return to the era of bipartisan support with the U.S., even if that means risking being led by a leftist government.

For the last 40 years, the United States has stood with Israel as its closest and most powerful ally. More than a relationship of convenience, the U.S.-Israel bond is a brotherhood of shared values and shared history. Even now, the familial bond is likely still shared by most of their peoples. For Israelis of all stripes, it hurts to see that relationship in tatters.

Purposefully, the overwhelming media narrative in both countries blames Netanyahu and Donald Trump for that division. With both gone, it’s hoped the brotherhood can return.

However, as Trumpet editor in chief Gerald Flurry proves in his booklet America Under Attack, the assault on the Israeli-American brotherhood did not begin with Netanyahu and Trump—it was spiritual in its origin. That hostility surfaced in the foreign policy of President Barack Obama who openly stated his desire to “fundamentally transform the United States.” As he did that, it was only a matter of time until he fundamentally transformed the relationship with the Jewish state.

Given that Obama’s men are in power once again, the hostility toward the Jewish State will continue regardless of who leads Israel. Only now, the one man most aware of the nature of this fight has been removed from power. The United States will not go easy on Israel now that Lapid’s government is in power. The question then becomes, how far will Yair Lapid be willing to go to appease an increasingly hostile America?

As Mr. Flurry wrote last month, the relationship is likely to get so bad that Israel will need Trump to return to power. Perhaps Netanyahu will return to power at the same time.

Nevertheless, the Bible declares that this brotherhood between Israel and the United States will be broken in the latter days. As Trumpet executive editor Stephen Flurry documented in “Band of Brothers,” the modern State of Israel and the United States are the modern descendants of two of the ancient tribes of biblical Israel. Both nations were chosen by God to be the recipients of some of the most precious promises ever given to man. And because of this shared history with God, both nations are under increasing attack from the inside and out.

To understand why the futures of the United States and Israel are increasingly intertwined, it’s important to be aware of their shared biblical roots. If you haven’t yet, please order your free copy of Herbert W. Armstrong’s most popular book, The United States and Britain in Prophecy to prove their origins. It will also explain how, one day soon, God will make the brotherhood between Israel and America stronger than it has ever been.