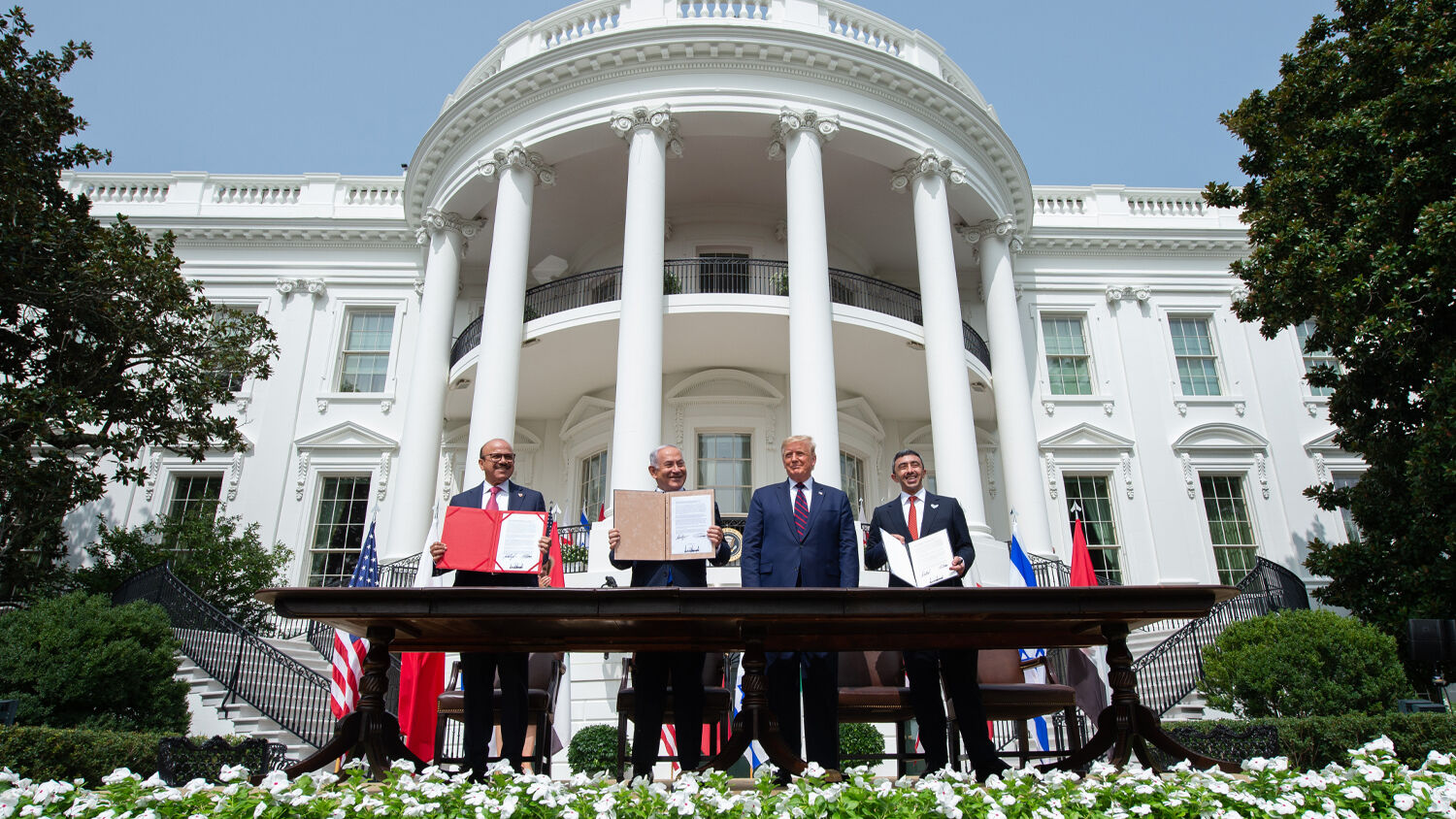 Are Israel and the United Arab Emirates being sacrificed on the altar of Iranian appeasement?

Israel and the United Arab Emirates had a spat ahead of the March 23 Israeli election. Israeli Prime Minister Benjamin Netanyahu was to attend a summit in Abu Dhabi days before the elections. U.A.E. Crown Prince Mohammed bin Zayed, considered by many to be the country’s de facto ruler, canceled the summit. He claimed the reason of the cancelation was his offense at Netanyahu looking for a diplomatic photo-op days before the election. Former U.A.E. Foreign Minister Anwar Gargash said the U.A.E. “will not be a part of any internal electioneering in Israel, now or ever.”

Although the summit was to be held in Abu Dhabi, it was a signing ceremony between Israel and Sudan. Sudan is another Arab state that formed diplomatic relations with Israel last year.

The U.A.E.’s excuse has some problems with it. The nation apparently had no problems with holding the summit roughly a week earlier. The summit was originally scheduled for March 11. Abu Dhabi even sent a private jet to pick up Netanyahu. However, while the jet was grounded in Jordan, awaiting instructions to proceed to Tel Aviv, Jordan refused airspace permission for the trip. The Jordanian government meant this as a jab at Netanyahu. The U.A.E. aircraft had to turn around.

The reason Israel and the U.A.E. even have relations is because of the Abraham Accords, brokered by United States President Donald Trump in August 2020 just a few months before the U.S. presidential election. Giving President Trump a foreign-policy “photo op” for his reelection campaign didn’t seem a big a deal for the U.A.E. And if they were so worried about “election engineering,” why did they go out of their way to send a private jet for Netanyahu? Why couldn’t the prime minister fly himself over to Abu Dhabi?

The United Arab Emirates is an absolute monarchy, so it doesn’t have elections of its own. So why would it care about “internal electioneering” in a different country? And wouldn’t it be normal for Netanyahu, if he thought he could be voted out, to make one last visit to keep relations with the Arab world steady for the next administration to take over?

Furthermore, a signing ceremony would have made the U.A.E. look better than it would have Israel. It could have helped give the U.A.E. a reputation as a peacemaker. The U.A.E. already has brokered peace talks between India and Pakistan. Hosting a signing ceremony between Israel and Sudan, a former pariah state trying to normalize relations with the rest of the world, would have also helped the U.A.E. Considering that the Middle East is better known for aggressive warmongers like Iran and Turkey, you would think the U.A.E. would like the press.

Here’s the real reason the Abu Dhabi summit was canceled: Washington got in the way.

Bin Zayed wanted the Biden administration involved in the summit. According to a report on Axios, “U.S. officials liked the idea and agreed to send a senior official, but stressed it wanted it only after the Israeli elections.”

In other words, it seems U.S. President Joe Biden is the one more concerned about “election engineering.”

The U.A.E. has reasons to knuckle under to Washington. Biden has already made clear his disagreements with Abu Dhabi. The Trump administration, in its final days, approved billions of dollars’ worth of weapons sales to the U.A.E., including 50 coveted F-35 stealth fighter jets. Democrats in Congress tried to stop the purchase, but to no avail. Once Biden took office, he put the sale on hold, even though the deal was signed. After Biden took office, the U.A.E. scaled back its involvement in the Yemeni civil war and its support for rebels in the Libyan civil war. Biden has called for the involvement of foreign states in the Yemeni civil war—which includes the U.A.E.—to stop.

Perhaps Abu Dhabi thought it not wise to rattle Biden’s Washington any more than it has.

The big question is, are Biden and his associates trying to stop Netanyahu’s reelection? It wouldn’t be the first time. The Obama administration, when Biden was vice president, gave $350,000 to the OneVoice organization. OneVoice was sponsoring V15, a campaign to oust Netanyahu during upcoming Israeli elections.

But why would the Biden administration want to remove the Israeli prime minister? Israel is America’s best friend in the Middle East—and, for that matter, one of America’s best friends anywhere. The reason is most likely because the Biden White House sees Benjamin Netanyahu and his conservative policies as an obstacle to an independent Palestinian state with East Jerusalem as its capital.

But there may be another reason Biden is trying to undermine the Israeli-U.A.E. friendship. It may be because of Iran.

One of U.S. President Barack Obama’s most noted foreign policy attainments was the 2015 Iran nuclear deal. We at the Trumpet have written extensively on why that deal wouldn’t stop Iran from obtaining nuclear missiles and how it supported its terrorism sponsorship around the world. Yet it was still considered one of Obama’s greatest foreign-policy achievements. When President Trump took office, it didn’t take him long to abandon the nuclear deal. Now that Obama’s No. 2 man is in the Oval Office, Washington is keen to resurrect the deal.

There’s one problem: Iran isn’t that interested in a new deal.

Iran has already ramped up its uranium production using centrifuges forbidden under the nuclear deal. It is testing rocket technology that can be converted into nuclear missile technology. Iranian Supreme Leader Ayatollah Ali Khamenei in a recent speech said he wasn’t in a rush to rejoin the deal. “We shouldn’t burn opportunities, but we shouldn’t hurry either,” he said. “We have a lot of patience and will continue to do our own thing. If they accepted and implemented our desired policy, everything will be fixed. If not, things will remain as it is and there’s nothing wrong with that.”

The conditions Tehran wants in return for its presence at the negotiating table is the removal of all U.S. sanctions. The sanctions were originally removed as part of the 2015 deal; now Iran wants them removed before it even comes to negotiate. And that’s disregarding the sanctions Biden has already removed from Iran; Iran has received $15 billion worth of frozen assets from the U.S. government withdrawing sanctions.

It’s pretty clear that Iran’s not going to negotiate in good faith, and it won’t tame its aggressive foreign policy. But that isn’t stopping Biden from bending over backward to restart negotiations.

While the U.A.E. isn’t Iran’s biggest enemy, Abu Dhabi is still a thorn in Tehran’s side. The U.A.E. is a member of the Saudi-led coalition in the Yemeni civil war fighting Iran’s Houthi proxy group.

The U.A.E.’s establishing diplomatic relations with Israel is especially problematic for Iran. Iran wants to “wipe Israel off the map.” It calls Israel “the little Satan.” Many suspect Tehran’s nuclear ambitions are for the purpose of attacking Israel.

But Israel already has nuclear weapons. Even without nuclear weapons, the Israeli military is one of the most formidable in the Middle East. The U.A.E. also has a strong military; former U.S. Defense Secretary Jim Mattis once called the U.A.E. the “little Sparta.” Both Israel and the U.A.E. have wealthy economies; now that they can openly trade together, they can use each other’s economies to become even more powerful. The Abraham Accords paved the way for other Arab states, like Sudan and Morocco, to recognize Israel’s legitimacy.

An alliance between Israel and moderate Arabs, both with large economies and militaries, would be a disaster for Iran.

So is the Biden administration trying to sever Jerusalem and Abu Dhabi from each other to placate Iran? Why would America want to appease Iran in the first place? It is the world’s largest state sponsor of terrorism. It supports murderous regimes in Syria, Lebanon and Gaza. It sponsors jihadist militias in Yemen and Iraq. It orchestrates terrorist attacks in nations around the world. The ayatollah’s religion, Twelver Shiism, advocates for the chaos that a nuclear World War iii could bring. It makes no sense why Washington would bend over backward for Iran.

That is, unless you understand what the Bible says about American politics today.

Mr. Obama’s appeasement of and support for the Iranian regime cannot be explained logically. Such a catastrophic policy can only be understood in the context of the satanic deception that blankets this entire world (Revelation 12:9). Those efforts shoved the world closer to the brink of nuclear annihilation—and nothing could please the devil more! “[T]hat old serpent, called the Devil, and Satan, which deceiveth the whole world” had his fingerprints all over those developments. He passionately hates mankind and loves causing the death of millions—even billions!