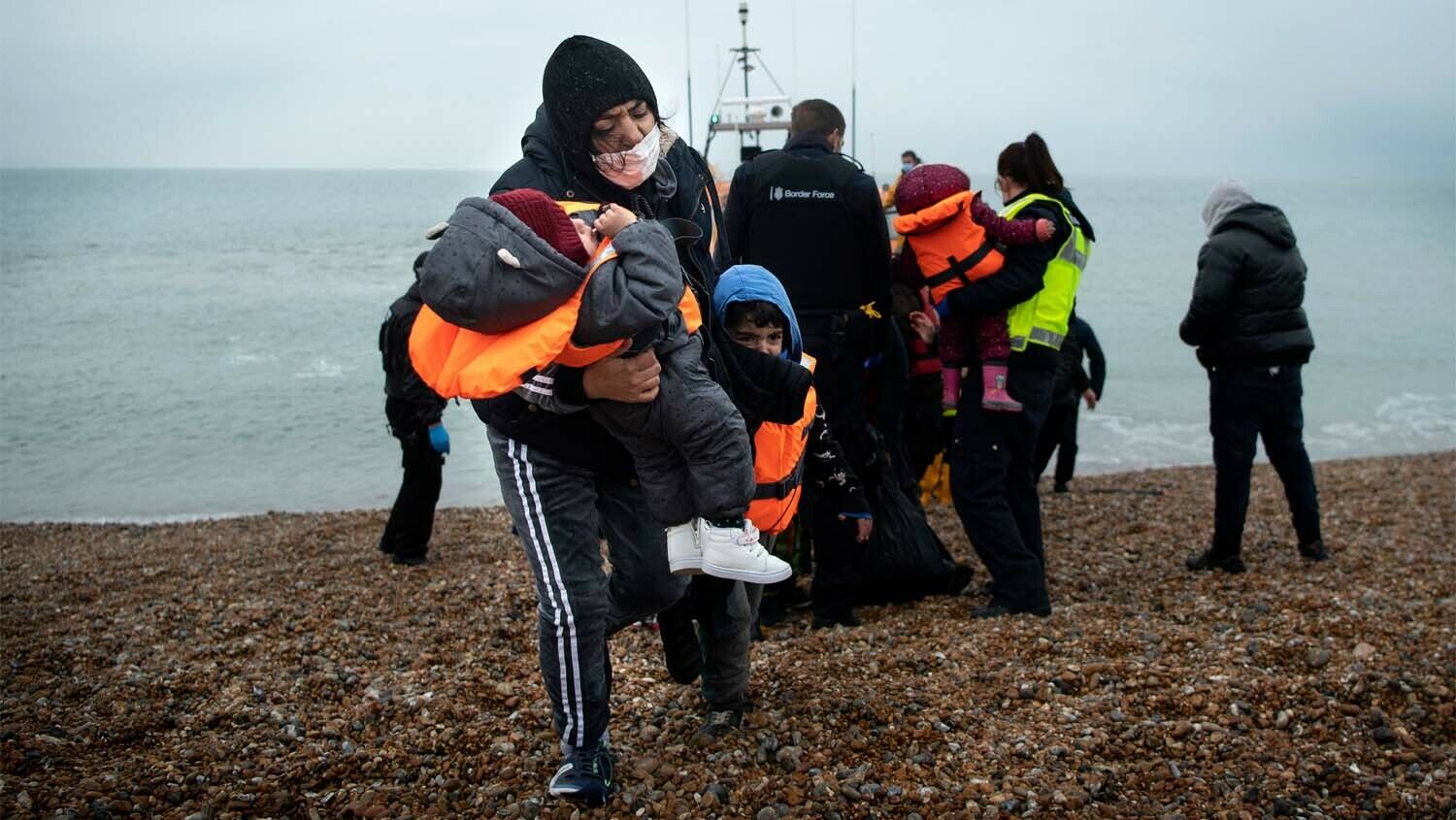 A migrant carries her children from a lifeboat at a beach in Dungeness on the southeast coast of England on Nov. 24, 2021, after being rescued while crossing the English Channel.
BEN STANSALL/AFP/Getty Images

What’s going on in the mind of Emmanuel Macron?

In 2021, 28,381 migrants crossed the English Channel to the United Kingdom, making 2021 the busiest year for cross-Channel migration ever, the Telegraph reported on December 31. By comparison, 8,410 migrants were documented in 2020. In 2021, British authorities captured 1,020 boats used by migrants. The busiest month was November, with 6,869 migrants. The migrants come from countries like Syria, Iran and Afghanistan. It’s understandable why many of these people would take such big risks to escape their homelands. The Middle East is constantly reeling from conflict, persecution and tyranny. But migrants have to pass a lot of countries—with about the same levels of prosperity as Britain—to make it from the Middle East to an island in the North Sea. So why Britain?

Since 2020, France has been hit hard with various Islamist terrorist attacks. Since then, France has been marginalizing its large Muslim population. But that hasn’t stopped masses of refugees and other migrants making their way to France. In 2020, the European Union received over 470,000 asylum applications from migrants. France alone received 62,067 first-time adult asylum applicants that year. That’s not counting children or those who didn’t apply for asylum. Some of the terrorists implicated in recent attacks came to France as migrants. So France can’t be blamed for wanting the migrants to be gone.

France and Britain have cooperated on stopping cross-Channel migration. Since 2015, London has invested millions of pounds in the French security services. France estimates that it spends $135.5 million for policing the English Channel.

However, there is evidence that Paris is using the migrant crisis to its advantage.

In the lead-up to a November meeting of European interior ministers in Calais, France, British Prime Minister Boris Johnson sent a letter to French President Emmanuel Macron. But instead of sending it to Paris, he uploaded the letter on Twitter. He listed a few proposals on how the British and French governments could better monitor their mutual border. In particular, Johnson suggested that migrants found on the other side of the Channel could be returned to France.

My letter to President Macron. pic.twitter.com/vXH0jpxzPo

Uploading a memo directed to a fellow world leader on Twitter is unusual. But Macron’s response to the letter hints at more than a little hostility. French Interior Minister Gérald Darmanin canceled British Home Secretary Priti Patel’s invitation to Calais. French government spokesman Gabriel Attal called the letter “mediocre in terms of the content, and wholly inappropriate as regards the form.” Attal told a French news agency the letter was “mediocre because it does not respect all the work that has been done by our coast guards, police, gendarmes and lifeboat crews.”

According to the Times of London, French security personnel intercept less than 50 percent of migrants crossing the English Channel. Some estimate the rate is closer to 30 percent. Policing an international maritime border is difficult. And it’s not like the French authorities on the ground aren’t trying to do their job. But a success rate of less than 50 percent would understandably raise a few eyebrows in London.

“What we need is for the British to send immigration officers to France to examine here, on French territory, demands for asylum in Britain,” Attal continued. Perhaps that’s a good idea. So why is the British home secretary given such a high-profile snub?

Tony Smith, a former head of the UK Border Force, told the Telegraph he suspects there’s an ulterior motive. He accused Paris of “turning a blind eye” to the migrant crisis out of “spite” for Brexit. “This particular French government [is] not interested in sitting down with Priti Patel about this because they don’t want the migrants back,” he said.

In a radio interview, Gérald Darmanin even implied Britain was to blame for the migration crisis. “Everyone knows that there are more than a million illegal immigrants in the UK and that English employers use this workforce.” He claimed that the illegal immigrant labor market made Britain “too attractive” to migrants.

London and Paris are well known for their often public spats. But this bout of tension is especially notable. A similar crisis is occurring at the other end of Europe.

Since last summer, the European Union has been in a standoff with Belarus. The isolated Russian puppet state is ruled by ironfisted strongman Alexander Lukashenko. Ever since his (almost certainly) rigged election in 2020, Brussels has slapped economic sanctions on him. This was exasperated when Belarus skyjacked a plane carrying a dissident journalist. In revenge, Lukashenko has been ferrying migrants from the Middle East to Belarus. From there, he has sent them across the border to the EU member states of Poland, Lithuania and Latvia.

Poland has been aggressive in trying to stop the migrants from entering, using “pushbacks”—security personnel forcing migrants back across the border to Belarus—with Brussels’s blessing.

Despite the pushbacks, thousands of migrants were able to enter Europe. Germany alone registered over 11,000 migrants from the Belarus-Poland route in 2021. Germany is the EU’s richest member state and borders Poland. It’s often the final destination for migrants entering Europe. Many more refugees are probably in other member states, but Germany’s 11,000 comprise a sizable amount of the total number of migrants, if not the majority.

When 11,000-plus migrants flow into the EU from Belarus, it’s a problem that is to be met with force. But when 28,000 migrants cross from France to Britain, that’s Britain’s problem.

But there’s more to this than hypocrisy: Combine this with France’s blockade of the British Crown Dependency of Jersey last summer, France’s overreaction to Britain’s aukus alliance with America and Australia, and France’s closure of Calais to British trade in 2020, causing a supply line crisis.

All of this combined with the migrant crisis (and Patel’s snub) suggests some sort of irrational hostility toward Britain. And this is from a country that, on paper, is a military ally. For about 150 years, France and Britain have sided with each other in most major conflicts. They were allies in the Crimean War, World War i, World War ii, the Suez Crisis and other conflicts. Yet the days of London and Paris being close allies seem to be over.

Late theologian Herbert W. Armstrong proved that the British people are descended from the ancient people of Israel. (Please request a free copy of The United States and Britain in Prophecy for more information.) To the patriarch Abraham, forefather of the Israelites, God promised to make of his descendants “a great nation” (Genesis 12:2). God promised Abraham’s grandson Jacob that his progeny would be “a company [or commonwealth] of nations” (Genesis 35:11). When dying, Jacob blessed his grandson Ephraim, saying he would obtain the “greater” blessing “and his seed shall become a multitude of nations” (Genesis 48:19). Ephraim’s descendants eventually became the British people, and the prophecy was fulfilled in the great British Empire.

Joseph, Ephraim’s father, was betrayed to slavery by his brothers (Genesis 37). Reuben was the eldest and saw what was going on but didn’t protect his younger brother, despite knowing better. This incident will have modern parallels. Our editor in chief Gerald Flurry wrote in his article “France Is Betraying America and Fulfilling Bible Prophecy!”:

Reuben, the firstborn, wouldn’t boldly stand up to his brothers. He tried to “rescue” Joseph in a weak, evasive way. It was a betrayal that ended up enslaving his younger brother!

Your Bible says Reuben’s modern descendants will again betray the latter-day descendants of Joseph—America and Britain! …

We are seeing the beginning of that betrayal today!

That article was written in 2019. Since then, France under Emmanuel Macron has given plenty more jabs at Britain. And these jabs hint at a much deeper enmity than just a brotherly spat. To learn more, please read “France Is Betraying America and Fulfilling Bible Prophecy!”