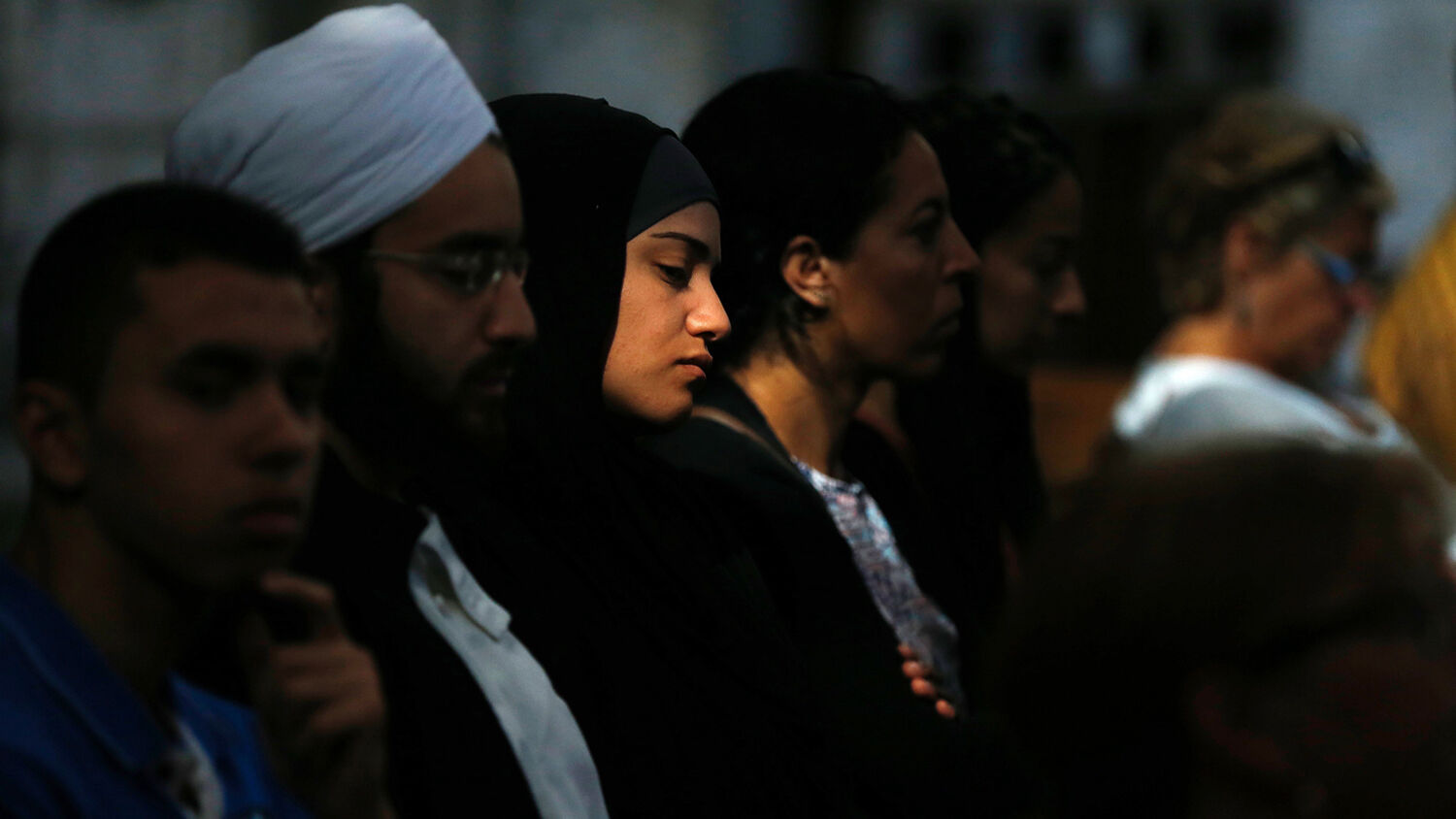 A Muslim woman attends a Mass in tribute to priest murdered by jihadist teenagers in France.
CHARLY TRIBALLEAU/AFP/Getty Images

While tightening the rules for one religion, the president gives acceptance to another.

France’s National Assembly passed a new law on July 23, placing heavy regulations on religious groups, particularly Islamic ones. It contains strict new requirements on how these groups must report to the government, and seeks to reduce the wearing of religious symbols in public. Paradoxically, French President Emmanuel Macron, who supports the bill, has taken unprecedented steps to draw closer to the world’s largest religion.

Religious neutrality of society, the government and public institutions is legally enshrined in the French Constitution. The 1905 law on the “Separation of the Churches and the State” is the foundational document for this pillar of French society. Several additions have since been proposed and adopted.

The most recent of these is the “bill to strengthen the respect of the principles of the republic.” It has been criticized by left-leaning parties as too harsh and going beyond the government’s sphere of authority over the lives of citizens. Others, on the right, have said it is too weak and demanded more concrete actions.

Have the government’s efforts to make society religiously neutral gone too far? It is looking that way more and more. Are the government, and the head of state, truly neutral? Recent developments indicate they are not.

Tightening the Vise on Islam

Under the new law, the government can shut down religious gatherings it judges to be preaching incitement to hatred or violence. This can be done without a court order. The definition of hatred or incitement to violence is open to interpretation. While this type of teaching is a problem, the new law risks the abuse of governmental powers.

All religious groups are now required to obtain a permit from the government, which must be renewed every five years. If they receive funds from abroad, their accounts must be audited each year.

Many of the criticisms of this law have centered around the restrictions on Muslims who wear their religious clothing in public. Wearing Islamic headscarves, already banned for government employees, is now illegal for those operating public services, such as public transport. Other proposed rules, which didn’t make it into the law, include barring parents from wearing religious symbols on school field trips and outlawing the “burkini,” a bathing suit that conforms to Sharia law. The latter has been a topic of heated debate in France for quite some time.

The law also regulates intimate family decisions. Parents who choose to homeschool their children must receive government authorization of the curriculum they will teach. Muslim men who refuse to allow their wives to be examined by male doctors face fines of up to €75,000 (us$89,000) and up to five years in jail.

France does face a growing threat from Islamic fundamentalism. According to a poll for the committee of the republic on secularism, 57 percent of youths between 15 and 24 years old consider Sharia law more important than the laws of France.

However, despite all the talk of maintaining the secular state, President Macron has openly drawn closer to another religion: Christianity.

Only a week before the new law was passed, Macron visited the town of Lourdes on July 16, where he visited the historic church of Notre Dame de Lourdes. Other presidents have visited the town, but Macron is the only president to have entered the sanctuary. Lourdes is a major holy site for Catholics, welcoming millions of pilgrims each year.

His hands joined in prayer, Macron became the first French head of state since 1941—during the Vichy regime—to make what was perceived by many as a pilgrimage.

Macron is not known for making policy according to Christian principles. During his visit, media filmed a man heckling the president, yelling, “Shame on you” and calling him a “primitive atheist.” Macron recently presided over the passing of a law allowing children to be conceived via medically assisted fertilization—paid for by the government. His moral convictions are not those of a conservative Catholic.

Yet Macron has all but declared his support for the Catholic Church. By cracking down on Islam while paying his respects at Catholic holy sites, he is sending the message that Catholics need not worry—their religion will remain in the state’s good graces.

This is a policy that will have consequences for France and for all of Europe.

The End of Church-State Separation

The Trumpet pays close attention to the interactions of European leaders with the Catholic Church. Despite the separation of church and state, the French government is now seeking power over religious groups. The Bible warns that church-state separation will ultimately disappear, leading to the seventh resurrection of the infamous Holy Roman Empire.

In Bible language, a church is often symbolized by a woman. Revelation 17 describes a church that is heavily involved with the leaders of this world (verse 2). In the next verse, this “woman,” or church, is described as sitting on a “beast,” representing religious control over a political and military superpower. Is such a thing possible today? In our book The Holy Roman Empire in Prophecy, we wrote:

Looking at Europe today, it is difficult to imagine the appearance of another Charlemagne, Napoleon or Hitler. The idea of Europe participating in another destructive global conflict, let alone initiating one, seems impossible and outrageous. …

One can understand this perception. After all, the world hasn’t been frightened by a European military since the Second World War. Europe continues to ward off economic and financial ruin, as well as social unrest and revolt. Europe is multicultural and sophisticated, and a world leader in defending human rights and environmental activism. …

But 1,500 years of European history should warn us against underestimating the Holy Roman Empire—and the Vatican. We must not merely look at Europe in its current state. It must be studied in its historical context.

Both history and Bible prophecy warn that Europe will once again come under the influence of the Vatican, and of a strong German leader. The current period of secular government and tolerance toward all religions should not be seen as permanent. It is already nearing its conclusion. For a full understanding of why the president of France is toughening his stance on Islam while drawing closer to the Catholic Church, order or download a free copy of The Holy Roman Empire in Prophecy.