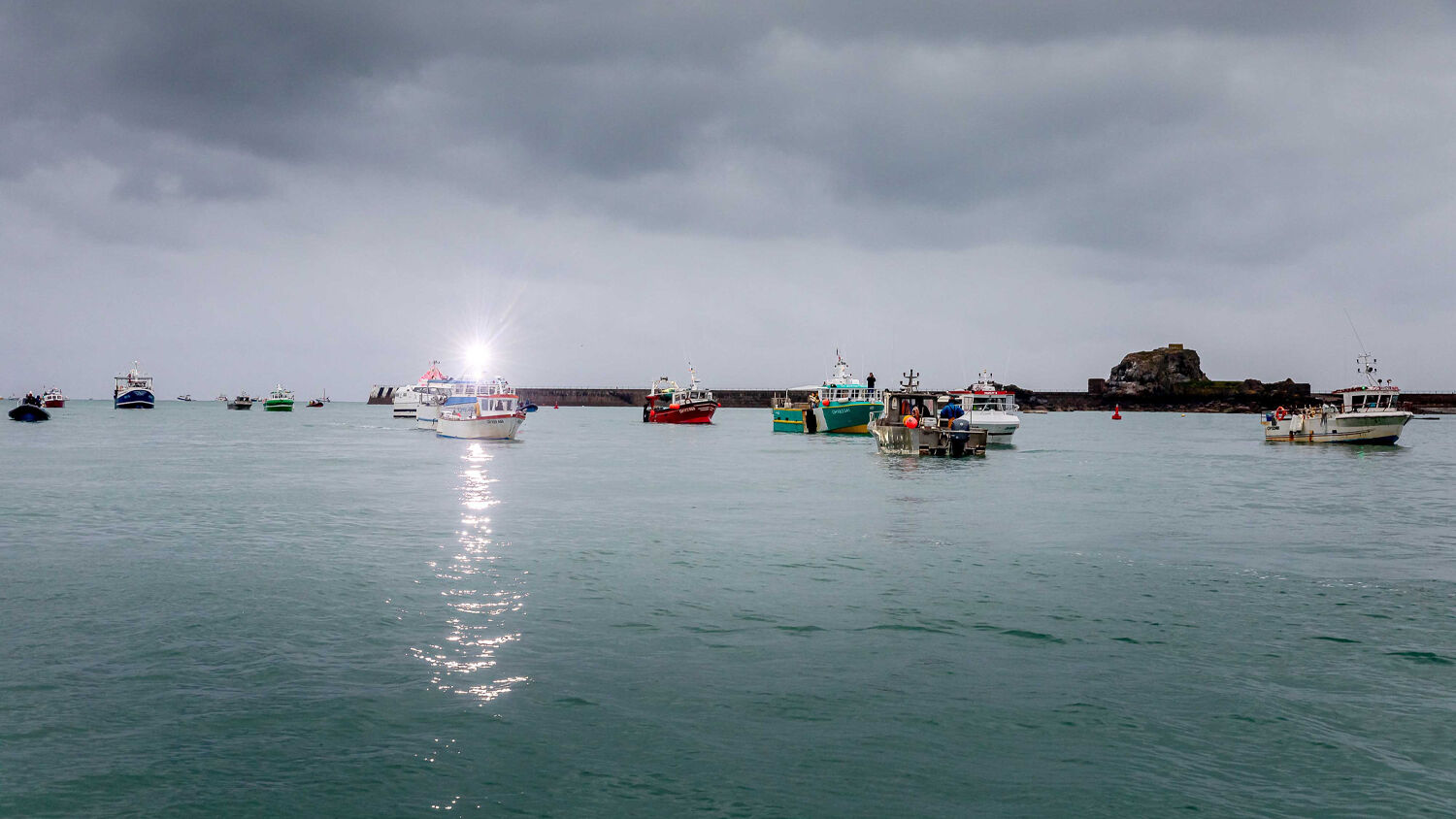 French fishing boats sail into the harbor in protest against the new fishing licenses on May 6 in St Helier, Jersey.
Gary Grimshaw/Getty Images

With the backing of Europe, France is showing its willingness to push Britain out of Europe’s economy.

Hundreds of French fishing boats descended on the small port of St. Helier, capital of the British Channel Island of Jersey, on May 6. A blockade of the port ensued, with the fishermen protesting a change in the rules governing their access to the waters around the island. The situation, which began as a dispute over paperwork, quickly escalated into an international incident and highlighted a concerning tendency: France is becoming increasingly hostile to Britain and more willing to push it out of the European economy.

The dispute began over a relatively small matter. Brexit changed the process by which French fishermen obtain a license to fish in Jersey’s waters. Jersey had to first be informed of the routes they planned to sail. Jersey is only 14 miles off the coast of France, and French fishermen have frequented these waters for years without much contention. What changed?

Beyond the politics and rhetoric on both sides, there is a rising tide of French hostility toward the United Kingdom. More and more often, France is resorting to blockades—through border controls and economic regulations threatening to cut off energy supplies—in order to get what it wishes.

According to the Daily Mail, the French flotilla blocking St. Helier numbered approximately 100 boats at its peak. Fishermen set off flares, and one rammed a British fishing boat. The Royal Navy sent two patrol boats to break up the blockade, and France responded by sending two of its own.

“We’re ready for war,” declared David Sellam, head of the Normandy-Brittany Sea Authority. “We can bring Jersey to its knees if necessary.”

Other French politicians have already thought of ways to accomplish this.

“Concerning Jersey, I’ll remind you of the transport of electricity via submarine cables,” stated Annick Girardin, France’s minister of fisheries. “I would regret it if we have to do it, but we’ll do it if we have to.”

Jersey receives 95 percent of its electricity from France through the state-owned electric company edf. Three undersea cables connect the island to the French mainland.

This is not the first time France has threatened to reduce or cut off electricity exports to the UK. During Brexit negotiations in October 2020, French President Emmanuel Macron said he would cut the amount of electricity France sells to the UK if French fishermen were not allowed to take more fish from British waters.

Strong words also came from the British side. Adm. Lord West, a member of the House of Lords in the UK Parliament, condemned the threats. “Shutting off electricity to a foreign country is nothing short of international gangsterism. The very idea of it shames a great democratic nation such as France,” he wrote in an opinion piece for the Daily Mail.

Other British commentators noted that turning energy into a weapon to blackmail another nation is common practice for Russian President Vladimir Putin when it comes to pressuring Ukraine. However, a democratic, Western European nation openly threatening the UK, one of its closest partners in matters of defense, is a relatively new occurrence.

This is only one example of France’s blockade strategy with the UK in recent times. In December 2020, France closed the port of Calais to British trade. This stranded thousands of transport trucks in British ports, along roadsides and in special waiting areas at airports. Though France blamed coronavirus for the shutdown, many saw it as a foretaste of what Europe would do to Britain in the event of a no-deal Brexit.

France’s blockade strategy also operates in the world of finance. According to a May 13 article from Bloomberg, French diplomats are working to stop a deal between the UK and the European Union which would grant British firms expanded access to European financial markets. When the UK left the EU, some British firms lost access to these European markets because of EU regulations. “Since Brexit took effect at the beginning of 2021, London-based financial firms have been largely unable to operate in the bloc, forcing banks like JPMorgan Chase & Co. and Goldman Sachs Group Inc. to move billions of dollars in assets and thousands of staff to the Continent,” reported Bloomberg. France now wants to use access to European financial markets as a bargaining chip to get its way in negotiations with the UK.

For the entire 20th century and into the 21st, France worked closely with England on issues from defense to diplomacy. It fought on Britain’s side during the First World War. During the Second World War, a large number of French fought alongside their British counterparts to hinder the Nazi invasion of their country. Cooperation deepened with the Cold War and subsequent defense projects.

Now that Britain has left the EU, however, all that seems to be changing. Should France’s blockade strategy be cause for concern in the long term?

There is certainly a historical basis for such concern. From their earliest days, Britain and France have come into conflict on land and, of course, at sea. Blockades were often a part of the sea warfare between them. One notable example is the Continental System, Napoleon Bonaparte’s trade embargo on Britain in response to the Royal Navy’s blockade of France during the Napoleonic Wars.

Yet there is an even greater reason why everyone needs to watch France’s increasing tendency to resort to blockades.

The same source that predicted Britain’s break from the EU also predicts that France, with Germany and other nations of Europe, will turn against Britain, and besiege it economically.

That source is Bible prophecy. Isaiah 23 describes a “mart of nations” that will work together to economically besiege Britain, the United States and the State of Israel, shutting them out of world markets. This will include 10 nations, or groups of nations, in Europe, as well as Russia, China and Japan. The prophecy is also found in Ezekiel 5, which speaks specifically of a siege. An alliance between Europe and Asia would control a vast portion of the world’s capital. Its military power would also be overwhelming. Prophecy shows that these nations will besiege Britain, the U.S. and the Jewish state, first economically, then militarily.

The blockade of Jersey was short but revealing. With full backing from the EU, France has waged a war of words against the UK and threatened to punish another sovereign nation with electricity cuts. Despite this, it has not faced any serious condemnation from other European countries. Hostility toward the UK is being allowed to increase, unchecked.

The same Bible prophecy that predicted Europe’s unification warns that Europe will become far more hostile toward Britain in the near future, with much greater consequences. To learn why we believe this and watch for these conditions to become reality, read our free booklet Isaiah’s End-Time Vision, by Trumpet editor in chief Gerald Flurry.