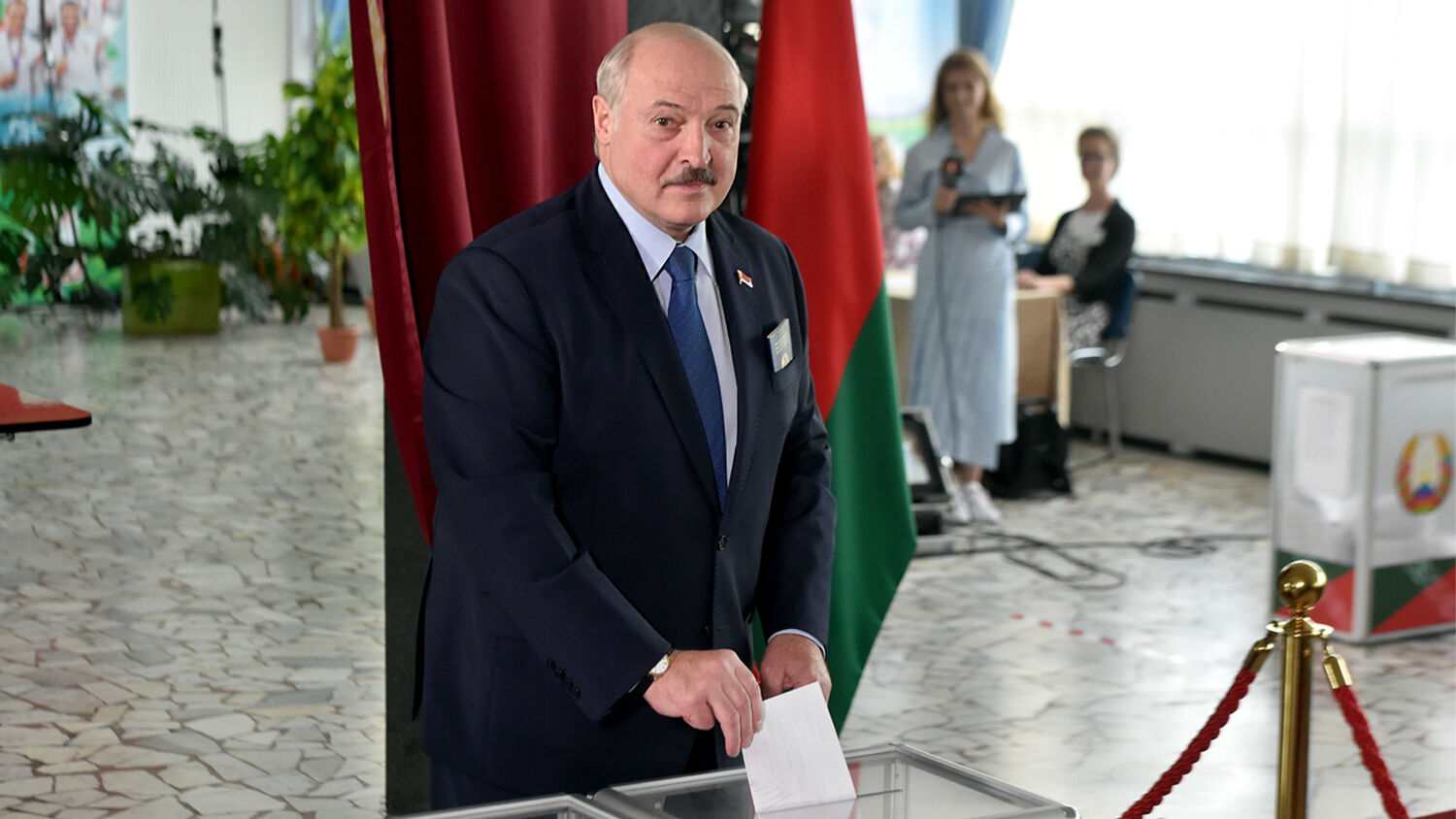 Belarus’ President Alexander Lukashenko casts his ballot at a polling station during the presidential election in Minsk on August 9, 2020.
SERGEI GAPON/POOL/AFP/Getty Images

Elections and protests have left the nation in turmoil, and Russia is ready to take advantage.

Alexander Lukashenko won reelection to serve an unprecedented sixth term as Belarus’s president after elections were held on Sunday, August 9. His victory triggered uproar and unrest as protesters converged on the streets and clashed with riot police. Despite the civil opposition to the results, Russian President Vladimir Putin swiftly moved to congratulate Lukashenko’s win and called for closer ties between the two governments.

United States Secretary of State Mike Pompeo said the election “was not free and fair.” Indeed, many of the protesters doubt the legitimacy of the results, which showed Lukashenko winning 80 percent of the vote, despite independent exit polls giving main opposition challenger Svetlana Tikhanovskaya up to 70 percent of the vote. In the official figures, she won just 10 percent out of an 84 percent turnout.

As a result, tens of thousands of protesters and demonstrators poured into the streets of Minsk and other cities across Belarus. Over 7,000 people have been arrested, with over 200 civilians seriously injured and two reportedly dead. In the wake of the chaos, the government shut down the Internet.

After the election on Sunday, Belarus suffered a connectivity blackout through to Tuesday evening. Governments in Venezuela, Burundi and Zimbabwe have all employed this tactic in the aftermath of elections—widely condemned as unfair or free—to quash protests and civil unrest.

While Lukashenko blamed the blackout on external forces and foreign cyberattacks, NetBlocks director Alp Toker said, “There’s no indication of a DDoS attack. It can’t be ruled out, but there’s no external sign of it that we see.” He went on to remark on the timing of the outage, with disruptions starting after midnight Sunday and getting worse through Monday morning just as the results started to filter in.

“I think everyone understands it is caused by government,” said Belarussian journalist Franak Viačorka, “but operators do not want to recognize it publicly. It’s like nobody knows what’s happening. No one wants to take responsibility.”

The people are, though. The demonstrations and marches are continuing, with August 16 seeing the eighth consecutive day of protests.

It is against this backdrop that Russia has been showing its support for Lukashenko and displaying a willingness for closer ties with Belarus. The two countries are closely linked by language and culture as former members of the Soviet Union. In his message to Lukashenko, Putin said that he hoped the two countries could expand on their present economic and security integration.

An official statement by the Kremlin “reaffirmed its readiness to provide the necessary assistance in resolving the problems that have arisen” in Belarus under the countries’ mutual military pact.

It might seem ill-judged for Putin to voice support for a regime facing such fierce public opposition in the wake of apparently illegitimate election results. But his support isn’t for Lukashenko himself. Analysts say that even if he is toppled by the protests, the Kremlin will look to see a favorable partner installed in Minsk. Ultimately, it is all about ensuring that Belarus remains as close or becomes even closer to Russia than it is right now. History and geography give important context as to why.

Vladimir Putin has called the fall of the Soviet Union “the greatest geopolitical catastrophe of the 20th century.” From early in his presidency, he has sought to restore the old order and return to the former glory of the Soviet Union. Belarus would be an important part of bringing this to pass.

Part of the importance of the Soviet Union was the security that it afforded Russia. Invaders had to travel a great distance into the Russian heartland, which combined with the harsh weather conditions made it difficult to survive the trek. Therefore, the other nations of the Soviet Union created important buffer zones for Russia, offering them important protection.

This was surely part of Putin’s thinking in the annexation of Crimea and the same is true for adjacent Belarus. Together, they create a defensive buffer for Russia, protecting it from any possible invasion. Therefore, “Russia may be interested in annexing the country altogether,” just as with Crimea, according to Maxim Samorukov, a fellow at the Carnegie Moscow Center.

Offensively, such strategic positions would allow Russia to position itself on Poland’s western border, essentially offering a doorway straight into the European heartland. As part of both nato and the European Union, any threats to Poland would certainly be a threat to Europe. Combined with the history of the Soviet Union and the already existing economic and security ties between Russia and Belarus, gaining greater control of Belarus would be a strategically shrewd geopolitical move.

And so, while Europe and the U.S. condemn the Belarussian government’s use of force in quashing protesters, Putin offers support for the regime and urges closer ties. “Putin’s calculus is that as Lukashenko faces a growing challenge from the Belarussian population … he has nowhere to turn other than Moscow,” said Dmitri Trenin, director of Carnegie Moscow Center. “Belarus is too important for Russia to give it up.”

“Lukashenko will be a much weaker figure even if he remains president,” said Russia analyst Daragh McDowell. “Without a support base in society, his regime will become entirely dependent on a heavy, militarized police presence that will isolate Belarus from the rest of Europe and deepen its dependence on Moscow.”

Keep your eye on Belarus and Russia. As Lukashenko battles to gain control, Putin’s courtship of Belarus could see these two nations wedded even more closely as part of a prophetically significant union.

Revelation 9:16 records a prophecy of an army numbering “two hundred thousand thousand,” or 200 million. This force is identified as belonging to “the kings of the east” (Revelation 16:12). A companion prophecy in Ezekiel 38:2 mentions a “prince of Rosh, Meshech and Tubal”—ancient names denoting Russia, Moscow and Tobolsk—as leading the kings of the east.

Trumpet editor in chief Gerald Flurry wrote in the September 2014 Trumpet that he strongly believes “Vladimir Putin is going to lead the 200 million-man army.” In his booklet The Prophesied ‘Prince of Russia,’ he writes:

Rosh was the ancient name of Russia, once called Rus. Many encyclopedias and commentaries (such as the Jamieson, Fausset and Brown Commentary) recognize this. So who is this “prince” of Russia, Moscow and Tobolsk? The use of all three names shows that this is an individual ruler of all the peoples of Russia, from the west to the east. The reference to the cities of Moscow and Tobolsk helps us see how vast Russian territory is in these latter days.

This explains the significance of Putin’s overt courtship of post-election Belarus. Bible prophecy shows that the “prince of Rosh” will conquer more nations of the former Soviet Union, rectifying what Putin believed to be “the greatest geopolitical catastrophe” of the 20th century.

Why is this important? This 200 million-man army will be involved in the bloodiest, most horrific war in the history of man! This is why Jesus Christ Himself admonished us, “Watch ye therefore, and pray always, that ye may be accounted worthy to escape all these things that shall come to pass, and to stand before the Son of man” (Luke 21:36).

We must watch and pray to escape the things that will come to pass as a result of Russia’s interest and involvement in Belarus. A good way to start is to request your free copy of The Prophesied ‘Prince of Russia’ and subscribe to the Trumpet magazine, free of charge. At the Trumpet, we look at world events from a biblical perspective. This perspective is the only way we can be empowered in the face of world events involving these seemingly distant and powerful nations. It shows that God is in control. Armed with His Word, and guided by the sure word of prophecy, you need never be caught unawares.