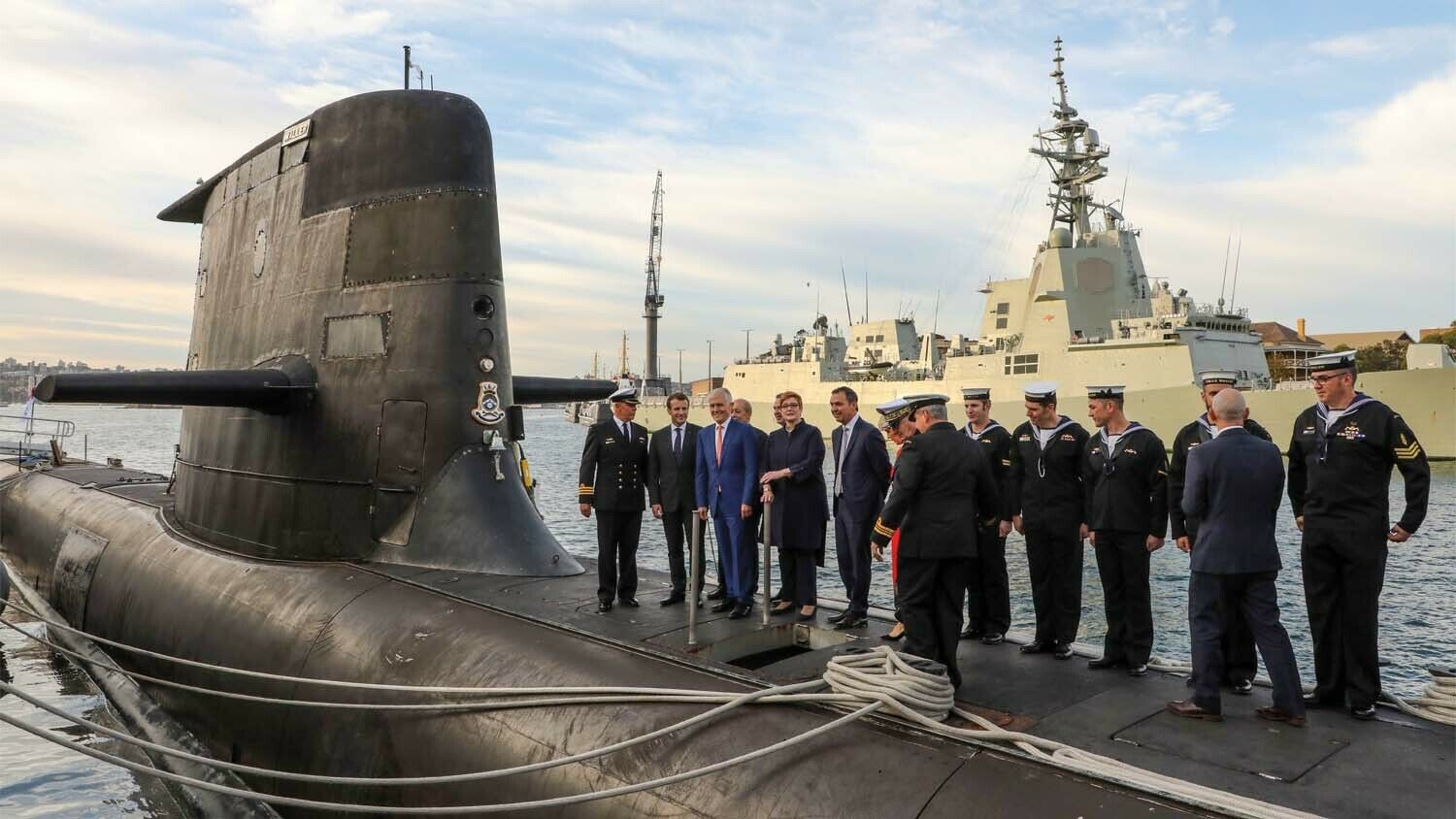 A new alliance is threatening to upend the global order. Australia, the United Kingdom and the United States announced the aukus alliance on September 15, in which the three nations pledged to increase their military coordination, especially in the Pacific. Most importantly, the U.S. announced it would help Australia operate nuclear submarines.

The plan is for Australia to buy at least seven nuclear submarines, which will make it a more capable foe against China, bring profits to American and British defense industries, and dramatically empower the American-led military presence in the region.

Making the Royal Australian Navy the eighth operator of nuclear submarines has the potential to upend the naval balance of power in the South Pacific. Its current fleet of diesel submarines can manage only 11 days of patrolling in the South China Sea before they have to return to their bases in Australia. The nuclear option could make that 77 days.

Plans are also under consideration for Australia to develop longer-range missiles, to station U.S. Navy nuclear submarines in Western Australia, and to station more U.S. Marines in the Northern Territory.

China is furious. The Global Times, which is controlled by the ruling Chinese Communist Party, fumed that the alliance “would make Australia a potential target for a nuclear strike” (September 16).

Almost as big, and perhaps more significant, was the tantrum thrown by France.

‘A Knife Blow No One Saw Coming’

Australia had agreed to spend up to $90 billion buying French-manufactured diesel submarines. America’s offer of nuclear submarines sunk that deal and with it an important source of revenue for France’s naval industry.

Vincent Lamigeon from the Fondation pour le Recherche Stratégique characterized the cancellation as “a knife blow to the heart that no one in France saw coming” and a “Trafalgar shot from which Naval Group will takes years to recover.” Ouest-France said that for one of France’s key naval regions around the Cherbourg Naval Base, it is “a small social and economic earthquake.”

“It was really a stab in the back,” said French Foreign Minister Jean-Yves Le Drian. “We had established a relationship of trust with Australia. This trust has been betrayed. This is not something allies do to each other.”

Much of the European Union also took offense to aukus. Die Welt characterized the alliance as a declaration of war on the EU. Germany’s ambassador to the UK said the deal threatened the “unity of the West.” German Chancellor Angela Merkel’s longtime foreign-policy adviser called the deal an “insult to a nato partner.”

The Vatican also condemned the deal. Secretary of State Cardinal Pietro Parolin said that because it involves nuclear-powered weapons, it will “create even more dangers for peace and even more conflict.”

John Allen Jr., veteran Vatican watcher at Crux, wrote that the deal “seems to have the potential to fundamentally redefine the geopolitical game. Since the close of World War ii, it was always ‘the West,’ meaning North America, Europe and Australia together, against someone else, whether the Soviets during the Cold War or global jihadism post-9/11. Now it seems it may be the Anglo-Saxon powers vs. China, with Europe either relegated to the sidelines or finding a new role for itself. In that realignment, the Vatican is likely to be an advocate of a more assertive and independent Europe” (September 18).

Allen wrote that the Vatican was never really keen on the North Atlantic Treaty Organization and “basic skepticism about Anglo-Saxon culture remains hardwired into the Vatican’s dna,” especially under the current pope.

“The Vatican has been pushing Europe to be less deferential to the U.S. for some time,” Allen noted. “Such a jolt could provide Europe the impetus it needs to come together.”

The Daily Telegraph reported that France is so desperate for a unified military that it is willing to give up its United Nations Security Council seat to the European Union. An EU-controlled seat would be a German-controlled seat, something the Germans have desired for decades. Whatever discussions may have been going on, France did not publicly make that offer. But perhaps the time will come soon when it will follow through in making that sacrifice.

The United States believes it has an unshakable friend in Europe. It does not. Biblical prophecy warns that Britain and America will trust in “lovers,” foreign allies, that will destroy them. God warns in Jeremiah 30:14, for example, “All thy lovers have forgotten thee; they seek thee not ….”

Germany is cozying up to Russia, empowering it with a new gas pipeline, which Moscow has immediately weaponized against much of Europe. France has been pushing for a European replacement for nato for years. Europeans don’t want to just be part of “the West” any longer; they want to be their own power. The Bible prophesies that soon they will be.

France has been the most enthusiastic cheerleader for this split. In 2019, French President Emmanuel Macron warned of the “brain death” of nato. The year before, he said, “We have to protect ourselves with respect to China, Russia and even the United States of America.” French Finance Minister Bruno Le Maire took things even further, saying that the European Union must become a “form of empire, like China, and the U.S.”

In his January 2019 article “France Is Betraying America and Fulfilling Bible Prophecy!” Trumpet editor in chief Gerald Flurry explained how France is descended from the biblical tribe of Reuben. “Your Bible says Reuben’s modern descendants will again betray the latter-day descendants of Joseph—America and Britain!” he wrote. “The Bible prophesies of a European superpower led by Germany. France will meekly submit to and participate in this German-dominated ‘beast’ of Revelation 13. In so doing, France will cruelly betray the allies it fought alongside in two world wars against Germany! Yes, Reuben’s descendants will play a treacherous role in ‘selling’ their brother into captivity and slavery, just as their ancestor did more than 3,700 years ago! We are seeing the beginning of that betrayal today!”

France’s strong reaction to the aukus alliance is another sign of this betrayal.

Other prophecies specifically describe this new European power forming a temporary alliance with China. Isaiah 23 discusses Tyre and Zidon, economic juggernauts of the ancient world that symbolize the economic power soon to arise in Europe. These are described in a trading alliance with Chittim, which, in Bible prophecy, is China.

Revelation 18 describes this same European economic superpower. The prior chapter shows that it is controlled and dominated by a “harlot,” which is a prophetic symbol of a false church.

The new aukus deal provides a premise for a major world religion to fundamentally shift Europe’s role in the world.

This is the briefest overview of the prophecies involved. They require more detailed study to prove them to yourself. But the overview shows us that the whole prophetic panorama described in the Bible could soon be here: Europe, led by the Vatican, turning against America and siding with China. Perhaps the reaction to aukus will help prompt such a shift. But even if not, resentment against the United States is bubbling in Europe. The Vatican is looking to play a role in shifting Europe’s alliance. World events could move very quickly.

The United States and Britain in Prophecy
People of the Western world would be stunned—dumbfounded—if they knew! The governments of the United States, Britain, Canada, Australasia, South Africa would set in motion gigantic crash programs—if they knew! They could know! But they don’t! Why?
From The November-December 2021 Philadelphia Trumpet
View Issue FREE Subscription
Next
Previous