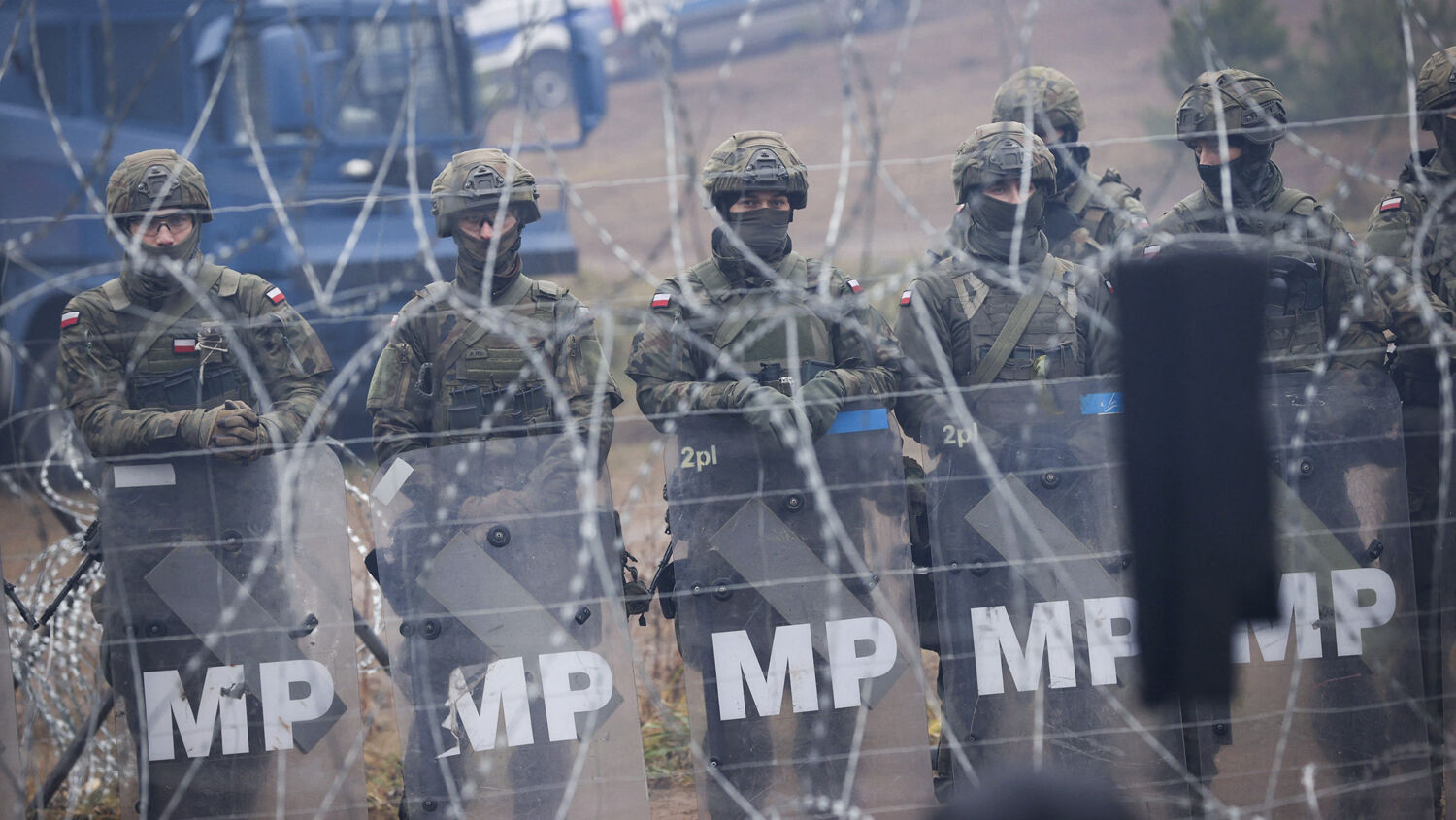 Over the summer, Europe received a massive wake-up call about its vulnerability and need for leadership. Afghanistan exposed that Europe was completely dependent on an unreliable ally for its security. When America abruptly withdrew from Afghanistan, Europe could do nothing. Now, in case it hit snooze, Europe is receiving the wake-up call all over again.

This time, the lesson comes courtesy of Russian President Vladimir Putin. He has pressured Europe in just about every way he can. There are reasonable fears that he could be about to start another war in Europe. The European Union, Germany and France all look powerless.

The most blatant attack comes from a migrant crisis he’s created. Thousands of Middle Eastern migrants are crossing into and overwhelming Poland and Lithuania.

Poland is not a typical stopping point for travelers from the Middle East. But Putin’s puppet Belarus has been flying them in from Iraq and Syria and shoving them across the border.

It has become a deadly game of chicken. Both sides push the migrants toward the other. Neither wishes to give them food or shelter; they make the migrants as unwelcome as possible to try to force them on to the other power.

The latest reports indicate Belarus is arming the migrants with stun grenades to help them attack Polish border guards. And Russia has made clear it has Belarus’s back: Russian nuclear bombers patrol Belarus’s borders with Poland.

Putin is also threatening Europe in the Balkans. Serbs in Bosnia are threatening to split off, claiming they have Russia’s backing. But every time anyone threatens to break up a country in the Balkans it makes a lot of people nervous. If the Bosnian Serbs did break away, they could rejoin Serbia itself, strengthening the pro-Russia forces in the region.

It was only 30 years ago that the Balkans was Europe’s biggest war. The EU has been consolidating its hold over the area. The last thing it wants is more conflict—or worse, a growing “greater Serbia” backed by Russia expanding in the region.

Putin is also creating an energy crisis. Gas prices in Europe have gone up 650 percent in the last year. Energy companies are going bust left, right and center as they can’t keep up with the high prices. Putin’s closed one gas pipeline and cut the flow of another in half. He’s sitting on the sidelines saying, Shame about that gas crisis. You know I have a lot of natural gas. I could help you—if you approve the Nord Stream 2 pipeline.

All of this is not a series of coincidences. Putin is very deliberately menacing Europe.

Why? I honestly don’t know. He could be about to try something big. It could all revolve around the Nord Stream pipeline, putting pressure on Europe to accept Russian gas. Maybe he’s prepping for an invasion of Ukraine, or some other Eastern European country.

His actions certainly look like it. This could be a threat to Europe: I’m about to invade somewhere, and if you interfere, I’ll cut off your gas all the way, wreck your economies, blow up the Balkans, and flood your countries with migrants—so stay out of my way.

I don’t know. But I want to focus on something I do know: how this is affecting Europe.

In the latest Trumpet issue, Trumpet editor in chief Gerald Flurry wrote that America still has power, “but we lack the will to use it! And as a result, Europe is growing anxious over its own leadership vacuum.”

“There is a real recognition in Europe of their need for military unity,” he continued. “The trouble is, they lack the robust leadership needed to bring it about. Analysts say Europe is up for grabs.”

The dust has not settled on the Afghanistan crisis; its effects are still reverberating around the world. And here comes another crisis that affects Europe in the same way.

Thus far, Europe has responded to Russia’s aggression mostly with sanctions against Belarus. Very little is done against Russia. Europe’s response is weak, and everyone knows it. Putin holds just about all the cards.

Without America behind it, what can Europe do right now to stand up to Russia? Europe knows the U.S. doesn’t have its back. Putin knows America won’t stop him. He can do whatever he likes.

It’s the same lesson as Afghanistan. In a world without America, Europe needs to make big changes.

Some of those changes are already here. Just a few weeks ago, Poland seemed on the brink of quitting the EU. The European Court of Justice was fining the country a million euros a day; Poland was promising to ignore them.

Now that’s forgotten. Poland is on the front lines, defending the welfare systems of France and Germany from hoards of new benefit claimants. EU officials are talking about giving Poland extra money so it can build a border wall.

At the same time, Poland knows it can’t stand up to Russia alone. It would prefer the U.S. as a close ally, but if it can’t rely on America; it needs Europe. The row isn’t over—and it will probably resurface once things calm down—but thanks to Putin, it can get along for now.

We’ve been forecasting exactly this dynamic for years. After Russia invaded Crimea in 2014, Mr. Flurry warned of the rise of a new European superpower “directly related to the Crimean crisis”! Why? “The fear you see in Europe because of events in Crimea is going to cause 10 leaders in Europe to unite in a sudden and dramatic way—and in precise accordance with the Bible’s description of that European empire!” he wrote in “The Crimean Crisis Is Reshaping Europe!”

That unification is still not complete, but Putin is giving them a big push forward. For over 70 years, we’ve been forecasting the formation of this revived Holy Roman Empire. The books of Daniel and Revelation give a clear picture of this rapidly rising empire. Revelation 17 tells us it is made up of 10 kings who share power. But Daniel 2 shows that they don’t form a harmonious union. Symbolized by the 10 toes of a great statue, these 10 nations are “part of iron, and part of clay” (Daniel 2:42). This empire will be “partly strong, and partly broken,” the prophecy informs us.

Iron and clay don’t mix, but put them under enough pressure and you can force them together for a time. This is exactly what Putin is doing.

A second major prophecy that Russia’s invasion of Ukraine will bring about is the arrival of a strongman in Europe. A new leader is coming—a kind of Vladimir Putin. This is what Europe needs in order to bind together, to have the strength and unity of purpose needed to confront Russia. …

Europe’s new fear of Russia is going to play a major role in hastening the fulfillment of that prophecy! …

The growing necessity to protect themselves is going to drive European leaders to pare down the number of nations in their union and empower a strongman! …

Putin is helping to create a power that is going to be greater than his own! He doesn’t know that, because he doesn’t understand Bible prophecy. But he is going to know it. And the clash between these two powers will cause more suffering than the world has ever known!

Look at what Putin is capable of. Russia’s economy is half that of Germany’s—less than a 10th of the EU’s. Yet Putin can really throw his weight around in the world because he is a strong leader. Many in Europe have been looking at that example and wondering what they would be capable of if they only unified behind one strongman. Putin is giving them little choice.

The Bible tells us this European empire will be capable of a great deal. Men will look at it and say, “Who is like unto the beast? who is able to make war with him?” (Revelation 13:4). But it also tells us that this empire is a major stepping-stone in God’s plan for end-time events. It will be defeated as it helps pave the way for God’s intervention in world events.