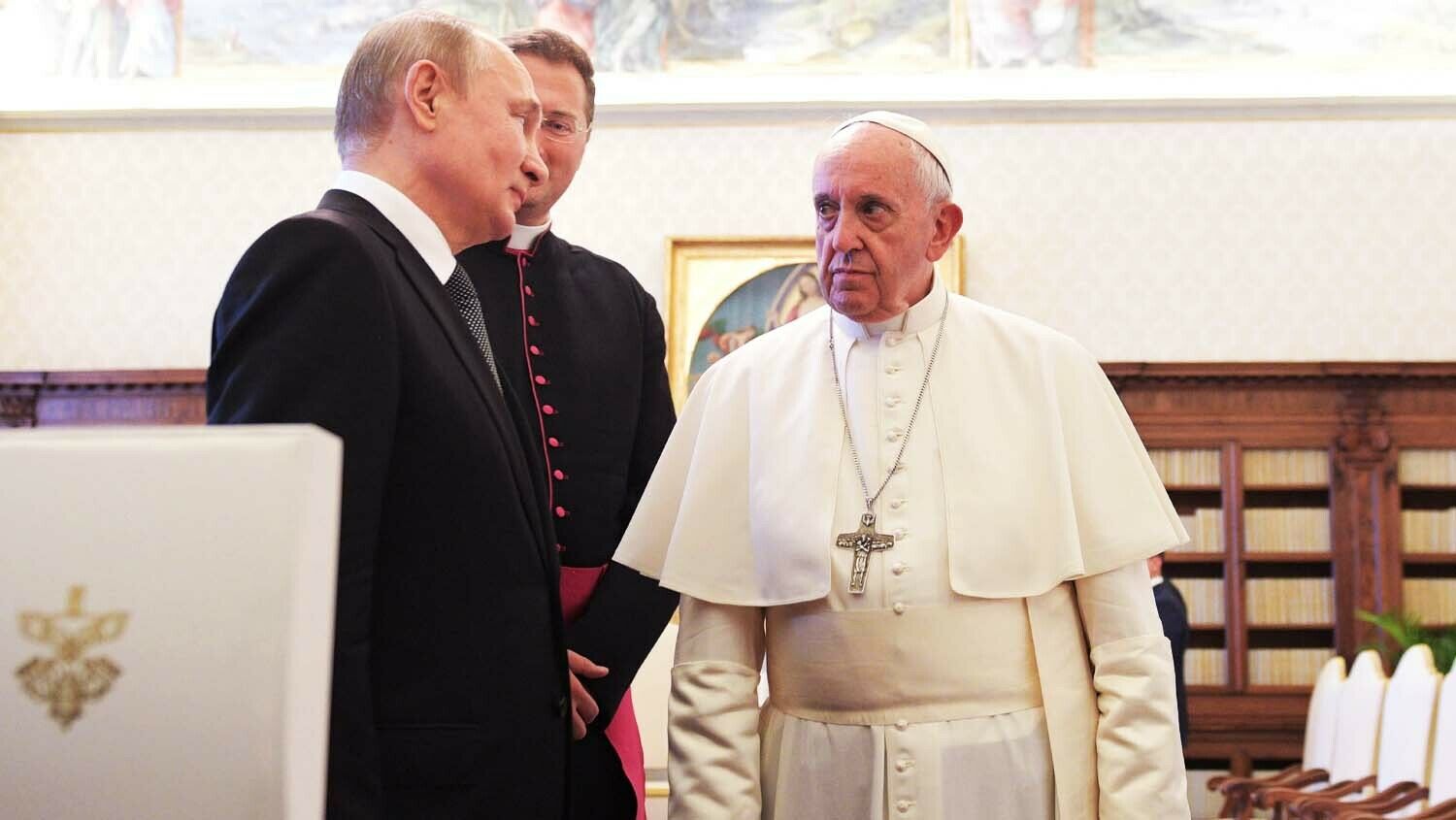 Will a crisis occur over Ukraine?

Russian President Vladimir Putin has been making headlines for days now. He has supported his proxy in Belarus sending Middle Eastern migrants into the European Union. He’s been blackmailing Europe with skyrocketing energy prices. He’s threatening to restart war in Bosnia-Herzegovina. He’s even demanded a new iron curtain.

Putin is on a lot of people’s minds. But what is on Putin’s mind?

On December 17, it was wishing the pope a happy birthday.

Putin sent a telegram to congratulate Pope Francis for reaching 85 years of age. “It is hard to overestimate your personal contribution to the development of relations between the Russian Orthodox and Roman Catholic churches, and to the strengthening of the Russian-Vatican ties,” the telegram read.

Putin then made an interesting proposal of sorts. “I am certain that, with our joint efforts, we will be able to do a lot to protect the rights and interests of the Christians and to ensure the multi-confessional [or interfaith] dialogue.”

The Catholic Church and the Orthodox Church normally don’t get along. Since their split in 1054, they’ve found every excuse imaginable to squabble. This includes everything from how to properly cross oneself to which day to celebrate Christmas to Mary’s official title.

Yet the Russian Orthodox Church is friendlier to the pope than to other Orthodox churches.

Kirill has also accused Patriarch Bartholomew of Constantinople of trying to divide the Greek and Slavic Orthodox worlds. Kirill called Bartholomew’s actions “a crime” worthy of “divine retribution.” Kirill is apparently closer to the pope than he is to his fellow patriarch. Francis and Kirill met in 2016, the first time the leaders of the two religions had met since the 1054 split.

Francis and Kirill are preparing for another meeting. Earlier in the month, Francis said that “a meeting with Patriarch Kirill is not far on the horizon.” He said he would even go to Moscow to visit him “brother to brother.”

Francis has already met with Putin three times. By comparison, he has met United States President Barack Obama twice and Queen Elizabeth ii only once. If Francis goes to Moscow to meet Kirill, he would likely take the time to visit Putin again as well.

Pope Francis has good relations with both Putin and Kirill. But how close is he to Ukraine?

Amid the recent Ukraine crisis, Francis spoke about his vision for peace in Ukraine on December 12. He told a crowd at Vatican City that “weapons are not the path to take.” He claimed to be praying for “dear Ukraine, for all its churches and religious communities and for all of its people, so that tensions there are resolved through a serious international dialogue and not with weapons.” He didn’t mention Russia by name.

Such a solution would delight Moscow as it would not return Ukraine to the pre-2014 status-quo (before Russia annexed Crimea and sponsored rebels in eastern Ukraine). Instead, Kiev would make concessions to the rebels and cement Putin’s influence in the region.

Francis is known for saying (or not saying) things that suggest a pro-Kremlin narrative. For example, in 2015, he called the war in Ukraine “fratricidal violence.” This is similar to Moscow’s language that the conflict is a civil war between Ukrainians—rather than a Russian proxy war. In 2016, the Trumpet even asked, “Why Is the Pope Pro-Putin?”

No wonder Putin said it was “hard to overestimate” Francis’s contributions to reaching out to Russia. But why is this the case? Why is the pope pro-Putin? And why is Putin pro-pope?

Not all Ukrainians accepted the Orthodox Church of Ukraine’s decision to split with Moscow. As of 2020, about 14 percent of Ukrainians stuck to the Russian Orthodox Church. Ukraine also has a sizable Catholic population, mostly in the west of the country.

Could Moscow and Vatican City be planning to divide Ukraine into spheres of influence?

That’s questionable. Putin getting cozy with the pope goes against historical precedent. It suggests that something bigger is in play. And Putin’s suggestion that he and Francis work together “to protect the rights and interests of the Christians” sounds like an offer: You can have your Catholics in western Ukraine if you let me have my Orthodox Christians in the east.

This might sound like melodrama. A birthday telegram is not the most indisputable evidence. But the Vatican has in recent years used its diplomatic clout to change the world order.

When Yugoslavia was collapsing in the 1990s, most of the world was against the independence of Croatia and Slovenia, including the United States and the European Union. But two powers offered diplomatic recognition: Germany and the Vatican. Germany was Croatia’s old ally in World War ii. Catholicism is the majority religion in both Croatia and Slovenia. Because of the Vatican’s blessing, the rest of Yugoslavia collapsed into bloody civil war.

In 2014, Pope Francis mediated a deal in which the U.S. agreed to restore diplomatic ties with Cuba. Up until then, Cuba’s economy was struggling. Its main sponsors, Russia and Venezuela, had bad economies of their own and couldn’t keep the Castro regime afloat much longer. Communism in Cuba could have fallen. But because of the pope’s mediated deal, Communists continue to rule in Havana to this day.

We’ll have to wait and see if a similar Vatican-sponsored deal could “fix” the Ukraine crisis to Putin’s benefit. But one thing is certain: The Roman Catholic Church is much more interested in world politics than the average religion.

“The Roman Catholic Church is the most recognizable and illustrious religion on Earth,” writes theTrumpet.com managing editor Brad Macdonald in his book, The Holy Roman Empire in Prophecy. “Worldwide, it has more than 1.2 billion followers, roughly 400,000 priests and some 221,000 parishes. Catholicism has a presence on every continent and in every nation. … Yet despite its global ubiquity, colossal fame, material splendor and long history, the Catholic Church is an enigma. Even to lifelong Catholics.”

Vatican City is the smallest country on Earth. Its birthrate is zero. Its army is composed of a handful of Swiss Guards armed with spears. Yet when the pope speaks, nations listen. A word from the Vatican can keep regimes in power or topple them. The Apostolic Palace—the papal residence—may to the casual tourist seem like just another wing of the Vatican Museums. But it is also one of the most powerful pieces of real estate in the world.

As Macdonald wrote, “The Roman Catholic Church is the most defining and influential institution in Europe’s history—yet somehow it remains a total mystery!” We’re getting a small glimpse into some of that mystery with the pope’s relations with Vladimir Putin. If you would like to learn more, please request a free copy of The Holy Roman Empire in Prophecy.