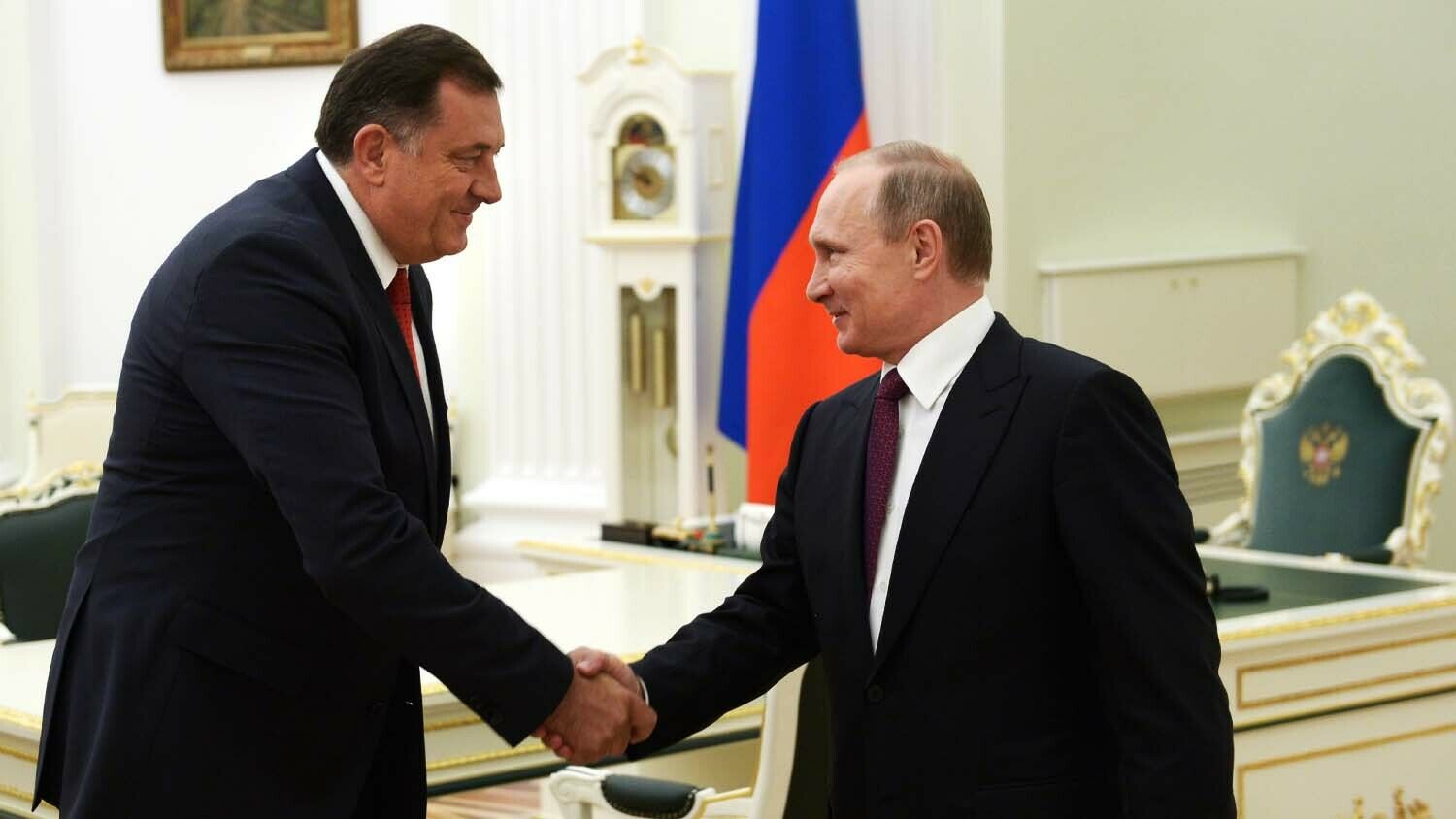 Can Putin—once again—redraw the borders of Europe to his liking?

The most volatile region of the former Yugoslavia threatens to send the region back into war. Republika Srpska, the Serb-dominated region of Bosnia and Herzegovina, is threatening secession. The region’s leader, Milorad Dodik, announced last month the region would withdraw from Bosnian federal institutions.

This is, as Bosnian political scientist Jasmin Mujanović tweeted, “secession in all but name.”

This is secession in all but name. And he’s testing the waters. If Dodik and his masters in Moscow and Belgrade feel the response here is weak - which I fear it is likely to be - they’re going to escalate even further.

This move would violate the 1995 Dayton Accords, which ended the Bosnian War.

What followed was one of the bloodiest conflicts in Europe since the Second World War.

Atrocities were attributed to all sides. Sarajevo endured the most destructive siege of any European city since World War ii’s siege of Leningrad. A war crimes tribunal in The Hague branded Bosnian Serbs’ massacre of Bosniak Muslims as genocide. The 1995 Dayton Agreement brought a compromise: Serbs would have their own autonomous region within Bosnia; the federal government in Sarajevo would have limited responsibilities; Republika Srpska would maintain its own capital city, Banja Luka.

Many worry that Dodik’s latest move will throw Bosnia back into civil war. Recent headlines from various news media warn:

Dodik stated in an interview with Der Spiegel that he has no plans on starting an actual war. “I don’t believe in the possibility of a new political conflict,” he said. “We won’t be the ones to start it. We are fighting politically for our goals.” Yet it’s hard to see how a secession from Bosnia would accomplish anything other than a war.

In some respects, it’s easy to sympathize with the Serbs. Dodik has made comparisons between Republika Srpska and Slovenia, the first republic to secede from Yugoslavia. If everybody else could break apart from Yugoslavia, why can’t Serbs break apart from Bosnia? And many Serbs see themselves as being unfairly victimized as the war’s “bad guys” in Western media. Many Serbs committed atrocities during the war. Many Bosniaks and Croats were involved in odious acts during the war as well. For example, Iran and the Taliban—two radical Islamist regimes—were implicated in organizing training camps in Bosnia for Muslim Bosniak forces. Yet many Serbs feel the transgressions of the other ethnic groups are swept under the rug while they become the scapegoats of everything that went wrong in Bosnia.

But contrary to Dodik’s rhetoric, Banja Luka seems to be gearing up for war.

Under the Dayton Agreement, Republika Srpska isn’t allowed to have its own military. But it is allowed to have its own police force—and it has developed quite a hefty police force. On October 22, Republika Srpska security forces participated in an “anti-terrorist” drill close to where Bosnian Serbs were shelling Sarajevo in the city’s siege. The security forces included armored vehicles, helicopters and camouflaged specialized police with assault rifles.

In one instance, Republika Srpska’s Ministry of Internal Affairs purchased 2,500 high-powered rifles, about 10 times as many as Sarajevo’s national police purchased.

Yet to truly understand what’s going on in Bosnia, we have to look away from the local politics. There are bigger powers involved in this. Principally, Russia.

Most peoples in Eastern Europe generally don’t have favorable opinions about Russians. Poles, Ukrainians, Estonians and others haven’t forgotten what Moscow’s bear paw did to them when they were under communism. Serbs are one of the few people in the region who have opposite opinions. Many Serbs adore Russia. A 2020 poll from the Belgrade Center for Security Policy showed that 40 percent of Serbians see Russia as Serbia’s best friend. Seventy-two percent of Serbs saw Russia’s influence in Serbia as being positive. Meanwhile, 51 percent didn’t support Serbia joining the European Union.

Both are Orthodox Slavs. Russia supported the Serbs during World War i, World War ii and during the 1990s Balkan Wars. Yugoslavia’s Communist dictator, Josip Broz Tito, is revered among many Serbs as Joseph Stalin is among many Russians. Predrag Ceranić, faculty dean at the University of Banja Luka, wrote a book in which he called Serbs “little Russians.”

This makes Republika Srpska a perfect ally for Moscow, right in the heart of Europe. Russian President Vladimir Putin knows this. And he’s become a close international partner to Dodik.

Republika Srpska’s security forces have intimate relations with Russia. The republic’s forces are trained by Russian police and counterterrorism trainers. Meanwhile, former Republika Srpska officers often get reciprocal jobs in Russia. For example, former Bosnian Serb Capt. Tihomir Ivanović teaches at a Moscow state military academy. There is even talk of starting a “Russian humanitarian center” in Republika Srpska patterned after a similar center in the Serbian city of Niš; the Niš site is suspected as being a Russian intelligence and military station. As Foreign Policy headlined, “Putin Is Building a Bosnian Paramilitary Force.”

Then there is the incident of the Orthodox icon. Last year, Russian Foreign Minister Sergei Lavrov visited Dodik in Bosnia. Dodik gave Lavrov an Eastern Orthodox icon as a gift. It turned out that the icon came from rebel-occupied eastern Ukraine. The question remains as to how it got into Dodik’s hands. It suggests that Dodik has some kind of strong relationship or influence with the Russian-backed rebels. Dodik has previously said that Bosnia should recognize Russian sovereignty over Crimea.

Regarding the latest crisis, United Kingdom Foreign Office official James Cleverly told the UK House of Commons that “we do see the hand of Russia at play here.” Dr. Zijad Bećirović, director of the International Institute for Middle East and Balkan Studies, said in January that “Republika Srpska is being made into a kind of Balkan South Ossetia.” South Ossetia is a breakaway region of the ex-Soviet republic of Georgia sponsored by Russia. Russia invaded Georgia in 2008 to support South Ossetia’s independence.

Putin has already redrawn the borders of Europe to his liking. In 2014, he annexed Ukraine’s Crimean Peninsula and sponsored rebel groups in eastern Ukraine. Could Putin do something similar in Bosnia? And if he did, how would Europe respond?

Europe’s main goal for the region is to integrate the former Yugoslavia into both the European Union and the North Atlantic Treaty Organization. Yugoslavia historically was dominated by the Serbs, friends of the Russians. In the 1990s, when Moscow was still licking its wounds from losing the Soviet Union, Yugoslavia was breaking up. Chancellor Helmut Kohl’s Germany saw an opportunity to weaken Russia’s biggest ally in Europe and recognized the breakaway regions of Slovenia and Croatia when the rest of the world didn’t. America and the EU followed suit soon after. Because of German involvement in the outbreak of the war, the rest of Yugoslavia collapsed. Slovenia and Croatia are now EU member states. Both those countries, as well as Montenegro and North Macedonia, are also nato member states. As Trumpet editor in chief Gerald Flurry wrote in his booklet Germany’s Conquest of the Balkans, “Europe has effectively conquered Yugoslavia!”

But Europe isn’t done picking up the pieces of Yugoslavia. Both Serbia and Montenegro are candidate countries for the EU. Bosnia-Herzegovina is listed as a potential candidate. Membership in nato is mainly advocated by Croats and Muslim Bosniaks. The Serbs—backed by their Russian friends—stand in the way of that.

The new high representative of Bosnia and Herzegovina—Christian Schmidt—doesn’t want to let that stand in his way. The high representative is an international appointee meant to enforce the implementation of the Dayton Accords. Schmidt, a former member of German Chancellor Angela Merkel’s cabinet, wants to make Bosnia in the EU a reality.

Putin might be willing to start a war in the Balkans to stop an EU-nato expansion in the region.

The Balkans would be affected. Many countries in Eastern Europe have been trying to integrate themselves into the EU and nato out of fear of Russia. If Russia sponsored a war in Bosnia, it could accelerate this trend.

Specifically, this could send Eastern Europe to look to Germany—the European country Russia respects the most.

“President Putin has military might and the will to use it,” writes Mr. Flurry in his booklet The Prophesied ‘Prince of Russia’. “America has the power but lacks the will to use it. … The Ukraine crisis continues, and America is sleeping through it. But Europe is deeply alarmed! The changes this crisis provokes in Germany and Europe will shake the nations!”

Ukraine is on the eastern fringes of Europe. Bosnia is right in Europe’s heart, just a boat ride away from Italy. A Russia-sponsored crisis in Bosnia could scare Europe into uniting even more so than the Ukrainian crisis.

Either way, Eastern Europe is headed for turbulent times.

To learn more about German and Russian designs for Eastern Europe, please request free copies of Mr. Flurry’s booklets Germany’s Conquest of the Balkans and The Prophesied ‘Prince of Russia.’