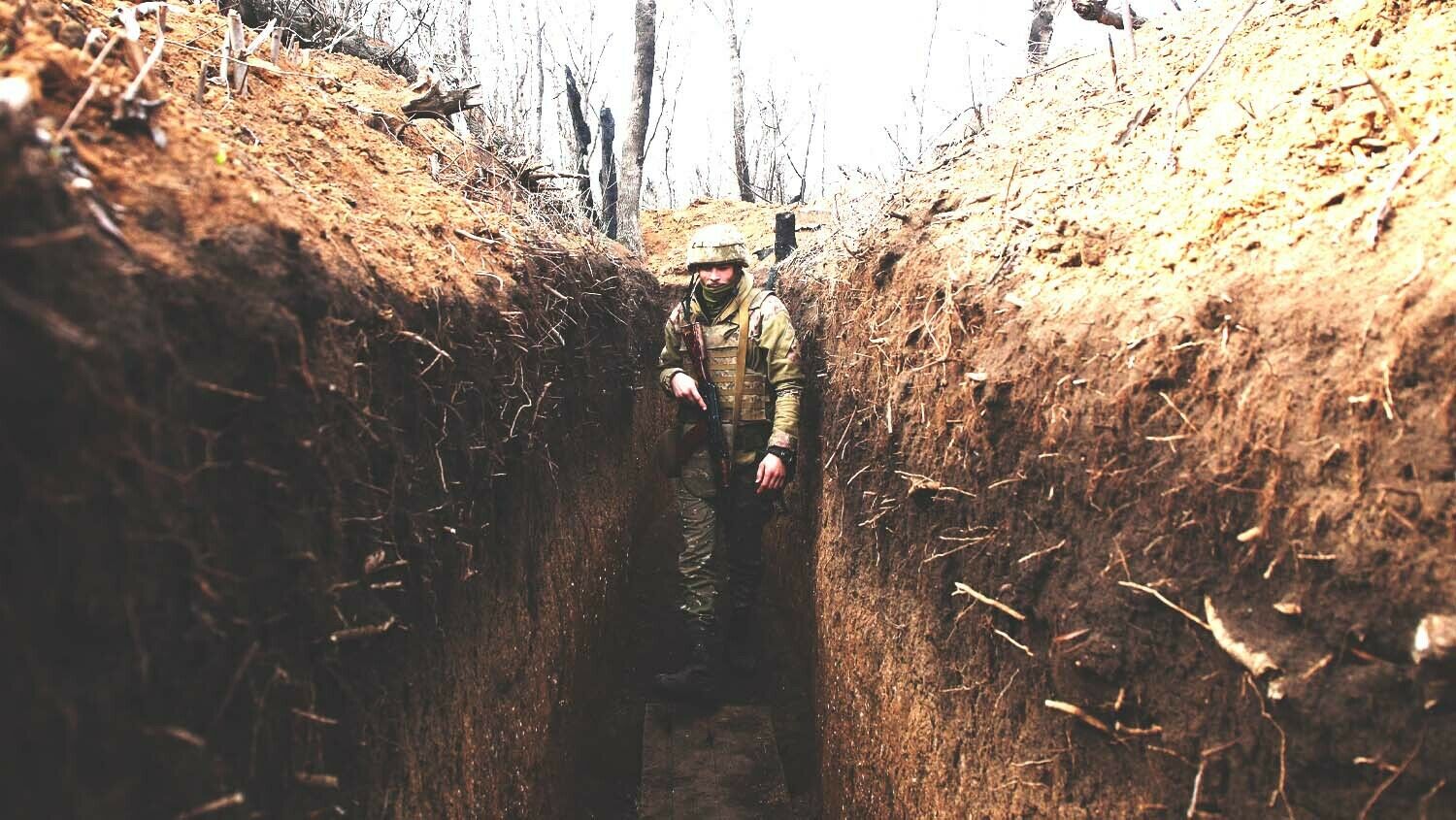 A Ukrainian serviceman walks in a trench on the frontline with Russia-backed separatists near the town of Krasnogorivka, Donetsk region, on April 23.
ANATOLII STEPANOV/AFP/Getty Images

Even if the invasion doesn’t happen, Putin’s mastery of mind games is putting Europe on edge.

Intelligence reports indicate Russia is poised to invade Ukraine by the end of January, Ukrainian Defense Minister Oleksii Reznikov warned on December 3. “Our intelligence analyzes all scenarios, including the worst,” Reznikov told the Ukrainian parliament. “It notes that the likelihood of a large-scale escalation from Russia exists. The most likely time to reach readiness for an escalation will be the end of January.”

At least 94,000 Russian troops are stationed at the Ukrainian border. Medical units and fuel supply lines are being set up. All evidence points to Russia preparing for a drawn-out conflict that could last for up to a month.

“The Russian military is seriously preparing and planning such an invasion,” Gustav Gressel of the European Council on Foreign Relations told Deutsche Welle. Last week, the head of Ukraine’s military intelligence told the Military Times pretty much the same thing. The overall belief is that Russia will launch an invasion within the first two months of 2022.

As the world prepares for what seems to be an imminent invasion, it is important to consider Russian President Vladimir Putin’s strategy.

Since Russia invaded Ukraine and annexed Crimea in 2014, the threat of Moscow coming back for more has loomed large. In the eight years since then, despite several ceasefire agreements, minor skirmishes between Ukrainian forces and Russia-backed insurgents have resulted in over 13,000 deaths. Headlines warning of an impending invasion of Ukraine have never been too far away.

While no invasion has come, Putin certainly hasn’t shied away from making it seem like an invasion is imminent.

In recent years, he has made several threats because of Ukraine’s cozying up to the West. He has made strong statements, saying a free Ukraine does not exist. He has repeatedly mobilized and disbanded forces against Ukraine. Earlier this year, Russia placed Ukraine on high alert when it assembled a massive military force near the border. And just last week, reports surfaced about a plot to overthrow the Ukrainian government on either December 1 or 2. Ukrainian Prime Minister Denys Shmygal believed that Russia was “absolutely” behind the coup. And yet by December 3, no coup was attempted.

Have these simply been false starts? Is Russia all bark and no bite? The 2014 annexation of Crimea is the most recent reason why the answer to that question is a resounding no. The West is certainly taking him seriously. The North Atlantic Treaty Organization is threatening “crippling sectoral sanctions” if Russia invades Ukraine again. Putin, for his part, has warned that any nato military deployment in Ukraine would trigger a strong Russian response. But nobody really knows what that means. And that’s just how Putin likes it.

“Putin loves keeping the West and the United States in a state of, to quote from Mel Brooks, ‘high anxiety,’” former U.S. Secretary of Defense Robert Gates told the Washington Post. “And he loves us not knowing what he’s going to do next. … Whether or not they will move into eastern Ukraine, I would be surprised because I think that would have significant consequences for Russia, particularly on the economic side. … I think the worry about Ukraine is justified. The question is whether [Putin] actually pulls the trigger.”

Foreign Affairs columnist David Ignatius believes that this is all part of Putin’s “mind games with the West” where he “dials confrontation up and down.” Ignatius wrote that Putin plays these mind games by “sending troops to the front and then blaming America for provoking him; his agents float rumors of coup plots in Kiev. He invites concessions from Ukrainian President Volodymyr Zelensky and then, when Zelensky enlists Israeli and French leaders to argue his case, spurns him as weak. A former [Central Intelligence Agency] officer who knows Ukraine well explains that Putin is ‘softening the target, increasing fatigue, distracting the government.’”

Of course, Putin has his agenda with Ukraine. He doesn’t want this strategically important country to be integrated into Europe. That is a major motivator for his campaign of disinformation, military mobilization and blackmail against Ukraine. But he is also happy to toy with the West at the same time. And by keeping his cards close to his chest, by staying in the shadows, he is able to create uncertainty, panic and “high anxiety”—particularly in Europe.

Nobody knows for sure what he’s going to do next, whether he is going to deescalate the situation at the Ukraine border or actually invade. But some Europeans are already at the end of their tether.

“Seven years we have lost by endlessly debating whether we should [militarily equip Ukraine] or not,” said Gustav Gressel. “I really have to put huge blame particularly on the Europeans for being such … cowards in that discussion. But now of course, the situation is as it is. And what do we do now?” Gressel favors placing strong sanctions on Russia, canceling the Nord Stream 2 pipeline, and deploying large forces to neighboring Poland, Romania and Slovakia. Will other Europeans take up his call?

For now, perhaps not. nato is still in the picture. The United States, for its part, is sending serious threats to Russia. But what if America pulls an Afghanistan in Ukraine? Europe, in particular, was left exposed by that shameful evacuation.

If the American-led nato is no longer reliable, such a high-profile loss as Ukraine could “frighten Europe” into taking matters into its own hands.

In 2004, Trumpet editor in chief Gerald Flurry explained in “Russia Frightens Europe—and Fulfills Bible Prophecy” that Russian aggression “strikes intense fear in Europe.” In 2014, following Russia’s annexation of Crimea, he wrote, “The fear you see in Europe because of events in Crimea is going to cause 10 leaders in Europe to unite in a sudden and dramatic way.”

This bold assertion was based on Bible prophecy. One specific prophecy in Daniel 11:40-44 warns that, in the near future, “tidings out of the east and out of the north [will] trouble” a power called “the king of the north.”

He explained that this king of the north will be a powerful, German-led Europe comprising “10 kings,” or strongman-style rulers, prophesied to unite their nations very soon (Daniel 2:41; Revelation 17:12). The “tidings out of the east” concern a massive Asian alliance led by Russia. The original word for “trouble” used in Daniel 11:44 is defined by Gesenius’ Hebrew-Chaldee Lexicon as “terrify” and “to strike with terror.” Other translations say it means to frighten, alarm or cause anxiety.

The prophesied terror doesn’t suddenly manifest just on the day these prophecies are fully fulfilled. It is already building. And it will continue building until it causes Europe to unite “in a sudden and dramatic way” and ultimately engage in nuclear battle with the Asian superpower alliance.

“War is coming between Russia and China and a German-led Europe—war on a scale that is hard to imagine! Millions and even billions of people will be killed,” Mr. Flurry writes in his free booklet The Prophesied ‘Prince of Russia.’ “Nuclear bombs and other weapons of mass destruction are going to impact every nation on Earth!

“But, the Bible also prophesies that at the end of all of these wars, the world is going to see the greatest event ever in the universe: the Second Coming of the Messiah, Jesus Christ! As Christ Himself said, if He didn’t return, there would literally be no flesh saved alive (Matthew 24:22; Moffatt). But before humanity annihilates itself, He will return and stop all this madness!”

Keep a close eye on Ukraine over the next few months. And keep an even closer eye on Europe and how Russia’s increasing aggression and Putin’s mind games will frighten it into fulfilling Bible prophecy in a powerful way.

Request your free copy of Russia and China in Prophecy for more information.