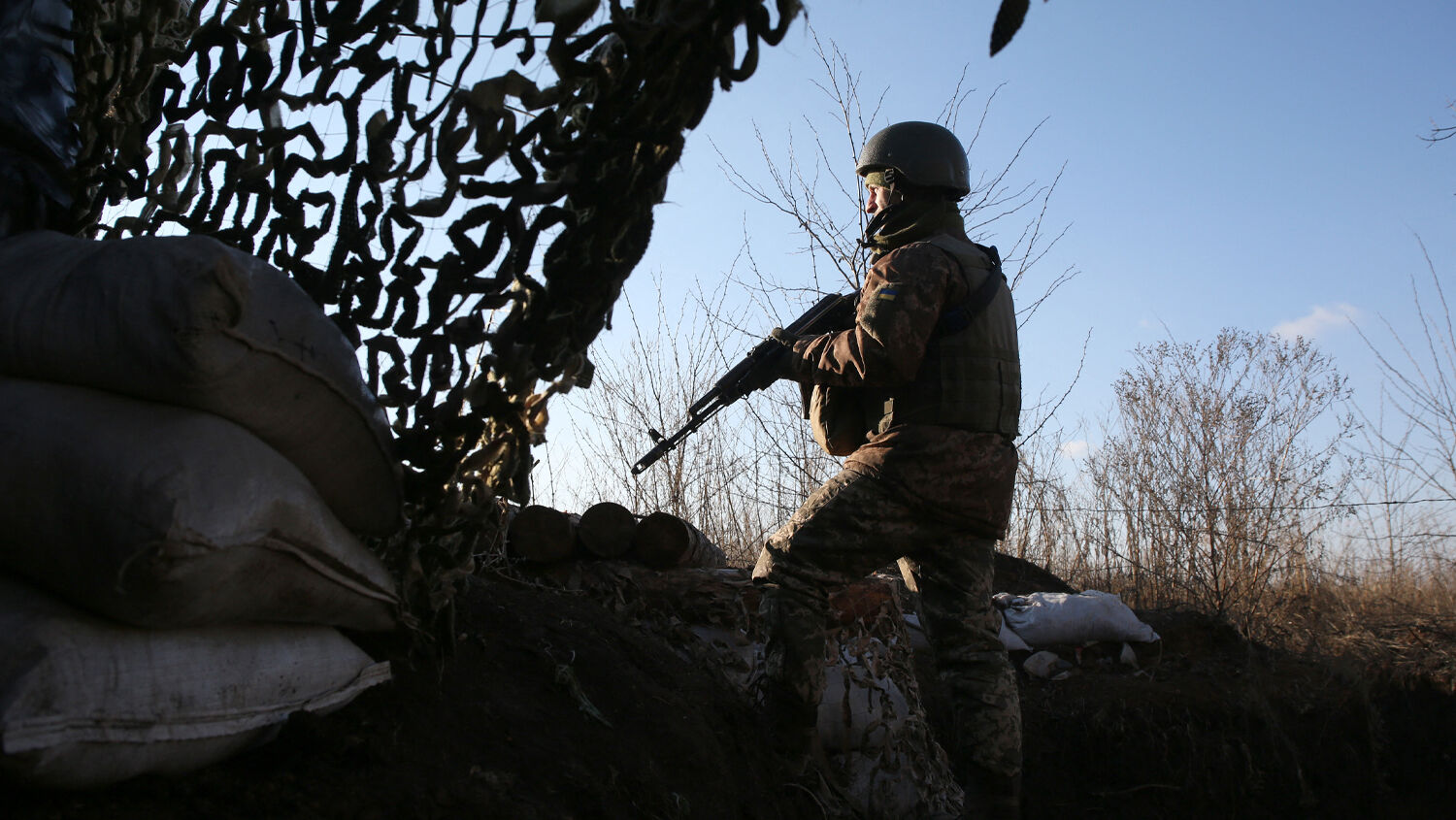 A Ukrainian serviceman keeps watch at a position on the frontline with Russia-backed separatists not far from Gorlivka, Donetsk region, on November 25.
ANATOLII STEPANOV/AFP via Getty Images

For months, Russia has been preparing for … something. It’s not just 175,000 troops on the borders of Ukraine; it’s the threats to upend the peace settlement in the Balkans, deliberately shooting Europe’s gas prices to record levels in the middle of winter, and creating a migrant crisis on Europe’s eastern border.

These aren’t chance events. They took months, if not years, to prepare and coordinate, and they’re all hitting at the same time.

Media speculation has focused on an invasion of Ukraine as Russia’s likely aim. It may form a part of Russian President Vladimir Putin’s ambitions. But if you’re planning to invade a country, you usually just do it, often with as little warning as possible. Russia has stood on the brink of invasion for the last two or three months. Putin’s making a big show of threatening Ukraine. He’s playing a bigger game.

Last Friday, we may have gotten a glimpse into that game. Russia published an astonishing list of demands. If granted, they would be the biggest change in the world order since the end of the Cold War.

Russia demanded a new treaty with the United States and a separate multilateral agreement with the North Atlantic Treaty Organization that would guarantee the following:

If these demands are not met, Russia has promised a “military response” similar in magnitude to the Cuban Missile Crisis.

These demands would not resurrect the Iron Curtain and Warsaw Pact, but they would be a significant step in that direction. If agreed, the U.S. and nato would cross a line they’ve refused to cross: giving Russia a say in the foreign relations of other countries. Ukraine and others would become a kind of second-class state, unable to move away from Russia without Russian permission. The U.S. would publicly declare that Russia is the overlord of Eastern Europe and that the U.S. operates there only with Russia’s permission.

Many expected the U.S. to dismiss such demands out of hand—and there’s still time for Washington to do so. But an anonymous senior administration official said that while “there are some things in those documents that the Russians know are unacceptable,” others “merit some discussion.” So this document may become a starting point for some kind of grand bargain over Eastern Europe.

But there’s one more “coincidental” event that makes it easy to take Russia seriously. All this pressure began shortly after Russia and Germany completed their Nord Stream 2 pipeline. This project is about much more than oil and gas. It has allowed Russia to blackmail Central and Eastern European countries by cutting off their gas while continuing to sell gas to more lucrative West European clients.

Why would Russia begin this push right after the pipeline is finished? Is there more to this arrangement between Russia and Germany?

Ukraine is already complaining that Germany is blocking it from joining nato and also blocking other nato members from selling Ukraine weapons.

If such a deal is in place, it would have to cover Russia’s actions in Eastern Europe. Does the completion of Nord Stream 2 mean we’re reaching a new stage in this partnership?

In his 2018 article “Germany and Russia’s Secret War Against America,” Mr. Flurry noted that Germany seems intent on destroying nato. “Nord Stream 2 binds Russia and Germany together in a way that undermines nato,” he wrote. “In fact, though Russia and Germany will not say so, this pipeline project is clearly intended to wreck nato.”

“Many elite Germans feel their nation has now gotten all it can from the U.S. and they are ready to move on,” wrote Mr. Flurry. “Some powerful Germans today are thinking more and more about the Holy Roman Empire, and they want modern Germany to assume more power of its own in the spirit of that empire. They want to establish Europe as a mighty, German-led superpower.”

Russia’s latest demands would annihilate nato. It would make it impossible for Poland, the Baltic states and others that feel themselves at risk to depend on the United States. Unable to stand up to Russia alone, they’d have to replace America, as the foundation for their defense, with Europe. And that really means Germany.

The effect of Russia’s demands, then, would neuter U.S. influence in Europe and split the Continent between Russia and Germany. This is exactly the kind of deal we’ve been warning about Russia and Germany making for years.

This story is still unfolding, and there are still a lot of unknowns. Perhaps the U.S. will refuse to budge an inch. Perhaps Vladimir Putin, having failed to get what he wants through intimidation, will invade Ukraine.

But as it unfolds, watch the Russo-German relationship. As Mr. Flurry powerfully described in his latest Key of David program, that relationship exposes a lot about modern-day Germany. It shows that powerful elements are working to take Germany in a radically new direction—to break away from its alliance with the United States and instead to dominate Europe in a way that Germany has in the past. Germany knows that Russia has the potential to be a powerful enemy. But it also knows that to accomplish these immediate goals, Russia could be its greatest ally.

Russia’s demands feel strange and almost laughable—like they come from another world, a world where great powers clash and nations worry about being invaded.

In America and Britain, it’s easy to convince yourself you don’t live in this kind of world. Russia’s demands are a wake-up call that you do.

“History shows that Germany and Russia are not actually partners,” wrote Mr. Flurry. “When they enter into peace deals and economic partnerships, it is a signal that either or both are preparing for some kind of imperialistic exploit. This makes the Nord Stream 2 deal extremely concerning.”

“Jeremiah 1:13 records God showing the prophet a vision of ‘a seething pot; and the face thereof is toward the north,’” he warned. “This symbolic language is describing modern Germany. Beneath the surface, that nation is full of simmering dissatisfaction with the current world order. Germans are angry at the U.S., and especially furious with President [Donald] Trump. The imperialistic ambition that prompted Germany to start both world wars is alive and well. It is ‘seething’!”

Signs of a Russo-German deal are signs of this seething pot. It’s a sign of how hard both countries are working to overthrow the U.S. world order. To learn more about this prophecy and where it is leading, watch this week’s Key of David program, “Germany Going Underground.”