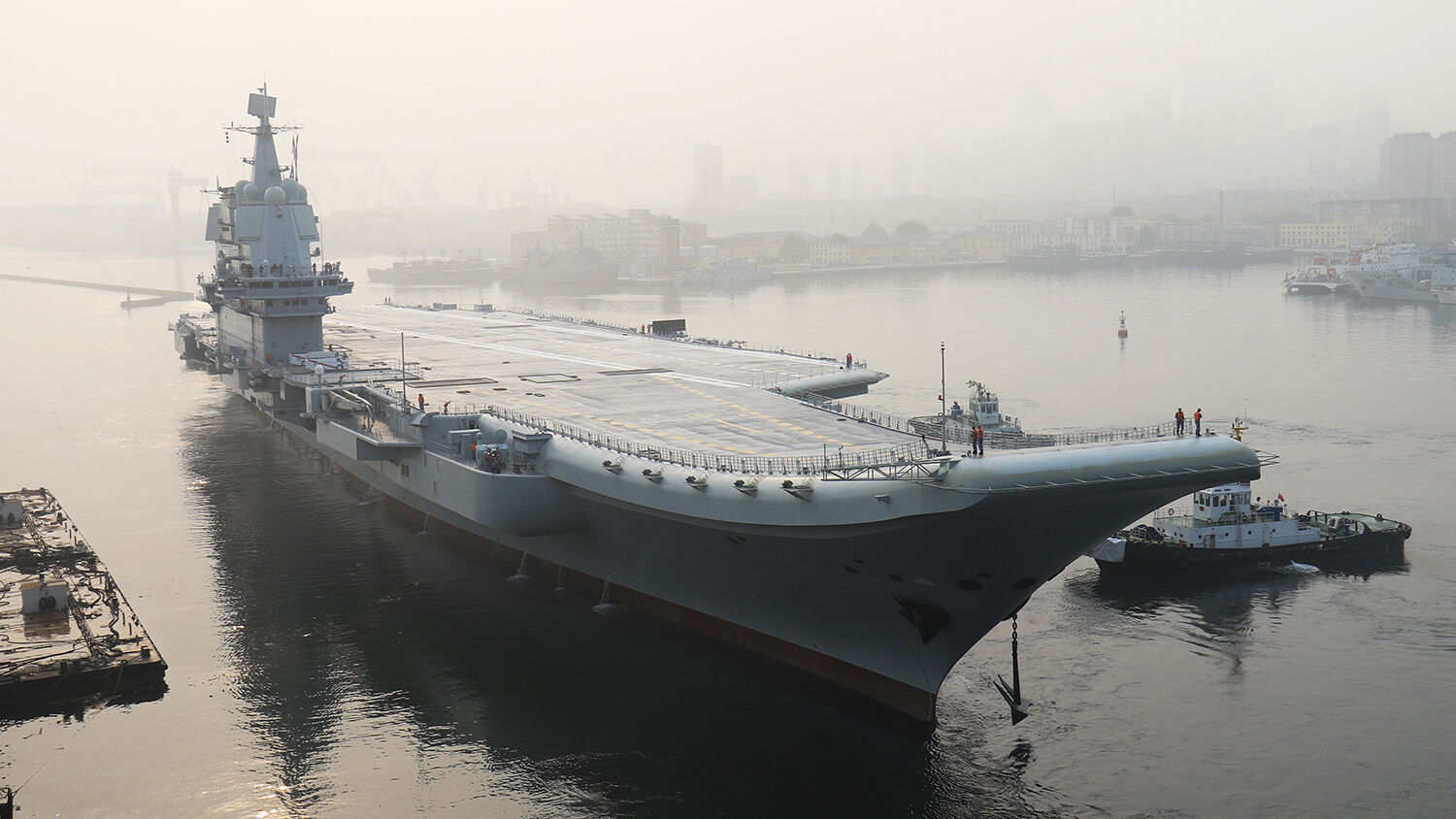 China’s first domestically manufactured aircraft carrier, Type 001A, leaves port in the northeast city of Dalian on May 13, 2018.
-/AFP via Getty Images

The People’s Liberation Army has long been viewed as a paper tiger; those days are over.

China’s first nuclear-powered submarine, launched in 1974, became an object of worldwide derision. The submarines were almost comically loud—too noisy to evade most tracking systems. They were unable to fire missiles underwater. And they exposed their crewmen to dangerous levels of radiation. “They were a killer,” one defense analyst quipped, “but only to the crew.”

The submarine was basically a joke. And at the time, much of the rest of China’s military was similarly unimpressive.

Throughout the 1970s, ’80s and ’90s, China spent more and more on military matters. But its advancements were sluggish and lumbering. Its weapons systems continued to lag considerably behind those of the world’s main expeditionary powers in terms of both capability and reliability.

Even well into the 2000s, China’s military was often viewed as a paper tiger—or perhaps a paper dragon. It appeared menacing, due to vast numbers of infantrymen. But its actual power was comparatively thin.

But China’s leaders were undeterred. They continued to prioritize research and development, design and manufacturing. They kept stealing technology from other nations, and then reverse-engineering and mass-producing cloned weapons. They kept training and exercising with the militaries of more advanced nations, such as Russia. They kept investing more and more tax revenue into their colossal military apparatus, increasing the defense budget by double digits year after year. And today, the People’s Liberation Army is no longer a joke.

“China’s Military Power May Surpass the U.S.’s Faster Than You Think,” Business Insider headlined in August.

“China’s Military Has Arrived,” the National Interest wrote on November 10.

A look at China’s stealth fighters, drones, rail guns, aircraft carriers, submarines, anti-satellite weaponry, cyberattack technology and huge and diverse array of ballistic missiles makes it plain to see that China’s military power today is no laughing matter. These are all now abundant in China’s arsenals. And they present intensifying concerns for military specialists worldwide, including those in the Pentagon.

This is especially true in regard to China’s naval power. At 123 pages, the Pentagon’s latest report on China is nearly an inch thick and devotes more of those pages to Chinese naval might than to any other topic. The key takeaway is that the People’s Liberation Army Navy (plan) is “the largest navy in the region with more than 300 ships and continues to undergo rapid modernization to multi-role platforms.”

As the Trumpet noted earlier this year, China has been rapidly shifting away from its longtime focus on homeland-based defense forces toward greater naval power that enables it to assert its will far beyond Chinese borders—especially in the South China Sea. The Pentagon report confirms this shift, calling special attention to China’s increasing inventory of anti-ship cruise missiles, guided-missile destroyers and guided-missile frigates, concluding that the Chinese Navy is “augmenting its littoral warfare capabilities, especially in the South China Sea and East China Sea.”

This means China already has more war submarines than any nation, including the United States, and the gap is only widening. And even though the capability of some of China’s submarines lags behind, its fleets are being rapidly modernized.

The quick modernization of China’s Navy and its increasing ability to dominate the South China Sea means the era of relative peace that the world has experienced for the last 75 years is approaching an abrupt end. Trumpet editor in chief Gerald Flurry wrote about this in our July 2016 issue, contrasting China’s power and ambition with the U.S.’s decline, and placing it all in the context of Bible prophecy.

Since Japan’s defeat in World War ii, America has protected this vital trade route and brought peace to this part of the world. Now the American military is retreating, and other great powers are coming in to fill the vacuum. … China is intimidating the nations of Southeast Asia into submission to its will. It is forcing these countries to do what it wants. Everything is headed in the direction of war.

Mr. Flurry explained that his understanding of China and where its military modernization is leading is based on Bible prophecy. In Deuteronomy 28:52, God warns the nations of Israel that He will transfer control of the world’s strategic sea gates over to their enemies. Mr. Flurry explained that this is “a prophecy for the modern-day descendants of Israel,” which means “specifically the United States and Britain.”

Today, we see China’s military becoming a fierce and formidable force, and we see it using its naval might to assert control over the South China Sea and the sea gates allowing access to it. This is happening in locations that just a few years ago were under the control of the U.S. and Britain. Now these gates are in China’s hands, which shows that this prophecy in Deuteronomy is in the process of being fulfilled.

Today’s news shows the fulfillment of ancient biblical prophecies. Specific prophecies. And the Scriptures show in passages such as Matthew 24:21-22 and Daniel 12:1 that this is leading to a time of unprecedented world war.

But there is great cause for hope tied to these trends. They show that God is working to reach this rebellious world, so that He can finally teach them to love His way of peace and to know and love Him. God will soon bring a decisive end to mankind’s suffering.

All this prophesied destruction is what it will take for God to reach this world! After this, people will be ashamed—and they will get to know God! … Yes, there is a lot of bad news when you consider what it takes to get people to the point of knowing God. But ultimately, the outcome is spectacularly good news!

To understand these prophecies and the life-changing hope connected to them, please read Mr. Flurry’s article “China Is Steering the World Toward War” and order his free book Ezekiel: The End-Time Prophet.