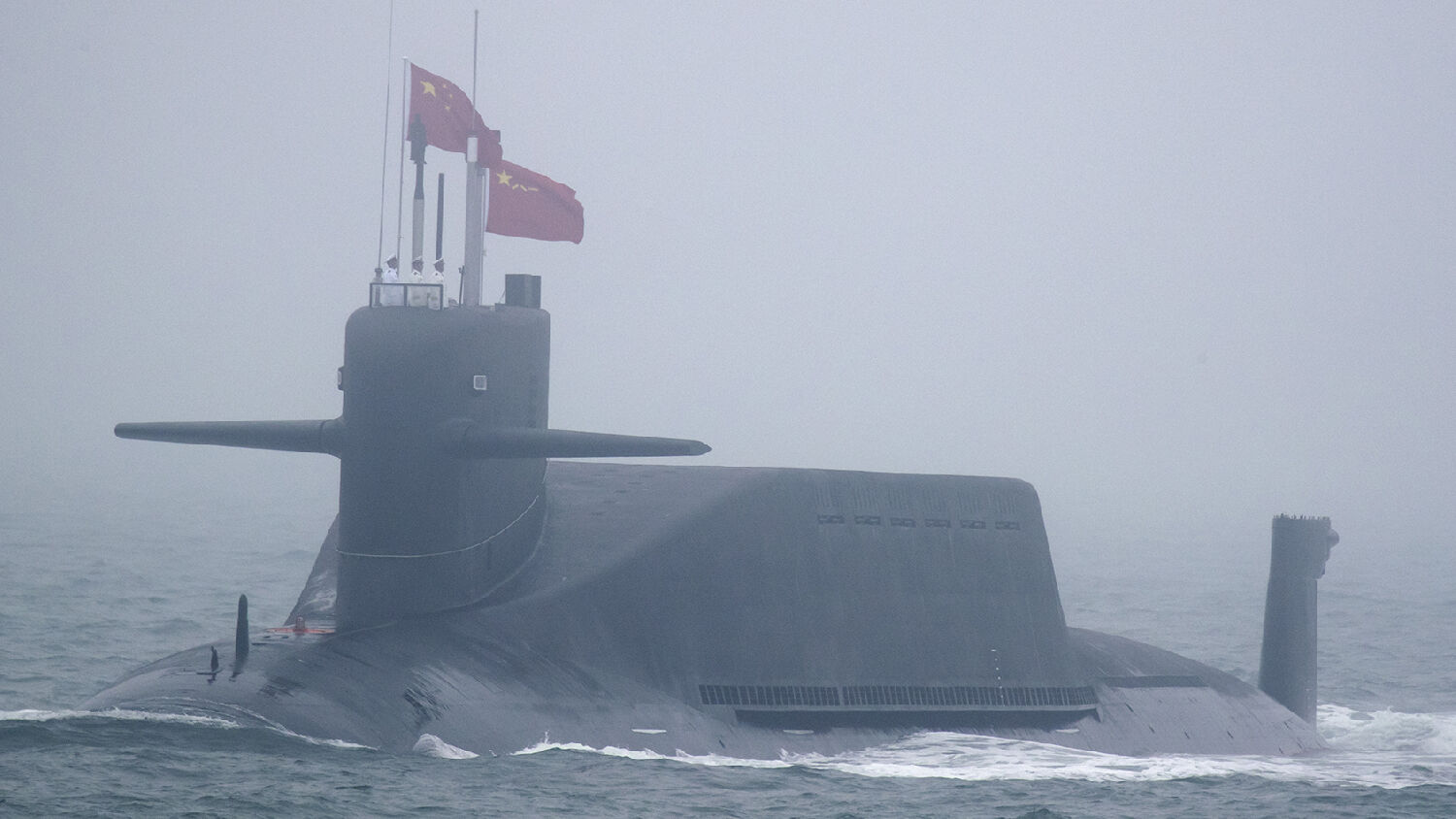 A new Type 094A Jin-class nuclear submarine participates in a naval parade on April 23 to commemorate the 70th anniversary of the founding of the Chinese People’s Liberation Army Navy.
MARK SCHIEFELBEIN/AFP/Getty Images

The American Navy struggles to maintain its advantage.

The Chinese Navy is quickly building one of the world’s strongest submarine fleets, which now includes a credible sea-based nuclear deterrent, according to a May 2 report by the United States Department of Defense.

China’s People’s Liberation Army Navy is “an increasingly modern and flexible force,” the report says, and modernizing its submarine fleet is a “high priority” for China.

The Navy now possesses 50 conventional attack submarines and 12 nuclear models, six of which are the Type 094 models that can carry 12 JL-2 nuclear ballistic missiles. The report says the Type 094 is “China’s first credible, sea-based nuclear deterrent.”

This means China is now among the few nations that can launch nuclear strikes from under the waves, joining France, India, Russia, the United Kingdom and the United States.

Submarine nuclear launch capability greatly reduces the chances that a nation’s nuclear forces can be wiped out in a preemptive strike. If a country with this capability is attacked, its hidden submarines would be able to retaliate. Such a deterrence discourages nuclear powers from trying to win a nuclear war with an overwhelming first strike.

In addition to a nuclear deterrence, China’s increasing prioritization of submarines is intended to help the country “achieve maritime superiority within the first island chain,” which extends from Japan to Indonesia. The strategically vital South China Sea lies within this region that the Chinese are increasingly determined and increasingly armed to control.

“There are 400 foreign submarines in the world, of which roughly 75 percent reside in the Indo-Pacific region,” U.S. Navy Adm. Philip Davidson said during a Congressional testimony in March. “One hundred and sixty of these submarines belong to China, Russia and North Korea. While these three countries increase their capacity, the United States retires attack submarines faster than they are replaced.”

The U.S. Navy said in late 2016 that it required 66 attack submarines to maintain its undersea warfare advantage over rivals. But as of last month, it had only 51 operational units. Writing for National Interest, David Axe noted: “America’s submarine shortfall, which has been decades in the making, likely will get worse before it gets better. Even if the Navy could afford more subs, it lacks shipyards to build them.”

Vice Adm. Bill Merz agrees with Axe’s assessment, recently telling senators: “Where we sit today is, we can’t build ships and deliver them in time to fill in that dip.”

When placed in the context of Bible prophecy, the might of China’s Navy compared to America’s, including the quickly tipping scales of submarine power, is deeply significant. As China’s naval buildup continues, the nation is also asserting ever tighter control over the South China Sea, reinforcing its first overseas base in the African country of Djibouti, and preparing to open a naval base in Pakistan. The Chinese are also stealthily laying an economic foundation for several other naval hubs around the globe. As its submarine forces and other naval power grows, China will be positioned to develop and defend these locations.

Trumpet editor in chief Gerald Flurry wrote in the July 2016 Trumpet issue that China’s increasing naval might—in the South China Sea and beyond—demonstrates that “China is steering the world toward war.”

China is challenging “seven decades of American naval dominance in the Pacific Rim,” he wrote. This trend “should alarm the world!”

Mr. Flurry continued, “Since Japan’s defeat in World War ii, America has protected this vital trade route and brought peace to this part of the world.” But since the U.S. is now backing down in this region, “other great powers are coming in to fill the vacuum,” he continued. “China is intimidating the nations of Southeast Asia into submission to its will. It is forcing these countries to do what it wants. Everything is headed in the direction of war.”

Mr. Flurry’s analysis of what China’s rising naval power will lead to is founded on Bible prophecy.

This is “a prophecy for the modern-day descendants of Israel!” Mr. Flurry wrote. “Two nations in particular represent Israel in this end time: America and Britain.”

With China quickly amassing naval power, including building one of the world’s deadliest submarine fleets, the nation will soon be able to block the U.S. and UK out of not just the Asian maritime regions that they once controlled, such as the South China Sea, but even those that lie thousands of miles from China.

The fact that China’s growing naval might is giving it control over strategic locations that just decades ago were under the control of the U.S. and Britain, and the fact that China’s Navy is growing in a way that challenges America’s maritime dominance, show that the prophecy in Deuteronomy is in the process of being fulfilled. China’s increasing focus on modernizing its submarine forces, further boosting China’s naval might, could speed the fulfillment of these prophecies even more.

Today’s news is clearly fulfilling ancient Bible prophecies, and the prophecies show that this is leading to a time of unprecedented war and devastation (Matthew 24:21-22).

But there is also great cause for hope in these trends, because they show that God is working to reach the world so that He can end mankind’s suffering.

All this prophesied destruction is what it will take for God to reach this world! After this, people will be ashamed—and they will get to know God! Ezekiel repeatedly talked about that inspiring conclusion (e.g., Ezekiel 6:7; 7:4; 11:10; 12:20; 13:9; 23:48-49; etc). Yes, there is a lot of bad news when you consider what it takes to get people to the point of knowing God. But ultimately, the outcome is spectacularly good news!

To understand these prophecies and the profound hope that is tied to them, please read Mr. Flurry’s article “China Is Steering the World Toward War” and order his free book Ezekiel: The End-Time Prophet.