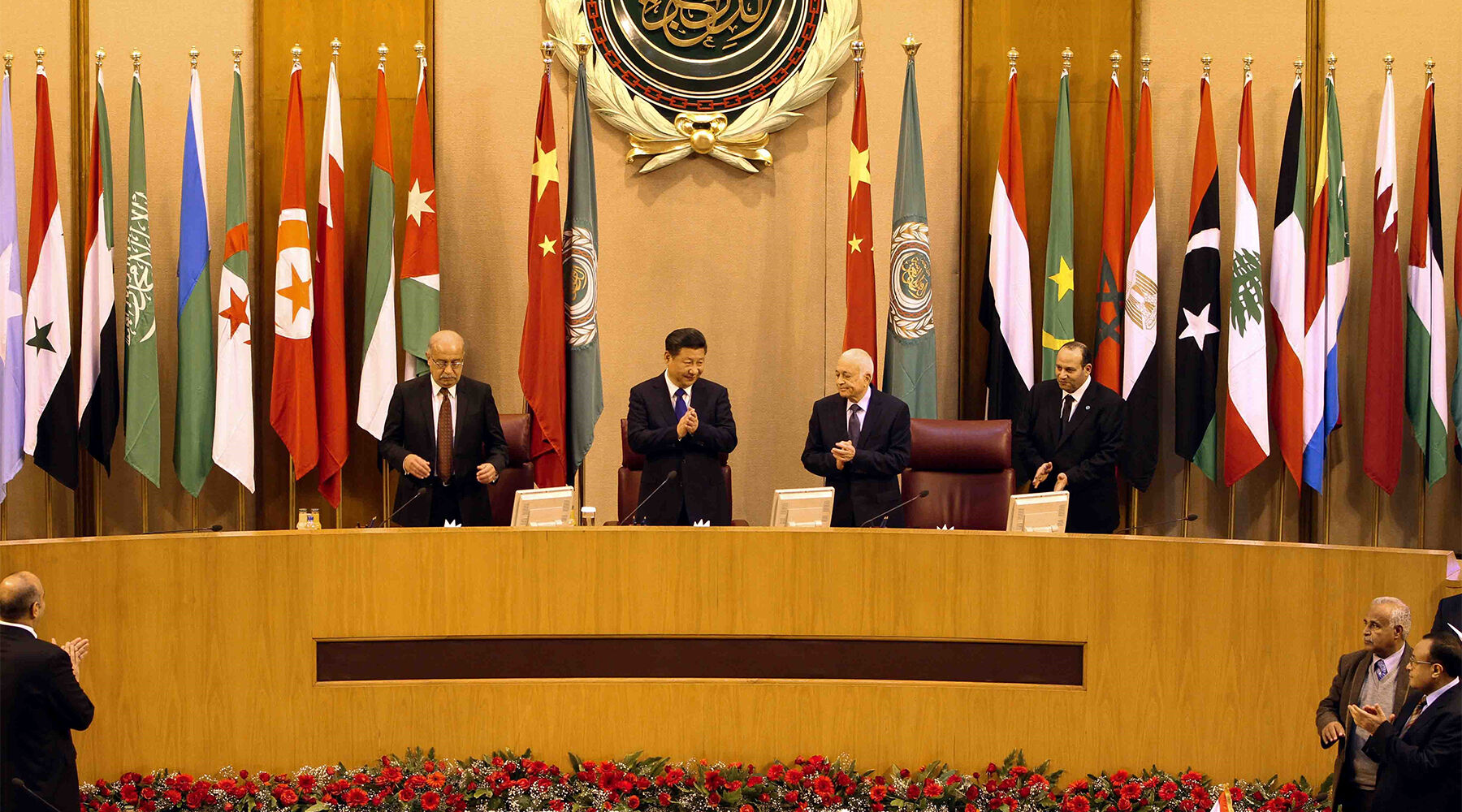 Whether influencing Syria, walking the Palestinian-Israel tightrope, or balancing the Iran-Saudi Arabia rivalry, China’s neutrality places it in a unique position in the Middle East.

From the July 2017 Trumpet Print Edition

In recent centuries, many of the great global powers have involved themselves deeply in the Middle East. The United Kingdom, France, Russia and the United States have all engaged with nations in the region to varying degrees. Each was unsuccessful at bringing long-term stability to the volatile region. Each became friends with a few Middle Eastern nations—and enemies with far more.

China, however, has historically played only a marginal role in the Middle East. China was a latecomer to the international system, and its decades-old policy of noninterference has minimized its diplomatic and security engagement abroad. In the Middle East, this has allowed Beijing to posture itself, at least superficially, as a comrade to all countries, and an opponent of none.

“Instead of looking for a proxy in the Middle East, we promote peace talks,” Chinese President Xi Jinping said in a speech to the Arab League in January. “[I]nstead of seeking any sphere of influence, we call on all parties to join the circle of friends for the Belt and Road Initiative; instead of attempting to fill the ‘vacuum,’ we build a cooperative partnership network for win-win outcomes.”

It is clear that the rapidly rising China is scorning the forays the traditional great powers have made into the Middle East and is now attempting to capitalize on its unique position of neutrality to exert more influence in the region.

China’s relationship with the Syrian regime is often overshadowed by that of Russia and Iran. But Beijing and Damascus have maintained close diplomatic ties since 1956, and China is among the few nations to retain its Syrian Embassy throughout the ongoing war. In 2014, China sold hundreds of antitank missiles to the regime of Syrian President Bashar Assad. Last year, China appointed a special envoy to deal with the Syria crisis and said it would boost military cooperation with Assad’s regime.

During an interview in March, Assad called China “a real friend” he could rely on and said Syria-China ties would be “on the rise.”

Assad’s kind words followed China’s decision in February to wield its United Nations Security Council veto power to help block a resolution that would have sanctioned Assad’s regime for using illegal chemical weapons against Syrians. “In that veto,” Assad said, “China … restored stability in the world” and protected “world interests.” It marked the sixth time China had used its UN veto to protect Assad’s murderous regime.

Already, China is involved in numerous building projects in Syria, mostly in the nation’s industrial sectors. Assad has said that after the Syrian conflict ends, “China can be in every sector with no exception, because we have damage in every sector.”

In Assad’s view, China is welcome to play basically as large a role as the Beijing leadership would like in the war-torn nation.

Balancing Between Iran and Saudis

In February 2016, the first cargo train from China arrived in Iran after traveling some 5,900 miles. It marked a major milestone in China’s drive to revive the ancient Silk Road, with its Belt and Road, or One Belt, One Road, initiative. China’s Xinhua news agency said the train’s arrival also “opened a new chapter of win-win cooperation between China and Iran.”

But even before this “new chapter” was opened, China-Iran ties were strong. During the Iran-Iraq War of the 1980s, China was the Islamic Republic’s primary weapons supplier. During the decades when international economic sanctions were in place against Iran, China’s relationship with the Islamic Republic continued to improve. In 2009, when antigovernment protests erupted in Iran, China even sold the regime anti-riot equipment to help it squelch the demonstrations.

In March of 2017, China’s largest telecom equipment manufacturer pleaded guilty to accusations from the U.S. that it sold American-made electronics to Iran from January 2010 to April 2016, in violation of the U.S. embargo on Iran. The company agreed to pay $1.19 billion for its crimes.

Beijing also played a key role in the P5+1 negotiations that dismantled those sanctions on Iran. In January 2016, just after the sanctions had been lifted, President Xi became the first international leader to travel to Tehran. During the visit, he signed 17 deals with Iranian leaders. China is now Iran’s largest trade partner, and over the next decade, the two nations plan to boost trade to $600 billion.

Yet even as China has forged a partnership with the Iranians, it has managed to simultaneously build ties with Iran’s longtime regional nemesis, Saudi Arabia.

For decades, Saudi Arabia has depended on China for weapons, including armaments that the U.S. refuses to sell the Saudis due to their opposition to Israel. In 2016, China and Saudi Arabia held their first joint military exercises. On March 16 this year, another milestone was reached when Saudi Arabia said it would be partnering with Beijing to build missile-armed drones in Saudi Arabia. This was the first such project Beijing has licensed in the Middle East.

From 2002 to 2016, Saudi Arabia was China’s top supplier of imported crude oil. Although Russia overtook the Saudis last year, they remain a close second. In March 2017, Saudi King Salman bin Abdulaziz traveled to Beijing, and reports emerged that China would become the main investor in the forthcoming initial public offering of Aramco, Saudi Arabia’s state-owned oil firm. At an estimated $2 trillion, Aramco will be by far the highest-valued company on the planet, and China is set to buy a substantial share of it.

China also offered in December to broker a peace deal in Yemen between the Iran-backed Houthi rebels and the Saudi-led coalition fighting against them, and the Houthis’ chief negotiator met with the Chinese director-general in Beijing to discuss terms.

The Century Foundation says China’s success in fostering partnerships with both Riyadh and Tehran means Beijing is “well placed, and apparently interested, in mediating the simmering rivalry between two of its closest allies in the region, Iran and Saudi Arabia” (April 6).

Regarding the Middle East’s most volatile conflict, China has successfully walked the tightrope for many years, establishing an ostensibly neutral position for itself.

Back in 1988, Beijing won great favor with the Palestinians when it became one of the first powers to recognize their self-declared state of Palestine. Since then, the Chinese leadership has been calling for a two-state solution, based on the pre-1967 borders, with East Jerusalem designated as the Palestinians’ capital. In 2016, in a diplomatic victory for the Palestinians, China formalized these appeals in its first Arab Policy Paper.

Though uneasy about China’s historic support for the Palestinian cause, Israel has developed a strong economic relationship with China. During a visit to Beijing in March, Israeli Prime Minister Benjamin Netanyahu said China should “assume its rightful place … on the world stage.” He added: “We are your perfect junior partner for that effort. We are eager to work with you … I believe this is a marriage made in heaven.”

The visit concluded with China and Israel agreeing to boost their relationship to an “innovative comprehensive partnership,” and negotiating the establishment of what Xinhua called “a global technology transfer center, innovation parks and an innovative cooperation center.”

Back in 2013, after hosting Palestinian President Mahmoud Abbas and Netanyahu in Beijing in rapid succession, President Xi published a four-point plan to bring a peaceful resolution to the conflict. The next year, the Chinese upgraded it to a five-point plan.

So far, neither proposal has advanced, but both Israel and the Palestinians seem open to the idea of allowing China to mediate. Writing for Quartz, Beijing University’s Hebrew Studies director, Yiyi Chen, said Beijing’s unique position means “China is destined to interfere in the conflict between Israel and Palestine” (May 11, 2015).

“By working bilaterally with all countries in the Middle East, China will be able to exert greater pressure on them,” Yiyi wrote. “Each country will be willing to give up more for long-term peace in the region because each realizes that it needs China more than China needs it. This is a position that the United States envies. Whether China is fully ready or not, the question now is when—not if—China will ‘interfere’ in the Israeli-Palestinian conflict.”

China’s growing power in the Middle East and its attempts to exert ever more influence in the region are motivated largely by Beijing’s quest to rebuild the Silk Road. The modern Belt and Road project aims to rebuild the ancient trade route from China to Europe by enhancing connectivity and transport infrastructure along the thousands of miles that lie between the two, including a route through the Middle East.

In addition to the Middle Eastern players mentioned above, China has also developed close ties with Egypt, Kuwait, Libya, Turkey, Yemen, Pakistan and Djibouti. The sum of it all has already made China the number one exporter to the region. And it has improved not only Beijing’s economic power but also its military posturing. In Pakistan and Djibouti, for example, China controls ports that afford it precious access to the Strait of Hormuz, the Arabian Gulf, the Bab el-Mandeb, the Red Sea and the Suez Canal.

Observers can plainly see that China’s control over such potential maritime choke points is rapidly increasing. Anyone can also see that the groundwork being laid by the Belt and Road initiative—in the Middle East and beyond—is boosting China-Europe cooperation.

Isaiah 23 warns of a “mart of nations” in our lifetime, which will operate in economic partnership. The chapter says that at the helm of the partnership will be Chittim—an ancient name for modern China—and Tyre—a city representing modern Europe’s commercial center. Isaiah 23, alongside other Bible passages, says these mighty economic powers will become partners to control global commerce for a brief time.

Trumpet editor in chief Gerald Flurry explains in his booklet Isaiah’s End-Time Vision: ”The Bible contains many prophecies of that European power attacking America—and many other prophecies of America being besieged.

“That is where China and the giants of Asia enter the picture. When the [European power] attacks North America, there will be no help or sympathy from Asia.” Instead, Asia will likely help in the attack. Mr. Flurry says the fact that “China has come to possess most of the world’s strategic sea gates” shows that “there may be a brief alliance between the German-led Holy Roman Empire and certain Asian powers ….”

China’s growing influence in the Middle East may well position Beijing to mediate in some of the region’s prolonged rivalries. But the far deeper significance of China’s growing presence there is revealed in these Bible prophecies. China’s Belt and Road initiative to connect itself to Europe through the Middle East is already redirecting some major avenues of international trade in a way that economically sidelines the United States.

These developments point to some dark times ahead for the U.S. and some of its allies. But these dark times will be immediately followed by the brightest and most radiant epoch in mankind’s history. Mr. Flurry writes: “[W]hat a dynamic market of nations it is. All of them are going to besiege America, Britain and the Jewish nation. … But that trading partnership won’t last long. Soon they will clash, just before Jesus Christ returns and destroys both of them” (ibid).

China’s growing power in the Middle East and beyond is leading to the return of Jesus Christ! He will return and usher in an age of peace, stability and prosperity for the Chinese, Middle Easterners, Europeans, Americans and all other peoples.