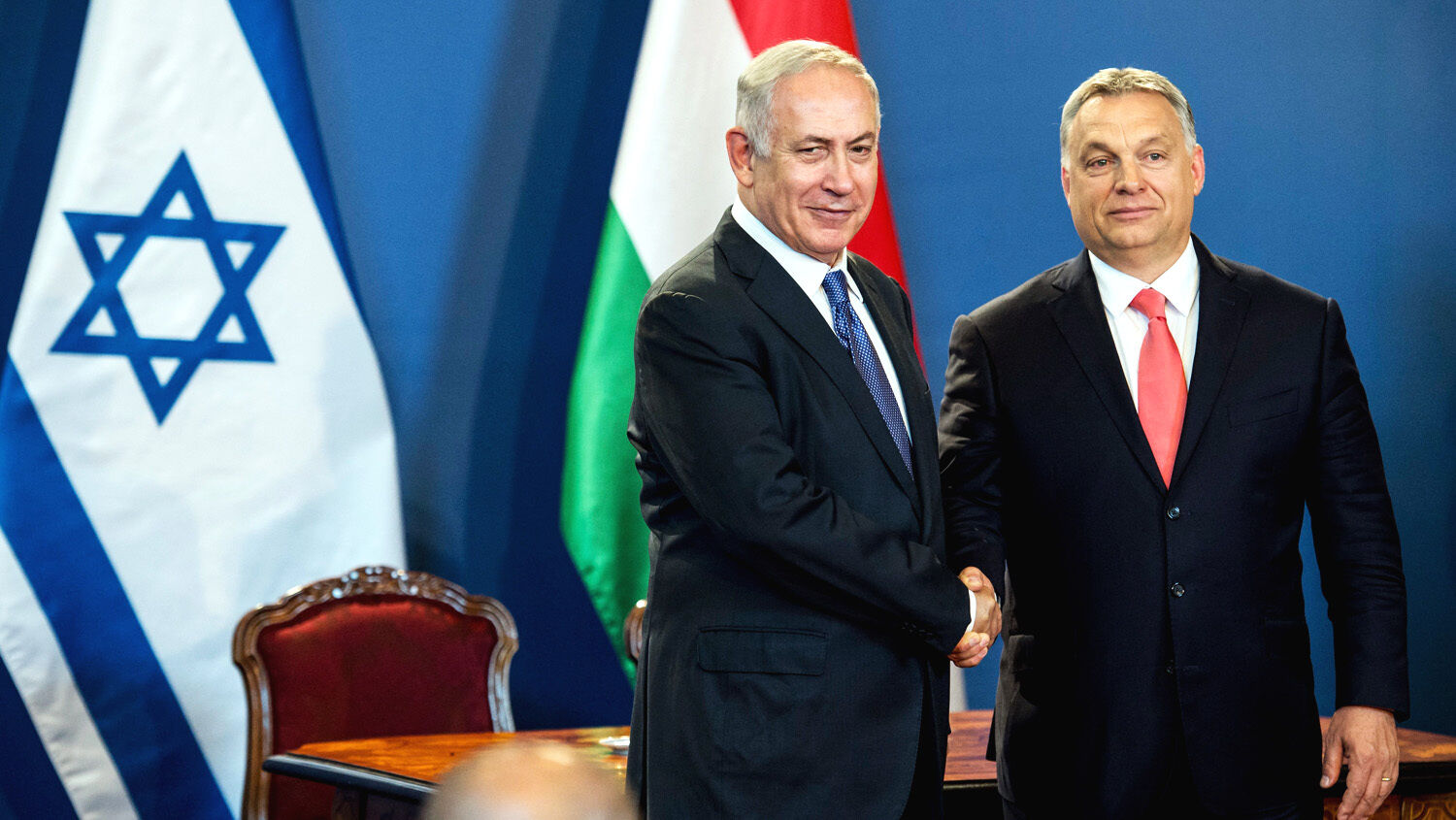 A backstab in the making

Israel is a good candidate for the world’s most friendless country. Its neighbors in Gaza, Lebanon and Syria are committed to its destruction. Most countries refuse to recognize Israeli sovereignty over Jerusalem and are constantly trying to pry it from its control. With the election of Benjamin Netanyahu’s new conservative government last year, Israel had suddenly become even more friendless. Traditional allies like the United States are attacking Israel in forums like the United Nations.

Israel needs friends on the world stage. But with most of the world alienating Israel, Jerusalem is branching out to some unorthodox allies. And some of these allies may be, given historical context, a bit surprising.

When Netanyahu officially formed his government last month, Orbán sent him a telegram, saying, “Our commitment to the strategic partnership between the two countries and the security of Israel is as robust as possible.”

Orbán and Netanyahu are similar in many ways. Both had brief stints as prime minister in the 1990s. Both came back years later and have since ruled their countries for over a decade. Both are conservative pariahs among the international liberal establishment. Both claim to stand for traditional values.

Viktor Orbán has also turned Hungary into a quasi-dictatorship. He has all but destroyed Hungary’s free press. His latest election victory, last April, was heavily manipulated in his favor. This included using Hungarians’ private covid-19 data in his election campaign. He’s close to Russian President Vladimir Putin, as well as many infamous far-right groups in Europe. He has been accused of whitewashing Hungary’s role in the Holocaust. He has praised Miklós Horthy, Hungary’s World War ii-era dictator and Nazi ally.

In short, he’s a fascist-sympathizing dictator-in-the-making. And he rules a country that played a major role in the Holocaust during World War ii.

Orbán wasn’t the only questionable world leader to congratulate Netanyahu. So did Italian Prime Minister Giorgia Meloni. On December 29, she tweeted:

Congratulations to @netanyahu on the formation of the new Government. I look forward to strengthening our bilateral ties and on working together to ensure stability and peace in the Middle East.

Meloni is a newcomer who’s only been in office for a few months. But according to the Times of Israel, the Italian and Israeli governments are already gearing up for a meeting. Meloni, in her political career, has associated with traditionally pro-Israel politicians. The Jerusalem Post even speculated she might move the Italian Embassy from Tel Aviv to Jerusalem.

Meloni’s party, Brothers of Italy, however, is the direct successor to Benito Mussolini’s fascist party. Mussolini’s descendant Caio Giulio Cesare Mussolini has run for office for Brothers of Italy. Meloni’s coalition partner, Matteo Salvini, has modeled himself after Mussolini—using similar slogans, poses and speaking locations as the Italian dictator once did. Meloni and her entourage are quite happy to play up their Mussolini connections, which means the current Italian government is rehabilitating literal fascism.

Why is the leader of Israel—the country founded to give Jews a home after the Holocaust—cozying up to such figures?

Orbán and Meloni are vilified by the international liberal media. They stand for traditional values—in their case, Catholic values. They are against multiculturalism and want to limit Muslim refugee intake. And they’re looking for international allies who agree with them. For Netanyahu, allying with figures like Orbán and Meloni is politically expedient and aligns well enough with his own policy aims. The governments in Hungary and Italy are becoming Israel’s diplomatic lifelines.

In short, Israel no longer sees fascism as a danger. Rather, Jerusalem has grown casual to it. The Israeli government is starting to see the far right as a friend.

But figures like Orbán and Meloni are not reaching out to Netanyahu because of any love they have for Israel. Anybody who looks back on Europe’s fascist era with fondness cannot be a genuine friend of the Jewish state. They’re doing this because they feel isolated and are looking for friends. When Budapest and Rome are less isolated and have more power, will they still be as friendly to Israel?

The Bible prophesies the contrary. Rather, this is all leading to a fascist backstab against the Jews. Notice the following prophecy, calling Israel by its ancestral name, Judah: “When Ephraim saw his sickness, and Judah saw his wound, then went Ephraim to the Assyrian, and sent to king Jareb: yet could he not heal you, nor cure you of your wound” (Hosea 5:13).

“Ephraim” in this case refers to the British people, while “the Assyrian” is a reference to Germany. (Please see here and here for a more thorough explanation.) The original Hebrew implies that both Ephraim and Judah go to Assyria. And it is in the context of Judah looking for relief from a “wound.” What is this wound? Here is what Trumpet editor in chief Gerald Flurry writes in Jerusalem in Prophecy:

Why do the Jews go to Germany, and what is Judah’s wound? The word wound is number 4205 in Strong’s Concordance. It means “in the sense of binding up: a bandage, i.e. remedy ….” Gesenius’ Hebrew-Chaldee Lexicon defines it this way: “the pressing together, binding up of a wound; hence used figuratively of a remedy applied to the wounds of the state.” In other words, the remedy is the wound! … Is the peace pact with the Arabs the Israeli wound that God refers to in Hosea 5:13? There would have been no peace pact if Judah would have trusted God instead of men.

Israel’s “peace plan” with the Palestinians is certainly “a remedy causing a wound.” As the years go by, Israel experiences more and more terrorist attacks and is increasingly targeted by the international community. A conservative like Netanyahu would be desperate to find some way for Israel to gain ground. Turning to hard-line governments in Europe that seem to give a sympathetic ear may look like the perfect solution. Hosea suggests that as Israel struggles with its problems with the Arabs, it sees a trustworthy friend in Europe.

(Hosea mentions Germany rather than Europe as a whole. But Germany is the European Union’s most powerful country and unofficial leader. Bible prophecy shows that Europe will be united under German leadership. So we can use “Assyria” to, by implication, refer to Europe at large.)

Ezekiel 23 is a companion prophecy. Judah, under the poetic name Aholibah, is portrayed as having love affairs with foreign armies: “She doted upon the Assyrians her neighbours, captains and rulers clothed most gorgeously, horsemen riding upon horses, all of them desirable young men. … And the Babylonians came to her into the bed of love, and they defiled her with their whoredom …” (verses 12, 17). Ezekiel reveals the end result of trusting in foreign partners: “[T]hey shall come against thee [Judah] with chariots … with an assembly of people, which shall set against thee … and they shall judge thee according to their judgments” (verse 24).

Herbert W. Armstrong, editor in chief of our predecessor magazine the Plain Truth, wrote the following in The United States and Britain in Prophecy: “And where, today, are the ancient Babylonians—the Chaldeans? They migrated west and settled in Italy.” We’re seeing Israel trust in countries like Italy—countries glorifying their fascist pasts—right now.

Israel trusting in supposedly friendly European governments for help with its terrorism problem was prophesied. Also prophesied is the heinous double cross these Europeans will launch on Israel. Israel then gets casual with modern-day fascism to its own peril.

There is hope in this, however. The same Bible that prophesies of Israel’s trouble prophesies the end of these troubles. God is letting all of this happen to Israel to teach an important lesson. And once this lesson is learned, God promises to take care of Israel’s security problems once and for all. To learn more, request a free copy of Jerusalem in Prophecy.