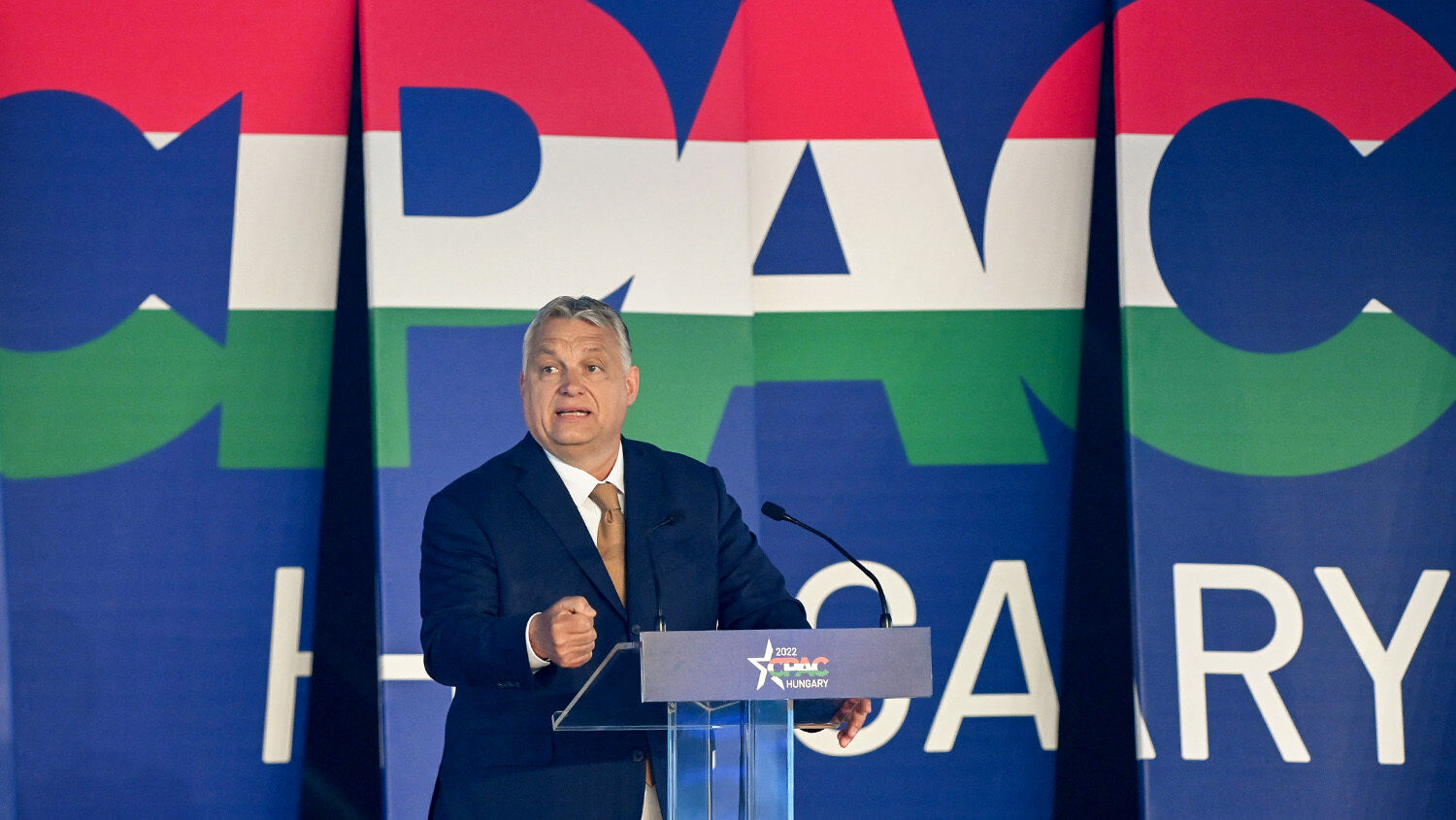 Hungarian Prime Minister Viktor Orbán speaks at the cpac in Budapest, Hungary, on May 19.
ATTILA KISBENEDEK/AFP via Getty Images

Why are American conservatives siding with European neofascists?

The Conservative Political Action Conference (cpac), “the largest and most influential gathering of conservatives in the world,” according to its website, held a conference in Budapest, Hungary, May 19 to 20. cpac was founded by the American Conservative Union in 1974. This is the first time the conference has hosted a convention in Europe.

Why did American conservatives choose Hungary to host cpac?

Viktor Orbán leads the right-wing Fidesz party. He has ruled since 2010 (along with a brief stint from 1998–2002). A staunch conservative, Orbán supports policies anathema to Europe’s mainstream politicians. He is against accepting Muslim refugees and indoctrination of lesbian-gay-bissexual-transgender ideology. He wants Hungary’s churches to have a greater say in public policy. And he hasn’t been afraid to stand up for his policies in Brussels against Europe’s liberal elite.

In his keynote speech Orbán said:

Let us start by saying that you politicians who love your country face a problem that we Hungarians have already tackled successfully. This problem—if I am not mistaken, both in America and Western Europe—is the domination of public life by progressive liberals. The problem is the fact that they hold the most important positions in the most important institutions, that they occupy the dominant positions in the media, and that they produce all the politically indoctrinating works of high and mass culture. They—the progressive left—tell us what is the truth and what is not, what is right and what is wrong. And as conservatives, our lot is to feel about our nations’ public life as Sting felt in New York: like a “legal alien.”

Orbán compared America’s radical-left problem with Hungarians’ struggle against communism in the late 1980s. Orbán himself entered politics as a young anti-Communist activist. Hungary under Orbán and conservative Americans seem like natural allies.

And it wasn’t only American conservatives and Hungarian politicians at the convention. Many important political figures from across Europe were also there. And many of them have interesting backgrounds.

Jordan Bardella attended. He is the acting president of the National Rally, France’s main far-right party. The National Rally’s founder, Jean-Marie Le Pen, has been convicted of Holocaust denial (he once called the Nazi gas chambers “a minor detail in the history of World War ii.”) The party’s candidate in this year’s presidential election, Marine Le Pen (Jean-Marie’s daughter), is a close associate of Russian President Vladimir Putin. Marine Le Pen was originally scheduled as a speaker but was later dropped.

Also invited was Italian Member of European Parliament Vincenzo Sofo. Sofo belongs to the Brothers of Italy, a far-right, “post-fascist” party descending from a movement formed in 1946 by Benito Mussolini supporters. In 2019, several mayors in Brothers of Italy held a commemorative dinner for the anniversary of Mussolini’s “march on Rome.”

Another invitee was Santiago Abascal. He’s the president of Spain’s Vox party, also far-right. Abascal once said that life in Spain “was better under [Francisco] Franco,” the fascist dictator who governed Spain from 1939 to 1975.

Then there was the presence of Herbert Kickl. Kickl is the leader of Austria’s Freedom Party and former minister of the interior. The Freedom Party was founded by a former SS officer. A previous leader once called to repeal Austria’s ban of the swastika. The Freedom Party sent “election observers” to the Russia-orchestrated referendum in Crimea in 2014.

Many of these parties are popular because they attack legitimate problems that mainstream parties struggle to address. Many have participated in government without introducing concentration camps and book burnings. But there’s no denying that many of their followers have a nostalgia for Europe’s fascist past. If some of the individuals in these parties were given absolute power, would they transform their countries from democracies into fascist states?

Also invited to the conference was Zsolt Bayer, a far-right Hungarian talk show host. He once called Jews “stinking excrement” and claimed that “a significant part of the Roma [gypsies] are unfit for coexistence.” Orbán gave Bayer the Hungarian Order of Merit in 2016.

These are the kinds of people Orbán associates with. Is this the kind of company American conservatives really want to keep?

Also noticeable with cpac Hungary was the lack of media coverage. Journalists from vice, Rolling Stone, Vox (no relation to the Spanish party), the Associated Press and the New Yorker were denied entry.

New Republic published an article on the conference on May 23. Along with some sensationalist claims, it made the following point:

Imagine if some prominent liberal group decided to hold a confab in Daniel Ortega’s Nicaragua or Nicolás Maduro’s Venezuela. [C]an you imagine how the right would react to such a thing? They’d go absolutely insane. They’d make sure every American knew that it happened and was aware of the three or four most shocking things that went down there. The stink of it would hang over [the Center for American Progress], and Democrats and liberals generally, literally for years and years.

Yet I Google “cpac Budapest,” and there’s hardly a story. Apart from the wire services, only the Guardian and Rolling Stone seem to have had a person there. Mostly, the media is shrugging this off as if there’s nothing to see here.

Some of these news mediums are left-leaning publications that may not get along well with American or European conservatives. But even the Joe Biden White House, which routinely disparages right-wing news sources like Fox News, at least allows their reporters to come to press conferences. Muzzling the press is something more common to Third World dictatorships.

That’s not to say that the Republican Party is “neo-fascist.” Donald Trump and Tucker Carlson are not closet neo-Nazis. But in their efforts to combat the radical left, American conservatives are making allies of some dangerous people. Some of these European figures may stand for similar policies as the American right. But there is a big difference between fighting for the freedom of your country and being an apologist for Francisco Franco.

The radical-left takeover in America is a genuine threat. But the history of the 20th century shows that fascism can be just as brutal as communism. In fighting one evil, many in America are making friends with another.

This is exactly the scenario that played out in 1930s’ Germany. The specter of Joseph Stalin’s Soviet Union hovered over Europe. Communist groups all over Europe were gaining power. Many were afraid of what would happen if one of these Moscow-controlled groups formed a government. In Germany, many saw the solution as backing the country’s most anti-Communist politician. That politician happened to be Adolf Hitler. If it weren’t for people’s fear of communism, Hitler wouldn’t have received as much support as he had running for office.

There is a spiritual dimension to this.

The radical left in America is a dangerous foe. They have all but destroyed America’s democratic political system. They are trying to set themselves up to govern for life. They are hunting down political opponents. It’s clear to many in America that there is something ominous going on in Washington.

The Prophet Daniel wrote about these conditions plaguing modern America. He prophesied of “a little horn” (Daniel 8:9), a biblical symbol for a government (see Revelation 17:12). This government “cast down the truth to the ground” and “prospered” in doing so (Daniel 8:12). Verse 13 shows this government’s enemies were “trampled under foot” (Revised Standard Version).

This prophecy was fulfilled in part by Antiochus Epiphanes. He was Greek king who ruled over the Holy Land and tyrannized the ancient Jews. His rule culminated in the “abomination that maketh desolate” (Daniel 11:31), a pagan statue placed in the holy of holies in God’s temple. This, however, was only a prophetic type of what is happening in America today.

“Virtually all commentaries agree that [the ‘little horn’] refers to Antiochus Epiphanes, a dictator who obtained rule in Palestine in 176 b.c. through deceit and flattery,” writes Trumpet editor in chief Gerald Flurry in his free booklet America Under Attack. “What they overlook, though, is that this also has an end-time fulfillment. [There is] another Antiochus-type who undermines the nations of Israel [including America] and prepares them for their destruction ….”

The Daniel 8 prophecy was fulfilled one other time in ancient history. This is when the Roman army besieged Jerusalem in a.d. 70 and completely destroyed the city (compare Jesus Christ’s words in Matthew 24:15 with Luke 21:20-24). Rome is described prophetically in the Bible as a “beast,” a vicious warrior empire led by Satan (Revelation 13:1-4). Rome fell centuries ago. But Revelation 17, another prophecy about the “beast,” shows that the empire would be resurrected. Verse 10 shows there would be seven consecutive resurrections of the Roman Empire. Six of these have come and gone, leaving one more. This last group will be composed of 10 European strongmen pooling their resources in one great superstate (Revelation 17:12-13). (Please request a free copy of The Holy Roman Empire in Prophecy to learn more.)

Bible prophecy records that this resurrected Roman Empire will revive religion in society (Revelation 13:8). It will persecute outsiders (verse 7). It will help bring in an economic revolution (verses 16-17). It will bring new life to the military (verse 4).

And it will come in the spirit of Antiochus.

“Beginning in Daniel 8:23 is a prophecy of ‘a king of fierce countenance’ rising up in the ‘latter time,’” writes Mr. Flurry. “This aligns with several other prophecies that refer to a mighty political leader who is about to emerge to lead the final resurrection of the Holy Roman Empire in Europe. He is also a type of Antiochus. He will be somewhat in the mold of Adolf Hitler, yet with far more subtlety and smoothness. But he is going to lead that European power in destroying America, Britain and the Jewish nation called Israel! This terrifying event is prophesied in dozens of scriptures.”

To learn more, please request free copies of America Under Attack and The Holy Roman Empire in Prophecy.