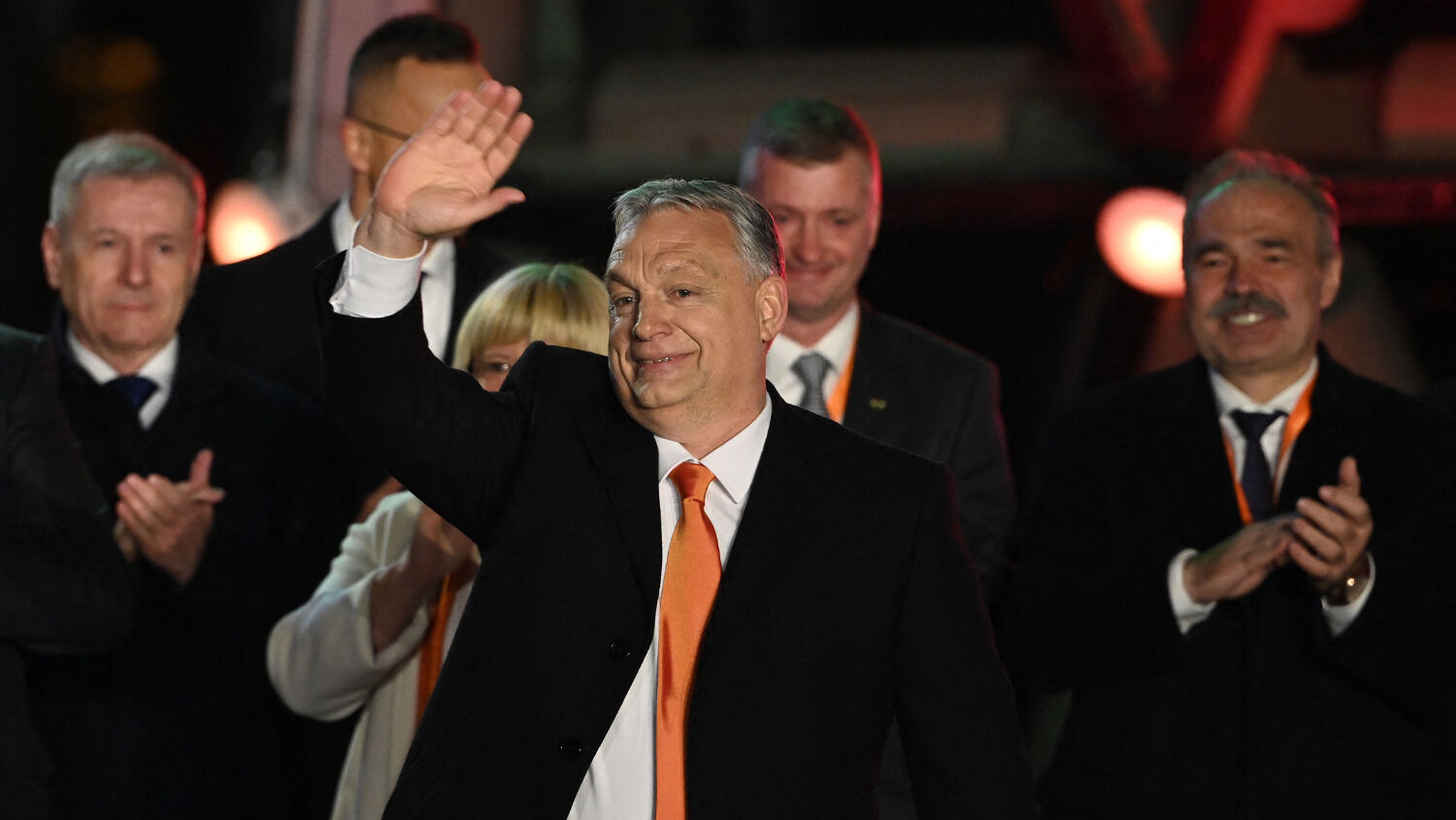 Hungarian Prime Minister Viktor Orbán and members of the Fidesz party celebrate onstage on the bank of the Danube River of Budapest, on April 3.
ATTILA KISBENEDEK/AFP via Getty Images

A coronation for Hungary’s ‘king’

Hungary concluded its parliamentary elections on April 3. Incumbent Prime Minister Viktor Orbán won a fourth consecutive term. Orbán has been in politics for decades, but this may be his biggest victory yet.

Orbàn has been prime minister of Hungary since 2010, as well as a brief period from 1998–2002. Hungary’s opposition parties were so desperate to unseat him that six different parties ran together as a united opposition. Many were predicting that the contest would be close. It wasn’t. Orbán’s Fidesz party won approximately 53 percent of the vote. The united opposition got about 35 percent. Fidesz gets to keep its supermajority in Hungary’s 199-seat parliament. During the 2018 election, Fidesz gained about 49 percent of the vote.

There are a couple of notable aspects of this election that demand closer scrutiny.

The first is the allegations of electoral fraud. In November, the Hungarian government amended a law on citizens’ addresses. The law changed the definition of a “residence.” Now, a “residence” is not where a citizen lives, but the citizen’s place of official communication. In other words, a “residence” doesn’t necessarily mean a person’s home anymore. Putting an address as one’s “residence” without actually living there would previously have been a criminal offense. The bill was first proposed by Hungarian Deputy Prime Minister Zsolt Semjén.

This impacts elections because the parliamentary district a person votes in is determined by his “residence.” Now that a “residence” doesn’t have to be where a person lives, many worry that this could encourage “voter tourism.” People in the election could vote for candidates outside of their home districts.

By no longer expecting citizens to live at the address they registered as their residence, the amendments opened the door for the unsanctioned creation of fictitious addresses, that is ones where the given citizens never intended to live. … Fictitious addresses could now be registered in single-mandate districts other than the one where someone lives, which would grant them voting rights in a district other than where they would vote otherwise. Additionally, citizens not living in Hungary could now register an address in the country and, on top of their vote on the party lists, they would thus gain the right to vote also in a single-mandate district.

Now, struggling candidates could have masses of supporters from other districts vote for them. Or, in a district that naturally favors one candidate, supporters of a rival party could bus in and make the vote more of a challenge.

Then there is the incident of the ballot bags. In Targu Mures, a Romanian city with a large Hungarian minority eligible to vote in Hungary, bags stuffed with ballots were discovered in a garbage dump. Photos were shared of partially burnt ballots marked for the opposition. Both the opposition and the government accused the other side of responsibility. Péter Márki-Zay, the opposition candidate, said “Fidesz was caught red-handed with election fraud.” Fidesz, meanwhile, released a statement accusing the opposition of trying to “achieve the destruction of the votes of ethnic Hungarians in foreign countries.” It’s unknown who the perpetrators are. But considering the ballots were for the opposition and partially destroyed, Fidesz is a likely candidate.

Also of note is Orbán’s near-total control of Hungarian media. As of last year, Hungary has no radio stations independent of government influence. Orbán also has a strong hold on television and newspapers. Political advertising in Hungary is illegal. But the government has been using its media control to endorse Orbán through “public service announcements.”

This effectively silences the opposition. In the entire election, Márki-Zay was given only one opportunity to speak on Hungary’s biggest public television station—less than three weeks before the vote.

In one instance, a government website updating the public about covid-19 was used to send an e-mail alert about Orbán’s enemies trying to bring Hungary into the war in Ukraine. Klára Dobrev, a Hungarian Member of the European Parliament targeted in the e-mail, called this “using public money for obviously party propaganda.”

Radio Free Europe/Radio Liberty (rfe/rl) obtained a recording of Balázs Bende, an editor of the state broadcaster mtva, telling reporters that mtva didn’t support the opposition candidates. Those who objected were told to immediately resign.

Circumstances in the run-up to the election were so suspect that the Organization for Security and Cooperation in Europe (osco), an intergovernmental organization called “Europe’s main security and rights watchdog” by rfe/rl, sent election observers. osco rarely does so for European Union member states. rfe/rl called this “an unprecedented move.”

What was osco’s verdict?

It found that the “legal framework” for elections was “adequate.” Its statement also said “candidates were largely able to campaign freely.” But it also found many flaws. “The campaign itself was characterized by a pervasive overlap between the ruling coalition’s campaign messages and the government’s information campaigns, amplifying the advantage of the ruling coalition and blurring the line between state and party.” In other words, there was no third-world-style absolute rigging of the vote. It was not a foregone conclusion that Fidesz would have won. But Viktor Orbán still did everything he could to artificially get an advantage. But this doesn’t mean that Orbán’s rule is illegitimate, per se.

The second takeaway is that many, many Hungarians like this style of rule. Orbán’s anti-democratic tendencies are not hidden. In 2014, he famously stated he was turning Hungary into an “illiberal state.” His control of institutions like the press are not hidden. His use of government resources for private campaigning is blatant. Hungary is not a totalitarian dictatorship; this information can be easily found. Yet Orbán is still immensely popular in Hungary. Even without his manipulating of the electoral process, Orbán still could have won.

Also well known is Orbán’s good relationship with Russian President Vladimir Putin. Hungary, compared to its European neighbors, has been a “devil’s advocate” to Russia during Moscow’s invasion of Ukraine. He has allowed the North Atlantic Treaty Organization to send troops to Hungary and didn’t oppose the EU sending millions of dollars worth of help to Ukraine. But he has expressed support for Putin in other ways. As other Western leaders condemned Putin, Orbán visited Moscow in early February. Hungarian Foreign Minister Péter Szijjártó has said Budapest “[does] not support proposals for energy sanctions against Russia.” During his victory speech, Orbán included Ukrainian President Volodymyr Zelenskyy among the enemies he “overpowered.” The New York Times called Orbán “Putin’s closest partner in Europe.”

In his February meeting with Putin, Orbán referenced the “past 13 years” of working with Putin. He said that “the two of us have the longest memory of the European Union and Russia’s relationship.” And he said he hopes the Orbán-Putin relationship can be extended longer. “I’m not planning to leave,” he said. “I will run [in the election], and I would like to still stay—I have good hopes that for many years we can work together.”

This was all months before Hungary’s election. And hundreds of thousands of Hungarians still voted for Fidesz. “In many European countries, the prime minister’s stance might mean the end of a political career,” Politico wrote on March 31. “Not so in Hungary.”

In a sense, Hungarians voted for Budapest’s own “Putin”: a strongman who manipulates elections and strangles the free media. A strongman who isn’t planning on leaving anytime soon.

It’s easy to imagine such a dictator controlling a country like Russia. Russia, in its centuries-old history, has never been a functioning liberal democracy. But an illiberal regime getting control of an EU democracy is different.

Viktor Orbán isn’t illiberalism’s only European champion. France is holding its presidential elections on April 24. One of the two candidates, Marine Le Pen, is a close associate of Orbán’s and stands for similar policies. Similar popular right-wing movements exist in countries like Italy and Germany.

If Viktor Orbán is Europe’s “Putin,” then he is inspiring other “Putins” elsewhere. And the electorate aren’t too opposed.

Where will this take Europe? One source with an accurate record of forecasting has the answer. This source is the Bible.

Anciently, the power that has dominated European history and society has been the Roman Empire. Ever since Rome fell in 476 a.d., empires and strongmen have continuously tried to resurrect that empire. The Bible has a lot to say about this rising and falling empire.

Revelation 17 depicts a “beast”—a biblical symbol for an empire (see Daniel 7). This beast has seven heads (Revelation 17:3), interpreted as seven distinct incarnations of this empire (verse 10). This empire is guided by a “woman,” which in the Bible represents a church (2 Corinthians 11:1-3; Ephesians 5:22-32). This woman also represents a “great city, which reigneth over the kings of the earth” (verse 18). It is a city built on “seven mountains” (verses 9).

Six of these incarnations have come and gone—the last of them culminating in Adolf Hitler’s Third Reich. But the Bible prophesies this system would last until Christ’s Second Coming (verse 14), a future event. That means there is one more resurrection yet to come.

This beast, in the prophecy, also has 10 horns (verse 3). Revelation 17 interprets these horns as 10 kings—or individual rulers over nations—who combine their forces to form the last resurrection (verses 12-13). Hungary—with its heritage in the Habsburg Empire, another former resurrection of the Roman Empire—is a good candidate to form one of these 10 nations. And Viktor Orbán increasingly looks like he’ll become Hungary’s “king.”

“Looking at Europe today, it is difficult to imagine the appearance of another Charlemagne, Napoleon or Hitler,” theTrumpet.com managing editor Brad Macdonald writes in The Holy Roman Empire in Prophecy. “The idea of Europe participating in another destructive global conflict, let alone initiating one, seems impossible and outrageous.”

But 1,500 years of European history should warn us against underestimating the Holy Roman Empire ….

We must not merely look at Europe in its current state. It must be studied in its historical context. And we ought to consider Europe’s potential. The EU is home to 448 million people, almost 6 percent of the global population. Measured in terms of purchasing power parity, its economy is three fourths the size of China’s and almost as large as America’s. About 15 percent of all the world’s economic activity happens in the EU. EU nations have 1.9 million personnel in their armed forces. Europe is led by one of the world’s strongest, healthiest and most popular countries: Germany.

Europe has great potential to become a dominant financial, political and military power.

What Europe lacks is a strongman—or strongmen—who have the will to wield this power. But figures like Viktor Orbán are changing this. And they have millions of voters supporting them. Vladimir Putin’s Russia gives the world a good look at what happens when such a leader controls a great power. What happens when Europe gets its own “Putins”? The end result is going to shake the world. And we’re seeing the seeds of this being sown in Hungary.