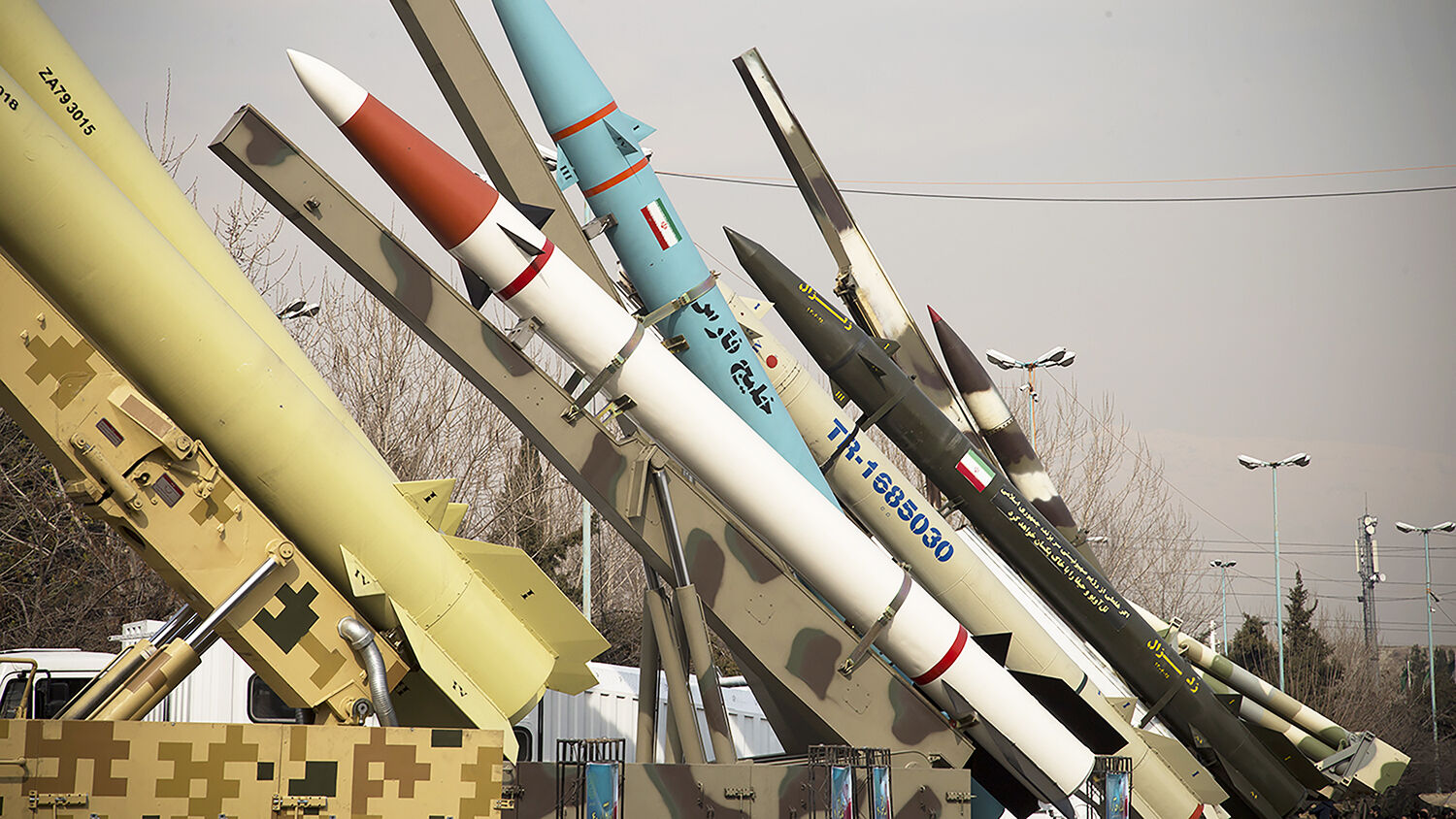 A weaponry and military equipment exhibition in Tehran, Iran, on February 7
Rouzbeh Fouladi/NurPhoto via Getty Images

The increased lethality, consistency and precision of Iran’s missile push

Iran’s swelling missile arsenal has become a source of terror. Its missile developments have yielded a missile capable of striking the Continent, causing European leaders to feel “gravely concerned.”

On November 19, Iran’s Islamic Revolutionary Guard Corps Quds Force launched four missiles at Israel’s Golan Heights, sending citizens rushing to bomb shelters. All four missiles were successfully intercepted by Israel’s Iron Dome missile defense system. The system is activated based on where the missile is calculated to land, indicating that each missile was projected to hit an Israeli population center. Iran’s missile arsenal used to be considered ineffective and inaccurate, but this is no longer the case.

“Iran has the largest and most diverse ballistic missile arsenal in the Middle East,” capable of striking targets up to 1,250 miles away, reaching both Israel and southwestern Europe, stated a November 19 United States Defense Intelligence Agency (dia) report.

Lt. Gen. Robert P. Ashley Jr. wrote in the report’s introduction, “[Iran’s] substantial arsenal of ballistic missiles is designed to overwhelm” its enemies. Iran does this through sheer number of missiles and by distributing those missiles to its expansive proxy networks, making it impossible to know where the next attack will come from. Iran’s missile force is “becoming increasingly survivable, precise and responsive.”

The longer Iran is allowed to augment its missile technology, the more dangerous its missile force becomes.

After the Iran-Iraq War (1980–1988), Iran realized the value and necessity of developing an effective ballistic missile arsenal, and it has been a large part of Iran’s military ever since. Although its missile force contains older, inaccurate models, Iran is continually improving both the delivery and guidance systems to increase the range and accuracy of its missiles. As a result of these enhancements, it has developed a lethal missile force.

Iran has made considerable progress in the field of cruise missile development. Unlike ballistic missiles, which are guided by initial propulsion into the atmosphere and then fall to their targets, cruise missiles are accurate, low-flying missiles that are guided all the way to their destinations.

In 2015, Iran displayed its nuclear-capable Soumar missile, which it claimed had a range of 1,250 miles. While celebrating the 40th anniversary of the 1979 Iranian Revolution, on February 2, Iran showcased its newly developed Hoveyzeh cruise missile, a Soumar variant—as a counter to Israel’s successful Arrow-3 missile defense system test. Iran claims the Hoveyzeh missile, an attempt at a U.S. Tomahawk equivalent, was successfully tested at a range of 840 miles.

Because of this missile’s low-flying, mountain-hugging, sea-skimming technologies, it is a nightmare for missiles defense systems, according to National Interest. Because its predecessor, the Soumar, was nuclear-capable, it is probable that the Hoveyzeh can also carry a nuclear warhead. This missile, if reports are accurate, is perhaps Iran’s most deadly weapon.

On September 15, Iran launched several cruise missiles and attack drones at the world’s largest oil processing facility in Abaqiq, Saudi Arabia. The missiles passed through Saudi Arabia’s American-made Patriot missile defense systems and damaged several structures. The attack temporarily halted half of the kingdom’s oil exports, causing oil prices to spike as much as 20 percent around the world. After examining the wreckage, some analysts have concluded that the missiles used in the attack were either Soumar or Hoveyzeh, highlighting just how dangerous and effective these missiles really are.

These pieces definitely line up with the Hoveyzeh cruise missiles built by Iran. pic.twitter.com/Fkx6pL0ekZ

Iran’s Shahab-1, Shahab-2 and Qaim-1 are liquid-propellant short-range ballistic missiles. These missiles were first purchased from Libya, Syria and North Korea, but Iran has since made improvements to their delivery and guidance systems.

Of these three, the Qaim-1 has the longest range of at least 465 miles. Iran supplies Qaim-1 missiles to the Houthis in Yemen. Houthi variants of the Qaim-1 missile have proved to fly over 560 miles away to Saudi Arabia’s capital city, Riyadh. On Oct. 1, 2018, Iran successfully struck Islamic State targets in Syria using Zolfaghar and Qaim-1 missiles.

Perhaps Iran’s most effective and diverse short-range ballistic missile is the Fateh missile. Unlike the previous three, the Fateh missile class uses solid fuel, making it less volatile and easier to handle and store. The Fateh-110 missile was first tested in 2001 with an initial range of 125 miles. In 2010, improvements to the rocket increased its range to 185 miles. By 2015, a new variant, the Fateh-313, was developed with a range of 310 miles.

Unlike most of Iran’s missiles, the focus of the Fateh missile was not range, but accuracy. The onboard satellite navigation systems allow the missile to strike within three meters of its target. In a high-profile demonstration on Sept. 9, 2018, Iran fired seven Fateh-110 missiles at the Kurdish Democratic Party of Iran headquarters in northern Iraq, successfully striking the building and causing massive damage, proving the missiles to be precise and highly effective.

Reports reveal that Iran has given Fateh-110 missiles to its Syrian militias and to Hezbollah in Lebanon, which now has the ability to strike anywhere within Israel. Hezbollah has more than 150,000 missiles in its arsenal, several of which are accurate and precision-guided—all of which could be directed against Israel.

Variants of the Fateh missile, called the Hormuz-1 and Hormuz-2, are equipped with electro-optical and antiradiation homing, making them deliberately designed for striking ships. At the Fateh variant’s inauguration, Iran played a propaganda video depicting it striking a simulated United States warship.

#IRGC publish Video of Khalij Fars ballistic missile with a range of 300km based on the Fateh-110 missile. It is equipped with a 650 kg explosive warhead and an interception evading guidance system pic.twitter.com/l2EeZbQoxR

The dia report said, “Iran could use these [anti-ship ballistic missiles], in concert with its other countermaritime capabilities [like submarines and sea mines], to attack adversary naval or commercial vessels operating in the Persian Gulf or Gulf of Oman.”

Additionally, if Iran gives these missiles to its Houthi proxies, it could also use the missiles to attack foreign vessels in the Red Sea and Bab el-Mandeb strait. Attacking this critical trade route would temporarily, or permanently, halt trade through the Red Sea, forcing trade vessels to reroute around the southern tip of Africa. This elongated shipping route would cause a significant rise in prices around the world, especially in North America and Europe.

Iran’s newest upgrade to its Fateh missile, called “Dezful,” was inaugurated in February. The Dezful is the longest-range Fateh missile. With a reported range of 620 miles, the Dezful positions Israel within accurate striking distance of Iraq, which is virtually an Iranian puppet and has already received shipments of Iranian missiles. If Iran were to lose its grip on Syria and Lebanon, this missile ensures that it would could pose a significant threat to Israel.

Iran also has a very extensive medium-range ballistic missile arsenal. The Shahab-3 has a maximum range of 1,250 miles but is very inaccurate. In 2015, Iran publicized the first launch of the Emad-1 variant. This missile is equipped with a maneuverable reentry vehicle, allowing the system to strike with “near-precision accuracy” within the same 1,250-mile range. Iran’s medium-range ballistic missiles allow it to strike parts of Russia, Ukraine, Romania, Greece, Turkey, Egypt, Ethiopia, India and China.

Since 2008, Iran has been launching and improving multistage space-launch vehicles. According to the dia, these delivery systems “could also aid Iran’s development of longer-range ballistic missiles … and could also serve as a test bed for developing [intercontinental ballistic missile] technologies.” If Iran were to develop this technology, all of Europe, including Britain and Germany, would be within striking distance of potentially nuclear-capable missiles.

Iran has reportedly test-fired a medium range missile, but how far can they reach?

US secretary of state Mike Pompeo has said he would be “happy” to go to Iran. Read the latest here: https://t.co/ceFTjBRVv4 pic.twitter.com/rJM9kKSc71

We have been warning of Iran’s pushy foreign policy since the early 1990s. This belligerent behavior was prophesied in the book of Daniel 2,500 years ago: “And at the time of the end shall the king of the south push at him: and the king of the north shall come against him like a whirlwind, with chariots, and with horsemen, and with many ships; and he shall enter into the countries, and shall overflow and pass over” (Daniel 11:40).

Trumpet editor in chief Gerald Flurry identifies radical Islamist extremism, led by Iran, as this pushy Middle Eastern “king of the south” in his free booklet The King of the South. He writes:

The king of the south is about state-sponsored terrorism. That is how Iran became king! Daniel 11:40-43 is an end-time prophecy. It is about a nation that is always pushy in its foreign policy. It pushes until it starts a war.

Iran’s state-affiliated Tasnim news agency quoted Cmdr. Amirali Hajizadeh as saying: “All American bases and their aircraft carriers in a distance of up to 2,000 kilometers [1,250 miles] around Iran are within the range of our missiles.” One of Iran’s main goals is to kick the U.S. out of the Middle East. Whether or not Iran succeeds, Bible prophecy indicates the U.S. will not be part of the end-time conflict between Iran and “the king of the north,” a German-led Europe.

Verses 40-43 state that an end-time king of the south will gain control over Egypt, Libya and Ethiopia, giving it control of a large fraction of the world’s oil. This control will allow Iran to shut down international trade through the Red Sea. It will use its highly capable anti-ship missile arsenal to attack vessels traversing this waterway. This is especially worrying to Europe, which relies heavily on trade flowing through the Red Sea.

Through missile development, tests and attacks, Iran is beginning to push at Europe even now, and it is only going to get worse. Iran escaped the Abaqiq attack with no military retaliation, which, according to Israel Hayom, “greatly increased Iran’s appetite and willingness to push the envelope further than ever before.”

Soon, Iran’s missile force will push Europe past the brink and it will respond in a military whirlwind. For more information about this retaliation, please read the November-December Watch Jerusalem cover story, “How Iran Will Be Conquered,” by Mr. Flurry.