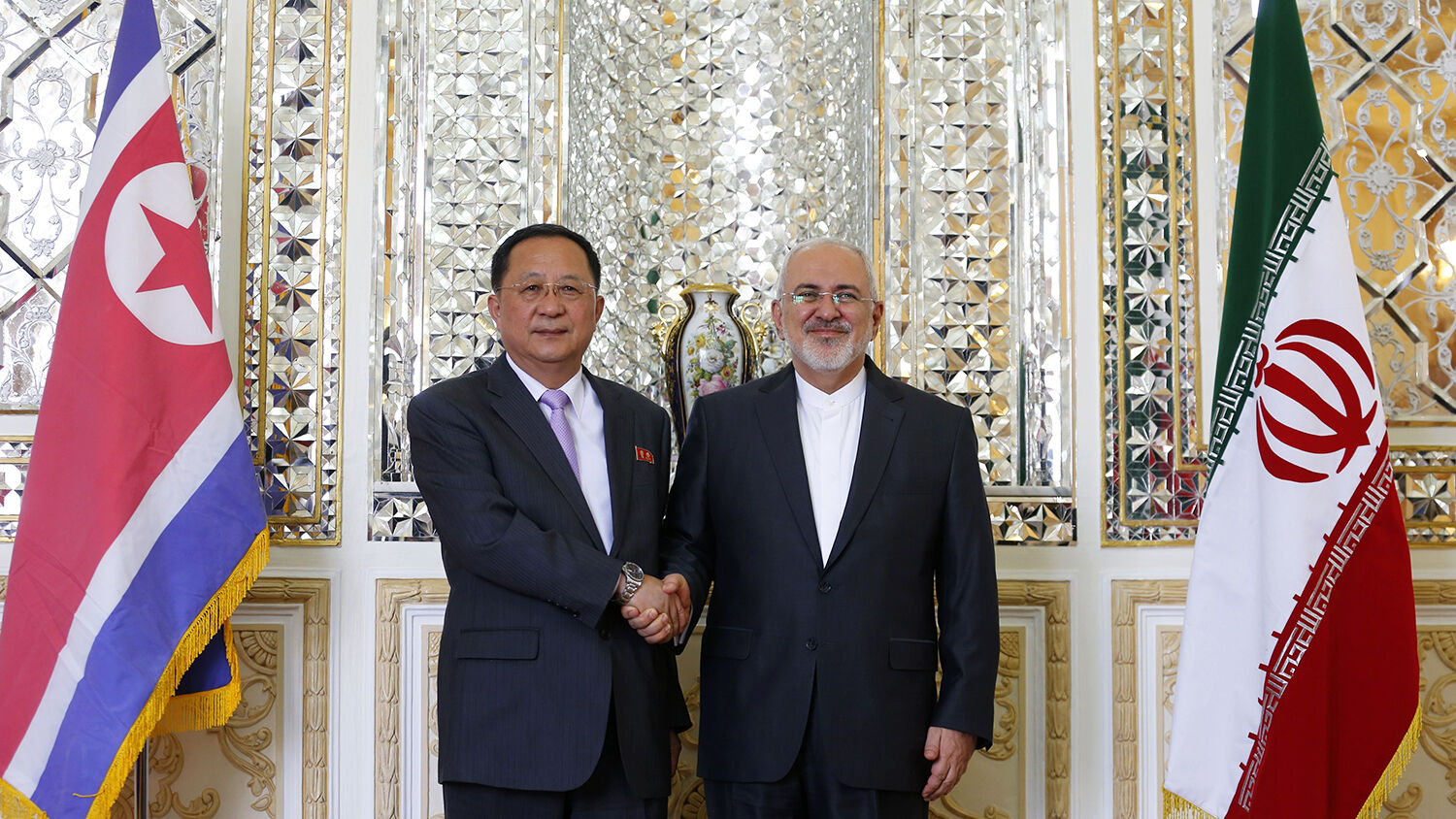 What began with shared anti-American and anti-Israel ideologies continues with shared missile and nuclear development programs.

“A nuclear Iran would be transformative, a country not easily gone to war against, and one that will have considerably more power on the regional stage,” writes Hirsh Goodman in The Anatomy of Israel’s Survival.

Iran’s frequent announcements about the advancements of its nuclear program have been widely reported in the news. As it pushes Europe to consent to its demand for sanctions relief, Iran has repeatedly broken the terms of the 2016 Joint Comprehensive Plan of Action nuclear agreement. Although its recent nuclear developments have been in the spotlight, a very important aspect of its sinister program remains dangerously underreported: Its shared nuclear cooperation with North Korea.

The two nations have a historically close relationship in the field of nuclear development, which began after the Islamic Revolution. When the whole world isolated Iran, North Korea came to the rescue. Ever since, the two radical regimes have been pushing the world closer to nuclear war.

A Prelude to Partnership

The 1979 Islamic Revolution of Iran saw the overthrow of the Western-backed Shah Mohammed Reza Palahvi by a theocratic republic led by Grand Ayatollah Ruhollah Khomeini. In response, the United States led an embargo on the new Iranian Republic. As a result, Iran sunk into a deep mire of economic instability.

Fearing the Islamic Revolution would spread to Iraq and topple his dictatorship, then Iraqi President Saddam Hussein led an invasion of Iran in 1980. It was in this desperate time of need—a time of devastating war and economic trouble—that Iran found an ally.

Attracted by their mutual anti-American and anti-Israel ideologies, the first premier of North Korea, Kim Il-sung, sought to increase diplomatic and economic ties between the two fledgling nations. The American-led embargo made it extremely difficult for Iran to acquire military armaments to use in its war against Iraq. Throughout the 1980s, the North Korean leader sent military aid to Iran.

A senior North Korean defector who worked in the munitions industries relayed his story to a journalist in South Korea. In cooperation with Iran’s Islamic Revolutionary Guard Corps, he said that he was tasked with the construction of several missile batteries on Iran’s island of Kish to enhance the Islamic Republic’s ability to control enemy ships traveling through the Strait of Hormuz. The former mechanic said, “The Iranians always remember that it was us who came to their defenses when the rest of the world isolated them.”

With North Korea’s support, Iran managed to withstand the Iraqi invasion. After the Iran-Iraq War ended in a ceasefire, the diplomatic ties between Iran and North Korea strengthened as the two nations developed even closer research and military cooperation.

In August 2012, North Korean former Vice Head-of-state Kim Yong-nam visited Tehran. During his visit, Iran and North Korea signed a formal scientific cooperation agreement calling for the establishment of joint laboratories, an exchange of Iranian and North Korean scientists, and the transfer of energy and information technology.

Israeli analysts say that Iran’s and North Korea’s missile programs actually complement each other. According to Tablet Magazine, “Pyongyang has a better mastery of the electronics used in the navigation systems of the projectiles, while Tehran is seen as having a better grasp of the solid-fuel propellants used to ignite them.” By sharing these technologies, they have increased the effectiveness of their missile arsenals.

In some cases, it seems like Iran and North Korea have been synchronizing their tests. On July 4, 2017, North Korea tested its Hwasong-14 intercontinental ballistic missile. A few weeks later, on July 27, Iran tested its Simorgh space-launch vehicle. Both rockets are said to share many significant properties.

“Is it coincidental? Maybe. But it seems like they’re learning from each other,” said an Israeli intelligence analyst in Jerusalem. “It seems to be a two-way street.”

According to U.S. and Israeli officials, no nation has as close of a relationship with North Korea in the field of missile development as Iran. According to the National Interest, Iran has the largest stockpile of ballistic missiles in the Middle East, many of which are derivatives of North Korean models.

Iran’s Shahab-3 medium-range ballistic missile, which is capable of carrying a nuclear warhead, is a variant of North Korea’s Nodong-1 missile. The Center for Strategic and International Studies claims the Nodong-1 only had a range of 930 miles, while the Iranian Shahab-3 was upgraded to a range of about 1,200 miles. Whether North Korea sold Iran a complete Nudong-1 assembly line or received approximately 150 missiles from North Korea, the two nations helped each other upgrade their missile development. The missile’s major issue was its inaccuracy, which could land up to 1.2 miles away from its target. A later variant, called the Ghadr-1, has a shorter range but is reportedly more accurate. In the early 2000s, Iran, likely with North Korea’s navigation expertise, developed the Emad warhead, which made the two ballistic missiles much more accurate, maneuverable and stable.

When Iran announced its new Khorramshahr medium-range ballistic missile in September 2017, American and Israeli intelligence officials quickly recognized similarities with the North Korean Hwasong-10. North Korea is believed to have sold the technology to Iran.

According to Uzi Rabin, a missile expert at the Begin-Sadat Center of Strategic Studies in Tel Aviv, the Khorramshahr, which has a range of 1,200 miles to 2,100 miles, “constitutes a potential threat to Europe” because if it were equipped with a “lighter weight nuclear warhead,” the missile could “thereby threaten Berlin, Brussels, Paris and Rome.”

Additionally, the Iran-backed Houthi rebels in Yemen seem to have benefited from the North Korea connection. The Houthi Scud-type Borkan-3 missile, which proved accurate within at least 800 miles in an attack against a Saudi military site on August 1, is an upgraded version of the North Korean Hwasong-6.

As Iran and North Korea continue to work together, their military cooperation has expanded from solely missile development to sharing nuclear technology.

Since 2006, Iranian officials have attended at least six North Korean nuclear tests and several North Korean parades and missile tests. According to U.S. and Israeli intelligence from Iranian opposition groups, Islamic Revolutionary Guard Corps Gen. Mohsen Fakhrizadeh, the father of Iran’s nuclear program, attended a very important nuclear test in 2013 in North Korea. According to reports, it is likely that the test was focused around the detonation of a uranium bomb. This joint research cooperation between Iran and North Korea was all in the lead-up to the Jan. 16, 2016, implementation of the Iranian nuclear agreement, even while negotiations were underway.

Once Iran was forced to sign the Joint Comprehensive Plan of Action, it was subject to a number of regulations curbing its nuclear development. Iran was also required to consent to periodic inspections from the International Atomic Energy Agency. It was at this moment that Iran’s focus shifted. The nation, which previously pushed to develop the nuclear bomb, was suddenly desiring a “peaceful” nuclear program. It went from pushing to develop an intercontinental ballistic missile to developing the technology to launch a satellite into orbit—a similar yet more advanced technology—as an attempt to cover up its sinister schemes.

Trumpet editor in chief Gerald Flurry describes Iran’s nuclear program, its desire to develop the nuclear bomb, and the flaws of the Joint Comprehensive Plan of Action in his booklet The King of the South. After the agreement was signed by Iran, he asked: “Will Iran cheat? History says yes. When has it not cheated after making a significant agreement with the West?”

A few days after the nuclear deal was implemented, Melanie Phillips explained in an article for the Jerusalem Post that Iran had “outsourced the testing of the bomb to North Korea.” North Korea’s July 4, 2017, test of the Hwasong-14 intercontinental ballistic missile and Iran’s July 27, 2017, test of a space-launch vehicle add significant weight to the argument that the relationship between these radical regimes did not end, but rather strengthened.

“[M]aybe the Iranian nuclear negotiation was a blind from start to finish,” Phillips wrote. “The real action was going on in North Korea ….” She wrote that it’s likely that if North Korea has a certain technology, Iran either has the same technology, or at the very least has access to it.

In Nuclear Armageddon Is ‘At the Door,’ Mr. Flurry writes, “It gets even worse. Kim Jong-un shares his nuclear power with Iran, the number one terrorist-sponsoring nation in the world by far!”

One of the most worrying aspects of Iran’s growing power is its flirtation with nuclear weaponry. Iran has had a nuclear program of its own for many years. Information leaks have shown that Iran, while publicly stating that its program is purely for energy use, actually want other nations to know it could be a nuclear threat. … Nuclear bombs and weapons are about to be put to use on a scale this world has never seen!

Several biblical passages indicate that nuclear war is coming. Isaiah 1:7 says the nations will become “desolate” and the cities will be “burned with fire.” Not even modern-day Israel—referring primarily to the United States, Britain and the State of Israel—will escape this warfare. (Request your free copy of The United States and Britain in Prophecy, by Herbert W. Armstrong, to understand the modern identity of ancient Israel.) Ezekiel 5:4 says, “[T]hereof shall a fire come forth into all the house of Israel.”

The book of Joel says the nuclear fallout will worsen to the point that “the sun and the moon shall be dark, and the stars shall withdraw their shining” (Joel 2:10). This horrific war is part of “the great and the terrible day of the Lord” (verse 31).

If mankind was left to himself, “there should no flesh be saved” (Matthew 24:22). This is where Iran’s push for nuclear proliferation is leading. Whether or not Iran acquires the nuclear bomb, it will galvanize a nuclear war.

Thankfully, there is hope. In the midst of this terrible destruction, Jesus Christ will return to this Earth. He will put an end to all war (Isaiah 2:4; Micah 4:3), heal the land (Hosea 6:1), and establish an everlasting kingdom of peace and prosperity (Daniel 2:44-45; Isaiah 9:6-7).

For more about Iran’s connection to North Korea and its deception around the nuclear agreement, read The King of the South, by Gerald Flurry.