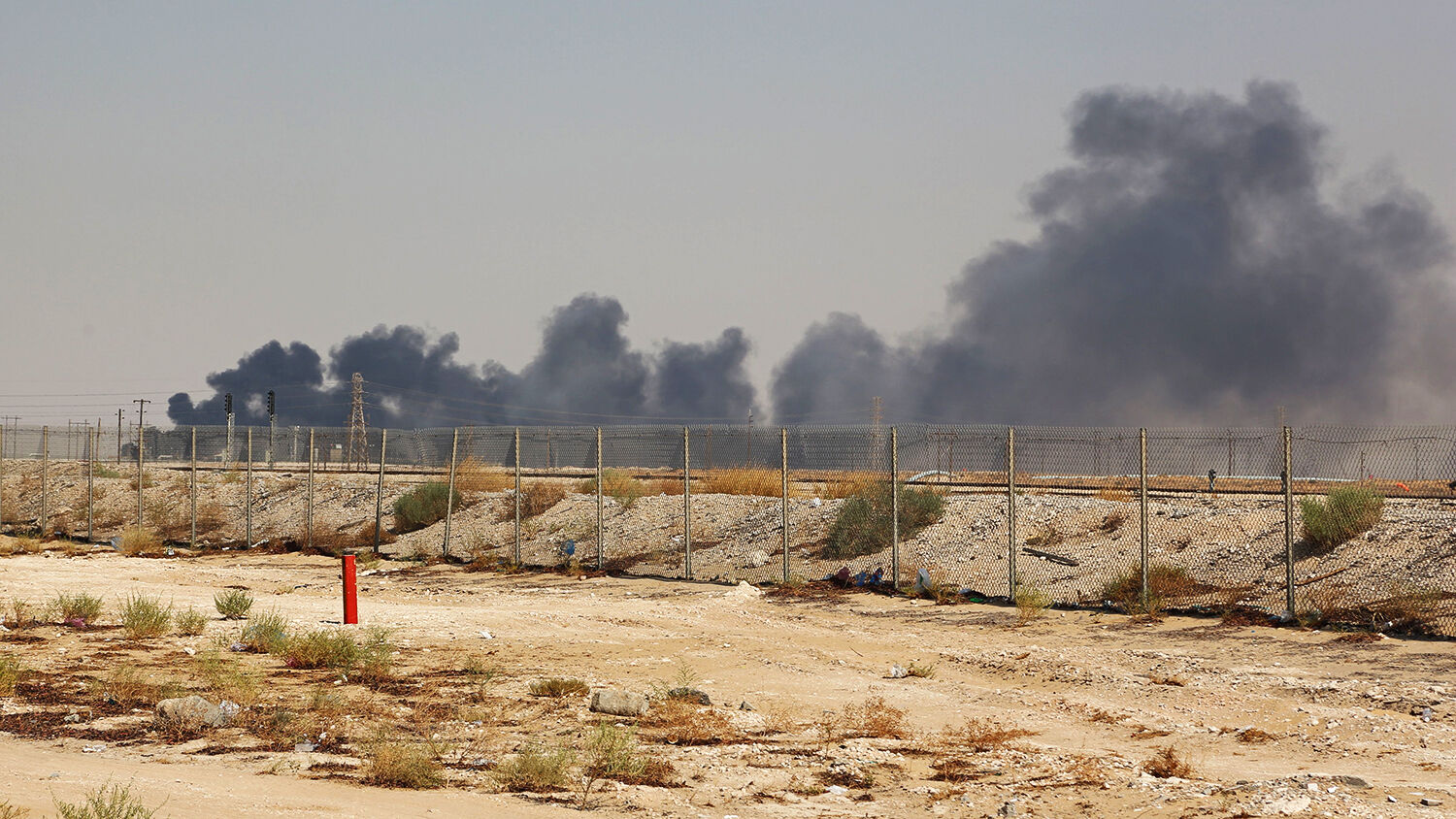 Smoke billows from an Aramco oil facility in Abqaiq about 37 miles southwest of Dhahran in Saudi Arabia’s eastern province on September 14.
AFP/Getty Images

Plumes of smoke billowed from the world’s largest oil processing facility on Saturday after a coordinated Iranian attack caused Saudi Arabia to temporarily halt half of its oil production.

According to abc News, Iran launched nearly a dozen cruise missiles and more than 20 drones in an attack against Saudi Arabia’s Abqaiq oil processing facility. Satellite images released by United States officials clearly show 17 structures damaged in the attack, most notably its storage tanks, displaying an unprecedented level of precision by Iran. Despite the Houthis’ claiming responsibility for the attack, U.S. officials agree that based on the precision of the attack and the angle of the impacts, Iran is likely to blame.

Correction: These images are taken by WorldView-1, a commercial earth observation satellite owned by DigitalGlobe. Pictures taken by #US NRO’s #USA224 are still classified and can not be released. pic.twitter.com/tzyReFz03h

U.S. Secretary of State Mike Pompeo has adamantly blamed Iran for Saturday’s attack, despite denials by Iranian officials. Pompeo posted on Twitter: “Iran has now launched an unprecedented attack on the world’s energy supply. There is no evidence the attacks came from Yemen.” Kuwait, which borders Iraq, stated that it was investigating the sighting of a drone over its territory.

“There’s no doubt that Iran is responsible for this,” another U.S. official told reporters. “No matter how you slice it, there’s no escaping it. There’s no other candidate.”

President Donald Trump was less definitive. On Twitter, he said: “There is reason to believe that we know the culprit, are locked and loaded depending on verification, but are waiting to hear from the Kingdom as to who they believe was the cause of this attack, and under what terms we would proceed!”

A senior commander of the Islamic Revolutionary Guard Corps warned that Iran was ready for “full-fledged” war. President Trump says the U.S. is “locked and loaded” to respond; however, this may be a bluff as any large-scale retaliation risks igniting regional war in the Middle East.

Pompeo blamed Iran for over 100 attacks on Saudi Arabia. The U.S. has also accused Iran of sabotaging six oil tankers. These attacks include the May 12 attack on four oil tankers in the Gulf of Oman and the May 14 attack on two Saudi oil facilities on the Aramco East-West Pipeline.

“Ever since the dual 1970s oil crises, energy security officials have fretted about a deliberate strike on one of the critical choke points of energy production and transport,” the Wall Street Journal wrote on Saturday. “Sea lanes such as the Strait of Hormuz usually feature in such speculation. The facility in question at Abqaiq is perhaps more critical and vulnerable.”

Since Saturday’s attack, oil prices have already surged 20 percent as of Monday morning, the largest jump in 28 years.

In “Crude Oil Prices Surge Most Ever After Attack Cuts Saudi Supplies,” Bloomberg wrote, “For oil markets, it’s the single worst sudden disruption ever, and while Saudi Arabia may be able to return some supply within days, the attacks highlight the vulnerability of the world’s most important exporter.”

The attack cut Saudi Aramco’s oil production by 5.7 million barrels per day and halted half of Saudi Arabia’s oil production. Aramco has not given an expected repair timeline, however a source told Reuters a return to full oil capacity could take “weeks, not days.”

According to Consultancy Rapidan Energy Group, images of the Abqaiq facility showed that about five of its stabilization towers appear to have been destroyed. It estimated that reconstruction would take months, which would hamper oil output for a prolonged period.

Helima Croft, global head of commodity strategy at rbc Capital Markets, told Reuters, “Abqaiq is the nerve center of the Saudi energy system. Even if exports resume in the next 24 to 48 hours, the image of invulnerability has been altered.” Saudi Arabia is known for spending billions of dollars to protect its oil infrastructure. But this attack is a clear message from Iran that Saudi oil is not safe!

We have been warning of Iran’s pushy foreign policy since the early 1990s. Iran’s belligerent behavior was prophesied in the book of Daniel 2,500 year ago: “And at the time of the end shall the king of the south push at him: and the king of the north shall come against him like a whirlwind, with chariots, and with horsemen, and with many ships; and he shall enter into the countries, and shall overflow and pass over” (Daniel 11:40).

Trumpet editor in chief Gerald Flurry identifies radical Islam, led by Iran, as this pushy Middle Eastern power bloc in The King of the South. He writes:

Iran is extremely radical—the king over radical Islam. Where is this nation’s pushiness leading? To war!

Verses 40-43 state that an end-time “king of the south” will gain control over Egypt, Libya and Ethiopia. This will give it control over many of the world’s major oil choke points. Control of Egypt would mean control of the Suez Canal. Control of Ethiopia would probably include control of the Horn of Africa and the Bab el-Mandeb strait. Libya is an oil-producing nation and would add a strategic base on the Mediterranean. Iran virtually controls Iraq already, the world’s fourth-largest oil producer.

Verse 40 describes how Iran would push at “the king of the north,” the German-led European Union, igniting a third world war. Why isn’t the U.S. mentioned in this clash? Mr. Flurry explains:

Arab-Iranian control over the Mediterranean Sea and the Red Sea could be the real reason the U.S. is not involved in this Mideast war in Daniel 11. Our economy is shaky, the dollar is extremely weak, and Iran could threaten or even cut off all our oil and wreck the U.S. economy to keep America out of the war.

Saturday’s attack was a demonstration of how much power Iran has achieved. The Jerusalem Post wrote, “The ability to launch 20 drones and a dozen missiles deep into Saudi territory, within 100 kilometers of U.S. bases in Bahrain and elsewhere, is not only a massive escalation, but also means U.S. forces could be targeted.”

Iran’s state-affiliated Tasnim news agency quoted Cmdr. Amirali Hajizadeh as saying: “All American bases and their aircraft carriers in a distance of up to 2,000 kilometers [1,250 miles] around Iran are within the range of our missiles.” One of Iran’s main goals is to kick the U.S. out of the Middle East. Whether or not Iran succeeds, Bible prophecy indicates the U.S. will not be part of this end-time conflict between Iran and Europe.

In 2003, Mr. Flurry wrote: “Germany and Europe get over a third of their oil from the Middle East. … Oil and money give the king of the south power to ‘push’ and trigger a world catastrophe!” Oil is Europe’s precious commodity, and Iran’s control over the global oil trade is an aspect of Iran’s prophesied push against Europe. He said that Iran’s attack on global oil trade could help trigger a collapse of the Western world’s weak currencies, which would “in turn could cause Europe to quickly unite into the most powerful economic bloc in the world. That very event is prophesied to occur in your own Bible!”

Iran is testing how far it can push its neighbors. Eventually it will push Europe over the brink and that German-led power bloc will retaliate in a “whirlwind” attack, crushing the king of the south and ultimately leading to the return of Jesus Christ.

For more information, request our free booklets The King of the South and Germany’s Secret Strategy to Destroy Iran, by Gerald Flurry.