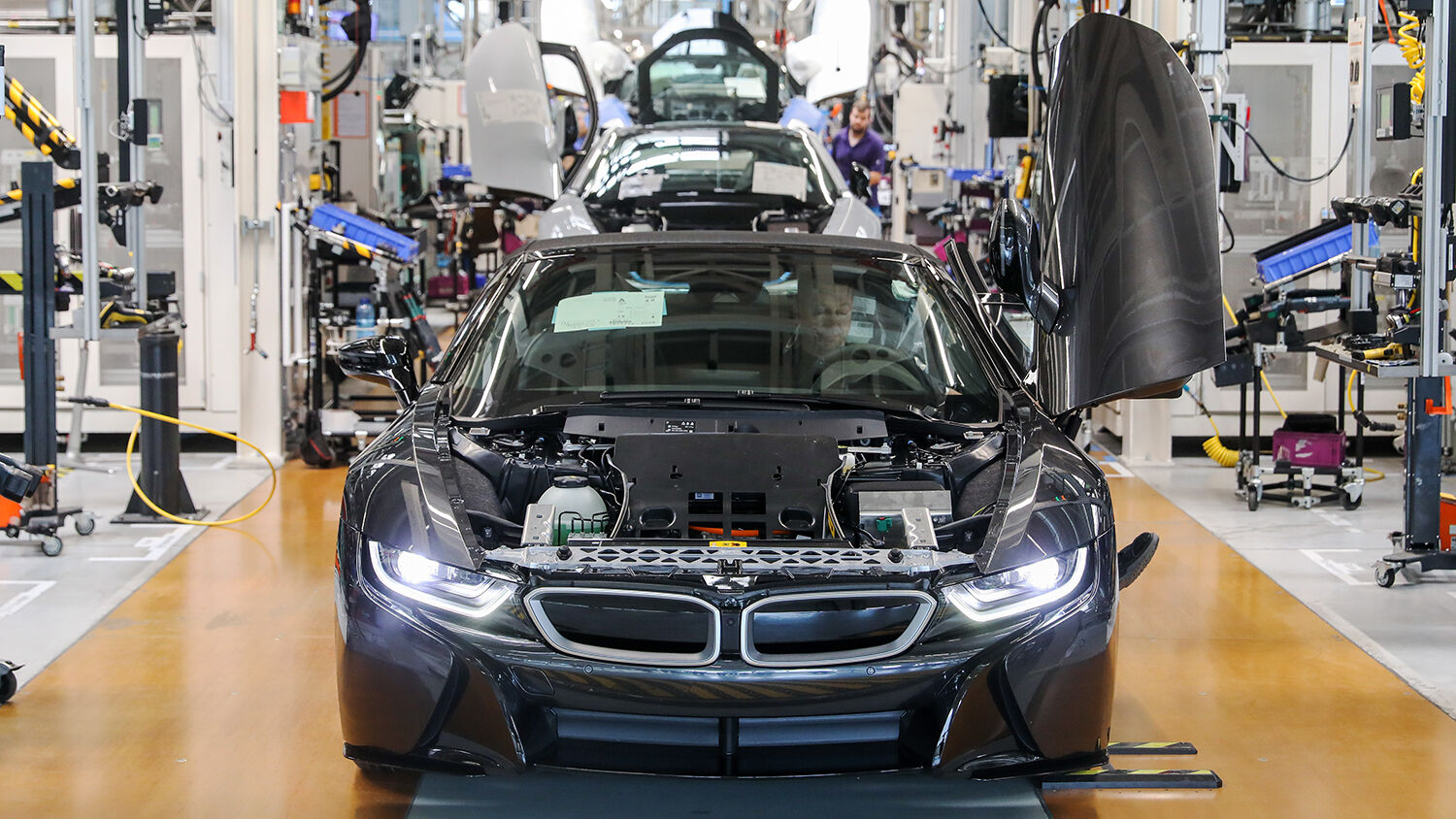 Employees at the bmw plant in Leipzig work on the assembly of the i8 hybrid sports car.
Jan Woitas/Picture Alliance/Getty Images

Recent data shows that German manufacturing output is falling and the nation is heading for a recession. With German politics already in turmoil following the migrant crisis, an economic collapse could easily bring major change to German society.

In June, German exports dropped 8 percent from the same period last year, marking the lowest rate in nearly three years, according to the Federal Statistical Office on August 9. Industrial production dropped 1.5 percent during the second quarter of 2019, far worse than the predicted 0.4 percent drop, according to data published on August 7 by Germany’s Economy Ministry. Compared to the previous year, output was down 5.2 percent, marking the lowest point in almost a decade.

DekaBank analyst Andreas Scheuerle said the data suggests that the German economy shrunk by 0.2 percent over the last quarter. If the economy shrinks in the next quarter, as is expected, the nation will officially be in recession.

“All in all, we would characterize today’s industrial production report as devastating, with no silver lining,” said ing chief economist Carsten Brzeski.

“The most important industrial sector in Germany, the car industry, is in crisis; the same is true for the second-most important, mechanical engineering, and also the third-most important, chemistry,” German newspaper Die Welt wrote on July 12. “Everywhere the German economy is crashing and rumbling. Are these really just isolated cases? Or harbingers of a full-blown crisis that we have allowed to happen?” (Trumpet translation throughout).

Everywhere you look, things look bad for the German economy. Germany is the third-largest exporter in the world, leaving it acutely vulnerable to global trade war. The United States’ trade war with China leaves many European businesses in uncertainty. U.S. President Donald Trump is threatening European powers with tariffs. The aftermath of the euro crisis is still limiting European domestic consumption. Germany is tightly connected to the European financial market, making it vulnerable to financial upsets in poorer eurozone countries. Add to this the likelihood of a hard Brexit, Germany’s diesel scandal, and negative interest rates, and you end up with the “perfect storm” that could flatten Germany’s economic stronghold.

For years, the symbol of Germany’s looming economic crisis has been Deutsche Bank. The nation’s biggest bank has struggled to keep its head above water, but until recently, it has dismissed rumors of a crisis. Last month, however, the bank accepted its fate and began eliminating 18,000 jobs. Rather than seeking to advance the bank’s reach, Deutsche Bank ceo Christian Sewing revealed a more limited approach: “We will only be where our customers want us.”

Germany’s biggest bank is not the only one struggling. Sewing’s statement reveals Germany’s overall need to downsize.

The car industry is also facing major challenges. In 2017, Volkswagen, Daimler AG, bmw, Audi and Porsche all faced billion-dollar penalties in a U.S. lawsuit for pursuing a coordinated strategy of misrepresenting emission results. Effects of the diesel scandal continue to this day. Diesel car owners in Germany have faced driving bans. Car manufactures have to provide costly software updates while the demand plummets for diesel cars.

And this isn’t the only challenge Germany’s biggest industry faces. The car industry is heavily dependent on exports. Its top five export destinations include the U.S., France, China and the United Kingdom. But Donald Trump’s presidency and Brexit make it nearly impossible for the car industry to compensate for its domestic losses with exports. Other German exports are also likely to decline significantly. Since other European nations, such as France and Italy, also face major economic problems, export increases in these nations are unlikely.

The nation’s mechanical engineering sector is also struggling for various reasons. Its main robot manufacturer, Kuka, is majority-owned by the Chinese Midea Group and is heavily affected by the recent trade war between China and the U.S. In the second quarter of this year, its profits were half what they were at the same time last year. As a result, Kuka is reducing its staff in Germany.

The number of employees working part-time in Germany has doubled. This affects Germany’s overall economy. Because of the reduction in work time, employees and their families often have to drastically reduce their standard of living. The uncertainty in the market has led many households to reduce their spending. Unless Germany’s geopolitical struggles change for the better, more and more people will be affected in a downward spiral.

This economic crisis is coming at perhaps the worst possible time. Since the start of the 2015 refugee crisis, Germany has taken in more than a million refugees. Refugee centers and shelters have been established all over the country. But the cost to facilitate their stay increases by the day. Many are seeking stable jobs. Yet even when the economy was stable, the occasional news report highlighted the frustration unemployed Germans feel as jobs are being taken by refugee neighbors. So what will happen as economic conditions worsen and the hunt for employment becomes increasingly more difficult?

Its history under Soviet rule left Eastern Germany more economically disadvantaged than Western Germany. Correspondingly, Eastern Germany has always been the first to experience economic problems. Recent sanctions on Russia have hurt many businesses in the region. The economic challenges, feelings of being disadvantaged, and other trends have led East Germans to drastically different political views than West Germans. Recent polls show that the liberal Green Party is soaring in the West, while Germany’s far-right Alternative für Deutschland (AfD) is soaring in the East.

Germany, the divided country.
Despite the economic success of German reunification, the country remains highly divided politically. In some districts in East Germany, more than half voted for the extreme right AfD or the left Linke. #in

But will West Germans still care about eco-friendly policies once the economic crisis hits their wallets?

If you add the occasional crimes and terror attacks committed by refugees to the fact that they’re taking away many jobs from Germans, you end up with an explosive mixture. The tense climate has led many East Germans to vote for the AfD, a trend that, to a lesser extent, has already happened in Western Germany. As economic conditions worsen, expect social trends between the two sides of Germany to align.

This wouldn’t be the first time that an economic crisis suddenly gave way to the drastic rise of a radical political movement.

Leading up to World War ii, Germany was one of the most liberal countries in the world. Adolf Hitler could have never stirred nationwide hatred for Jews and foreigners if it hadn’t been for the global financial crisis of 1929 that preceded his rise. Only after the crisis hit did millions of people begin to believe Hitler’s propaganda. His accusations that Jews were infiltrating banks gave the people a common scapegoat for their financial trouble. The more they felt the effects of the financial crisis, the more willing they were to support Hitler’s fight against the Versailles Treaty.

But Hitler didn’t use the economic crisis only to create fears; he also used it to create an empire. Large-scale infrastructure programs, as well as increased weapons production, brought the unemployment rate close to zero. This garnered Hitler the love of a hero. Millions would later follow him into a global war.

Is it possible this could happen again?

The idea that this history could repeat itself seems surreal, especially considering Germany’s decades of liberalism and economic prosperity. But the harbingers of another financial crisis are all around us. No one can deny the fact that Germany’s far right is on the rise among those who struggle economically. Imagine how a large-scale economic crisis could spread this trend throughout Germany and Europe.

We are seeing just the beginning of this trend, but Bible prophecy tells us where it will end. For decades, the late theologian Herbert W. Armstrong prophesied that a large-scale financial crisis would again hit Europe. Based on various Bible prophecies and recent history, he predicted that a massive banking crisis in America “could suddenly result in triggering European nations to unite as a new world power, larger than either the Soviet Union or the U.S.” (co-worker letter, July 22, 1984).

Bible prophecy also indicates that crises, such as an economic collapse, will lead to Germany’s demand for yet another strongman. This leader will not be brought to power in a democratic election, but rather “come in peaceably, and obtain the kingdom by flatteries” (Daniel 11:21).

Germany today is a liberal democracy. But a major political and economic crisis could change this rapidly. Watch as Germany’s economic condition worsens, and you will see the Bible’s forecasts fulfilled. Read “How the Global Financial Crisis Will Produce Europe’s 10 Kings,” by Trumpet editor in chief Gerald Flurry, to learn more about how today’s looming financial crisis is prophesied to radically change all of Europe.