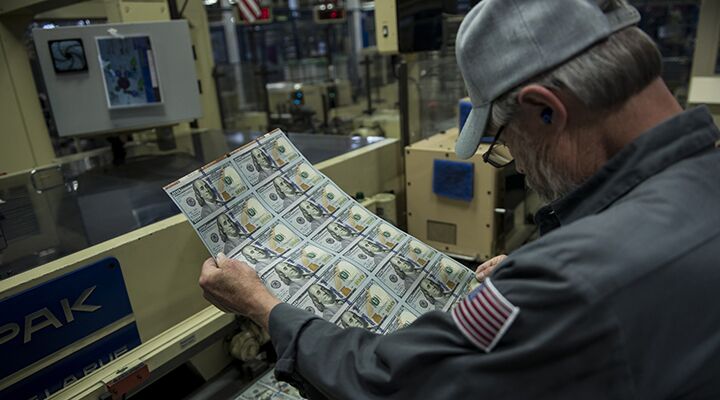 Mr. Armstrong wrote in 1984 that a massive banking crisis in America “could suddenly result in triggering European nations to unite as a new world power, larger than either the Soviet Union or the U.S.” (co-worker letter, July 22, 1984).

When I asked [Fed Chairman Ben] Bernanke what he thought he said: ‘If we do not act immediately, we will not have an economy by Monday.’ … Everyone in the room was flabbergasted.
Nancy Pelosi
“Five years ago … when I was the speaker, I gathered the other Democratic House leaders in my office to discuss the latest financial news.” Nancy Pelosi wrote those words in usa Today, Sept. 17, 2013. She continued: “I told them that, as a matter of course, Treasury Secretary Henry Paulson briefed me on the state of the markets and the financial system, but had not done so that week.

“In that time, Lehman Bros. had filed for bankruptcy; Merrill Lynch had faced failure and had been purchased by Bank of America; and, two days earlier aig had survived only after a Federal Reserve bailout.

“After the meeting at 3 p.m., I placed a call to Secretary Paulson and asked him to come the next morning to brief the leadership. Then came his stunning response: ‘Madam Speaker, tomorrow morning will be too late’” (emphasis mine throughout).

She continued: “We then planned to meet at 5 p.m. that day, and I invited Federal Reserve Chairman Ben Bernanke to join us. Later that evening, the meeting commenced with Democratic and Republican leaders from both the House and Senate.

“Secretary Paulson described a meltdown and financial crisis from the depths of hell.

“When I asked Bernanke what he thought of the secretary’s characterization, he said: ‘If we do not act immediately, we will not have an economy by Monday.’ This was Thursday night. Everyone in the room was flabbergasted.”

In a Sept. 18, 2008, article for Spiegel Online titled “U.S. Financial Crisis: ‘The World as We Know It Is Going Down,’” Marc Pitzke assessed: “[I]t really does look as if the foundations of U.S. capitalism have shattered.” When the foundation of something is shattered, it will never be restored. That is certainly true for our economy.

When the present administration came to power on Jan. 20, 2009, outstanding federal debt was $10.6 trillion. Now, the debt currently stands at $18.1 trillion. President Obama has added an astounding $7.5 trillion during his terms—more than all the debt accumulated by all the presidents from America’s founding to Nov. 23, 2004, right near the end of President George W. Bush’s first term.

The Telegraph called the bis report a “scathing critique of global monetary policy” (June 28). Whether in America or in Europe, financial authorities won’t be able to save the day—because the life preservers have all been used. According to the bis, “In some jurisdictions, monetary policy is already testing its outer limits, to the point of stretching the boundaries of the unthinkable.”

On June 16, the Congressional Budget Office warned that debt threatens to send the U.S. economy into a death spiral.

Revelation 17:12-13 are about a more streamlined Europe, and Greece’s crisis is showing us how it all will happen. These verses say, “And the ten horns which thou sawest are ten kings, which have received no kingdom as yet; but receive power as kings one hour with the beast. These have one mind, and shall give their power and strength unto the beast.”

Precisely the thing that Germans were most uneasy about, and their neighbors, too, has now occurred. Germany dominates Europe to a degree unimaginable even 15 years ago.
Roger Cohen
This is the last head of that Holy Roman Empire, and it will have 10 kings. It won’t have 28 kings—it will have 10, and that is what this financial crisis will trigger and promote powerfully.

The German Question (and German Solution)

In his July 13 article titled “Greece Is Being Treated Like a Hostile Occupied State,” the Telegraph’s Ambrose Evans-Pritchard wrote that the new deal for Greece’s bailout is “the worst of all worlds. They have solved nothing. Germany and its allies have for the first time attempted to eject a country from the euro ….” In other words, it is going to unravel and, as the Bible prophesied, it will lead to those 10 nations.

Can you imagine Germany moving in and controlling your country? Something amazing is happening in Europe, and Germany has power that was supposed to be dispersed among and controlled by all these EU members. They were supposed to control a dangerous Germany, but look at what Germany is doing now.

Reuters quoted one diplomat saying that the austerity measures imposed on Greece are tantamount to turning Greece into a “German protectorate” (July 12).

Herbert W. Armstrong predicted years ago that the collapse of the Western world’s financial system, led by the United States, would unite those 10 nations into what is called the Holy Roman Empire—led by Germany.