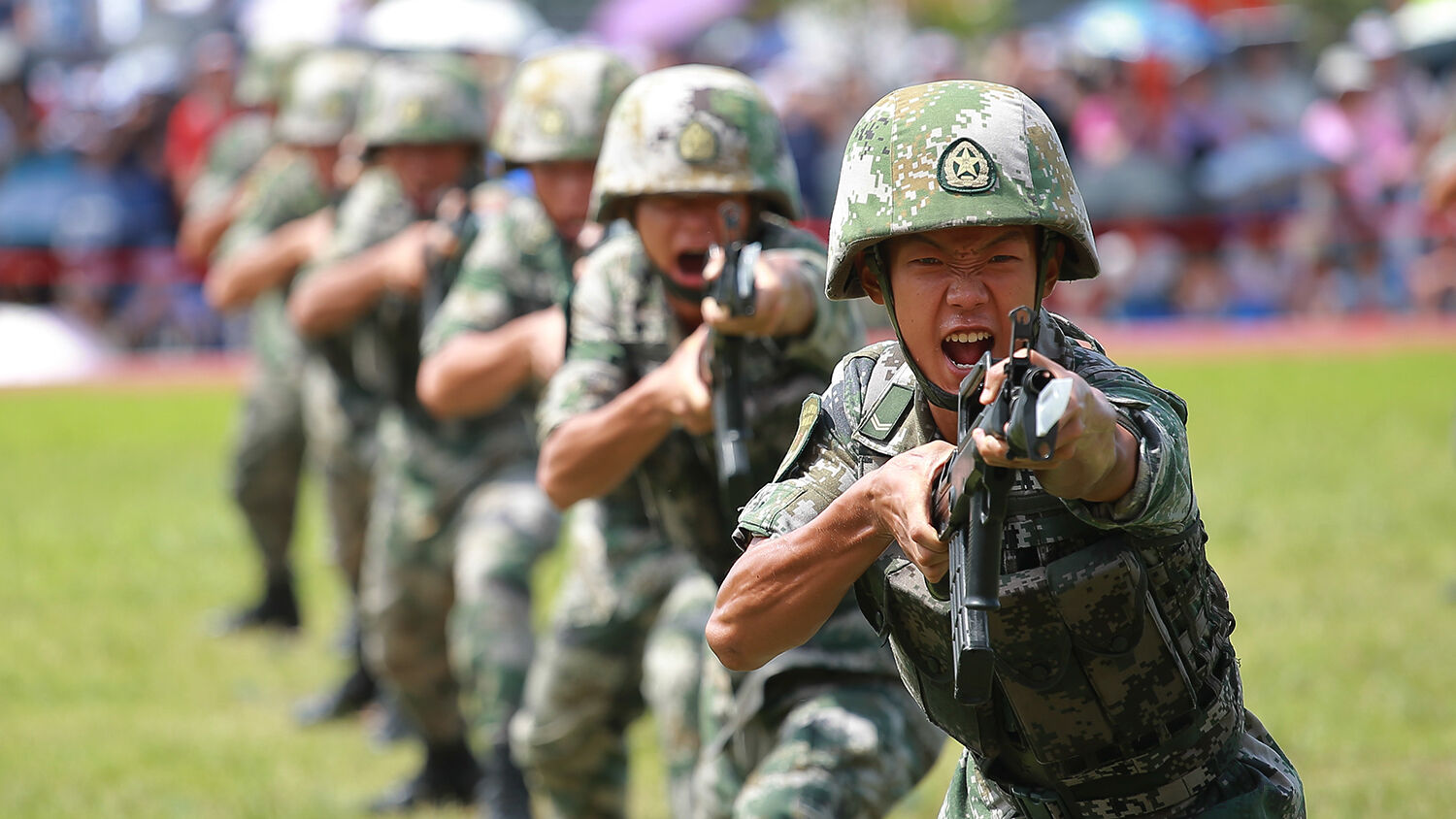 Soldiers of the People’s Liberation Army perform drills during a demonstration at an open day at the pla Ngong Shuen Chau Barracks on June 30 in Hong Kong.
Getty Images

The Chinese have officially denied that the world’s largest infrastructure also has military uses, until now.

After years of China insisting that its Belt and Road Initiative (bri) is purely for peaceful economic purposes, the nation’s top defense official acknowledged on July 8 that the project includes military ambitions.

Speaking in Beijing to defense officials from Latin American, Caribbean and South Pacific countries, Chinese Defense Minister Wei Fenghe said the globe-spanning infrastructure project would build a “framework” for military cooperation between China and other nations.

Chinese news agency Xinhua quoted Wei as saying, “The Chinese military stands ready to deepen mutual trust and consolidate friendship with the militaries of the Caribbean countries and Pacific Island countries.” He added that such cooperation would take place within “the framework of the bri.”

The Belt and Road Initiative is the project and top national priority of Chinese President Xi Jinping. Its stated goal is to rebuild the ancient Silk Road network of routes that facilitated the flow of trade across Asia, the Middle East, Africa and Europe. China is loaning nations in those regions billions of dollars to build ports, roads, rail networks, bridges and energy pipelines. The modern Silk Road also extends into nations in Latin America, the Caribbean and the South Pacific.

Xi Jinping calls the Belt and Road Initiative “the project of the century”. Should the world be worried, or welcome China’s plan? Our cover this week https://t.co/IRjKFhHQJg pic.twitter.com/PbY2tc1OTZ

Despite China’s frequent assertions over the years that the initiative is strictly an economic endeavor with peaceful intent, the project’s military links have long been apparent, particularly in Pakistan and Tajikistan. China seeks a military footing in such foreign locations as part of its efforts to prevent outside powers—namely the United States—from blockading vital choke points in the Chinese periphery. If Chinese soldiers, sailors and pilots are deployed at international bases, it will be better positioned to deter or dismantle such a blockade. These objectives have been part of Chairman Xi’s motivation for prioritizing the project since its unveiling in 2013.

The repeated denials of military objectives were designed to minimize political opposition to the project.

Wei’s public break from the party line in this regard was unexpected. But the Chinese government may have calculated that, when dealing with certain nations, the glow of economic advancement is outshined by that of military might. And indeed, during the July 8 meeting, rather than recoiling from Wei’s offer, Guyana’s army chief, Patrick West, said his nation is eager to deepen military cooperation with China under the initiative’s framework.

Going forward, especially when dealing with countries where anti-American sentiments are deepening, China may continue to dispense with pretenses and advertise the project’s military potential.

The Trumpet closely watches China’s Belt and Road Initiative progress because the project bears significance in Bible prophecy. Isaiah 23 discusses a “mart of nations” that will emerge in modern times as an economic behemoth. Leading the “mart of nations” will be a power Isaiah refers to as Chittim, an ancient name for modern-day China. Also in a lead role will be Tyre, a city that signifies the commercial center of modern Europe.

Isaiah 23 and Ezekiel 27 show that these two economic powers, along with Japan, Russia and others, will together control global commerce for a brief era. Deuteronomy 28:52 makes clear that this trade partnership will form to America’s detriment.

Trumpet editor in chief Gerald Flurry explains the details of this economic “mart” in his free booklet Isaiah’s End-Time Vision:

Instead, it is clear that Asian nations, such as China, will assist the Europeans in carrying out the attack.

Mr. Flurry draws special attention to the Latin American-Caribbean region, mentioning prophecies by the late educator Herbert W. Armstrong about its role in these fast-approaching end-time events. “Herbert Armstrong long prophesied, and we expect, the alliance between Europe and South America to grow extremely strong,” Mr. Flurry writes. Europe already wields significant influence in several Latin American nations. Once China enters a “brief alliance” with the Europeans, the influence it is now building in Guyana and elsewhere in the region will translate into even greater European control over Latin America.

Mr. Flurry shows that the situation will eventually result in a European subjugation of Latin America, saying, “The Latin American countries will become vassal states to Europe!”

With this degree of control in Latin America and the Caribbean, the European and Asian “mart of nations” will be geographically positioned to besiege America. “With a German-led Europe … possessing great maritime power, North America will be surrounded on the east by Europe and the south by Latin America.”

“Should Europe, the resurrected Holy Roman Empire, find a way to take advantage—even for a moment—of key resources and strategic holdings of China, Russia and Japan, it would have more than enough power to besiege the Anglo-Saxon nations ….”

The significance of China’s Belt and Road Initiative—including the project’s suddenly open military ambitions—is revealed in these Bible prophecies.

China’s increasing military power points to dark times ahead for the U.S. and some of its allies. But the dark future will be immediately followed by the brightest age in mankind’s history. Mr. Flurry writes: “[W]hat a dynamic market of nations it is. All of them are going to besiege America, Britain and the Jewish nation. … But that trading partnership won’t last long. Soon they will clash, just before Jesus Christ returns and destroys both of them” (ibid).

To understand more about the rise of China and how it connects to Christ’s return, order your free copy of Mr. Flurry’s booklet Isaiah’s End-Time Vision.