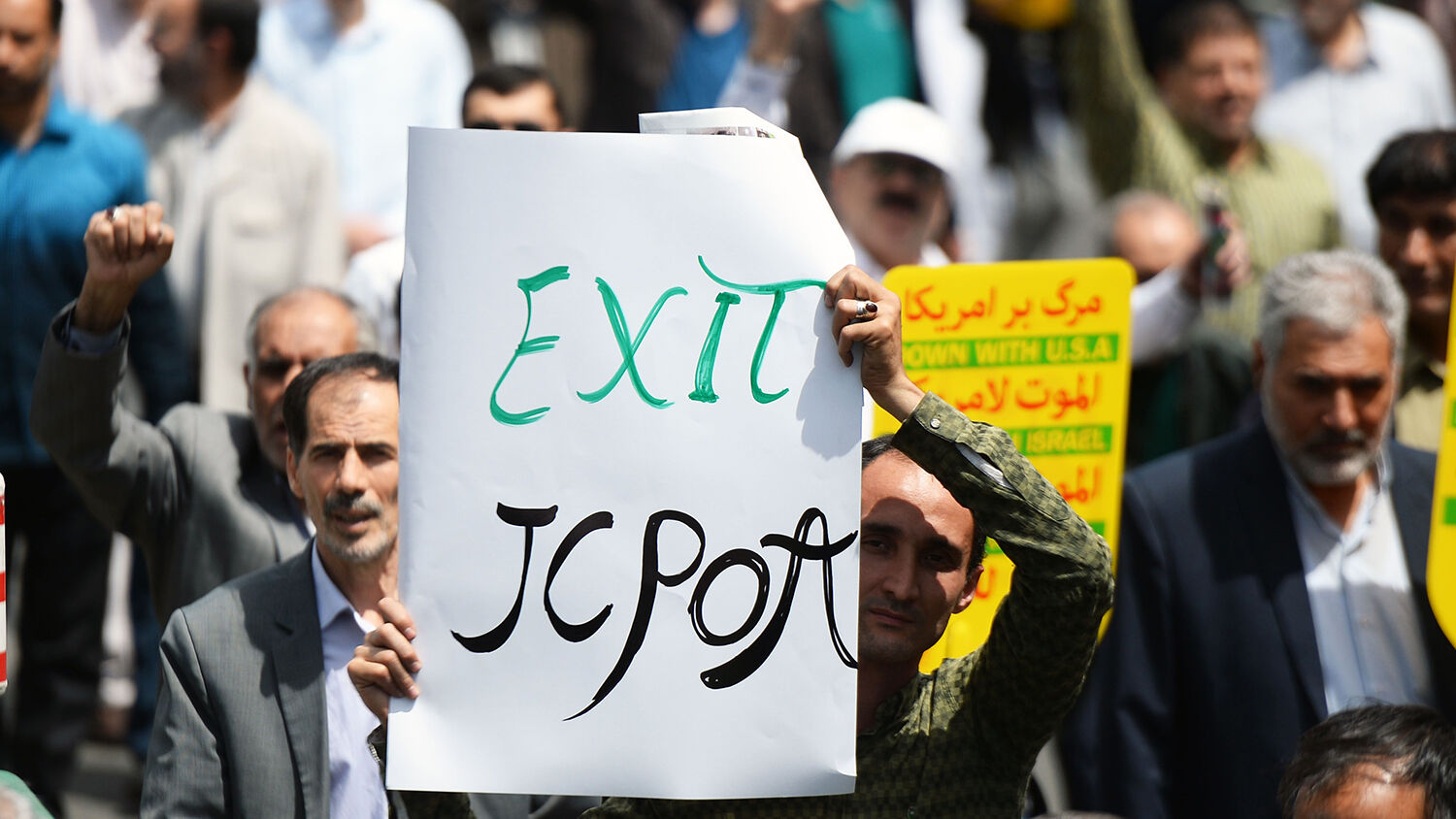 Iranians demonstrate in Tehran on May 10 to support the government’s decision to pull out from the nuclear deal.
Getty Images

Iran has officially broken the terms of the 2015 Joint Comprehensive Plan of Action. According to Iran’s Fars News Agency, Iran’s uranium stockpile was measured on Monday and exceeded the 660-pound limit outlined in the nuclear deal. This belligerent move puts Iran back on the path toward developing a nuclear bomb.

According to the Wall Street Journal, an Iranian official told reporters that Iran may also leave the Non-Proliferation Treaty. Doing so could cast off any remaining restrictions and openly assert that the nation’s nuclear program is intended for weaponization. Speaking at the Arak Heavy Water Reactor Facility, Behrouz Kamalvandi, spokesman of the Atomic Energy Organization of Iran, confirmed that Iran has already quadrupled its production of low-enriched uranium.

Now that Iran has followed through on its first threat to break the nuclear agreement, another crucial deadline is quickly approaching. Iran gave Europe until July 7 to find a way to shield it from United States sanctions. If it does not, Iran has said it will leave the Joint Comprehensive Plan of Action and increase uranium enrichment to potentially dangerous levels. Jumping from the prescribed 3.67 percent uranium to 20 percent enrichment, as it has said it will do, requires dropping 22 non-radioactive atoms of uranium for every radioactive atom of uranium. Jumping from 20 percent to 90 percent requires dropping only four additional non-radioactive atoms for every radioactive atom. If Iran leaves the nuclear agreement, then the jump to producing weapons-grade 90 percent uranium could be achieved in a matter of months.

European leaders are wary of Iran’s breakout potential. Iranian Deputy Foreign Minister Abbas Araqchi said on June 25 that “there remains no reason for the implementation of Iran’s one-way commitments” to the agreement. French President Emmanuel Macron responded on June 27 warning Iran not to break the terms of the Joint Comprehensive Plan of Action but rather to join discussions to ease tensions with the U.S.

The European Union (EU) on Wednesday firmly supported the Joint Comprehensive Plan of Action (JCPOA), commonly known at the Iran nuclear deal, regretted over US withdrawal from the deal and asked Iran to implement the agreement. https://t.co/MvuCixpbW6 pic.twitter.com/qJym1LJOqi

Iran hid its nuclear program for 18 years before it was first revealed in 2002. It concealed its actions through the use of several front companies. Prior to 2002, Iran used private firms as camouflage for acquiring expertise, conducting research and purchasing equipment and material required to build a nuclear weapons program.

“This allowed the regime to buy nuclear-related materials from a number of foreign countries under the cover of benign civil purchases,” Alireza Jafarzadeh writes in The Iran Threat. Many nations justified these sales simply “because they were written up as sales to nonmilitary and nongovernmental entities.” Iran’s network of front companies made a spider’s web look simple and allowed it to hide what it was doing to partially avoid suspicion.

When the program was finally exposed, Iran quickly put it under the control of the Islamic Revolutionary Guard Corps and literally moved it underground. Iran is one of the most mountainous countries in the world—50 percent of the country is covered by mountains and burying its facilities under them has made the nuclear program practically untraceable.

However, the dedication of an Iranian dissident group led to a discovery that turned the tide.

In a second revelation on March 24, 2005, Jafarzadeh made an announcement to the International Atomic Energy Agency in Washington, D.C. His contacts in Iran had discovered illegal operations at the Parchin Military Complex, 19 miles southeast of Tehran. According to the report, which was later confirmed, the Iranian Ministry of Defense had secretly built an underground nuclear development facility. In late 2005, proof in the form of satellite imagery and firsthand accounts emerged that nuclear operations at the facility were underway. The Parchin facility was being used for explosive testing, the development of a nuclear core, and the production of a nuclear warhead.

Not far from the Parchin facility, Iran’s Hemmat Industries Group manufactures Shahab-3 and Ghadar ballistic missiles—both of which are capable of carrying nuclear warheads.

In response to this revelation, the U.S. hit Iran with major sanctions and forced it to the negotiation table.

Signed by Britain, China, France, Germany, Iran, Russia and the United States in 2015 and implemented on Jan. 16, 2016, the Joint Comprehensive Plan of Action was designed to restrain Iran’s nuclear development.

In May 2018, U.S. President Donald Trump withdrew from the Joint Comprehensive Plan of Action and began reimposing sanctions against Iran, including its vital banking, oil and shipping sectors. After a year of sanctions, Iran’s crude oil exports have plummeted from 2.5 million barrels per day to only 400,000 barrels per day, which accounts for about 72 percent of its total trade exports.

When President Trump withdrew from the agreement, the European signatories assured Iran they would provide relief from U.S. sanctions. However, the long-promised relief has not come, and Iran wants out.

Bible prophecy indicates that Iran could develop the nuclear bomb. Daniel 11:40 says: “And at the time of the end shall the king of the south push at him: and the king of the north shall come against him like a whirlwind.” Notice, these events occur “at the time of the end,” just before the Second Coming of Jesus Christ. This is not history—it is prophecy yet to be fulfilled.

Trumpet editor in chief Gerald Flurry has identified radical Islamic extremism, led by Iran, as the king of the south. He explains in his free booklet The King of the South, through geography, history and prophecy, why Iran will lead this end-time power. (Request your free copy here.)

This radical nation is prophesied to push at the king of the north—a 10-nation European empire led by Germany. The ultimate form of this push is Iran’s relentless ambition to develop a nuclear bomb. Combined with its majority Twelver Shiism belief that in order for their Messiah to return, they must first cause world chaos, Iran’s nuclear ambitions threaten humanity’s very existence.

Several biblical passages indicate that nuclear war is coming. Isaiah 1:7 says the nations will become “desolate” and the cities will be “burned with fire.” Not even modern Israel will escape this warfare. (Request your free copy of The United States and Britain in Prophecy, by Herbert W. Armstrong, to understand the modern identity of ancient Israel.) Ezekiel 5:4 says, “[T]hereof shall a fire come forth into all the house of Israel.”

The book of Joel says the nuclear fallout will become so bad that “the sun and the moon shall be dark, and the stars shall withdraw their shining” (Joel 2:10). This horrific war is part of “the great and terrible day of the Lord” (verse 31). “A fire devoureth before them; and behind them a flame burneth: the land is as the garden of Eden before them, and behind them a desolate wilderness; yea, and nothing shall escape them” (verse 3).

If mankind was left to himself, “there should no flesh be saved” (Matthew 24:22). Thankfully, there is hope.

God promised “unto the house of Israel, Seek ye me, and ye shall live” (Amos 5:4). After a devastating war, the end-time nations of Israel will return to God for deliverance and Jesus Christ will come to “defend the inhabitants of Jerusalem” (Zechariah 12:8).

When He comes, He will establish an everlasting kingdom of peace and prosperity (Daniel 2:44-45; Isaiah 9:6-7). Iran’s brutal, tyrannical regime will be crushed, and Israel will finally live in peace. Zechariah 14:11 says, as a result, “there shall be no more utter destruction; but Jerusalem shall be safely inhabited.”