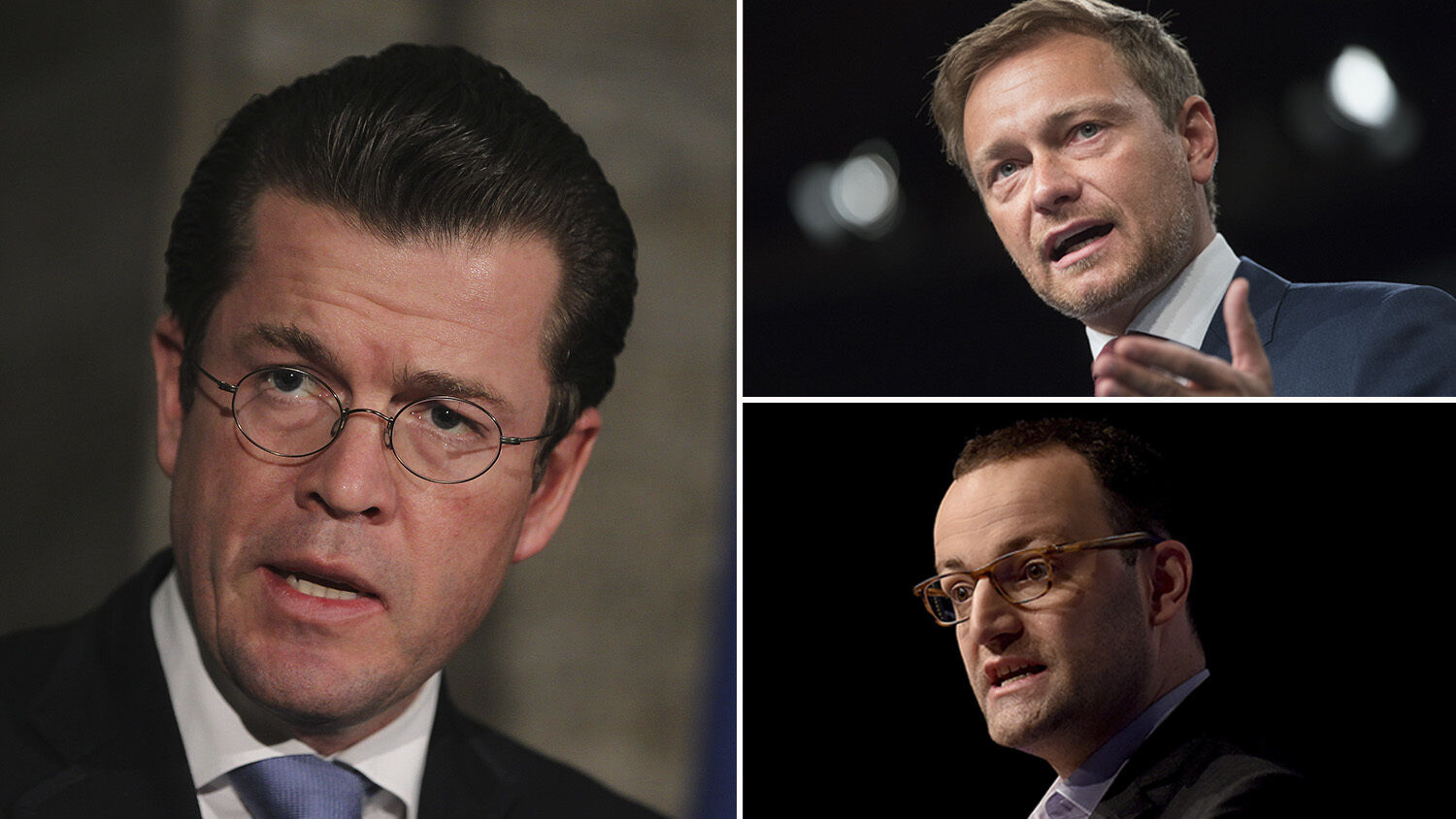 In the twilight of the Merkel era, a bold new Germany emerges.

Christian Lindner, Jens Spahn and Karl-Theodor zu Guttenberg are names that you need to be familiar with. They come up again and again in German politics. These names may become even more significant in the very near future. Although none of these men currently hold a major government office, they are viewed by many Germans as the future leaders of the nation.

These men are decisive, revolutionary, power-driven, bold and self-confident. They symbolize the very opposite of current German Chancellor Angela Merkel.

Germany today has a leadership vacuum. Many fear that if Merkel resigns no one could fill the void she will leave behind. But with the end of the Merkel era appearing imminent, what seems to be a dead-end for German politics is really the opening for a radical German political shift.

The Christian Democratic Union (cdu), the Christian Social Union (csu) and the Social Democratic Party (spd)—traditionally Germany’s main “people’s parties”—suffered a historic setback in the September election. The results show that German voters are dissatisfied with the way things are going in their country. They are tired of the current government, tired of hearing the same talk, tired of seeing the same characters leading their land into confusion.

A month after the German elections, Austria showed what Germany is lacking: bold leadership.

Newly elected Austrian leader Sebastian Kurz succeeded where German politicians have failed. He entered the political arena when Austrians were dissatisfied with the way things were going in their country. Austria was being overwhelmed with refugees, and Austrians sought refuge in right-wing parties.

Kurz turned this massive problem into an opportunity. Instead of focusing on the problem, he turned Austria’s attention to himself as the solution. Full of self-confidence, he gave his party an ultimatum: Either accept him as party leader with almost authoritarian rights or go leaderless into the elections. The party members gave in without a fight. Kurz then approached the Austrian people boldly, without trying to be politically correct. He spoke what he saw as the truth. He swayed the polls in his favor with his charisma.

Kurz didn’t lead only his party to victory. Since his election, Austria itself has risen in significance. Kurz has proved that one man can change the fate of an entire nation.

While Germany flounders without a strong leader, Kurz has secured indisputable control of Austria and made a big splash on the world scene in the process. But Austria is only a minor player when compared to the powerhouse of Germany. Imagine what such leadership could do for a country like Germany—a nation that could unite all of Europe under its command.

For a nation to be powerful, it must have a strong leader. A great leader can raise up a struggling nation to international glory. This is the kind of leader that the German people are looking for today.

Germany is a special case. Not only does Germany’s leadership determine the course of the nation, it also determines the course of all of Europe. Over the last 12 years, the European political climate has been directed by Chancellor Merkel’s slow-moving, carefully calculated, risk-averse political style. In the last two months since the German election, Europe has been on hold, hoping that something will change.

Germany is an untapped powerhouse. With the right leaders, it could change the course of all of Europe and even of the entire world. If we look at Germany’s next generation of leaders, we can see the future of both Germany and Europe.

Merkel underestimated the power and confidence of the next generation of German leaders when heading into the recent coalition negotiations. She hoped that her party, the cdu, would be able to compromise with the Green Party and the fdp and form a coalition—if not easily, at least quickly. She was caught off guard when Christian Lindner, the party chief of the fdp, declared that the coalition talks had failed.

The fdp has learned from bitter experience that its voters don’t like it when it compromises with Merkel. From 2009 to 2013, the fdp governed together with Merkel’s party, compromising to form a coalition with the chancellor. However, voters made their disapproval known in the 2013 election when the party failed to reach the 5 percent mark and almost died out completely. The fdp probably would have faded away altogether if it hadn’t been for 38-year-old Christian Lindner. Much like Sebastian Kurz, Lindner transformed his party into a one-man show and led the party to great success.

Merkel thought that the fdp would compromise again to form a coalition. She probably thought that political-newborn Lindner would lack the guts to let something as important as the formation of a coalition fail for the sake of his party.

“Christian Lindner ends … the fdp’s history as pushover party,” Wolfram Weimer wrote for n-tv (Trumpet translation throughout). Spiegel Online commented that although the fdp has been sharply criticized for breaking off the Jamaica coalition negotiations, it is the winner in the spon election trend. This online survey showed a 3 percent increase in votes for the fdp, while the cdu under Merkel fell below 30 percent.

In his short career, Lindner has already contributed to a historic event in Germany: busting Merkel’s coalition illusion. This may be one of his first major contributions to forming a new Germany.

Lindner is a close friend to another new political hopeful in Germany: Jens Spahn. Not only do the two men get along in their private lives, they also agree politically on many issues, such as their criticism of Merkel’s refugee policy.

When talking about the post-Merkel era in Germany, you can hardly avoid talking about Jens Spahn. While Lindner holds Angela Merkel responsible for the failure of the fdp in 2013, 37-year-old Jens Spahn accuses her of ruining the cdu today. Although he is Catholic, conservative and homosexual, Spahn is most widely known for his aggressiveness in defending the core beliefs of the cdu/csu.

Spahn currently works as the parliamentary secretary of the Federal Finance Ministry. Until recently, his boss was Wolfgang Schäuble, a man Spahn views as a mentor. Schäuble also holds Spahn in high esteem. Even before the recent election, Spahn’s former boss suggested him as an alternative to Merkel. Under Schäuble’s protective umbrella, Merkel-critical Spahn has risen as the leader of the conservatives in the cdu. Since Schäuble is now the president of the German parliament, Spahn is seen as their go-to financial expert.

Many view Spahn as one of Merkel’s greatest challengers. In this, he follows in the footsteps of his mentor Schäuble. As finance minster, Schäuble had the power to overthrow Merkel, but he chose to remain loyal—at least, at the time.

Spahn has vocally criticized Merkel’s refugee policy, calling the German refugee crisis “a kind of state failure,” and has received much attention for his stance from the conservatives in his party. Last April, he made international headlines by proposing an “Islam law” that would establish stricter regulations on what is taught in German mosques. He also mobilized a majority to oppose the dual citizenship of Turkish people living in Germany, saying that they have to decide which country they are loyal to.

On the issue of immigration, Spahn’s proposals align closely with those of Austrian Chancellor-elect Sebastian Kurz. The two are seen as close allies. The connection between them is so obvious that Spiegel asked Kurz if he would like to see Spahn become Germany’s next chancellor.

Nothing is out of reach for politicians like Spahn, according to Edmund Stoiber. Even Karl-Theodor zu Guttenberg has said that he thinks this younger generation will provide great leadership for the cdu/csu in the future. Guttenberg said at a roundtable discussion last September, “I think Jens Spahn is an exciting character that will not end due to shyness.”

It has been more than six years since the former defense minister resigned from politics, but the media still hangs on to 45-year-old Guttenberg’s every word.

All eyes were zeroed in on Guttenberg when he filled the beer tents in Germany this fall, delivering campaign speeches for the csu. After the disappointing election results, almost all major news outlets analyzed Guttenberg’s reaction, hoping to find direction. Not only is Guttenberg Germany’s media magnet, he is also the most likely man to lead Germany in the future. As theTrumpet.com managing editor Brad Macdonald wrote in his September 20 Trumpet Brief:

This man could be the ideal antidote to the rise of the AfD [Alternative für Deutschland]. Guttenberg has a lot to say about the migrant crisis, about Islam and about Germany’s Christian heritage. He too believes some migrants need to be tossed out, and he believes Islam’s presence needs to be curtailed. He also believes that Germans need to “stand up for their culture.” His speeches nearly always have a distinct nationalist tone.

Yet while Guttenberg communicates intelligently, forcefully and patriotically about these issues, he isn’t too extreme. He doesn’t make overtly racist remarks. He’s not unreasonable, and he doesn’t condone extreme solutions. He doesn’t look or sound like a Nazi.

For Germans who are anxious and frustrated, yet who don’t want to go so far as to vote for the AfD—or for AfD supporters uncomfortable with the extreme views of the party—Karl-Theodor zu Guttenberg is an attractive alternative.

Jens Spahn and Christian Lindner are still rather inexperienced on the geopolitical level. Guttenberg, on the other hand, has the experience and qualifications that it takes to be the leader of Germany in a time of political chaos. (To learn more about Guttenberg’s qualifications, read Brad Macdonald’s article “Trump, Germany and KT zu Guttenberg.”)

Guttenberg, Spahn and Linder are some of Germany’s rising stars, the leaders that Germany may turn to for a new political direction. As Trumpet editor in chief Gerald Flurry wrote last October, we are experiencing a turning point in German politics. New leadership is about to spring up in Germany and Europe.

While the current German political elite is crumbling, a completely new Germany is emerging from the rubble.

Bible prophecy forecasts that Germany will be led by exactly the kind of politician we now see rising to the top. Several scriptures, including Daniel 8:23, talk about a “king” that will rise up and lead this modern European power. Mr. Flurry wrote in his free booklet A Strong German Leader Is Imminent:

In the rise of these strong, charismatic leaders, we can see that people all across Europe are yearning for a king-like leader. For more on what the Bible says is coming soon to Germany, read Mr. Flurry’s free booklet A Strong German Leader Is Imminent.