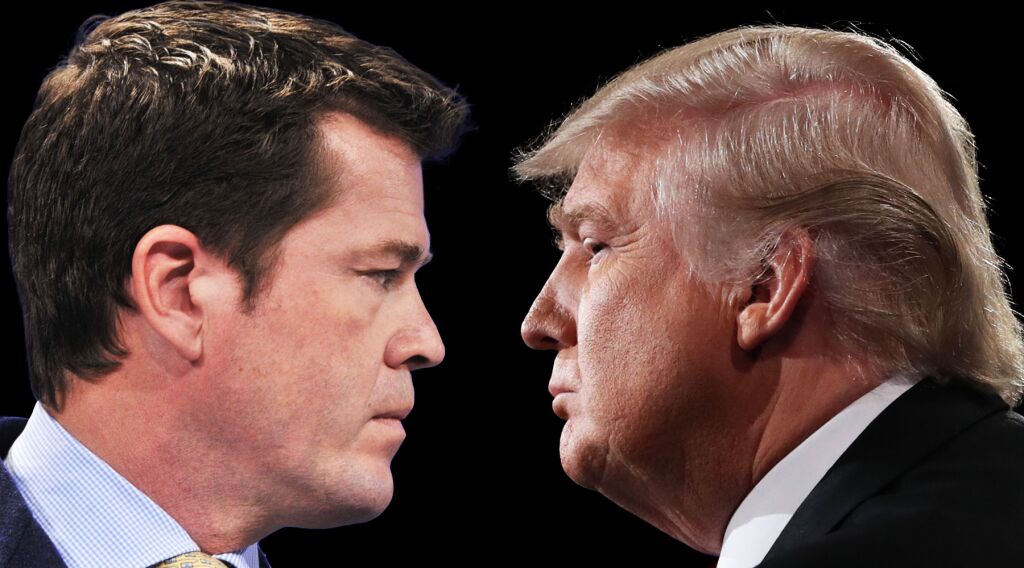 Karl-Theodor zu Guttenberg might be just the man to lead Germany and Europe in the Donald Trump era.

Who is Donald J. Trump, and how will his presidency affect my nation? This question dominates the minds of world leaders and statesmen right now. And no country is thinking about this more than Germany.

Perhaps the most valuable asset in Berlin these days, and in every capital city the world over, is an informed understanding of United States President Donald Trump and his true intentions. Germany’s leaders are deeply concerned and wondering: Is Trump serious about imposing tariffs on German imports into America? Does he really dislike the European Union and seek its disintegration? How deep is his affection for Russian President Vladimir Putin, and how much will he empower the Kremlin? Does Mr. Trump really consider nato “obsolete” and plan to initiate a United States retreat from Europe?

For Germany and Europe, these are existential issues. Each issue underpins the post-World War ii international system. This world order isn’t exactly perfect, and there’s nothing wrong with reconsidering these pillar issues. But overhauling 70 years of international relations must be done cautiously, thoughtfully and in partnership with allies. One misstep and the international order crumbles.

Although Mr. Trump’s views on Russia, the EU, nato and Germany are radically different from America’s traditional views on these issues, it’s impossible to say for certain that his views lack sufficient consideration. Still, there’s a problem: President Trump is talking about fundamentally transforming Europe, the German-U.S. relationship, nato and the Russian-European relationship—in more dramatic terms, Mr. Trump is talking aboutblowing up the postwar world order—without explanation, without discussion and without reservation.

On January 20, as millions of Americans reveled in Donald Trump’s “America first” inaugural speech, here’s what the Germans and Europeans were thinking.

Handelsblatt reported in “Trump Team Leaves Germany Out in the Cold”:

As Donald Trump officially enters office, the German government is still struggling to establish contacts with the new administration and distinguish campaign bluster from actual policy. The current changing of the guard in the United States … has left the German government uncertain about the future course of transatlantic relations. … Ms. Merkel has never met and knows very little about the unorthodox man being sworn in as the 45th president on Friday, other than the fact that he views her refugee policy as a “catastrophic mistake.”

The inauguration of Donald Trump heralds the arrival of a new world order. The West is weaker than ever before, and rising American nationalism poses a threat both to Germany’s economy and the European Union.

For more than 60 years, the U.S. has promoted European unity. The country introduced the Marshall Plan, it supported the single European market, and backed Europe’s eastward expansion following the collapse of the Iron Curtain. But now, a man is entering the White House who is counting on the disintegration of the EU.

Spiegel Online lamented President Trump’s flagrant disregard of history, strategic thinking, America’s postwar role in the world, and the relationships and alliances that have defined international relations for seven decades.

The new president feels absolutely no sentimentality when it comes to the alliances that arose out of the rubble of World War ii. Like no other president before him, he is prepared to call them into question and even, apparently, to bring them to an end. Plus, Trump has no taboos. On the contrary: He loves to break them; he loves to provoke.The result is that Europe finds itself on the eve of an epochal shift of the kind it hasn’t seen since the fall of the Berlin Wall and the collapse of the Eastern bloc. Is this the end of the West as we know it, as former German Foreign Minister Joschka Fischer warned a month ago?

The situation could hardly be worse for German Chancellor Angela Merkel. Soon, the EU will be forced to make do without the United Kingdom, the bloc’s second-largest economy; right-wing populists are on the advance in Europe; and now Trump is at the helm in the U.S., a man who said in his interview this week that the German chancellor had “made a catastrophic mistake.” It would be difficult to formulate a challenge more directly than that.Can Merkel’s Europe now hold together? Can she become a worthy adversary to Trump in the approaching conflicts over trade regulations, international agreements and the liberal legal and economic order that has been so important to the United States for the last six decades?

That’s a breathtaking remark. The website for Germany’s most influential newsmagazine referred to Donald Trump as an “adversary” of Chancellor Merkel and Germany. Is Germany beginning to consider itself to be at war with Donald Trump and America? Think about the ramifications of such a belief.

That which had seemed inconceivable just a short time ago now appears to be a foregone conclusion: A new era is beginning, one in which the certainties that have held true for decades are suddenly no longer valued. They are suddenly vulnerable. For the most part, that is because the 45th president of the United States of America is simply not interested in the world order that has developed since 1945. He is just as disinterested in the transatlantic partnership and the long-cultivated alliances with Western allies.

It’s entirely possible this view is distorted and that America’s president isn’t nearly as hostile to Germany as this article implies. But the truth doesn’t prevail in this instance, perception does. And the very real perception in Germany is that America is becoming a competitor and enemy. Germany and Europe are feeling increasingly anxious and threatened.

“So what?” the patriot American might respond. “Americans should care less about what Germany and Europe think and care more about American interests.” There’s merit to that sentiment, but it isn’t that simple. To this person, history responds resoundingly: We should always care what Germany is thinking and planning!

Spiegel Online carried its drama right through to the conclusion.

Trump is the end of the world as we know it—that much is clear. Or, as the Economist recently wrote: “Things could get much worse.”

Now they apparently have to worry about a hostile America!

Europe’s most pressing problem is its leadership crisis. European leaders, including Angela Merkel, are proving to be absolutely incapable of solving these issues. Germany and Europe need someone who understands President Trump. Someone who understands what motivates Mr. Trump and his team. Someone who understands 21st-century America and the populist, nationalist spirit coursing through its veins. Someone capable of piloting Germany through the historic transformation already underway. Someone, ideally, with an established relationship with key American thinkers and leaders, and perhaps even Mr. Trump’s team. Someone bold enough—but also wise and pragmatic enough—to confront President Trump.

Does such an individual exist? Perhaps.

Karl-Theodor zu Guttenberg, as we have reported for more than six years, has an impressive résumé, and one that looks more impressive over time. Guttenberg, a former German defense minister, was once the most popular politician in Germany. There was a time many believed he would replace Merkel as chancellor. This man has the political heritage and education, the character and spirit, and the diplomatic experience and connections to manage the Trump presidency. Guttenberg understands German and European politics and has established relations with some of the highest figures in Germany, Europe and Russia.

Guttenberg’s political career seemed to end in 2011, when it was revealed he had plagiarized his doctoral thesis (a peccadillo, it seems, that isn’t exactly rare in Germany). As penance, Guttenberg retired from politics and banished himself to America. In Connecticut, he established a boutique financial consultancy and became a commentator, providing insightful, refreshingly candid analysis on serious world issues. Guttenberg belongs to the realist school of international relations. He sees the world and human nature as it is, not as utopianists want it to be. He understands power and the struggle for power. Perhaps you’ve seen him on cnn, Fox, cbs or read his articles in Time or the Wall Street Journal.

Consider his stance on Vladimir Putin. Unlike Mr. Trump, Guttenberg sees Russia’s president as sinister, evil and dangerous. He is undoubtedly alarmed by Donald Trump’s affection for Putin and probably has some clear ideas about how Germany and Europe should handle a potential U.S.-Russia rapprochement. Such thinking looks good on his résumé.

In hindsight, Guttenberg’s benching from German politics seems more a blessing than a curse. He escaped the minefield that is German and European politics and spent four years equipping himself with the knowledge and experience to lead Germany through a Trump presidency. He also cultivated connections and relationships with some powerful and influential figures in America. One of his colleagues was Rex Tillerson, America’s new secretary of state; they worked together at the Center for Strategic and International Studies. Guttenberg also knows James Mattis, America’s new secretary of defense. Guttenberg has spent the last four years studying America’s politics and culture. He doesn’t just understand Washington, he understands America.

It’s a unique and pretty incredible résumé: KT zu Guttenberg understands the historic and strategic underpinnings of both American and European foreign policy. He understands and knows how to navigate German, European and American politics. He has access to the most influential thinkers and leaders in Germany, Europe and America. He speaks flawless German and English. And he has the personality and leadership necessary for the uncertain, tense times ahead.

If Germany really is beginning to see America as the “adversary,” then it needs a leader who understands the enemy. Who better than a former defense minister who spent the last four years living with the enemy?

Finally, Guttenberg appears to have a “handle” on Donald Trump. He’s been dissecting Trump speeches and appearances for months, and he hasn’t held back his criticism. But it’s not just blustery character assassination. Guttenberg understands President Trump’s worldview and intentions and how they stand to impact Germany and Europe. He also has a vision of how Germany and Europe must react. In one recent article, he explained that Berlin must respond to the Trump presidency by ending its “passive, wait-and-see” approach to foreign relations, and develop a “culture of responsibility.” He also stated that Berlin must respond with “language that Trump understands,” language and gestures that are “clear, constructive and, if necessary, hard.”

Such rhetoric will be music to the ears for many Germans and Europeans.

Considering all this, it’s no surprise that Germany today is buzzing with rumors of an imminent Guttenberg comeback. Earlier this week, he enjoyed a two-hour meal at one of Munich’s most posh restaurants with Andreas Scheuer, a key leader of the Christian Social Union (csu), Guttenberg’s political party. He’s also been seen repeatedly in recent months in Berlin and Munich. Germany’s media has been anticipating a comeback for almost two years. His csu colleagues, and even some from other parties, are virtually begging him to return to German politics.

KT’s response to all the speculation and anticipation is brilliant. He usually smiles, delivers a self-deprecating remark, and says it’s not going to happen. “It’s as unlikely as me breeding giraffes in my cellar,” he stated in one interview. Such a coy response, of course, only intensifies his supporters’ longing for his return.

In my view, Guttenberg might simply be waiting for the right moment. He wants to arrive on the scene just as Germany and Europe’s woes and anxieties become acute, almost unbearable. Guttenberg knows that if he appears at the apex of a massive crisis, with his impressive résumé—which is nearly perfect for this moment—then his past will be forgotten and Germany (and Europe) will be his. Of course, it could happen differently.

Whatever happens, though, this man seems to be uniquely prepared to lead Germany and Europe through the tumultuous Donald Trump era. We’ve said it before—we began saying it six years ago—but it’s worth repeating: Watch Guttenberg closely.