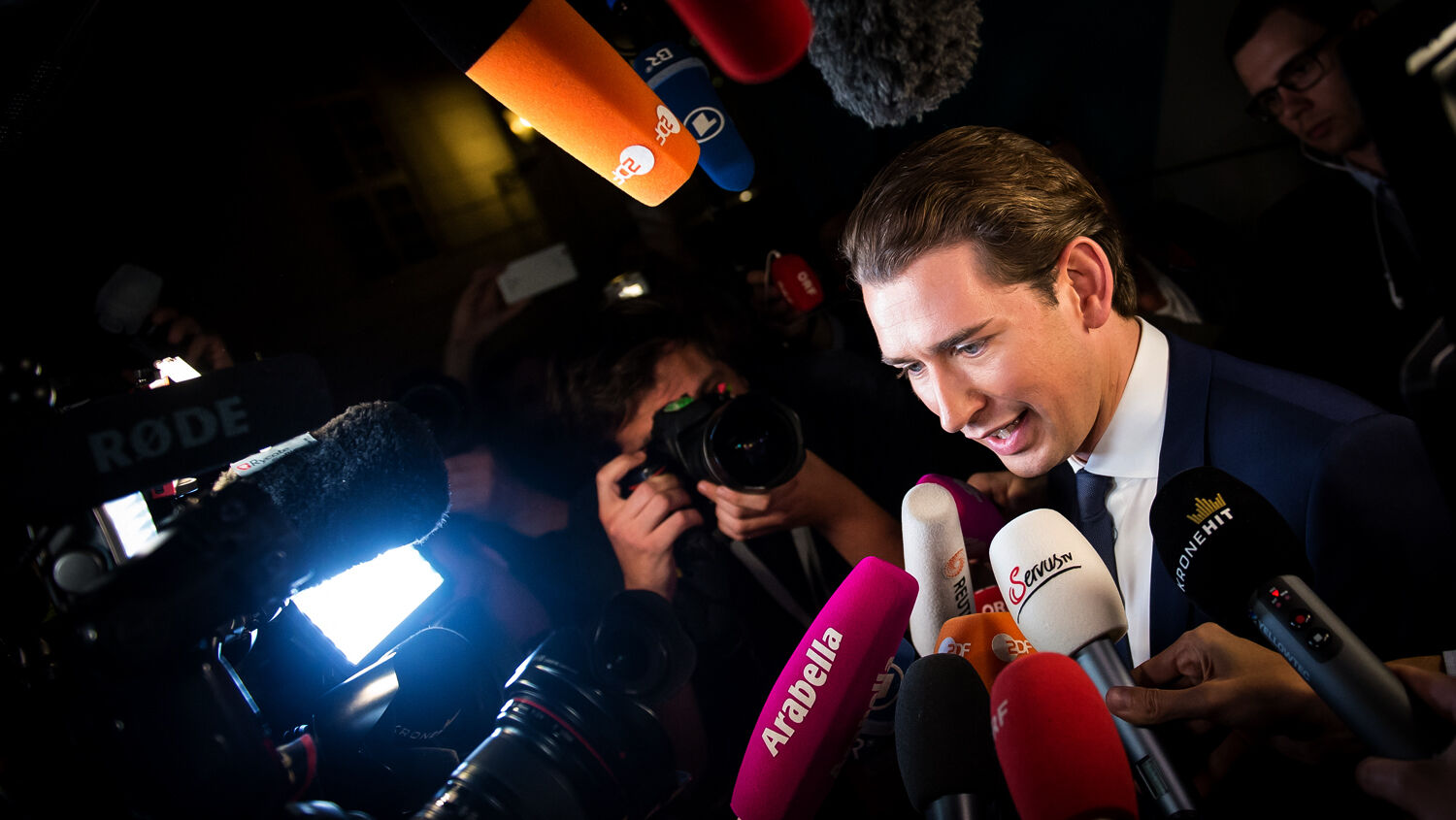 Sebastian Kurz was only 27 when he became Austria’s foreign minister, and he’ll be 31 when he becomes Austria’s chancellor. He has been called the “shooting star” of European politics, and is being greeted “like a king” all around Europe. What does Kurz’s election tell us about Austria, and about Europe in general?

Austria’s October 15th election provided further proof of the far-right’s growing presence in Europe. It was also proof that Europeans seek change, especially when it comes to immigration. Austria’s election also showed that more and more Europeans are willing to embrace unconventional leaders. Sebastian Kurz is not a normal politician, and the manner in which he is taking control of Austria shows that these are not normal times.

At the beginning of this year, no elections were scheduled for this October. The Social Democratic Party of Austria (spö) was leading the nation in a grand coalition with the Austrian People’s Party (övp). Christian Kern was Austria’s chancellor and Reinhold Mitterlehner was the leader of the övp. At the time Kurz was only a junior member of the övp, and was Austria’s foreign minister. When party leader Mitterlehner resigned in May because he could not cope with the internal power struggle, Kurz made his move for leadership of the övp.

On May 14, Kurz gave his party two options: accept him as a leader with unprecedented authority, or go into the next election without a clear leader. The övp submitted to Kurz and accepted his conditions. Kurz now had the power to choose the ministers under him and the right to nominate candidates for parliament, including party outsiders. He immediately declared the end of the coalition and called for reelections.

During the election campaign, Kurz was challenged with raising more votes than the leading spö and limiting the success of the far-right Freedom Party of Austria (fpö), Austria’s sister party to the Germany’s Alternative für Deutschland. (In September, German Chancellor Angela Merkel lost many votes to the rise of the far right in the federal elections and now faces major difficulties in forming a government). Unlike in Germany, Austria’s far right has been well-established in parliament for decades. The refugee crisis gave it added support and it was even seen as possibly winning Austria’s election. In spring, polls indicated that the fpö would provide Austria’s next chancellor and the övp would come third. Many had lost hope in the political future of the övp, which allowed Sebastian Kurz’s power grab.

When he became party leader, 31-year-old Kurz knew that his party needed to be revamped, and that if it was going to win it needed to shift to the right. Kurz began to present himself as the solution to the refugee crisis and copied much of the far right’s view on refugees. He promised to use dramatic measures to solve the refugee crisis. He even suggested sending the Austrian Army to Italy, where hundreds of thousands of refugees arrive. Consequently, the far right lost support and Kurz rose as Austria’s savior.

His success is admired even in Germany, where many in the Christian Democratic Union might say: “Oh, if we just had someone like him in Germany,” as Münchner Merkur reported after Austria’s election (Trumpet translation throughout).

When he served as foreign minister, Kurz saved Germany from being overwhelmed during the refugee crisis. He takes credit for stopping the refugee flow through the Balkans in February 2016, which limited the influx of refugees into Germany. An idea Merkel opposed because of its anti-humanitarian measures. If Kurz would not have acted, fences in the Balkans might never have been set up and the refugee crisis would have taken a completely different turn.

This is the kind of leadership Europe wants. The next generation in Europe demands its leaders take a bold stance against the refugee crisis to win back the people’s favor. Kurz is a leader with such ambition. He is often compared to another political superstar who recently made a comeback in Germany: Karl-Theodor zu Guttenberg.

Die Presse wrote that Kurz “also has many loyal fans in Germany, especially in Bavaria. With his appearance in the talk shows of ard and zdf, he has filled the gap left by the involuntary departure of Karl-Theodor zu Guttenberg.”

Both of these men share striking similarities in how they connect with the people. Prior to the election, Guttenberg proclaimed his favor for a Kurz victory. Both believe in the necessity of reforming the European Union to prepare it for the time ahead, a stronger cooperation with countries in Eastern Europe, a digital revolution, and more.

German newspapers, politicians and the German people see Guttenberg as the most likely person to lead Germany in the post-Merkel era. This despite many Germans still being upset over his plagiarism scandal. N-TV even suggested that Guttenberg could save his party as Kurz saved Austria’s people party.

Another man Kurz is also compared to is French President Emmanuel Macron. German newspaper Die Welt calls Kurz the Macron for migration and for East Europe, highlighting some striking similarities. Like Kurz, Macron transformed a party into a one-man show, won against a rising far right, and headed for the highest position in the country. In both cases, it was the success of an individual that changed the course of the election. Both of these young leaders also have a revolutionary vision for Europe: Kurz wants to solve the refugee crisis and bring Eastern Europe on board; Macron wants to solve the euro crisis and bring Southern Europe on board.

Bild described Kurz as a combination of Germany’s Guttenberg, Canada’s Justin Trudeau and France’s Macron. These politicians agree on the big issues of solving the refugee crisis and reforming and unifying the EU.

Remarkably, a prophecy in Revelation 17 describes 10 kings rising in Europe who will be of one mind and gain power at approximately the same time: “And the ten horns which thou sawest are ten kings, which have received no kingdom as yet; but receive power as kings one hour with the beast. These have one mind, and shall give their power and strength unto the beast” (verses 12-13).

Could Sebastian Kurz be one of these kings prophesied in Revelation 17?

On his trip to Brussels on October 19, Kurz was treated like a king. Bild reported (emphasis added):

He is the shooting star of the European political scene and probably soon the youngest head of government in the world.

The Austrian Chancellor Sebastian Kurz (31) is already courted in Brussels. Shortly before the start of the EU summit, he was welcomed by EU Commission President Jean-Claude Juncker and EU Council President Donald Tusk—like a king.

We often point our readers to a prophecy proclaimed by the late Herbert W. Armstrong, that Europe would be cut down to a union of 10 kings who give their power to Germany. Notice what Trumpet editor in chief Gerald Flurry wrote last May:

As we watch the rise of that superstate in Europe, we also need to keep an eye on the 10 kings who will rule over these 10 nations or groups of nations. The Bible reveals in Revelation 17 that they rise as individual heads of state, but at one moment they will unite and give their power to one overarching leader.

Kurz and Macron have a vision that could unite Eastern and Western Europe as well as north and south. But just as Mr. Armstrong saw from the Bible that these kings would be rising, he also saw that it would take more than a common vision to unite them. It would also take a common crisis.

The refugee and euro crises will lead up to that ultimate common crisis, but they won’t be sufficient to trigger the kings’ unification. An even bigger crisis is looming: the collapse of the American dollar. Mr. Armstrong prophesied that ultimate crisis would unite the 10 kings and cause them to give their power to “the beast”—a European superstate led by Germany.

Sebastian Kurz, Emmanuel Macron and Karl-Theodor zu Guttenberg have one vision of such a united Europe. Are we going to see a major financial crisis unite them in the near future? (Read our article “How the Global Financial Crisis Will Produce Europe’s 10 Kings” to learn about these stunning prophecies.)

Only time will tell who these prophesied kings are. But considering the timing and manner of Kurz’s power grab, his influence and prestige in Europe, as well as his connection to other prominent leaders in Europe, he is currently the most likely man to claim that throne in Austria.

While news analysts are concerned about the rise of the far right in Europe, they find relief in the victories of Kurz and Macron. But Bible prophecy reveals that the real danger lies in the strongmen gaining kingly power in Europe as they respond to the rise of the far right. These kings are in the process of acquiring more individual power in their respective countries, and the fate of Europe lies in their hands.

Watch Europe closely—events will unfold exactly as the Bible has prophesied. Request your free copy of Daniel Unlocks Revelation and watch as these prophecies are fulfilled right before your eyes.