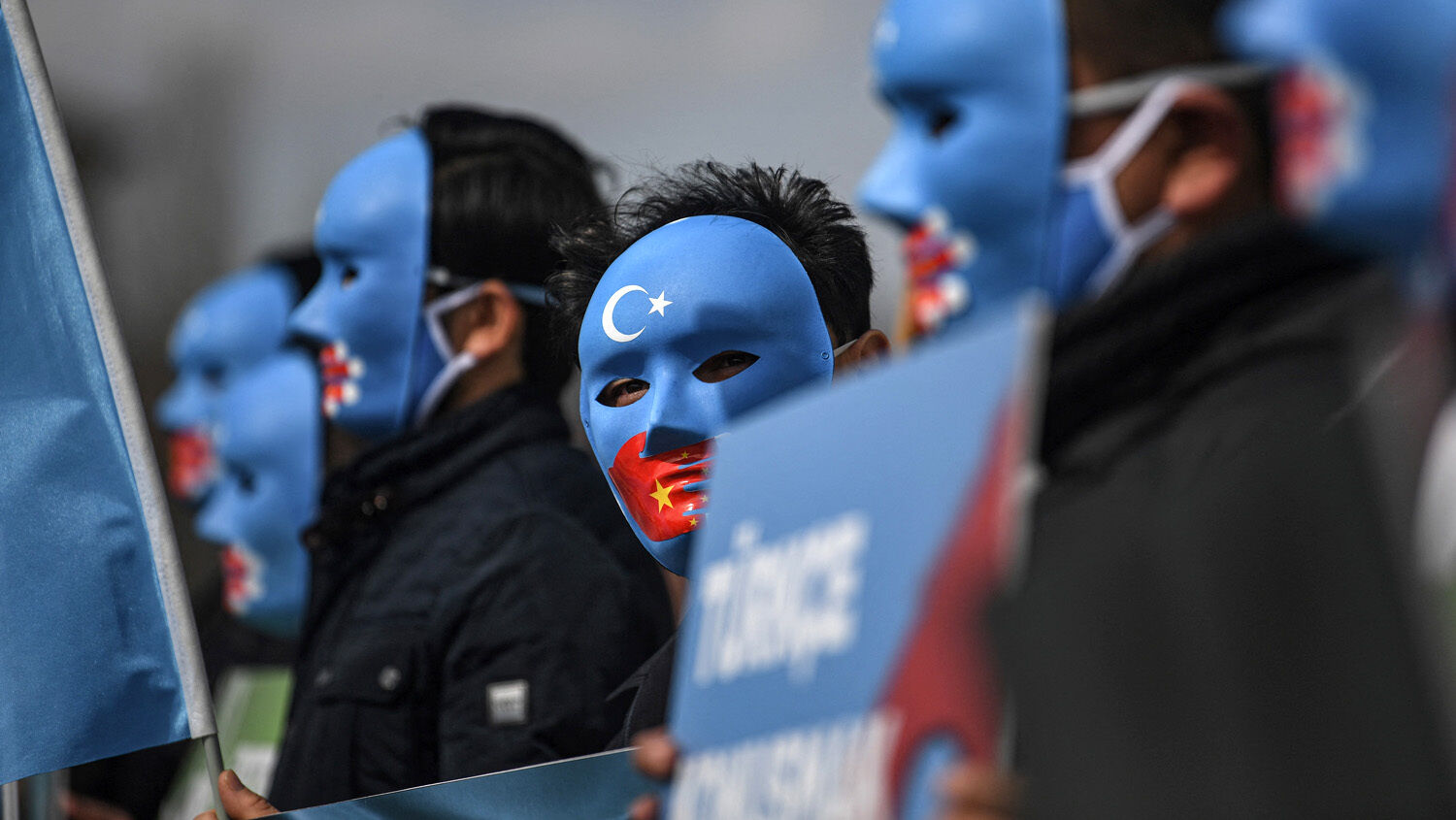 Demonstrators wearing masks painted with the colors of the flag of East Turkestan take part in a protest by supporters of the Uyghur minority on April 1, 2021, in Istanbul.
OZAN KOSE/AFP via Getty Images

The Victims of Communism Memorial Foundation (voc) released to the public on May 24 what it calls “the to-date largest and most significant leak of internal documents from directly within Xinjiang police networks.” Dubbed the “Xinjiang Police Files,” the leak was made to voc by an anonymous third party who hacked into China’s Public Security Bureau. voc verified the information contained in the leak. The Victims of Communism Memorial Foundation is a nonprofit organization founded by the United States government in 1993.

Xinjiang is a region in western China populated by Uyghurs, a Muslim Turkic people, who have lived under China’s rule since the mid-18th century. Many want independence—and Beijing has been doing all it can to stop that. To do so, the Chinese government has turned Xinjiang into one of the strictest police states in the world.

China has launched mass detentions of Uyghurs into “reeducation facilities” (concentration camps) where they are subjected to torture, brainwashing and other inhumane treatments. Uyghur women have received forced sterilizations and even forced abortions. Families whose men have been imprisoned have received ethnic Han Chinese “husbands” to take their place. What China is doing to the Uyghurs qualifies as genocide. (You can read more about China’s treatment of the Uyghurs in “What Happened to ‘Never Again’?” and “‘They Want the World to Bow Down to China.’”)

Much of this information has been hard to verify. China, as a Communist state, maintains a tight flow of information even in normal times. Xinjiang is in the far northwest of the country, far away from the more populated cities on the coast. The Xinjiang Police Files—available for anybody to look through—provide a rare window inside the inner workings of the police state. The files have corroborated many of the allegations surrounding China’s treatment of the Uyghurs.

Among the files were 2,884 “mugshots” of detainees. The photographs contain associated data, including why they were detained. The mugshots were all taken in 2018.

The youngest person in the files is Rahile Omer. She was 14 when detained and about 15 when photographed. The oldest, Anihan Hamit, was 73 in 2018.

The youngest person confirmed to be in a re-education camp is Rahile Omer, age 14 when she was detained, nearly age 15 when her image was taken by the police. pic.twitter.com/Sr0W6Rf2aN

Some of the reasons listed for Uyghurs’ internment show how intense China’s persecution is. Abdurrahman Abaz, age 50 in 2018, was detained for “reeducation” because he wore a beard and his wife wore a headscarf. Memtili Hoshur, age 23 in 2018, was apparently detained simply because of his family connections. Dawut Jume, age 32 in 2018, received 10 years because he “studied the [Koran] illegally from his mother Bilikzi Toheti for seven days.” Reshit Ehet, age 20 in 2018, had written for his reason of internment: “Category 5 | People who do not trust.”

The Xinjiang Police Files also contain photographs of “contraband” items confiscated by authorities. These include objects such as Islamic prayer rugs, hijabs (head coverings) and quotations from the Koran.

Photographs were not all the Xinjiang Police Files contain. They also contain transcripts of key speeches delivered by major Chinese government figures. These demonstrate some of the heavy-handedness of China’s Xinjiang policies.

For example, a 2017 speech from Xinjiang Party Secretary Chen Quanguo (which voc has only draft translated) has these instructions for people who flee arrest: “Shoot him dead if he run a few steps. You see, in such a situation, if they run, just kill them. There will be no problem, because we have already authorized this a long time ago.” In Xinjiang, running “a few steps” for avoiding arrest on account of your beard means you could be shot.

In Xinjiang, to quote Mao Zedong, “political power grows out of the barrel of a gun.”

Some of the documents also show how involved Chinese General Secretary Xi Jinping is with what is going on in Xinjiang. A 2018 speech by Minister of Public Security Zhao Kenzhi cites the following quote from Xi to set public policy: “Xinjiang’s ethnic separatist forces have religious extremism as their ideological basis. [F]irst of all, we must cleanse the source and carry out ‘de-extremification work.” Zhao reiterated the importance of Beijing’s involvement in Xinjiang affairs: “fully reflecting the great importance, concern and support of the [Chinese Communist Party] Central Committee with Comrade Xi Jinping at its core for the work in Xinjiang.”

None of this is new. China’s crackdown on the Uyghurs started after Xi gave the orders in 2014. But the documents show how personally invested Xi has continued to be in Xinjiang years later.

When motivated by national survival, it’s hard to get dictators like Xi to change course.

The Xinjiang Police Files are a wealth of information, but they don’t actually reveal much that wasn’t known or at least suspected. The world has had some knowledge of all of this for years now. They haven’t done much about it. The Xinjiang Police Files bring Beijing’s crimes into sharper clarity than ever before, but it’s unlikely anybody will do anything about it. Corporations from some of the world’s largest economies—the United States, Germany and many others—have lobbied support for China’s actions in Xinjiang. There’s too much money to be made in China for many to take a stand. And even if there weren’t, China has one of the world’s most powerful militaries. In all likelihood, nothing short of war could get Beijing to stop its genocide—and nobody at the moment is brave enough to attempt that.

After Nazi Germany’s defeat in World War ii, the world woke up to the horrors of the Holocaust. World leaders pledged they would “never again” allow crimes like genocide to happen. Yet China is accomplishing a genocide on a comparable scale to the Holocaust. In the era of the Internet, we have greater information access than the Allies did in World War ii. Yet the world is content to shove “never again” under the rug to placate the Chinese dragon.

China is doing everything it can to blot out the Uyghur nation from existence. And despite the growing levels of evidence to China’s genocide, the Uyghurs have no helper.

Many in authority may try to forget about the evils happening in Xinjiang. But there is one leader who refuses to forget.

There was a God in heaven who heard their cry. “And the Lord said, I have surely seen the affliction of my people which are in Egypt, and have heard their cry by reason of their taskmasters; for I know their sorrows; And I am come down to deliver them out of the hand of the Egyptians, and to bring them up out of that land unto a good land …” (Exodus 3:7-8). The book of Exodus shows how God supernaturally intervened to force the Egyptians to free the Israelite slaves.

It’s true that God freed the Israelites partly because of a promise He made to their ancestors (Exodus 2:24-25), but that doesn’t mean He doesn’t hear the sufferings of other people around the world. 1 Timothy 2:4 states that God wants “all men to be saved.” Isaiah 61:1 shows that God wants to “proclaim liberty to the captives, and the opening of the prison to them that are bound.” God hears the cries of the Uyghurs. And—in His time—God promises to give them real freedom.

“You don’t have to believe it!” late theologian Herbert W. Armstrong wrote in The Wonderful World Tomorrow—What It Will Be Like. “It will happen, regardless. It is sure—the world’s only sure hope. This advance good news of tomorrow is as certain as the rising of tomorrow’s sun. Humanity won’t bring it about—it is going to be done to us. …

“Utopia? Why not. Why should it be an imaginary or impossible pipe-dream? There is a cause for today’s world chaos and threat of human extinction. That cause will be supplanted by that which will bring a utopia that is real, that is successfully functioning!”

Many people associate Bible prophecy with “doom and gloom.” There are many prophecies foretelling disasters hitting the world not unlike what the Uyghurs are already experiencing. But the same Bible prophesies of the conclusion to those world troubles—a world giving “liberty to the captives.” A world where “they shall beat their swords into plowshares, and their spears into pruninghooks: nation shall not lift up a sword against nation, neither shall they learn war any more” (Micah 4:3).

To learn more about this soon-coming world—a world of freedom for the Uyghurs and all mankind—please request a free copy of The Wonderful World Tomorrow—What It Will Be Like.