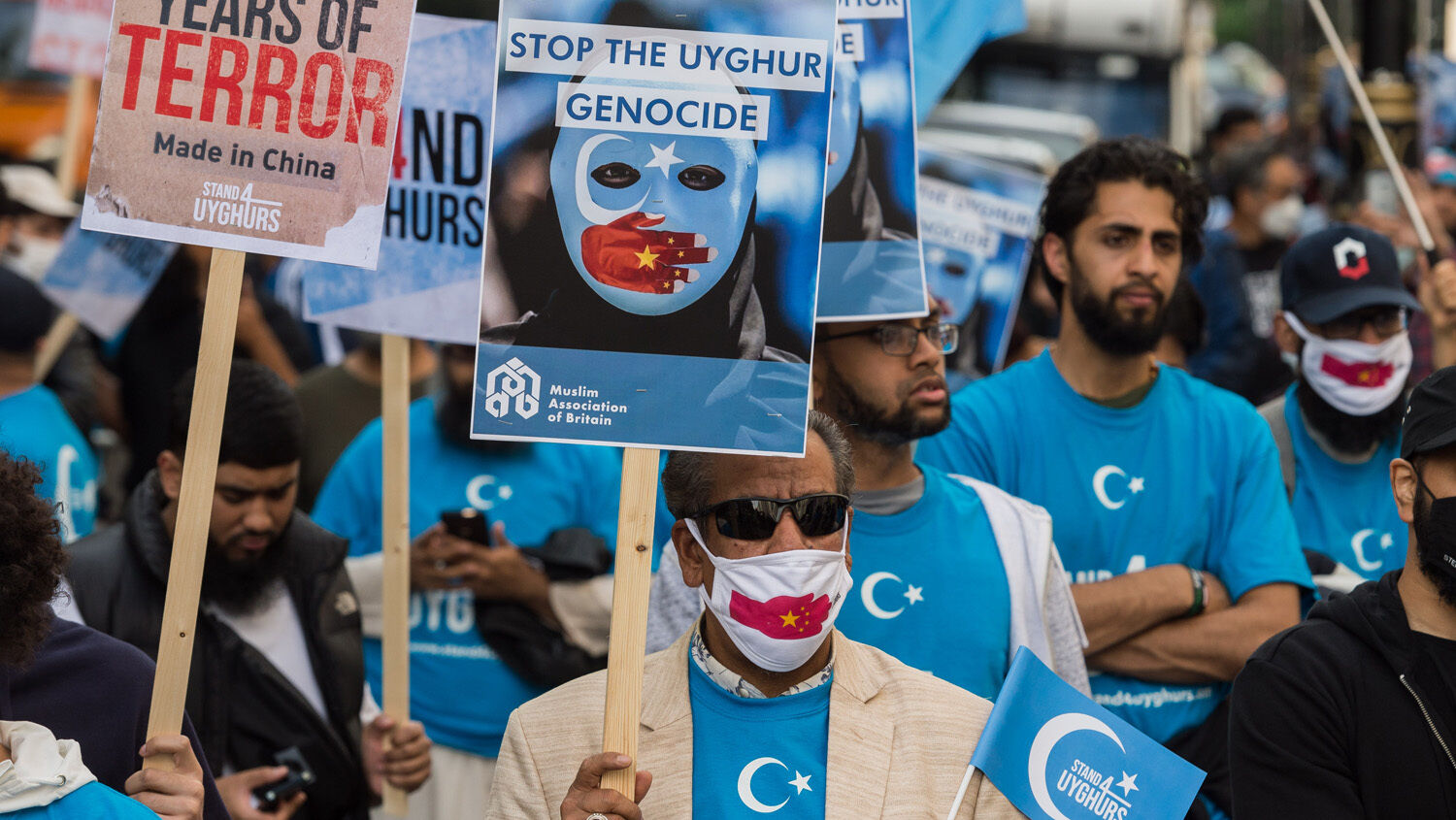 Protesters demonstrate in front of the Chinese Embassy in London on July 1, 2021, in support of the repressed Uyghur Muslim community who live in Xinjiang in northwest China.
Wiktor Szymanowicz/Future Publishing via Getty Images

Xinjiang Police Files have once more proved what many suspected: China is suppressing its Uyghur population in a violent, human rights defying way. In its May 24 morning brief, Spiegel Online wrote: “Germany has made itself economically dependent on a brutal dictatorship” (Trumpet translation throughout). Many consider Germany to be an innocent trading partner, but German companies have left a trail of blood.

Journalists from 14 media outlets around the world—including Britain’s bbc, France’s Le Monde, Spain’s El País, Germany’s Spiegel and Bayerischer Rundfunk—have analyzed the Xinjiang Police Files. While the details of China’s torture and reeducation camp have never been vividly illustrated, the grotesque human rights violations have been known for years. Still, Germany, which has its own history as a police state, racial discrimination and concentration camps, has chosen to be economically reliant on China.

“The Xinjiang Police Files also confront the German government in Berlin with uncomfortable questions,” Spiegel Online wrote. “Just recently, Russian President Vladimir Putin’s brutal war of aggression showed that Germany’s Russia strategy of the past decade has failed. Moscow provided cheap energy but, at the same time, undermined Europe’s security and freedom and pursued an imperialist project all along. In February, it became clear how dependent the German government under Angela Merkel and [Social Democrat] grandees had made itself on Russian gas in the past.”

It is true that Germany has benefited from China’s rise more than almost any other Western country. But the price may have been high. The legacy of Merkel’s chancellorship, making Germany rich at the expense of close economic ties with the world’s two largest dictatorships, has not yet been sufficiently discussed. Not only from a moral point of view, but also because it is unclear how sustainable the strategy was: The traffic light government and, in particular, Green Foreign Minister Annalena Baerbock have announced a new course. But as difficult as it is to change course on Russian energy—it’s child’s play compared to what it would mean to make the German economic model less dependent on China. This discussion is just beginning.

EuroIntelligence also highlighted the severe consequences this may have for Germany’s economy. The car industry alone shows how deep the dependence is: Mercedes sells a third of its cars to China; Volkswagen, 40 percent.

Both Russia and China have been exposed. But when it comes to Germany, one might assume it’s innocent. But is that the case?

Germany’s industrialists have a long history that suggests it’s not.

Germany’s third-largest company, Siemens, wrote the following about its World War ii history: “The use of forced labor was seen as the only way to compensate for labor shortages. Starting in 1940, Siemens relied increasingly on forced laborers to maintain production levels. These laborers included people from territories occupied by the German military, prisoners of war, Jews, Sinti, Roma and, in the final phases of the war, concentration camp inmates. During the entire period from 1940 to 1945, at least 80,000 forced laborers worked at Siemens.”

Siemens is acutely aware of that history. You would think it would actively work to never be associated with such evils again. “Yet right now, Siemens is lobbying hard to be allowed to continue using products made by Chinese slaves in the Xinjiang province,” Trumpet editor in chief Gerald Flurry explained in “Rising From the German Underground.” “Shamefully, many American companies also work with slave labor in Xinjiang. But has Siemens really learned its lesson? Can you be sure it would never repeat its World War ii history?”

Apparently, Siemens reasons (and it’s not the only one) that it can get away with slave labor if another country does the dirty work. But it could even be worse. There are indications that Siemens and others have a direct involvement in aiding China’s suppression. World Uyghur Congress wrote in 2020:

Recent reports have shown that the supply chain of German companies like Adidas, Puma, bmw are tainted by Uyghur forced labor. On the other hand, Siemens is suspected of being involved in the serious human rights violations against the Uyghurs in East Turkistan [Kazakhstan]. The multinational company cooperated with China Electronics Technology Group Cooperation (cetc), which developed a surveillance app to monitor the everyday life of Uyghurs in East Turkistan. Despite these severe accusations, Siemens has not shown transparency regarding its cooperation with cetc. The German chemical group basf is running a factory in the city Korla close to a detention center. Volkswagen, which is operating a factory in Urumqi surrounded by internment camps, signed an agreement with the People’s Armed Police, which is responsible for the detention of 1.8 to 3 million Uyghurs and other Turkic groups. Both of these German companies have failed to guarantee that Uyghurs are not subjected to forced labor or detention.

World Uyghur Congress also referred to a 2019 article in Germany’s prestigious Frankfurter Allgemeine Zeitung that asked, “What Are VW and Siemens Doing in Xinjiang?”

World Uyghur Congress President Dolkun Isa lamented: “China is committing a genocide against the Uyghurs and other Turkic groups. We cannot stay idle to this genocide when we promised never again. The German government needs to take meaningful actions to address the Uyghur crisis and to put pressure on the Chinese government. German companies can no longer be silent on their business in East Turkistan. They need to make sure that they are not profiting from the Uyghur genocide.”

Yet such calls have been ignored.

In 1944, Curt Riess explained Germany’s underlying motivation in The Nazis Go Underground. “German industrialists did business and wanted to do business,” he noted. “But they went about it in the way generals go about winning a war. They used many tricks, as all businessmen do; but this was for them only a question of tactics. Behind and above all these tactics was a definite, never-changing common strategy, the goal of which was to conquer the whole world. First with goods. Later … German industrialists have been just as imperialistic as German generals—perhaps more so.”

“Of course these men wanted to do business,” Riess wrote. “But more important to them was that this business should be a preparation for or a proof of Germany’s domination of the world.”

German companies want to be the best in the world, even if that means using slave labor. Over and again, Germany has taken every advantage it could to rise to be one of the world’s top economies. It has created a European Union that uses the euro to exploit weaker nations. It has created a strong economic reliance on Russia to grow its businesses. It has relied on China to advance its industry. Germany has become an economic giant not by chance, but by calculation. Germany is again building an economic empire. But as Mr. Flurry has warned, “Just as in World War ii, much of this business empire will be built on the back of ‘slaves, and souls of men.’” Mr. Flurry bases this warning on a prophecy in Revelation 18.

Germany is again faced with the choice either to take the economic hit and confront its trading partners or to reveal its own imperialistic ambitions. Its relations with Russia tend to show the latter. Bible prophecy also specifically reveals that there is a connection between Germany’s business deals and its imperialistic goals. Mr. Flurry explained:

Ezekiel 27 gives an even more detailed prophecy of merchants, or businessmen, exploiting wealth from around the globe. Tyre is symbolism for modern-day Germany. The next chapter states that “by your wisdom and your understanding you have gotten wealth for yourself, and have gathered gold and silver into your treasuries; by your great wisdom in trade you have increased your wealth …” (Ezekiel 28:4-5; Revised Standard Version). The Bible continually emphasizes the connection between this empire and business.

Revelation 17:17 describes the merchants who will enrich themselves off this beast power: “For God hath put in their hearts to fulfil his will, and to agree, and give their kingdom unto the beast, until the words of God shall be fulfilled.” Note that! God says that this business-fueled German-led empire will fulfill His will. Other prophecies show that it will wreak unspeakable destruction on America and Britain and other English-speaking nations. How could such atrocities possibly be the will of God?

The Bible is filled with prophecies for our day that almost nobody pays attention to. These prophecies explain our world far better than modern analysts or historians. They also explain why our world is the way it is. They answer the question that few dare to ask: Where is God in today’s evil world? To understand Germany’s imperialistic ambitions and how God is using the nation for a specific purpose, please read “Rising From the German Underground.” Also read “What Happened to ‘Never Again’?”