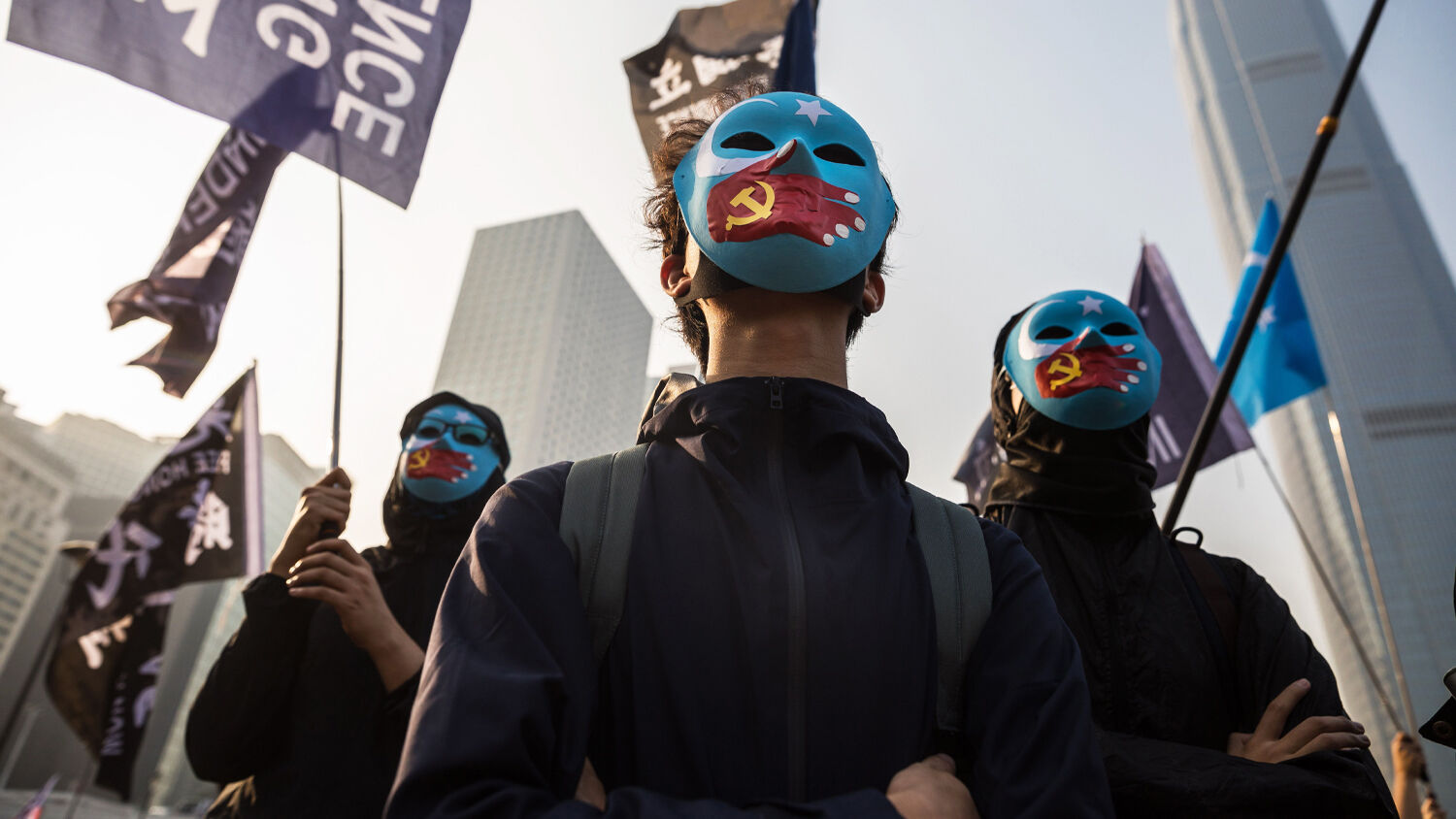 Protesters attend a rally in Hong Kong on Dec. 22, 2019, to show support for the Uyghur minority in China.
DALE DE LA REY/AFP/Getty Images

Decrying racial injustice in America has become a prominent part of some U.S. companies’ public image. But when it comes to China committing ‘the largest incarceration of an ethnoreligious minority since the Holocaust,’ they seem to think profits are more important.

This summer, as anarchic protests tore through American cities, Nike made headlines after unveiling new ads showcasing the company’s determination to fight alongside the protesters against racial injustice. “When things aren’t fair, we’ll come together for change,” one commercial said. Another told viewers to join in the movement: “Don’t pretend there’s not a problem in America. Don’t turn your back on racism,” and “don’t sit back and be silent.”

Around the same time, Apple grabbed attention for bewailing “the pain deeply etched in the soul of our nation.” It published a separate statement saying: “Things must change, and Apple’s committed to being a force for that change.”

The spotlight also shined on Coca-Cola after it pledged allegiance even to the cause’s extreme elements, saying: “Companies like ours must speak up as allies to the Black Lives Matter movement. We stand with those seeking justice and equality. … We believe our company and our brands have the power to drive change.”

No surprises there. These types of statements were so ubiquitous at the time that companies opting not to make them were sometimes “canceled” by the mobs.

But these three firms and many others are now back in the news for a different reason. “Companies like Apple, Nike, Coca-Cola, they are unhappy about this bill and they’re trying to get it weakened to their liking,” Salih Hudayar told American Conservative in an interview published on December 4.

Hudayar was born in Xinjiang, a region China conquered in the 18th century. Ever since, it has been a flash point for conflicts because the indigenous Uyghur people—such as Hudayar—don’t want their region to be part of China. The Uyghurs are mainly Turkic-speaking Muslims—linguistically, religiously and racially different from the Han Chinese who make up around 90 percent of China’s 1.4 billion people. Most of the 12 million Uyghurs in Xinjiang wish for the region to be an autonomous country. But the Han refuse to release it from their “great family of Chinese national territory.”

Tensions worsened throughout the 1990s and 2000s. In 2014, China’s new leader, Xi Jinping, cracked down. “Show absolutely no mercy,” he said in a speech to officials of the Chinese Communist Party (ccp). To subjugate the Uyghurs, he said, “the weapons of the people’s democratic dictatorship must be wielded without any hesitation or wavering.”

These were terrifying orders. But Xi’s government quickly transformed them into a nightmarish reality. By last year, somewhere between 1.1 million and 3 million of the region’s Uyghurs were detained in what the Communist Party calls “reeducation centers.” The ccp says the goal of detaining Uyghurs is to purge religious extremism from their thinking and teach them vocational skills. But evidence from survivors and leaked ccp documents reveals that what’s really happening is nothing short of mass enslavement and genocide.

Detainees are forced to violate their religion by consuming pork and alcohol. They are forbidden to pray. They often remain captive until they abandon their Muslim culture in favor of “superior” mainstream Han Chinese culture. Those who resist routinely face starvation, torture, brainwashing, sexual abuse, forced abortions and sterilization. Unknown numbers who fail to assimilate are killed in the camps.

Renowned anthropologist Adrian Zens says China’s treatment of the Uyghurs meets the United Nations definition of genocide. He equates it to “the largest incarceration of an ethnoreligious minority since the Holocaust.”

Hundreds of thousands of detainees are used as forced laborers, working in construction and agriculture inside Xinjiang. Hudayar said tens of thousands of others are “being shipped off, loaded onto buses, trains and brought” into other parts of China. Research from the Australian Strategic Policy Institute (aspi) confirms this. Using satellite imagery and on-the-ground reporting, it estimates that from 2017 to 2019 alone, some 80,000 Uyghur slave laborers were shipped “directly from detention camps” to other locations in China.

And that’s where the bill that Hudayar mentioned comes in.

Called the Uyghur Forced Labor Prevention Act, the bill aims to stop U.S. companies from tapping into the ccp’s slave labor. It states: “Goods manufactured or produced in Xinjiang shall not be entitled to entry into the United States, unless Customs and Border Protection determines that the goods were not manufactured by convict labor, forced labor, or indentured labor under penal sanctions—and reports such a determination to Congress and to the public.”

In September, the bill passed the House and is now waiting to go before the Senate, where Congressional aides say it has the backing to pass.

But as Hudayar said, Nike, Apple, Coca-Cola and others who were up in arms about racial injustices in the U.S. are now lobbying to have the bill watered down before it passes.

Why would these companies be working to weaken a bill that seeks to reduce the ccp’s incentives to enslave one of China’s ethnic minorities? Because they are profiting from that slave labor.

An aspi report titled “Uyghurs for Sale” determines exactly which factories those Uyghur slave laborers are shipped to—and exactly which multinational companies rely on those laborers, thereby contributing to the Uyghur enslavement. It states: “Uyghurs are working in factories that are in the supply chains of at least 82 well-known global brands in the technology, clothing and automotive sectors, including Apple, bmw, Gap, Huawei, Nike, Samsung, Sony and Volkswagen.”

Zeroing in on Nike, the aspi report says the slave labor is not at some distant, nebulous end of their supply chain. Nor is it a minor cog in the company’s machinery:

In January 2020, around 600 ethnic minority workers from Xinjiang were employed at Qingdao Taekwang Shoes Co. Ltd. Taekwang’s primary customer is the American multinational company Nike Incorporated. The Xinjiang workers are mostly Uyghur women from … remote parts of southern Xinjiang that the Chinese government has described as “backward” and “disturbed by religious extremism.” At the factory, the Uyghur laborers make Nike shoes …. Taekwang’s Laixi factory is one of the largest manufacturers of shoes for Nike, producing more than 7 million pairs for the American brand annually.

Regarding Apple, the report notes that in 2017 one of the company’s main Chinese contractors called O-Film Technology received 700 Uyghurs “transferred from Xinjiang.” The Chinese Communist Party believes the work program these 700 forced laborers were part of at O-Film would “gradually alter their ideology.”

A separate report in the Wall Street Journal added Coca-Cola to the list, noting that the Cofco Tunhe factory that supplies it with sugar is run largely by forced labor. This was confirmed by a study published in March by the Congressional-Executive Commission on China.

So it’s easy to see why Nike, Apple, Coca-Cola and others would want the Uyghur Forced Labor Prevention Act to be gutted. They are profiting from the Chinese Communist Party’s exploitation of its Uyghur minority, and apparently hope to continue doing so.

Nike said this summer: “When things aren’t fair, we’ll come together for change.” Apple called itself a “force for that change.” And Coca-Cola upheld its power “to drive change.” But when it comes to slave labor in China that they are profiting from, these companies are spending big bucks to keep the situation the same.

In America, it’s all virtue signaling about racial injustice. In China, it’s close cooperation with a murderous regime run on slave labor. Rank hypocrisy of the foulest type.

What explains this hypocrisy and the egregious double standard? Why is it that so many of those who claim to be concerned about racism, slavery and injustice are upset only by problems in the U.S. when other nations have problems orders of magnitude more widespread and severe?

There is a clear reason. And it is a vital one to comprehend. You can come to understand it by reading theTrumpet.com managing editor Brad Macdonald’s article “The Global Ambition to Destroy America and Its President.”