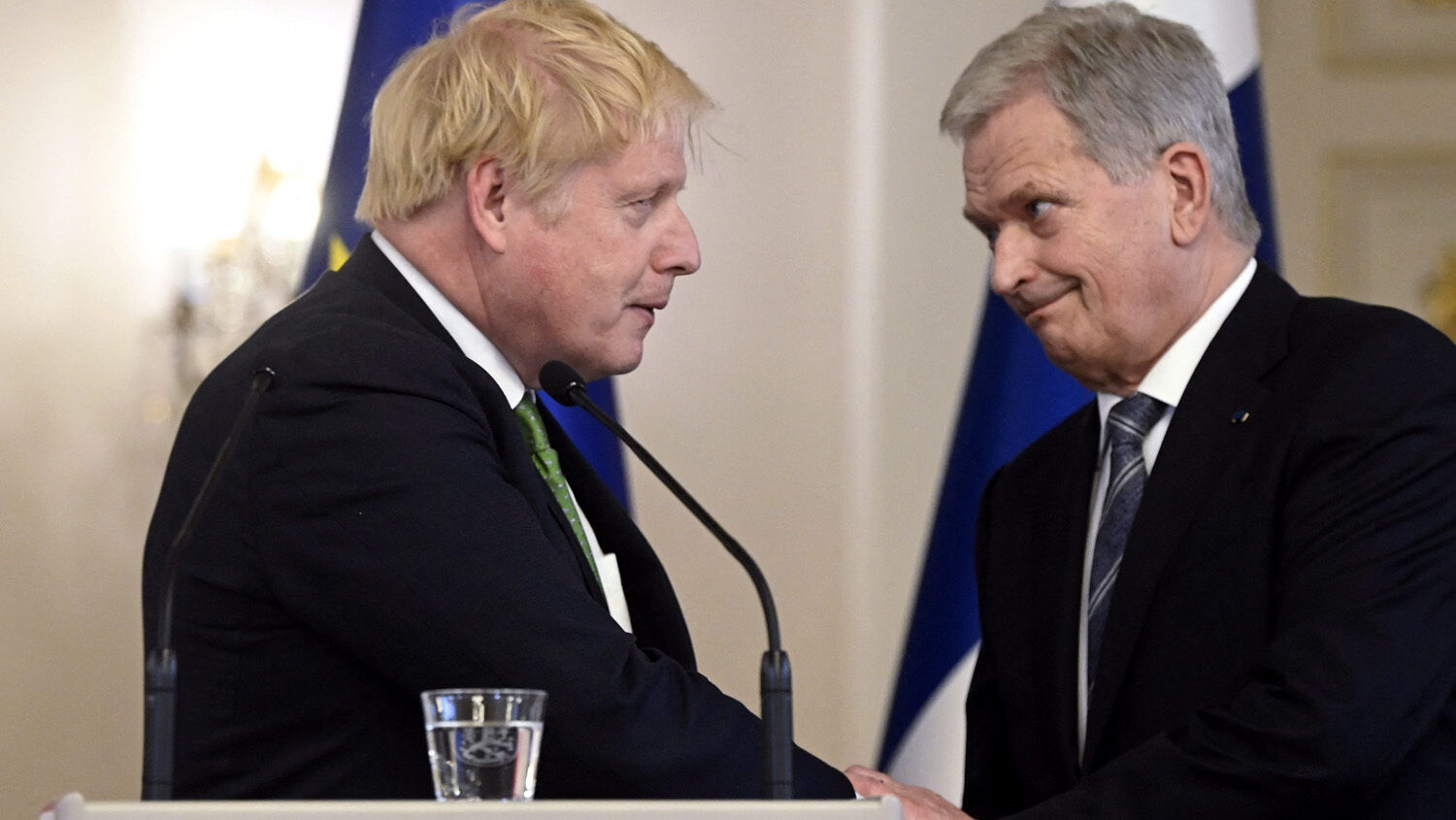 Northern Europe looks for a savior from Russia.

“There is a bear in the woods. For some people, the bear is easy to see. Others don’t see it at all. Some people say the bear is tame. Others say it’s vicious and dangerous. Since no one can really be sure who’s right, isn’t it smart to be as strong as the bear?”

Those are the words from a famous ad for United States President Ronald Reagan’s reelection campaign in 1984. He was using the bear as a symbol of the Soviet Union. Reagan was claiming he was the man strong enough to stand up to the Union of Soviet Socialist Republics, whether Moscow was a threat or not. Reagan went on to win the largest electoral landslide in American history.

Almost 40 years later, the Russian bear is still in the woods. Today, this bear is on a “vicious and dangerous” rampage in Ukraine. And America isn’t the only one seeing this bear. Countries in northern Europe see what Russian President Vladimir Putin is doing, and they are terrified. And this is leading them to make some remarkable choices.

Finland announced it intends to seek membership with the U.S.-led North Atlantic Treaty Organization. Finnish President Sauli Niinistö and Prime Minister Sanna Marin released a joint statement on May 12 endorsing Helsinki’s nato candidacy: “Finland must apply for nato membership without delay. We hope that the national steps still needed to make this decision will be taken rapidly within the next few days.”

The Swedish government is divided as to whether Stockholm should join the alliance. But Swedish Prime Minister Magdalena Andersson held a joint press conference with Marin in April supporting nato membership. “This is a very important time in history,” she said. “The security landscape has completely changed. We have to analyze the situation to see what is best for Sweden’s security, for the Swedish people, in this new situation.”

The United Kingdom, a nuclear-armed nato member, has promised to defend Sweden and Finland against Russia. British Prime Minister Boris Johnson signed mutual security agreements with both Andersson and Niinistö this week.

Russia hasn’t taken too kindly to Sweden’s and Finland’s decisions. Dmitri Medvedev, former Russian president and current deputy head of Russia’s security council, said “the [military] balance must be restored” to the Baltic Sea. He said “it will no longer be possible to talk about any non-nuclear status of the Baltics,” the Telegraph reported on April 14. He was probably implying Russia could move nuclear weapons to Kaliningrad, a Russian exclave bordering Poland.

The Finnish border is Russia’s second largest in Europe. Stockholm is a boat ride away from Saint Petersburg, Russia’s second-biggest city. Moscow is taking the possibility of Sweden and Finland joining nato seriously.

This is precisely the reason neither country has joined nato thus far. At the end of World War ii, as Sweden and Finland saw Joseph Stalin’s Soviet Union conquer all the way to Berlin, they feared for their safety. They pledged neutrality to avoid angering Moscow. This makes their quest for nato membership today so remarkable.

The Finns fought the Soviet Union in World War ii. They lost the war and lost territory with it. When nato was formed in 1949, even though they were one of the European countries most vulnerable to a Soviet invasion, they didn’t join the organization.

In 1956 and 1968, the Soviets invaded their Communist satellite states Hungary and Czechoslovakia, respectively. Both countries were trying to break free from Soviet-style communism. Moscow used its military to snuff out any rebellion. These events didn’t scare Finland and Sweden into joining nato.

In 2008, Putin invaded the ex-Soviet republic of Georgia to support two breakaway regions. In 2014, he annexed Ukraine’s Crimean Peninsula. These events didn’t scare Finland and Sweden enough, either.

The latest Ukrainian war is different. This time, Putin has shown he is willing to launch a bloody, full-scale invasion of a strong neighbor. His soldiers have shown striking brutality. And he has proved he’s unwilling to back down, no matter the cost.

Ukraine wasn’t a nato member. Its neutrality between nato and Russia didn’t protect it. Stockholm and Helsinki can’t help but wonder if they’re next. They could be wondering if their neutrality is actually a target rather than a shield.

The bottom line: Europeans are scared. And this fear is motivating them to act in ways they once disregarded.

In 2022, unlike in 1984, nobody is saying this bear is tame. Everybody sees clearly it’s vicious and dangerous. Europeans in countries like Sweden and Finland see they won’t be able to stand up to Russia by themselves. They are looking for someone “as strong as the bear” to protect them.

Who will Europe turn to? Britain has nuclear weapons and a large army. Turning to London may be a smart short-term move for Stockholm and Helsinki. But Britain, compared to Russia, is still a military lightweight. The Satan ii, a Russian nuclear missile, can carry a large enough nuclear payload to destroy the entirety of the United Kingdom.

The U.S.-led nato then may seem like the more attractive option. America’s military is a much more even match to Russia’s. But America can’t be relied on under the leadership of Joe Biden. The Afghanistan fiasco last year has shown Europeans that Washington doesn’t have the will to get into another major war. And Biden’s cognitive decline is, as Trumpet executive editor Stephen Flurry wrote last month, “on full display for the world to see.”

The only real option for Europeans is to turn to each other.

“[Russia’s moves] shocked the world. Most of all, it shocked Europe,” Trumpet editor in chief Gerald Flurry wrote regarding Russia’s conquest of Ukraine. “In a stroke, Russian President Vladimir Putin redrew Ukraine’s borders. … The fear you see in Europe … is going to cause 10 leaders in Europe to unite in a sudden and dramatic way …. [Vladimir Putin] is a powerful man, and he is having a forceful effect on Europe. The reaction within Europe to this crisis is something you need to watch, because it is shaping and molding the future composition of the Holy Roman Empire! It is making European leaders move urgently to tie together this Holy Roman Empire ….”

Mr. Flurry didn’t write this recently. He wrote it in 2014, after Russia annexed Crimea. Back then, Russia took over one little peninsula. Now, it’s trying to take over the whole country. This is terrifying Europe even more. And Europeans are making even more drastic decisions in response.

Mr. Flurry based his predictions on biblical prophecies like those in Revelation 17. The chapter pictures a “beast” (verse 3), a biblical symbol for an empire (see Daniel 7). This beast has “seven heads,” symbolizing seven consecutive incarnations of this empire (Revelation 17:10). This empire is to last until the Second Coming of Christ, a yet future event (verse 14). Tying in other scriptures, the identity of this empire is revealed to be the Roman Empire—principally, seven resurrections of this empire throughout history. (Please request a free copy of Who or What Is the Prophetic Beast?, by Herbert W. Armstrong, for more information.)

Six of these resurrections have come and gone in Europe, the last of them being Adolf Hitler’s Third Reich. That means one more is on the way. But how will this last resurrection come about?

There will be a variety of causes. One of them will be Europeans looking for a strong leader to protect them. Protect them from threats like Vladimir Putin. Related prophecies in the book of Daniel give some detail of the kind of man they will look for. He will be “a king of bold countenance, one who understands riddles” (Daniel 8:23; Revised Standard Version). He’ll see the solutions to Europe’s problems when nobody else will. “His power shall be mighty” (verse 24). He’ll even be bold enough to attack aggressive countries located in the northeast (Daniel 11:44)—countries like Russia.

Europeans are looking for someone like this—their own “Ronald Reagan”—to save them from Vladimir Putin right now.

To learn more, please read Mr. Flurry’s article “The Crimean Crisis Is Reshaping Europe!” Also request a free copy of Who or What Is the Prophetic Beast? to learn what the Bible says about Europe and its near future.

[Correction: An earlier version of this article stated that Russia’s border with Finland is its largest in Europe. Ukraine is actually Russia’s largest border in Europe. The Trumpet regrets the error.]