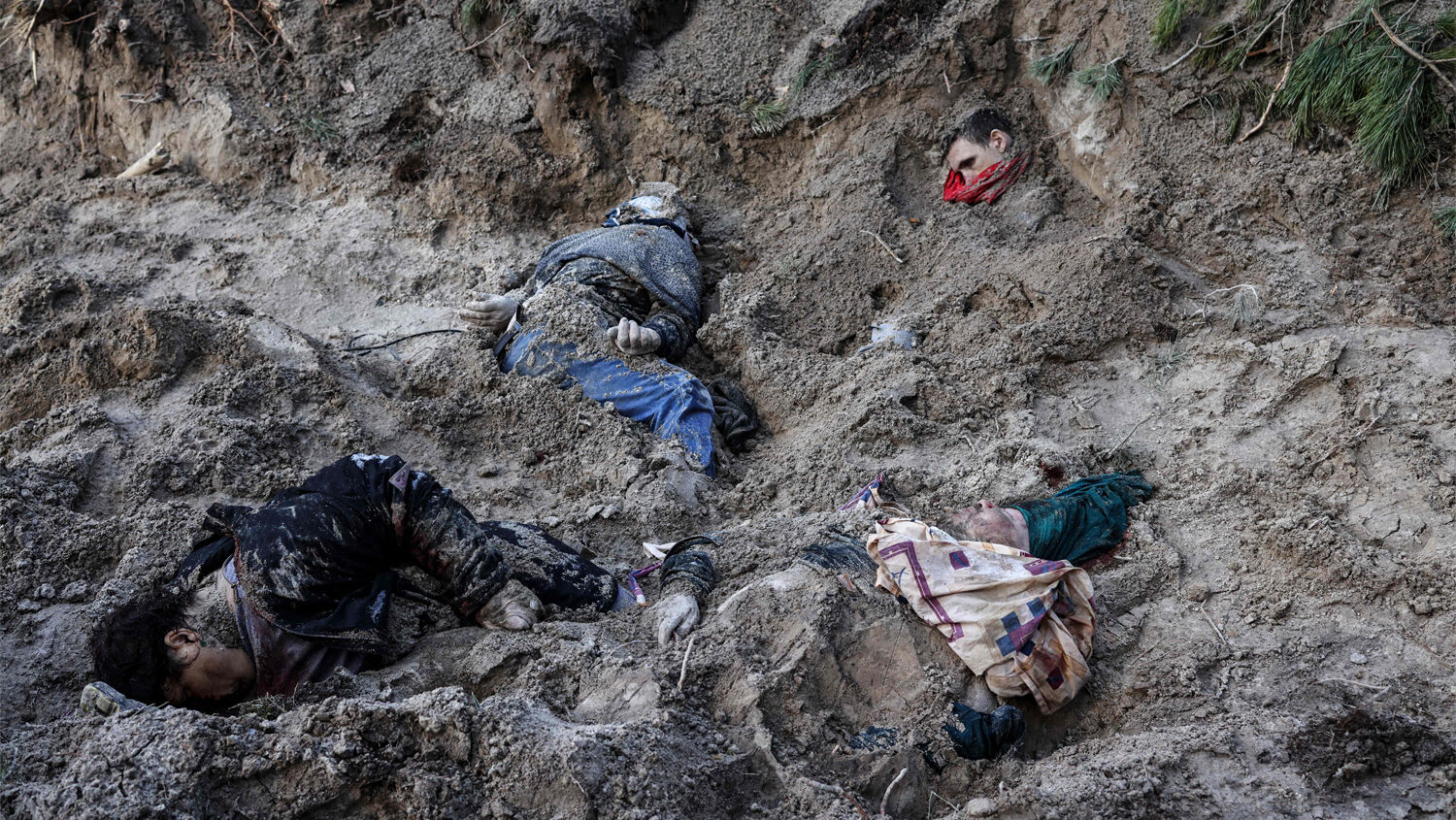 Bodies in a mass grave in Bucha, northwest of the Ukrainian capital Kyiv, on April 4
RONALDO SCHEMIDT/AFP via Getty Images

There’s only one word for what Russia is leaving behind in Ukraine: evil. As the Russian Army retreats from Kyiv, the scale of its evil has been revealed.

Bodies, with hands tied behind their backs, litter the streets. Bodies carpet the basements of buildings the Russians used as command posts. The Russians cut off ears and pulled out teeth, torturing and then killing. Bodies are stuffed in manholes and buried in gardens and play areas. In some cases, the Russians wouldn’t let people travel anywhere to bury them, so they had to dig graves where they were.

Some bodies hid landmines, according to Ukrainian authorities, designed to kill any who would try to give the dead some dignity.

Many of these were not civilians caught in the crossfire as the Army pursued a military objective regardless of the human cost. This isn’t disregard for human life, but the deliberate destruction of it. Many of these civilians were killed either as part of a calculated policy to spread terror to try to break the will of Ukrainians or for “entertainment” by bored soldiers.

In Bucha, one of the towns occupied by Russians, the mayor said 118 bodies had been found in mass graves. Agence France-Presse reported that the local government has said at least 280 were killed.

“The amount of graves in courtyards, streets, parks and squares, we’ll calculate in the morning more accurately,” Mayor Anatoliy Fedoruk said. “The word ‘crime’ … is too mild a description of what happened here.”

Russia claims the atrocities were committed by Ukrainians as a false flag designed to turn the world against Russia. It used the same excuse in Syria. But journalists traveling with Ukrainian forces report the bodies were already dead and decaying when they arrived.

Many stories that have turned out to be false have been circulated on social media, and even made their way into the mainstream throughout the conflict. So I’ve tried to rely on stories verified by journalists on the ground. There’s little room to doubt what is happening here.

More common than the bodies are mines—hidden everywhere from houses to children’s parks. What possible military reason is there for mining a playground? It will be a long time before these places are safe to live in again—and until then, the list of Ukrainian victims will only grow.

Jack Watling of the Royal United Services Institute wrote at the Telegraph that this is a result of official Russian policy. Russian President Vladimir Putin said he wanted to go after those who helped move Ukraine out of the Russian orbit in 2014. “Ukrainians therefore were told unambiguously that their civil society leaders would be hunted—a mission for which Russian Special Forces had been rehearsing—and that to support them would incur repressive collective punishment,” wrote Watling. So the civilians were tortured and killed because their leaders would not surrender.

Russia’s state-owned ria Novosti confirmed this impression, explaining how Russia aimed to “denazify” Ukraine. The Russian government uses “Nazi” the same way the radical left does—all their opponents are, by definition, Nazis. Anyone who supports Ukraine’s current government, or even Ukraine’s independence from Russia, is a Nazi.

“Denazification is a set of measures aimed at the nazified mass of the population, which technically cannot be subjected to direct punishment as war criminals,” stated ria Novosti.

They write that “besides the elite, a significant part of the masses of the people, who are passive Nazis, are accomplices to Nazism. They have supported the Nazi authorities and indulged them. … The just punishment for this part of the population is possible only as the bearing of the inevitable hardships of a just war against the Nazi system.” Is that what we’re seeing around Kyiv? The “just punishment” of the general population?

And so local government officials and their supporters are among the dead. In the town of Motyzhyn, Mayor Olga Sukhenko, her husband and her son were found in a mass grave of at least 20 civilians. Her fingers and arms were broken, and other bodies showed signs of torture.

Two thoughts came to my mind, looking at all this carnage. The first is that the Bible certainly gave us valuable insight about Vladimir Putin. In 2017, Trumpet editor in chief Gerald Flurry produced a booklet titled The Prophesied ‘Prince of Russia,’ explaining how the Bible prophesied the role Vladimir Putin would play in world events.

Those quotes stood out to me because that wasn’t obvious at the time. It is estimated that Stalin killed at least 20 million people. In 2017, it was clear Putin was evil—but that evil?

Even in 2017, if you looked at what Putin had done in places like Chechnya, the evidence was there. But can there be any denying the accuracy of Mr. Flurry’s statement now? Yesterday, the Daily Mail described the carnage around Kyiv, writing: “Survivors emerging from basements after weeks underground told of summary executions, sexual violence and terror not seen since Joseph Stalin’s Soviet rule of terror in the 1930s.”

My first reaction to all these reports was to deliberately ignore them for as long as I could. I didn’t want to know about them. But then a scripture came to mind: “Thine heart shall meditate terror” (Isaiah 33:18).

“How much time do you meditate on terror?” he asked.

We may not want to think about these things, but, as Mr. Flurry said, “God does, and He says you’d better meditate on it. You’d better see how bad it really is.”

We have proclaimed for years that Britain and America will go into captivity. Many have thought that impossible—that modern, sophisticated nations don’t get invaded and occupied. Ukraine should be a wake-up call; this is what captivity looks like.

God gave His Old Testament prophets visions of what would soon come. They were not pleasant. Habakkuk wrote, “When I heard, my belly trembled; my lips quivered at the voice: rottenness entered into my bones, and I trembled in myself, that I might rest in the day of trouble: when he cometh up unto the people, he will invade them with his troops” (Habakkuk 3:16). He didn’t enjoy seeing it. But he needed that vision.

We can gain a sort of “vision” of these events by looking at Ukraine.

But we cannot mediate only on terror. If you look only at what is happening in Ukraine, you will quickly become depressed. That same passage in Isaiah 33 goes on to tell us: “Look upon Zion, the city of our solemnities: thine eyes shall see Jerusalem a quiet habitation, a tabernacle that shall not be taken down; not one of the stakes thereof shall ever be removed, neither shall any of the cords thereof be broken” (verse 20).

We must meditate on terror—see the real evil in this world. But we must also see where it is leading. This is describing a vision of an eternal Jerusalem, which will never be destroyed. It’s the same vision of new Jerusalem described in Revelation 21, which contains hope beyond anything man can imagine.

This vision is how Habakkuk could describe terrifying destruction in one verse, and then in the next verse say, “Yet I will rejoice in the Lord, I will joy in the God of my salvation” (Habakkuk 3:18).

Meditate on terror in this context, and it will have a positive effect. In that lecture, Mr. Flurry said doing so will “motivate you to turn more people to righteousness. You’re going to say, ‘Oh, God, help me to clean up this filthy, filthy, vile world that we live in, depraved people that have minds like the devil!’”

We can learn a lot about meditating on the terror in Ukraine. It reveals the evil within mankind and in ourselves. It shows our need for a Saviour. Who really believes there is any solution to this on the human level? Who is going to stop Putin from doing whatever he wants? He has nuclear weapons—you can’t fight Russia without wiping out mankind. The United Nations can’t do anything; Putin’s Russia sits on the Security Council and can veto anything it likes. This evil will not be stopped, and it’s only going to get worse.

Meditating terror shows us the need for a new world—one led by God, not by man. It’s a world that we can have a role in setting up right now.

If you want to understand more about Vladimir Putin and his role in the terror of end-time world events, read our free booklet The Prophesied ‘Prince of Russia.’ But an even more important book to read is The Eternal Has Chosen Jerusalem. That will give you the vision of hope you need to stay positive in a world increasingly full of terror.