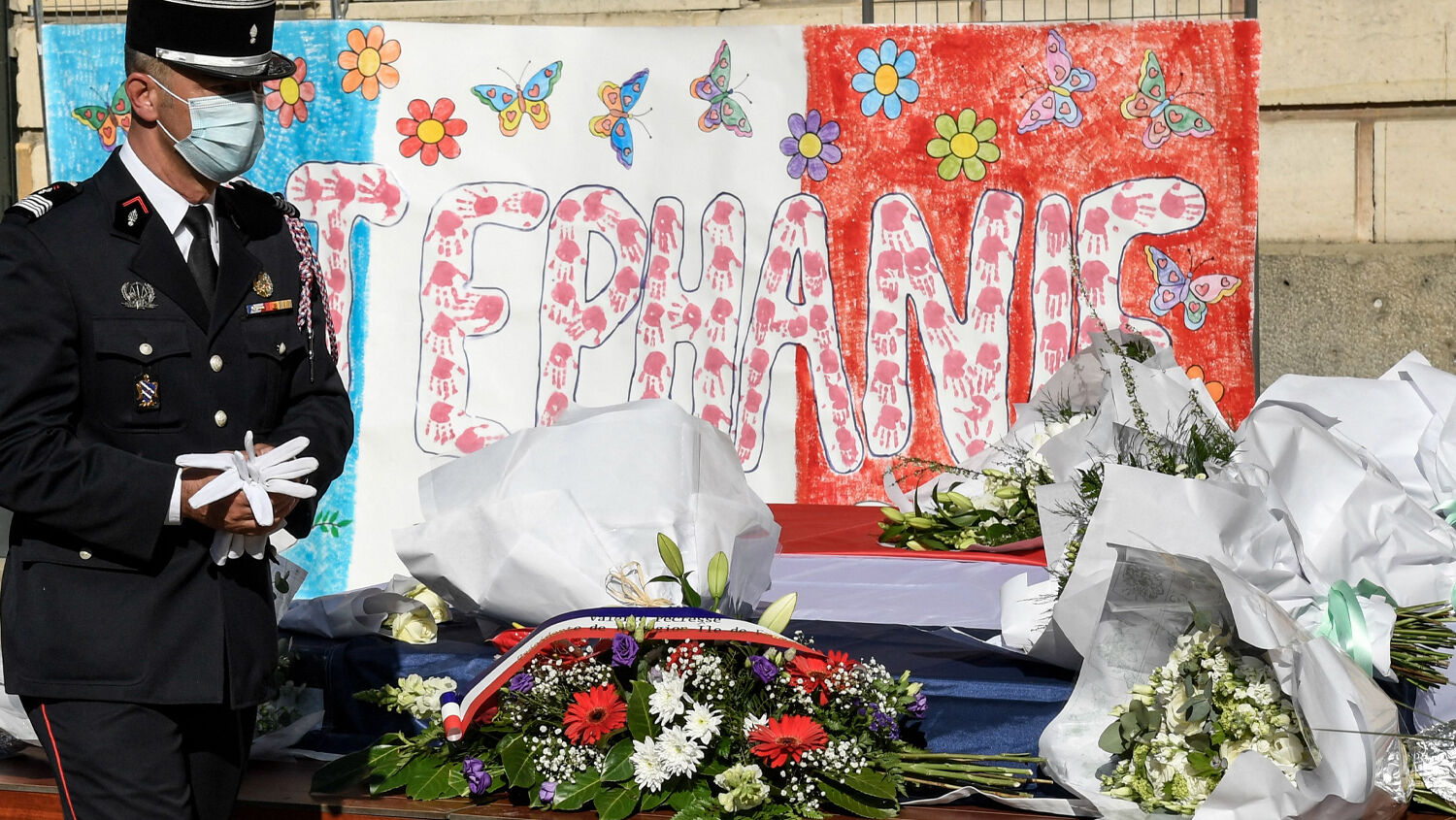 A policeman pays his respects at a tribute to Stephanie Monferme.
BERTRAND GUAY/AFP via Getty Images

A fatal stabbing at a police station keeps the French on edge.

A terrorist fatally stabbed a woman in a police station in the French town of Rambouillet, an outer suburb of Paris, on April 23. Jamel Gorchene, a Tunisian man in his mid-30s, murdered Stéphanie Monfermé, a 49-year-old administrative assistant at the station. The mother of two was coming out of the police station to put money in a parking meter. Gorchene followed her inside the station and proceeded to stab her. A police officer shot Gorchene dead.

The attack is classified as an Islamic terrorist attack for several reasons. Gorchene shouted “Allahu Akhbar!” (“Allah is great!”) right before the attack happened. Evidence on his phone shows he watched videos of pro-jihad songs immediately before the attack. Gorchene surveyed the police station beforehand in preparation, showing premeditation. Gorchene’s father said he “adopted a rigorous practice of Islam,” according to Jean-François Ricard, head of France’s National Terrorism Prosecution Office.

Gorchene entered France illegally in 2009. He stayed in the country without a permit for a decade before obtaining one in 2019. He has the same Tunisian hometown as Mohamed Lahouaiej Bouhlel, the terrorist who murdered 86 people in Nice in 2016.

French President Emmanuel Macron tweeted: “She was a police officer. Stéphanie was killed in her police station in Rambouillet, on the already hurt lands of Yvelines. The nation stands alongside her family, colleagues and law enforcement. In the fight against Islamist terrorism, we will not give up.”

France may not give up fighting radical Islam, but it is getting weary. In an interview with the French weekly Le Journal du Dimanche, French Interior Minister Gérald Darmanin explained the increasing difficulty in combating jihadism in France. “We are now dealing on our soil with isolated individuals, increasingly young, unknown to the intelligence services before their act, and without necessarily any link with established Islamist networks,” he said. “Their systematic use of the Internet and social networks rather than traditional telephone means makes it difficult to locate them.”

Since last autumn, France has suffered repeated Islamic terrorist attacks. Last September, a Pakistani immigrant attacked two people with a meat cleaver outside of the former offices of Charlie Hebdo magazine. On Oct. 16, 2020, an 18-year-old Chechnyan refugee beheaded teacher Samuel Paty. On October 30, a Tunisian migrant, who had been in France for roughly a month, killed three people in a church in Nice.

Because of these attacks, France has since been in an ongoing state of emergency. The French people are getting tired. What are they going to do about it?

Next year is France’s presidential election. Since last year, far-right candidate Marine Le Pen has been the frontrunner in the polls. Macron hasn’t been trailing her by much. But with each terrorist attack, many French get more and more fed up with the way Macron is running things. Le Pen lost to Macron last election. Will the French decide a role reversal is in order next time? Former editor for the French daily Le Monde Alain Frachon said that “Marine Le Pen does not have to say anything” to increase in popularity. “Each time France is hit by terrorism, the extreme right benefits.”

How many more terrorist attacks will it take to give the far right the presidency? And how far will Macron go to keep France safe and himself in office?

In November, he outlined his plans of an EU-wide Interior Ministry to combat terrorism. His plan envisions creating a centralized police force regulating inter-EU migration. Brussels, rather than individual member states, would control internal borders. So far, little has progressed beyond talk.

Earlier this year, the French legislature voted on the controversial “separatism bill.” The bill aims at attacking institutions, like schools and mosques, that promote radical Islam. Those on the left condemned it as Islamophobic. The right said the law didn’t go far enough in countering terrorism.

Politicians are attacking Macron iver the latest attack, as well. In an April 18 interview with the French daily Le Figaro, Macron stated that he wanted to guarantee “the right to a peaceful life” for the French. After the Rambouillet attack, conservative politician Guillaume Peltier criticized the president on Twitter. He mocked Macron’s claim of giving the French “the right to a peaceful life.” He branded Macron’s security policy as an “inexcusable renunciation of courage and action.”

To improve his approval ratings, Macron may become even more hard-line against radical Islam.

Paris is supposed to be one of the great cities of the Western world, a symbol of prosperity and culture. Yet many Parisians feel their security situation is closer to Baghdad or Beirut than any affluent Western city. They’re getting fed up with it. And it won’t take long for French society to crack and wage a heavy counterattack against radical Islam.

Regardless whether Macron or Le Pen wins the election, we can expect Paris to ramp up the pressure against radical Islam.

Where will this ramped-up pressure take France?

“For years, France has refused to confront radical Islam as it grew within its borders,” we wrote in the January 2021 Trumpet issue. “Now the government is strengthening itself to confront that problem. But aspects of the new approach point to a new authoritarian direction for the country.”

France prides itself on its secular, republican values. Many look at the values of the French Revolution—liberty, democracy, equality—with pride. (The revolution didn’t necessarily live up to those values, but that’s a subject for a different article.) But a barrage of Islamist terror attacks are forcing the French to reconsider certain societal ideals. Ideals like what role religion should play in society. Or how much say the government has over personal belief.

The end results of this are going to lead France down a road most aren’t expecting.

To learn more, please read “Liberté, Égalité, and Down With Muslims!”