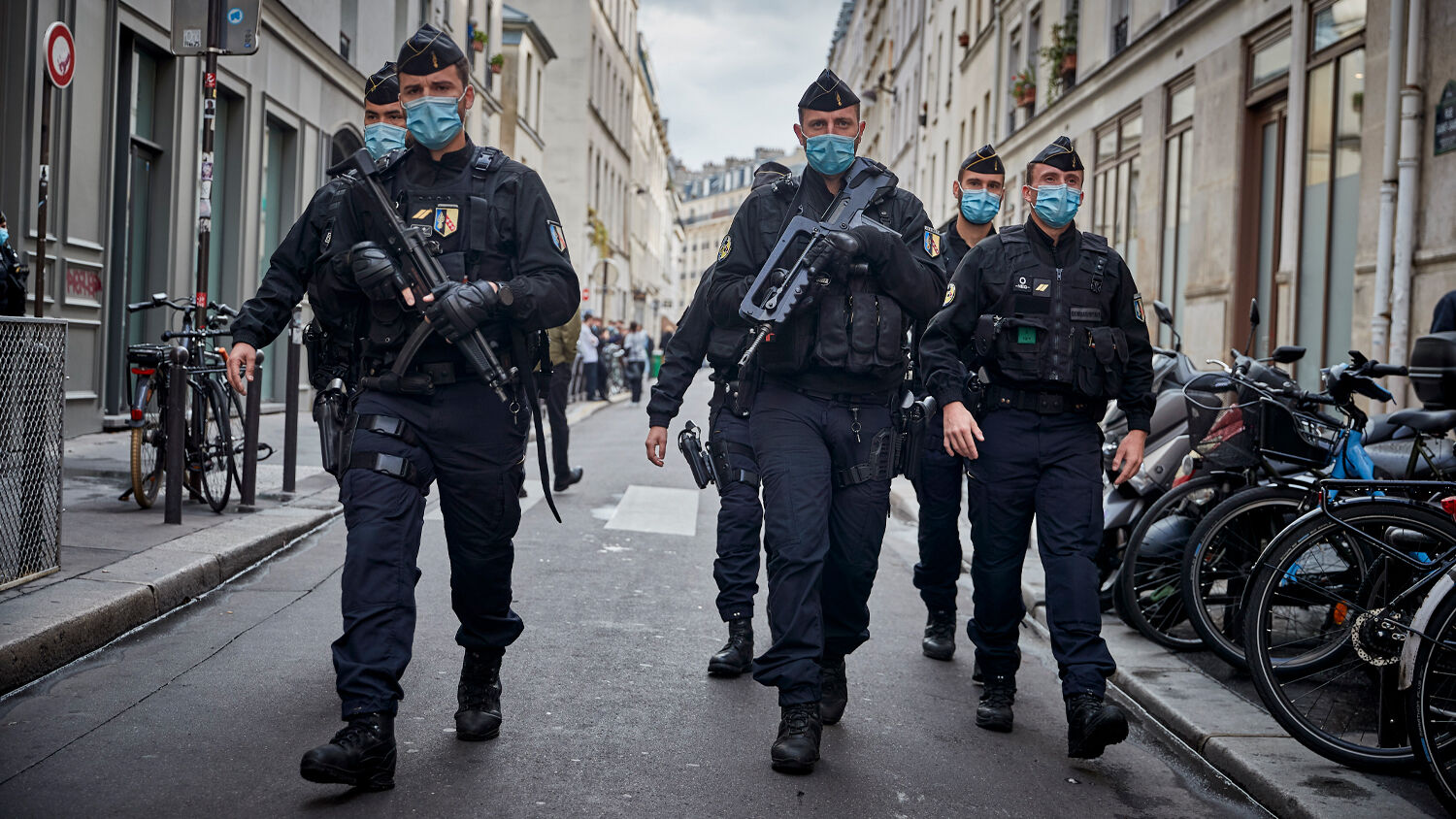 Armed police secure the area around the former Charlie Hebdo headquarters, the scene of a terrorist attack in 2015, after two people were stabbed on September 25 in Paris, France.
Kiran Ridley/Getty Images

As old societal problems resurface, what will France’s response be?

A Pakistani immigrant mauled two people with a meat cleaver outside of the former offices of the French satire magazine Charlie Hebdo on September 25. The attacker, an 18-year-old who immigrated to France three years ago as an unaccompanied minor, stated that he was motivated by Charlie Hebdo republishing a controversial caricature of Mohammed on its front cover. The caricature was originally published in 2015. The September 25 attack came as 14 suspects in the 2015 Charlie Hebdo terrorist attacks are on trial.

Although the assailant had not been under investigation for terrorism suspicions, French Interior Minister Gerald Darmanin stated that this was “clearly an act of Islamist terrorism.” The two victims, who work for the press agency Premières Lignes, survived the attack and are in serious but not life-threatening condition.

Republishing the Mohammed caricature has caused quite a stir among many; Charlie Hebdo has received threats from al Qaeda because of its decision. Marika Bret, the magazine’s head of human resources who has lived under security since 2015, has had “precise and detailed threats” given to her guards and has since had to leave her home due to the republication.

This comes on the heels of another attack, this time on French foreign aid workers in a wildlife sanctuary in the West African nation of Niger in August. Six French citizens, plus a driver and a guide, were murdered in what is suspected to be a terrorist attack, prompting an investigation from France’s anti-terrorism prosecutor.

While large-scale terrorist attacks aren’t nearly as big a problem to French society as they were a few years ago, one has to wonder how much of a beating France can take from terrorism. A perceived mismanaging of the terror crisis from a few years ago brought down the presidency of François Hollande, who declined to seek a second term in office due to unpopularity. The subsequent French presidential elections in 2017 resulted in two political outsiders from non-mainstream parties becoming the front-runners; one of them is the current president, Emmanuel Macron.

In a recent speech at the United Nations General Assembly, President Macron highlighted the current initiatives taken by France to combat terrorism as well as the country’s future outlook. He affirmed France’s “fight against terrorism wherever it is necessary,” stating that “France will always be highly active in the Levant,” the region of the Middle East that includes Syria, Lebanon and Israel. He also highlighted how “France is heavily involved [militarily] in the Sahel,” an African region just south of the Sahara Desert with a sizable Muslim population.

Compared to his predecessors, President Macron has taken quite a strong stance against radical Islam, both domestically and internationally. In the aftermath of the series of terrorist attacks beginning in 2015, France went through what seemed like a never-ending state of emergency; once Macron was elected in 2017, he formalized some of the measures of the state of emergency into normal French law. Later that year, a law endorsed by President Macron passed the French National Assembly that gave the police powers of search and seizure with more limited involvement of the French courts as well as the power to arbitrarily shut down “places of worship in which are disseminated the writings, ideas or theories that provoke violence, hatred and discrimination.” Civil liberties activists are concerned that the law tramples upon fundamental human rights and may be designed to marginalize the French Muslim community at large.

Abroad, France under Macron has contributed troops to the international coalition to defeat the Islamic State. In the aftermath of the recent explosion in Beirut, he has been pressuring the Lebanese government, currently dominated by the Iranian-affiliated terrorist organization Hezbollah, to enact reforms in exchange for a financial bailout. In his UN speech, President Macron has publicly called out Iran for breaking the 2015 Joint Comprehensive Plan of Action (jcpoa).

Given this recent history, it is possible that the latest terrorist attacks may lead to an even more confrontational approach to radical Islam from the French government.

France, while historically Catholic, has in the modern era prided itself on the secularization of its society. But the nation has recently been reexamining its relationship with its traditional religion. This was most clearly seen in the 2019 fire at Notre Dame Cathedral. Faced with the problems of assimilating a significantly Muslim immigrant population—a population increasingly at friction with the native French over issues like radicalization—France is increasingly examining what role religion should have in society.

This is not the first time that France has gone through a period of secular backsliding. Historically, the Protestant Reformation hit France particularly hard. The country was stuck in a civil war for many years between the Huguenots, French Protestants looking for greater freedoms, and Catholics, who wanted to snuff out the “heretical” movement. In 1598, King Henry iv enacted the Edict of Nantes, which provided toleration and emancipation for the Huguenots within French society. The edict gave Huguenots economic and political freedom. You could say that the French were experimenting with secularization in society.

However, succeeding French rulers did what they could to undermine the Edict of Nantes. Prime Minister Cardinal Richelieu partially revoked the edict; in 1685, King Louis xiv annulled it completely, which pressured hundreds of thousands of Huguenots to emigrate from France.

Could France experience something similar today?

To answer this question on religion, we must look at what billions around the world regard as the source of their religion: the Holy Bible. The writings of the Bible are just as relevant today as they were when originally written. Surprising as it may sound, the Bible has a lot to say about modern-day France.

Consider the book of Daniel. Chapter 11 describes the “time of the end,” when a “king of the north” wages war against a pushy, provocative “king of the south”—a king whose domains include such lands as Egypt and Libya—lands in the Muslim world today (verses 40-43). We prove in our free booklet The King of the South that the king of the south is radical Islam, led by Iran, while the king of the north is the European Union, soon to morph into the final resurrection of the Holy Roman Empire. Germany will be the dominant force in the king of the north, but France—one of the most influential and integral parts of the EU today—will be part of it as well.

Another prophecy featuring France is found in Genesis 49. The patriarch Jacob, whose name God changed to Israel, revealed to his sons on his deathbed what their descendants would be doing in the “last days” (verse 1). Few people realize it today, but the descendants of Israel are not exclusively the Jews; most of the descendants of Israel migrated to Northern Europe anciently and now compose many West European nations (for proof of this, request a copy of our free book The United States and Britain in Prophecy, by Herbert W. Armstrong). Genesis 49:3-4 describe France’s patriarchal ancestor, Reuben. Reuben’s descendants are “unstable as water,” which is an apt description of French society today, reeling from constant terrorist attacks.

Trumpet editor in chief Gerald Flurry has had a lot to say about France and the nation’s prophetic role in modern times. Most recently, he made a series of television programs about France today. I encourage you to watch Part 2 of the series to learn more about the direction France is taking today. France has been one of the great powers of the world for centuries, and it will once again play a major role in world events in this modern day—a role that will affect every person on the planet. To learn more about this, please request our free reprint article “France in Bible Prophecy.”