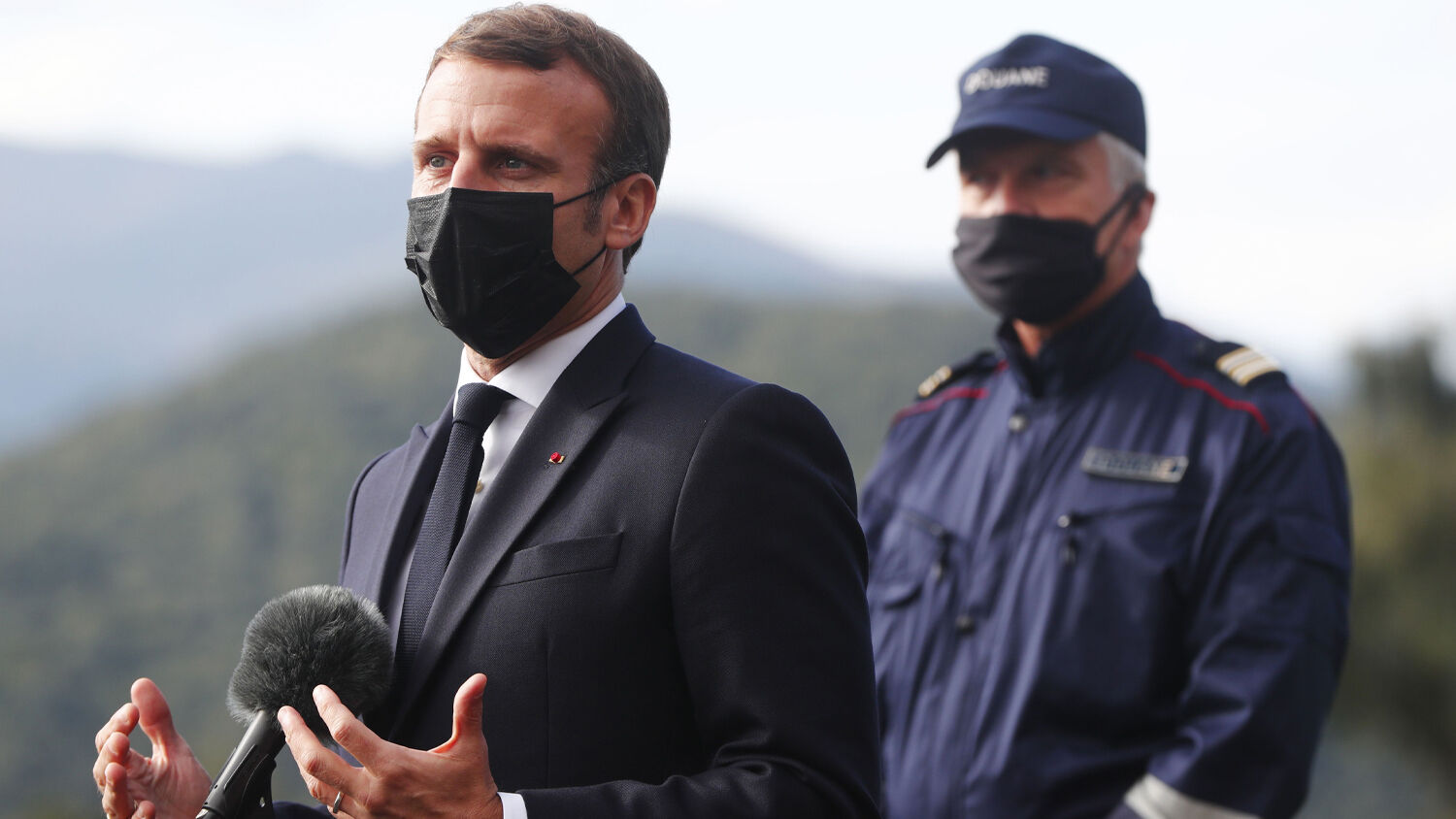 French President Emmanuel Macron speaks to the press during a November 5 visit to the border between France and Spain; he announced that the number of border guards would be doubled to 4,800 from 2,400 “because of the worsening of the threat” from terrorism.
GUILLAUME HORCAJUELO/POOL/AFP/Getty Images

France is not letting its terrorist crisis go to waste.

French President Emmanuel Macron wants to remake Europe’s free border area in the wake of recent terrorist attacks in France and Austria. He said on November 5, while giving a speech on the Spanish border, that Europe needs a real external border security police.

Macron’s speech follows after the recent attacks in Nice and Vienna, in which terrorists were able to use the Schengen Area’s open borders to organize their attacks. The Nice attacker originally came into Europe via Italy and used Schengen to pass into France. The Vienna attacker, who was born in Austria but of Albanian descent, crossed over into Slovakia to purchase his ammunition.

This isn’t the first time Macron has made such demands; he made similar calls in a letter he published last year ahead of the EU parliamentary elections.

Macron has yet to state the exact details of his security plan, but he has given a good indication of the direction he intends to take both the EU and the Schengen Area. He has doubled the number of anti-terrorism personnel mobilized in France from 2,400 to 4,800. This includes regular police officers, gendarmes (military men with law enforcement duties) and the army. He is also deploying four “mobile units” along France’s border with Spain. He specifically told the local mayor in his speech that he “will see [his] daily life change [with France’s new approach to anti-terrorism], because it’s an action which [France] must profoundly intensify.”

Macron intends on making his proposals a priority at a coming summit of EU leaders scheduled for December 9.

Currently, 22 of the 27 EU member states are part of the Schengen Agreement, as well as Switzerland, Liechtenstein, Norway and Iceland. Currently, the Schengen Area has eliminated all border checkpoints between member areas, even to the point where air travel is considered domestic (though members can arbitrarily decide to set hard borders up temporarily for emergencies, such as during the covid-19 crisis). However, Macron seems to imply in both his speech and his letter that borders need to be hardened between member states to some degree, enough to keep an eye on who is travelling where and possibly refuse admittance to certain people.

By calling for an EU-wide program rather than one limited to the Schengen Area, Macron seems to be indicating that non-Schengen members within the EU, like Ireland and Cyprus, would also fall under its jurisdiction, as well as Schengen members outside of the EU, like Switzerland, a country the EU has been eyeing for a while to add to its realm.

Macron is basically calling for an EU-wide interior ministry capable of controlling both freedom of movement and the national borders of its member states.

Having national borders firmly controlled by national governments is one of the most important aspects of national sovereignty. Macron is seeking to turn the EU from an international organization of countries mutually consenting to shared rules into a superstate made up from non-sovereign provinces. The EU has been heading this direction for some time with the implementation of the euro currency and the dissolution of independent trade ministries in its member states. A common EU interior ministry with overarching control over national borders would make this transformation official.

And Macron has indicated that the French government isn’t alone in desiring to implement his suggestions. A French government official listed Germany, Austria and the Netherlands as possible supporters of Macron’s proposed measures. German Chancellor Angela Merkel has supported ideas for reinforced monitoring at the Schengen Area’s external borders with a more detailed screening of who is entering and exiting the bloc. EU Commission President Ursula von der Leyen has also commented on strengthening Europol’s ability to access information about who is entering and exiting the bloc, as well as making Eurodac—the program for fingerprinting all asylum seekers and regular migrants into the EU—more thorough.

Von der Leyen also recently discussed with Macron, Merkel and Austrian Chancellor Sebastian Kurz about the need for the EU to have a heavier role in censoring the Internet regarding hate speech and online content linked to terrorism. The four EU leaders, as well as European Council President Charles Michel, also discussed the idea of setting up a common EU training program for imams.

It is clear why many people and leaders in Europe want a major overhaul of their security systems; Europe for years now has been battered by Islamic terrorist attacks, and the current measures do little to solve the problems. But where is this leading?

The EU treating its individual members’ borders as one continuous border structure to be monitored by Brussels rather than the member states only takes Europe further down the road to becoming a sovereign entity in its own right. A centralized Europe with much more control of its own borders is much closer to becoming a superstate. And this transformation becoming official would rightfully turn the EU into a new world superpower. It already has, collectively, the second-largest economy in the world—larger even than China’s (and that’s taking into account Great Britain’s departure from the Union)—and the third-largest population in the world. It has one of the top 10 strongest currencies in the world, and its space program is considered a leader in the field. EU peacekeeping troops are stationed around the world from West Africa to Central Asia.

This all means that, if the EU formally centralizes under one overarching government, it will, in the words of Emmanuel Macron to the mayor of Le Perthus, “see your life change.”

The Bible actually has a lot to say about what a united Europe would look like. The New Testament was written during the time of the Roman Empire, a bloody empire that conquered most of the known world. The book of Revelation talks about that empire from the first century a.d. onward. Chapter 17 is pivotal in this regard.

Rome fell in a.d. 476, but men have been trying to restore that empire ever since. Revelation 17 describes these restorations as “a scarlet coloured beast, full of names of blasphemy, having seven heads and ten horns” (verse 3). Verse 10 reveals that each head represents seven consecutive “kings” who take on this project of reviving the globe-spanning rule of the Roman Empire. Verses 12 and 13 reveal that the last of these “kings” would be a conglomeration of 10 individual kingdoms within the general territory of the old Roman Empire, combining their individual might into one superstate.

We believe that the latest events in France are a step toward that final superstate. Once it comes on the scene, it will shake the world like it has never been shaken before. To learn why, and what it means for you personally, request our free book The Holy Roman Empire in Prophecy.