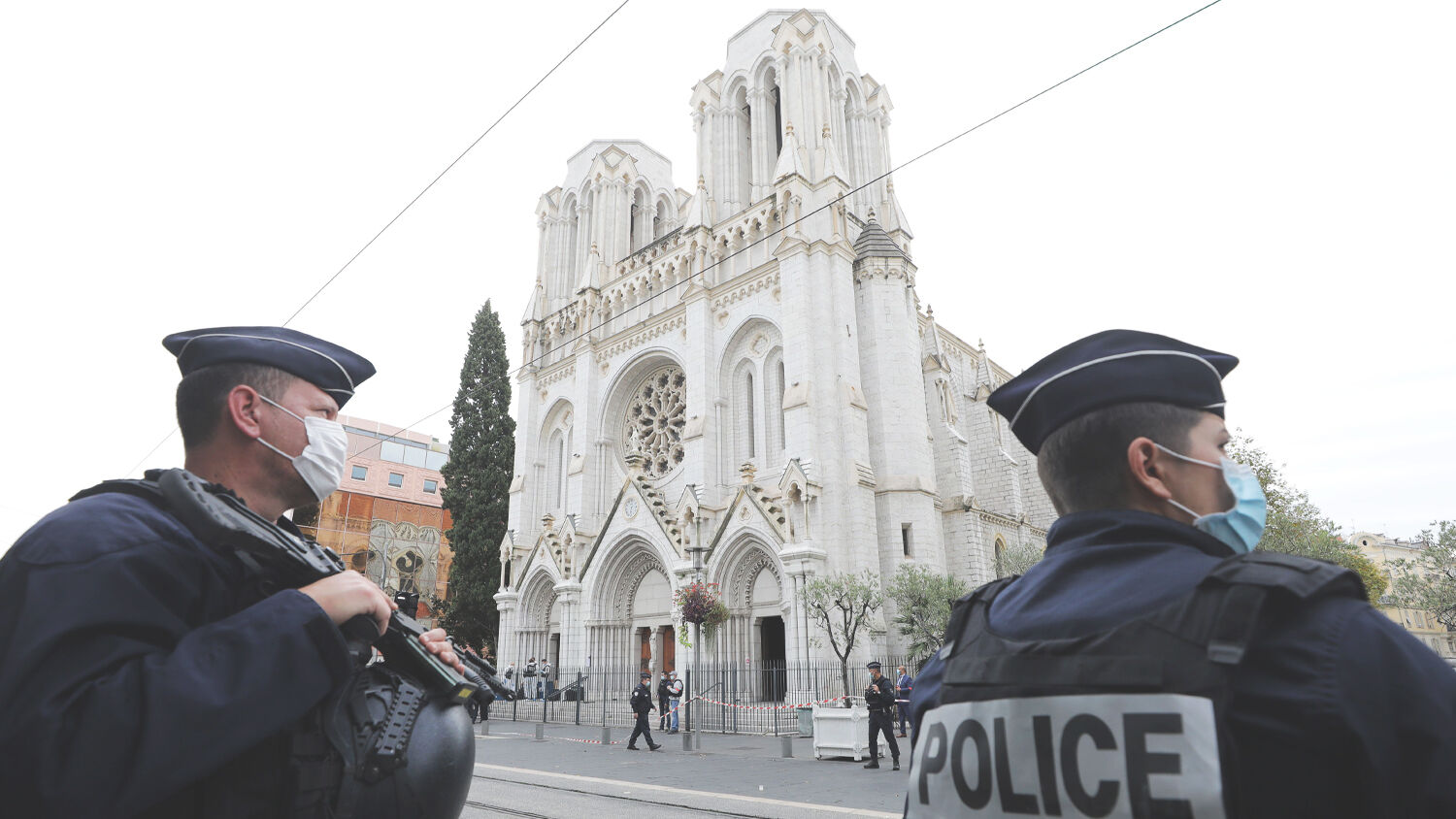 French policemen stand guard at the site of a knife attack at the Basilica of Notre-Dame de Nice on October 29.
ERIC GAILLARD/AFP/Getty Images

How long can the French endure terrorist attacks before they snap?

Three people were killed in a terror attack in Nice, France, on October 29. A man wielding a footlong knife and repeatedly shouting, “Allahu akbar!” made an assault inside the Basilica of Notre-Dame de Nice, the largest church in the city, before the morning mass. An older woman was “virtually decapitated” while the church’s sacristan had his throat slit. Another woman was repeatedly stabbed and managed to escape, but later died from her injuries.

The assailant, identified as Brahim Aouissaoui, is only 21 years old. A Tunisian national, he has been in France for roughly one month. He entered the European Union via Italy on September 20, most likely as an illegal migrant; the only identifying documents the man carried was a form from the Italian Red Cross. According to French anti-terrorism prosecutor Jean-François Ricard, Aouissaoui entered Nice that morning.

This is only the latest Islamic terrorist attack on French soil. On September 25, a Pakistani immigrant attacked two people with a meat cleaver outside of the former offices of the Charlie Hebdo magazine in Paris. An 18-year-old Chechen refugee decapitated a history teacher in a Paris suburb on October 16. The same day as the Nice attack, a man knifed a guard at a French consulate in Saudi Arabia; the guard’s injuries are not life-threatening.

In 2016, another terrorist attack rocked Nice when a truck driver mowed down the city’s famous beach, the English Promenade, killing 87 people (including the perpetrator).

The attack in Notre-Dame de Nice has sent France to its highest terror alert level. French President Emmanuel Macron has mobilized the French military and stationed 7,000 soldiers throughout the country to protect schools and religious buildings.

And it isn’t just the French who are in an uproar. Many Italian politicians are furious that the terrorist was able to come into Europe via Italy. Matteo Salvini, former Italian deputy prime minister and leader of the largest opposition party in Italy’s Chamber of Deputies, the far-right Lega Nord, has called for the resignation of the Italian interior minister if the reports that Aouissaoui came to Europe through Italy are confirmed.

For years, France has had to deal with the problem of an increasingly unassimilated Muslim population—the largest in Western Europe—within its borders. While France is historically Catholic, secular republican values have dominated most of modern French politics. But the latest string of jihadist attacks is causing people to reexamine their relationship with religion. The fact that this attack occurred in a Catholic church will certainly weigh heavily on people’s minds.

In a speech immediately after the attack, President Macron stated:

I want to express, first and foremost, the nation’s support for the Catholics of France and elsewhere. After 2016, with the killing of Father Hamel [a Catholic priest slayed in a terrorist attack in his own church], it is the Catholics of our country attacked once more, and just before All Saints’ Day. We are at their side in order that religion can be freely exercised in our country. People can believe or not believe, all religions can be practiced, but today the nation is beside our Catholic compatriots.

Other French politicians were more aggressive with their rhetoric. Nice Mayor Christian Estrosi said: “Enough is enough … it’s time now for France to exonerate itself from the laws of peace in order to definitively wipe out Islamo-fascism from our country.” Mayor of Cannes David Lisnard issued a call for a “fierce and cold determination to eradicate this [Islamist] plague.” French Interior Minister Gérald Darmanin stated that France is “in a war against an enemy that is both inside and outside.”

It’s hard not to interpret these statements as a call to arms and direct, forceful action.

The Islamic world is becoming increasingly hostile to France and President Macron, in response to his anti-Islamist rhetoric in recent days. Recently, the former prime minister of Malaysia, Mahatahir Mohamad, announced online that he believed “Muslims have a right to be angry and to kill millions of French people for the massacres of the past. … Muslims have a right to punish the French.”

The escalating tensions show that France—and Europe in general—is headed for a clash of civilizations with the Islamic world.

This appalling crime was not only a murderous assault on the innocent, but also a direct attack on Christian civilization. The target was deliberately chosen because the French church represents the enemy and so is loathed by the zealots who want to terrorize the West into submission.

This isn’t the first time France and the Islamic world have butted heads in a titanic struggle. The a.d. 732 Battle of Tours-Poitiers was fought between Charles the Hammer, king of the Franks, and the Muslim armies of the Umayyad Caliphate marching into southern France via Spain. The caliphate, which stretched from Central Asia to the Iberian Peninsula, had the goal of Islamizing Catholic Europe. All that stood in the way of this goal was Charles the Hammer and his troops; the Franks successfully kept the Muslims at bay, chasing them out of France.

A descendant of Charles the Hammer, Charlemagne, was crowned as the first Holy Roman Emperor in a.d. 800. He is credited as the founder of an empire that, in a reversal of the Umayyad Caliphate’s goals, tried to convert the entirety of Europe by the sword to Catholic rule. Centuries after Charlemagne, the Holy Roman Empire helped launch the bloody Crusades to Catholicize the Middle East.

Your Bible predicts another clash between a “caliphate” and the Holy Roman Empire. And this clash will be bigger and bloodier than any before.

Allow Trumpet editor in chief Gerald Flurry to answer: “Since the early 1990s, we have believed and taught that Iran would lead the radical Islamist world and be the king of the south” (The King of the South; emphasis added).

The word “push” in Daniel 11 implies a provocation. Increasingly common and gruesome terrorist attacks in the heart of Europe are quite provocative. And Europe will not continue to sustain such terrorist attacks for much longer before it decides to deal with the “enemy that is both inside and outside” with the speed and ferocity of a “whirlwind.”

Whether it is the Battle of Tours-Poitiers, the Crusades or the Ottoman invasion of Europe, Catholic Europe and the Muslim Middle East have always been at loggerheads—and they’re going to be at loggerheads one more time. To learn more, request Mr. Flurry’s free booklet The King of the South.