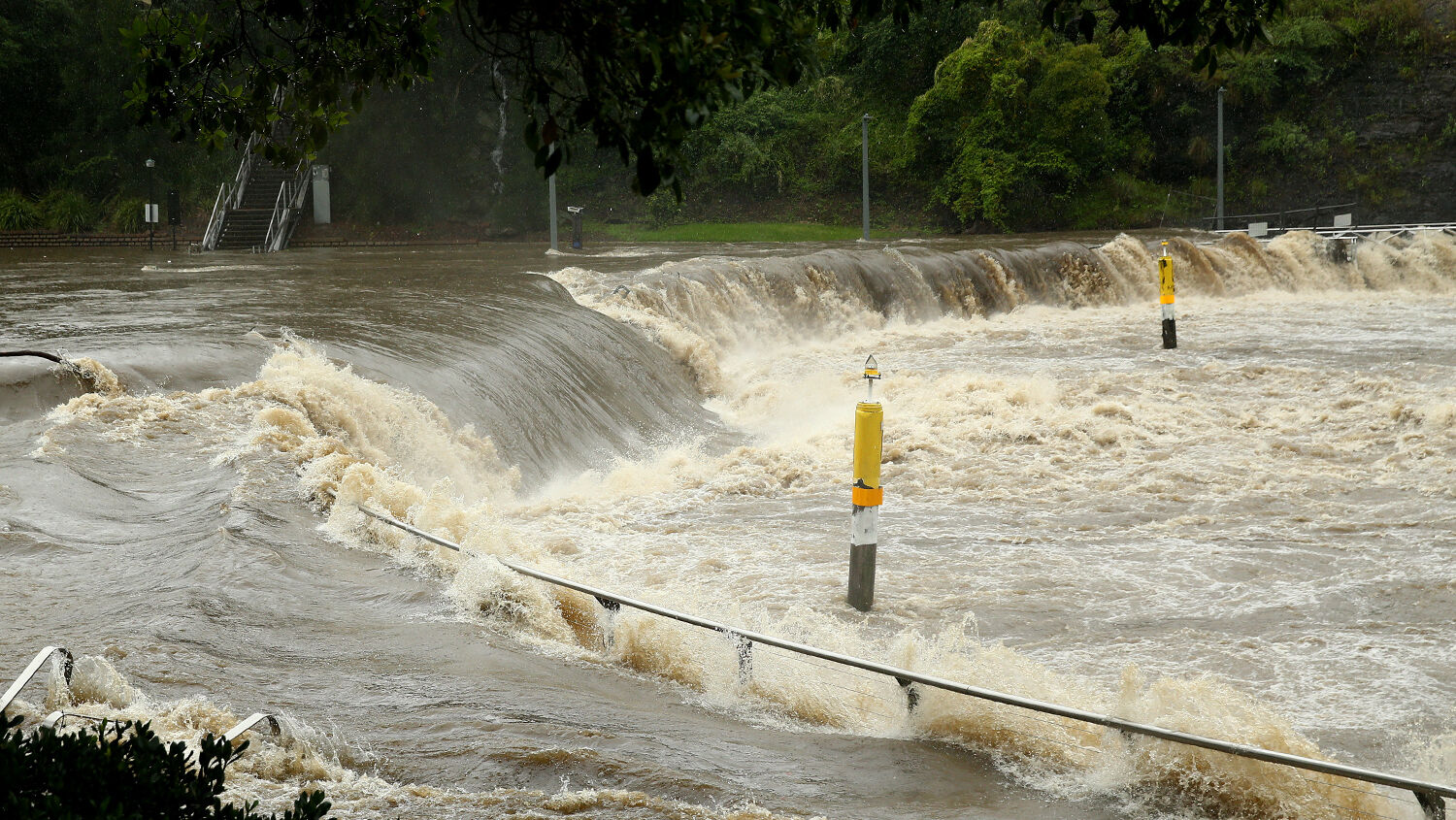 Australia is battered with deluges of biblical proportions.

Eastern Australia was hit with a storm system starting March 18. The storms caused catastrophic flooding, submerging parts of New South Wales with water levels around 3 feet high. Sydney has been hit especially hard. The system even caused a tornado to hit a western Sydney suburb, destroying many homes. The city’s overflowing Warragamba Dam is spilling water equivalent to the volume of Sydney Harbor every day.

The storm reached “all the way from southeast Queensland down to the New South Wales-Victoria border,” said senior risk scientist Thomas Mortlock to the bbc. “It’s an area that spans, exceeding 1,000 kilometers.” By comparison, according to Mortlock, if that system were imposed on Europe, it would stretch from Scotland to Switzerland.

Thankfully, very few people have died. But it is forcing thousands to flee from their homes. Altogether, roughly 10 million people—almost half of the country’s population—have been affected.

The floods are also affecting local wildlife. The rising water levels are forcing many smaller creatures to look for higher ground—including spiders. Many worry that this could include populations of Sydney funnel-web spiders, a highly venomous and aggressive species.

The floods are also affecting areas further inland. The famed landmark Ayers Rock (also known as Uluru) received enough of a torrential downpour to cause multiple waterfalls to form. This is a rare phenomenon.

New South Wales Premier Gladys Berejiklian said she didn’t “know any time in state history where [they] have had these extreme weather conditions in such quick succession in the middle of a pandemic.” She said in another instance: “We were hoping it will only be a 1-in-20-year event. It looks like a 1-in-50-year event.” She later called the storm a “1-in-100-year event.”

A little over a year ago, much of Australia was a fiery inferno. As of January 2020, over 13 million acres of land had been burned. Very few people lost their lives, but over a billion animals perished. The fires didn’t last long after that—due to flooding similar to what’s happening now. Australia went out of the frying pan and into the flood.

Australia is really becoming the “land of plenty” when it comes to weather catastrophes. It brings to mind the words penned by the Prophet Amos, thousands of years ago: “And also I have withholden the rain from you … and I caused it to rain upon one city, and caused it not to rain upon another city: one piece was rained upon, and the piece whereupon it rained not withered” (Amos 4:7).

On March 22, the Sydney Morning Herald chided some of Premier Berejiklian’s language: “It is no longer useful or accurate to describe disasters such as the current floods as 1-in-100-year events. … In only a matter of decades, for example, what has historically been a 1-in-100-year extreme coastal flood will become annual events in most places.”

What’s causing the Australian weather flip-flop? The Sydney Morning Herald blames climate change. But is the answer that clear-cut?

We write in our free booklet Why ‘Natural’ Disasters?:

“Unprecedented” and “record-breaking” disasters are happening at a quickening pace. “History making” events are becoming commonplace!

We need to be concerned!

What is wrong with the weather? You have to have blinders on not to at least be asking the question. Why are these once-in-a-lifetime, where-did-this-come-from, never-before-witnessed calamities piling up on top of one another?

Such catastrophes should in fact challenge our thinking. They force us to contemplate the fragility of man. They demand that we consider some of the deeper questions we can all-too-easily ignore in more prosperous and peaceful times.

Sadly, most people do not glean any wisdom from such events.

Why Australia is experiencing so many weather problems is one of those deep questions.

This is not a political view. We aim to give you God’s view. Our great Creator knows that climate change is not the cause of weather disasters!

God states in Amos 4:7 that He has power over which land gets rain and which gets drought. God has power over the weather! “[T]he Lord hath his way in the whirlwind and in the storm, and the clouds are the dust of his feet. He rebuketh the sea, and maketh it dry, and drieth up all the rivers …” (Nahum 1:3-4). In Leviticus 26:19, God pronounces a curse on the Israelites if they disobey His voice: “I will make your heaven as iron, and your earth as brass.”

In fact, throughout the Bible, God promises blessings for obedience to His law and curses for disobedience. One of those curses is weather disasters.

In 2007, Australia was in a drought that had been ongoing for 10 years. Australian Prime Minister John Howard made a public plea for people to pray to God for rain. The next week, the drought was over. Rain came to Australia. Even as recently as 14 years ago, people in high places saw that bad weather meant that something was wrong spiritually.

But it would be a miracle if anybody in Canberra, or in any government, thought this way today.

It doesn’t mean you, individually, can’t learn this lesson, however.

To learn more, request our free booklet Why ‘Natural’ Disasters?